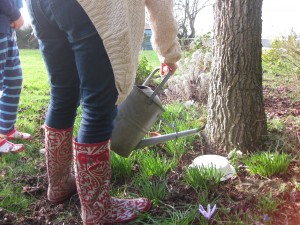 With seven water companies set to introduce hosepipe bans from April, and the Environment agency warning that the drought could spread to other parts of the country, we’ve been regaling the children with our childhood memories of the summer of 1976.

I clearly remember performing a rain dance with my friends on the school field, using washing up water to flush the toilet, and standpipes on the street. The eldest is horrified at the potential effect on her hair washing regime, the youngest is excited that he may not be allowed to have a daily bath.

But when the children saw the Wildlife Aid Foundation’s appeal on behalf of baby animals, they were straight out in the garden to put water out ‘for the hedgehogs’.

Simon Cowell (no, a different one), founder and director of the Wildlife Aid Foundation says that young animals don’t know how to find water when it’s scarce, and can become dehydrated. He says: ‘The very least people can do is to keep an eye open for orphaned wildlife and report any incidents to us here at the Wildlife Aid Foundation. As spring approaches, I would also encourage people to put out shallow dishes of water in their gardens, as this would be a huge help for small animals such as hedgehogs.’

We’ve done that, and are hoping it will help the all of the animals in the neighbourhood, apart from the moles who have been ravaging the back lawn for months. The youngest suggested putting a sign up banning moles from the water dishes, but we had to explain that they don’t see well enough to read.