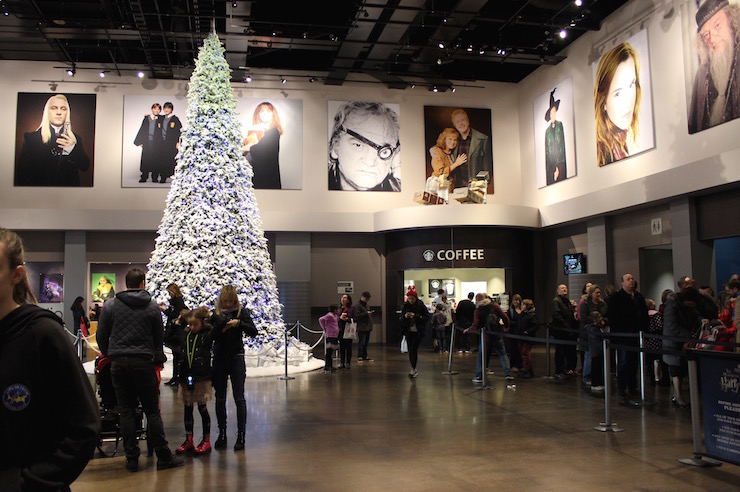 My family loves Harry Potter. It feels like our eldest grew up with him, and the day the Deathly Hallows book came out we had to buy two copies because neither of us could wait to read it. (My husband felt this to be an appalling waste of money and still hasn’t forgiven me 5 years on). The youngest is equally keen, and yearns to go to Hogwarts School.

So when we heard of the new Harry Potter Studio Tour we booked the first slot we could (£83 for a family ticket), which was last Sunday. As we waited to be let in to the tour we filed past the cupboard under the stairs where Harry slept at Privet Drive. We then moved into a dark enclosed room with screens on the walls and a man with a mic who told us the rules of the tour (mobiles to silent, photos only for personal use etc.) and then showed us a short film about the genesis of the Harry Potter films. We were then shepherded into another enclosed room with seats and a cinema screen where we watched a short film about how Harry’s world was brought to life at the studios. I can’t really remember much about the films, apart from the fact that I felt impatient to be allowed to look at things independently.

When this film finished the screen lifted to reveal the Hogwarts entrance hall and the door opened into the Great Hall, complete with York stone floor and fireplace. Around the edges of the Hall were various costumes used in the films, including Cedric’s (played by Robert Pattinson) triwizard tournament outfit. From this point on it became more interesting as we were free from the guide and could look around in our own time. We moved through to the back lot to see an array of original props, costumes and film sets including Dumbledore’s office, where the books lining the walls are actually telephone directories in disguise. We queued for a chance to ride a broomstick and ‘drive’ Mr Weasley’s Ford Anglia, paying £15 for a photo of each, and then moved on to the outside sets, refreshed by a glass of yummy Butterbeer (£2.95, we asked what was in it but the recipe’s secret, apparently). Number 4, Privet Drive seems exactly like a suburban estate house built of brick until you tap it – it’s made of wood. Back inside again, the displays in the Special Effects Department really brought home the high level of craftsmanship used for the films: apparently 6 artists worked for a year on models for the ‘inferi’ which were used for 2 minutes of film. We strolled through Diagon Alley into the Art Department where J K Rowling‘s words were translated into images. The final part of the tour was the model of Hogwarts castle used for filming, and then a touching tribute to the thousands who worked on the films in the form of a room full of wand boxes, each inscribed with the name of an individual worker. We then, inevitably, had to exit through the over-priced gift shop. The youngest wanted to buy something for his sister, who was ill at home, and became very frustrated when we declined all of his request as they were too expensive: £12.95 for a jar of sweets, £24.95 for a wand, for example. We eventually settled on a postcard of Dobby for 95p. I think this is one part of the tour which could improve: it needs a few pocket money items such as pencils and badges.

Gift shop aside, for anyone who loves the Harry Potter books or films, this is a great day out and I’d highly recommend it. We’ll definitely be going back soon.

(I apologise for the boring photo for this post, but I’m not allowed to show any of the pictures I took inside the studios.)