My youngest lives and breathes football. This is positive in many ways – he’s getting fit and learning about teamwork when he plays, he enjoys reading about the sport, loves going to matches with his Dad and actually wants to go to school on the days when it’s his turn to play football at lunchtime. When it comes to the Xbox he has no time for the war games that I can’t bear – all he wants to play is FIFA 13.

However, there’s a side of the game which is not positive in any way, and the issue of racism together with some recent incidents have made me concerned at his passion for the sport 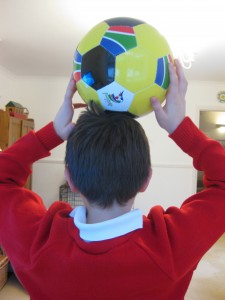 . In November a volunteer Dutch linesman died after being kicked and beaten by several teenage players (the youngest doesn’t know about this, thankfully). In December Manchester United’s Rio Ferdinand was injured by a coin thrown from the crowd. And then there was the behaviour of a ball boy and a Chelsea player last night.

In the match between Chelsea and Swansea a ball boy held on to a ball for too long and Eden Hazard, a Chelsea player, appears to have kicked him whilst trying to getting the ball back. In a statement on the Swansea website Hazard says: “The boy put his whole body onto the ball and I was just trying to kick the ball. I apologise. The ball boy came in the changing room and we had a quick chat and I apologised and the boy apologised as well, and it is over. Sorry.”

It may be ‘over’ for those involved, but it isn’t for children like my son. He talked of nothing else this morning: “Hazard’s a really good player….Sometimes these things are set up, Mum….I could be a ball boy….Hazard should miss three games for that….” and on and on and on. As I dropped him at school this morning the last thing he said to me was: “Can you go on the internet all day today and make sure that ball boy’s alright?”

La Manga Club is a luxury sports resort on Spain’s south-eastern Costa Cálida. It offers kids the chance to improve their football skills on the same pitches where the likes of the Spanish, English and Scottish national teams have trained.

First Choice offers football coaching at all of its holiday villages.

Closer to home, Butlins provides football coaching at all three of its resorts.