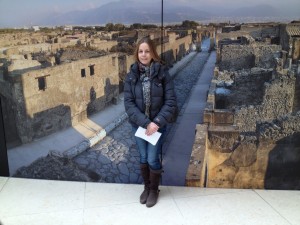 I was lucky enough to attend the press view of the British Museum’s astonishing new ‘Life and death in Pompeii and Herculaneum’ exhibition this week, and I can’t stop talking about it.

The people living around Mount Vesuvius in AD 79 had no idea of its danger and didn’t understand the warning signs that it was about to erupt. So they just carried on as usual and I guess were totally unprepared for their end when it came. Falling ash and stone from the volcano soon cut off all escape routes and then a 400C surge of gas and matter killed everything in its path instantly.

Nearly 2000 years on, the everyday objects preserved in various forms by the disaster and on display at the museum show us the pattern and detail of the lives and homes of those who perished. The exhibition is laid out as a Roman street leading to a house with various rooms. In each room a range of the personal possessions and household items of the people of Pompeii and Herculaneum are displayed in the relevant place. This layout was a complete revelation to me, and the jigsaw of my school Latin lessons and trips to various ancient Roman sites over the years suddenly fitted together and made sense.

For example, in the ‘kitchen’ part of the exhibition there are familiar items such as cooking pots, glass jars and a stone pestle and mortar as well as surprises like the pottery jar for fattening up dormice to eat. (Apparently Romans considered them a delicacy stuffed, rolled in honey and poppy seeds and then baked or fried. I think fried would be better.) In the ‘bedroom’ there’s a baby’s wooden carbonized crib, which still rocks, as well as silver mirrors and pots with traces of cosmetics in them.

I love the way the detail of the exhibition brings out the character of the city’s inhabitants and shows how similar we all are, despite the divide of millennia. There’s a painting of a golden phoenix found outside a Pompeiian bar with the inscription: ‘The phoenix is lucky, may you be too.’ It sounds like a friendly place to go for a drink. There’s a beautiful fresco where, at child height, the shapes of animals have been gouged into the wall: I could so see my youngest doing that. I learnt that Romans would place small silver skeletons amongst the dishes on a meal table to remind everyone to enjoy themselves because death comes to us all. It reminded me of The Specials song ‘Enjoy Yourself, (It’s Later Than You Think)’, which I’ve often said I’d like played at my funeral.

At the end of the exhibition there are some plaster casts of the people who died, including a family with children taking shelter under some stairs. I found it difficult to look at them, the shapes of these people who were powerless to escape their horrible deaths, but I feel privileged to have glimpsed their world. Go and see it, you’ll be amazed.

The family travel lowdown: ‘Life and death in Pompeii and Herculaneum’ is at London’s British Museum until 29 September 2013. Tickets are £15, under 16s are free. There are various events planned at the museum around the exhibition including lectures, workshops and family activities.