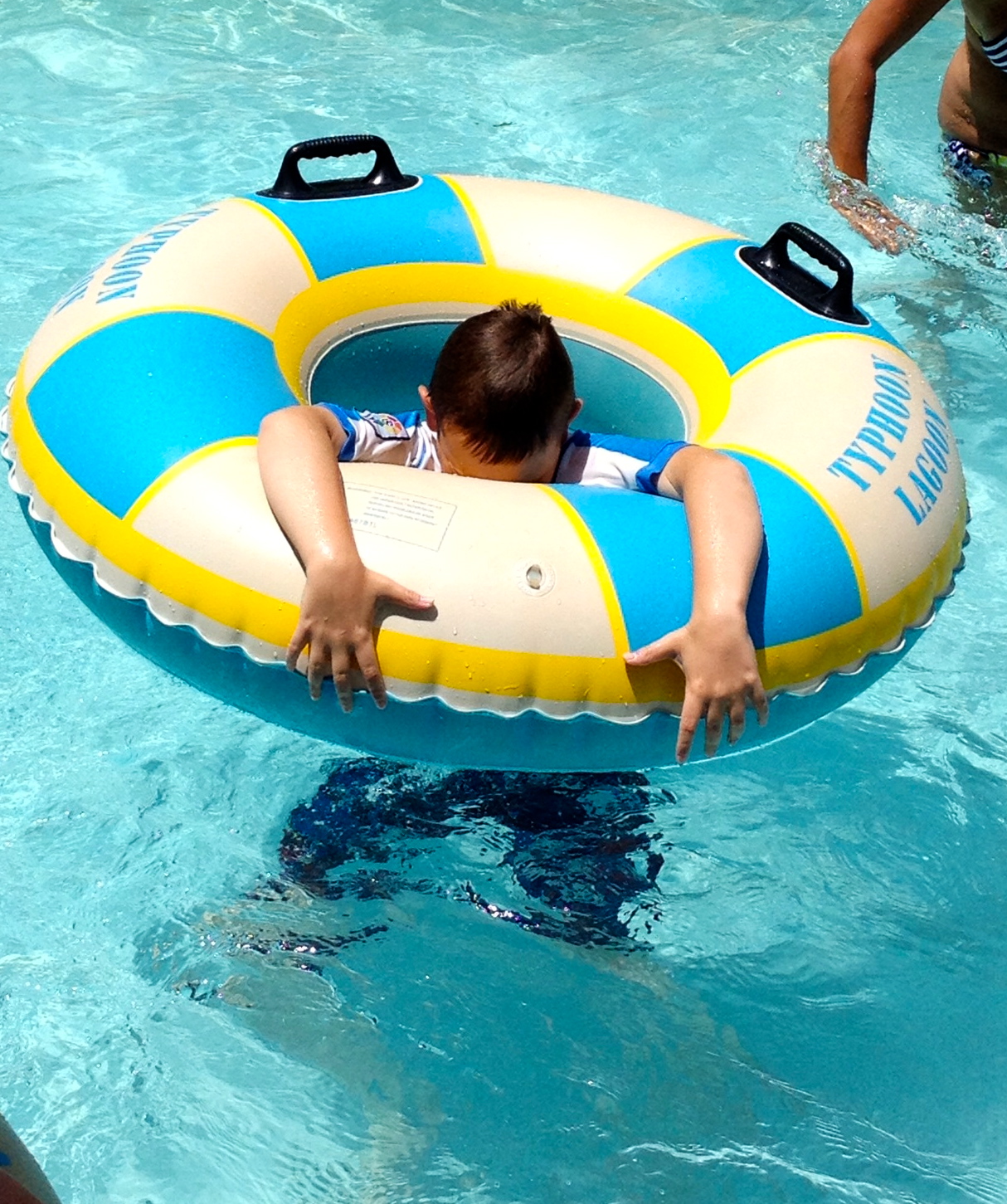 As the current sweeps my ten year-old son and me along we’re both laughing. My husband and teenage daughter have already managed to escape the water and are waiting for us. My son’s laughing with joy while I’m laughing partly because this is really fun and partly to hide a slight fear that we may never get out. The current’s really strong and the rapids loop around with no end point. But my fear is ridiculous because people of all ages in brightly coloured life-jackets are bobbing along happily in the water around us. We’re all watched over by bored lifeguards who don’t look like their skills are much called for. We’re cooling off in the Roa River Rapids at Aquatica water park in Orlando. I tell myself to toughen up, I grab hold of my son by his life-jacket and kick my legs to swim out of the current. Just as we’re close to calmer water my son gives me a cheeky look, slips off his life-jacket and whizzes off into the rapids again. I have to push myself back into the current and follow him, still holding his life-jacket. I eventually persuade him out of the water with the promise of lunch and we manage to force our way out of the rapids. I’m shattered. As we get out my daughter meets us with a worried look and says: ‘Has my mascara run?’

The three Orlando water parks we go to are a great contrast to the other theme parks we visit there on our family holiday this summer. Apart from the welcome opportunity they offer to cool down in the August heat the parks are relaxing, they have lots of places to lie down and read in the shade and we see nobody dressed as a princess or a furry animal there.

Walt Disney World has two water parks: Typhoon Lagoon and Blizzard Beach. They’re both beautifully landscaped with lots of greenery, shady spots and free Wi-Fi. Typhoon Lagoon is our first water park and we enjoy it so much that we go back to it another day. It has a tropical beach vibe with a huge wave pool which can make 6-foot high waves: this thrills my son. We all love the slides and rides with giant rubber rings to whizz down on. After the first of these my daughter says: ‘I think I’m more of a water park than a theme park person’ and my son asks if we can come back to Florida another time. But at all three parks there are also some body slides which you speed down on your back, feet first and I don’t like those at all as they grazed my back. Snorkelling with sharks and rays at Shark Reef is fun although staff move everyone through the pool quite quickly and it would have been lovely to have more time. 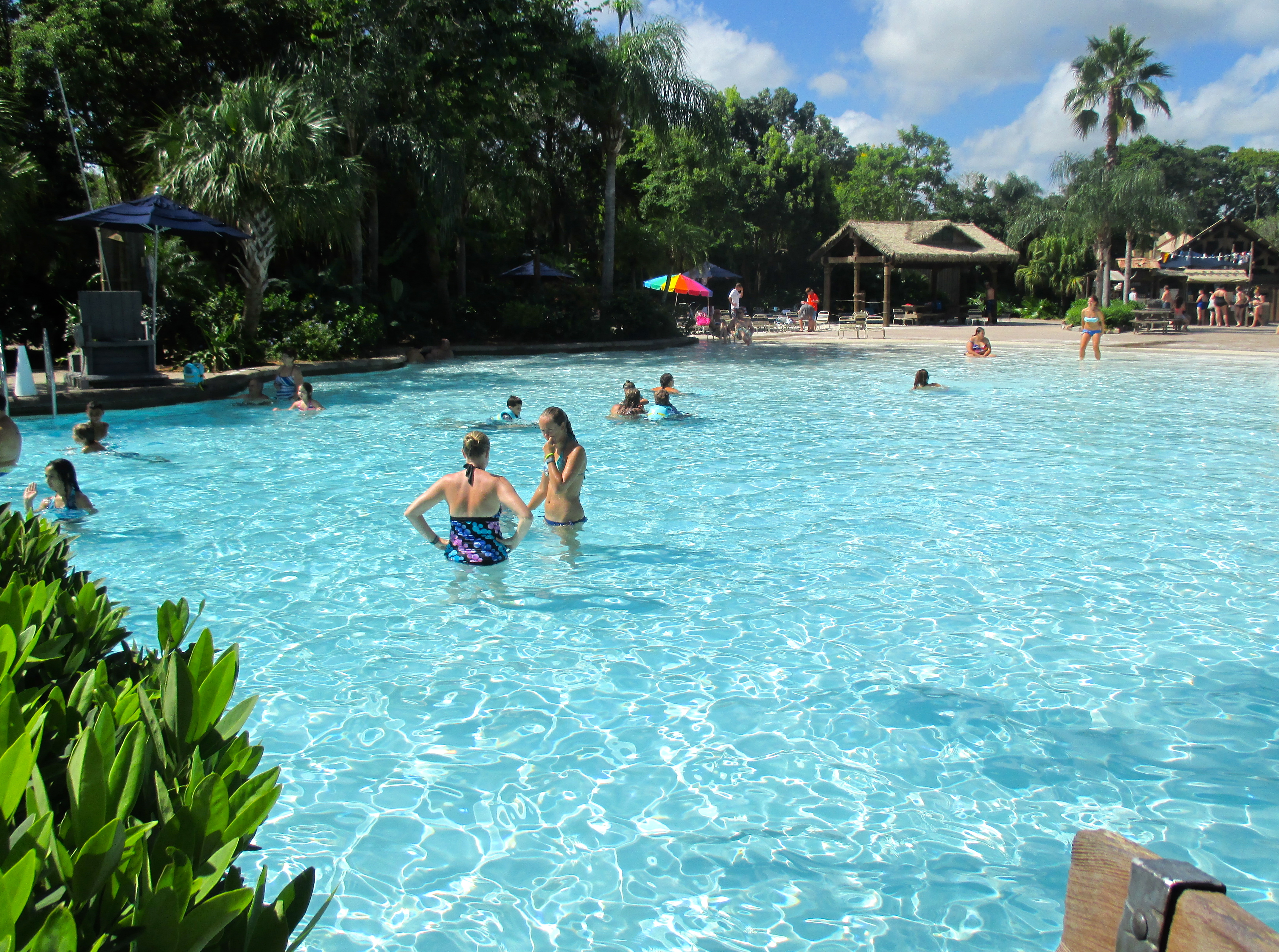 The story behind Disney’s Blizzard Beach is that someone tried to make a ski resort in Florida and it didn’t work out. So there’s a chairlift to carry you to the top of Mount Gushmore, the park’s divided into areas called Green Slope, Red Slope and Purple Slope and there are fake melting icicles all over the place. None of us brave Summit Plummet, billed as ‘one of the world’s tallest and fastest freefall body slides’, but there are lots of really fun rides and slides including plenty with rubber rings to protect my sore back. The best fun here is Runoff Rapids which has an enclosed slide which is brilliant for echoes: my son and I entertain each other by singing loudly as we whizz down.

Roa River Rapids is our highlight of SeaWorld’s Aquatica water park but we’re disappointed by the Dolphin Plunge slide, which is meant to be the park’s most popular ride. We queue up for it as soon as we arrive at the park, excited by the promise of sliding through a pool of dolphins. After a thirty minute wait we zip down the enclosed tubes so fast that none of us see any dolphins at all. The park has plenty of other fun slides though both with and without rubber rings. Aquatica feels a little stark compared to the other two water parks we go to as it has less landscaping and greenery. It has a fabulous water playground which looks great for small children.

Family travel lowdown: Thank you to SeaWorld Orlando for supplying the tickets for our day at Aquatica. For details of SeaWorld park tickets click here. We used our Disney 14-day Ultimate Tickets to visit Typhoon Lagoon and Blizzard Beach which cost £1020 in total for the four of us.