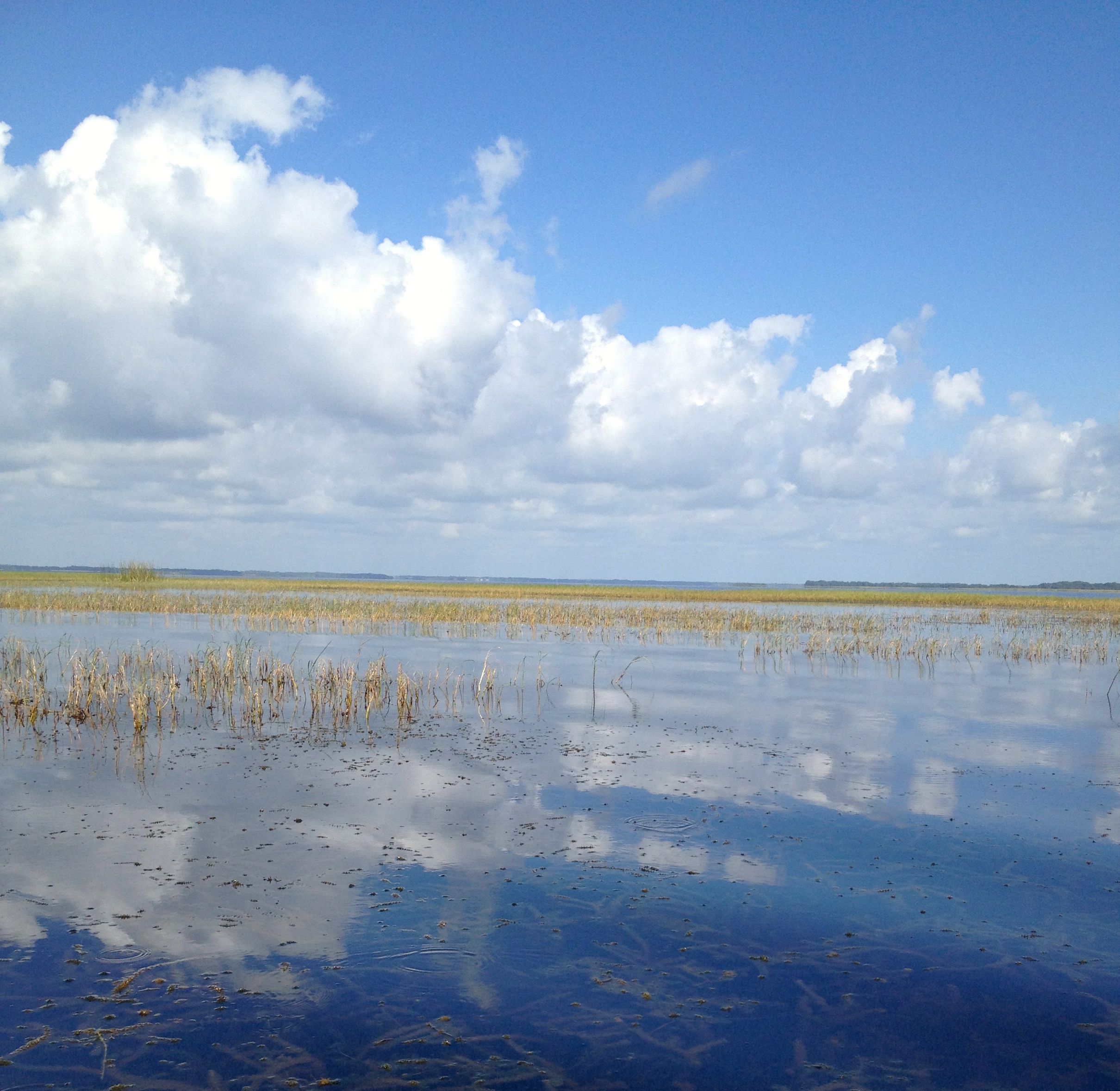 Alligator meat tastes best ‘cooked slow’ according to Tyler, captain of our boat. He works as a Nuisance Alligator Tracker as well as a Boggy Creek Airboat Ride captain so knows a thing or two about Florida’s famous reptiles. The State is home to around 1.6 million alligators and my son hangs on Tyler’s every chirpy word as he tells us all about them. We’re on a flat-bottomed airboat on West Lake Toho (short for Tohopekaliga), headwater to the Florida Everglades. I’m with my husband and son while our teenage daughter is in bed recovering from Too Much Disney. We’re staying just outside the glorious artifice of Walt Disney World yet a half-hour drive has brought us to a stunning natural environment and it feels like another world.

Ever cheerful, Tyler steers our airboat across the lake. Airboats are propelled by a giant fan mounted above the water so can travel in depths which are too shallow for normal boats. When we get some way into the lake Tyler cuts the motor and there’s nothing but silence and acres and acres of water beautifully reflecting puffy white clouds and a blue, blue sky. There’s not much chance of our spotting an alligator as it’s far too hot – apparently it’s easiest to see them at night – but it’s a gorgeous and serene place to come to anyway. Tyler tells us that he swims in the lake regularly even though there are around 8,200 alligators in it. He says: ‘Gators don’t harm cows or people’. I reckon the alligators must know a thing or two about people and are all in hiding: the hunting season starts the following day.

Later with the teen in tow we head over to Gatorland: an alligator theme park which opened in 1949. The teen is bored as soon as we get there and wants to leave. My husband and son are enthralled by the pools of entwined reptiles and want to see everything, especially the shows.

There are many different alligators and crocodiles to see here, including two dozing white alligators. They’re so still and so unusual looking that my son asks: ‘Are they real?’ We don’t brave the Screamin’ Gator Zip Line which whizzes the fearless across pools of alligators and crocodiles. The children’s water play area looks fun but is closed by the time we find it, late in the afternoon.

Up Close Encounters is the first show we see and is mildly entertaining. Two guys introduce the audience to some dangerous creatures (a giant spider and some snakes) interspersed with jokes my son loves such as: ‘Where does a snake bite you? The feet. Who’s wearing flip-flops? You’re going to die’. The Gator Jumperoo show is packed with people watching alligators jump up out of the water to eat pieces of meat suspended above their pool. 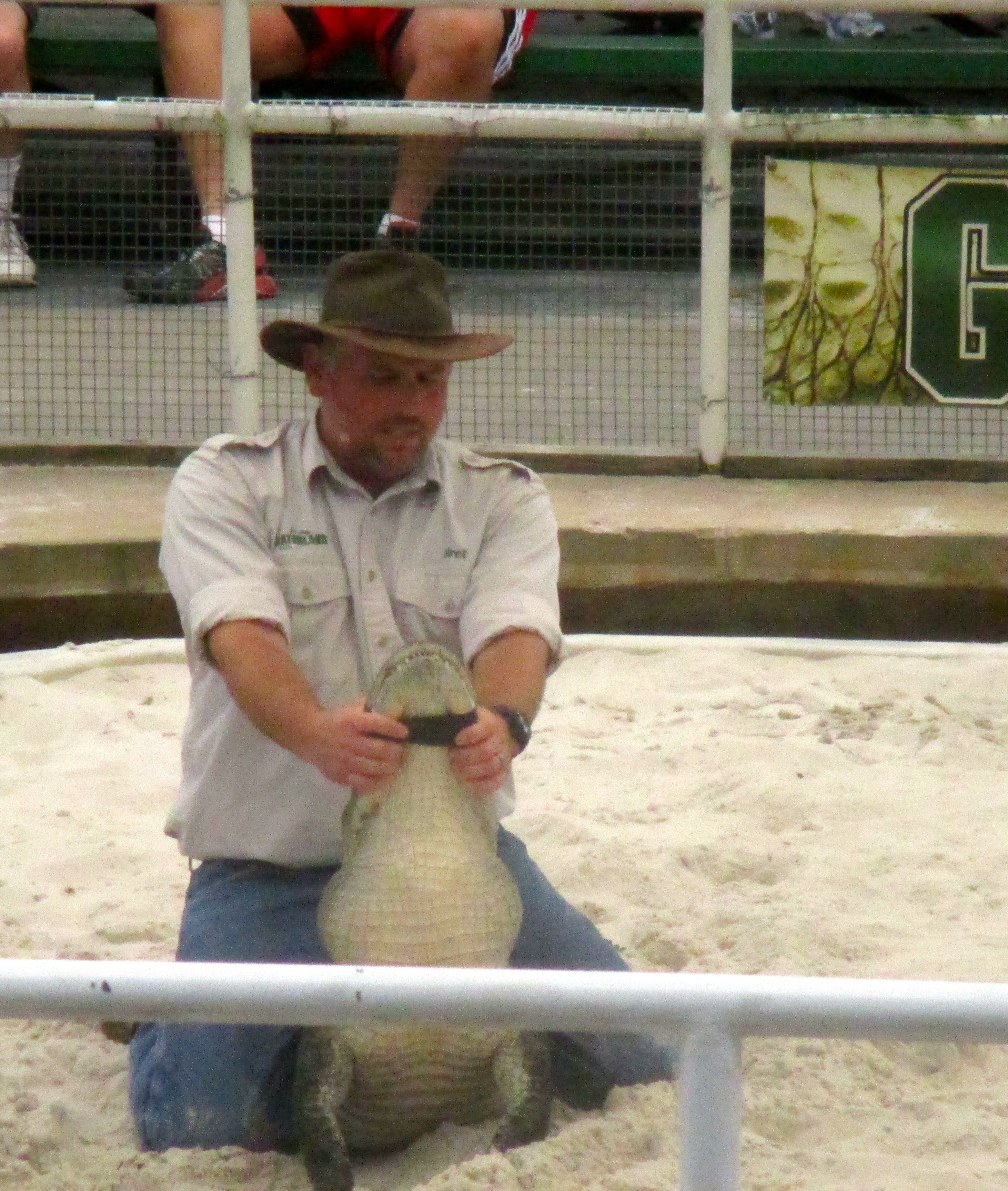 I pity the creatures in the Gator Wrestling Show. A dozen or so large alligators are in a pool of water below an area of flat, sandy ground. The man with the mic explains that alligator wrestling started when cowboys were herding cattle across the plains. Cattle would be eaten by alligators at water holes, so cowboys would have to wrestle the alligators out of the holes to protect the cattle. As we watch, a cowboy then wrestles an alligator out of the water by its tail, sits on its back and ties its mouth shut. This seems pretty mean but the next part is worse. People who have paid to do so go and sit on the alligator’s back and have their photo taken. We don’t.