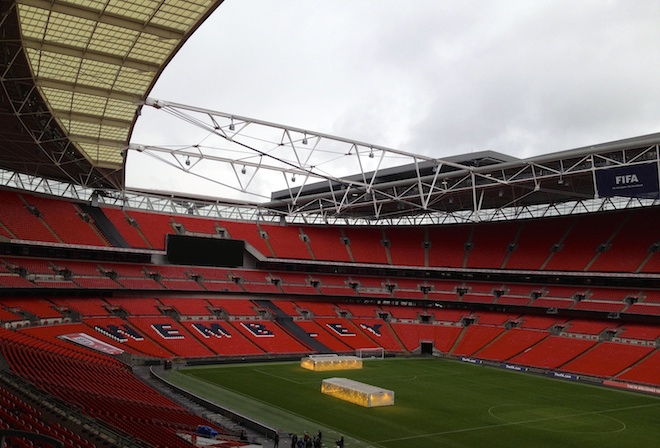 The teen isn’t terribly enthusiastic about going on a Wembley Tour but the trip’s in honour of her Dad’s birthday and so she doesn’t complain. We’d planned to go to London Zoo but it’s a grey rainy day, we decide that the animals will all be in hiding and opt for Wembley Stadium instead. As we wait in the Crossbar Reception (the crossbar from the 1966 World Cup Final is mounted in a glass case above the entrance) for our tour to start the teen looks very bored. Her Dad and brother are watching and discussing video clips of important footballing moments while I’m fascinated by the display about the sport’s history. I’m drawn to the old photos and the hand-written notes of the first FA meeting in 1863 including football’s original rules. They’re hard to decipher but I see no mention of sponsorship deals or transfer fees.

Our tour starts next to the original flag from the 1948 London Olympic games where our chirpy guide talks to us about the history of the place. The current Wembley Stadium opened in 2007 and was built on the site of the previous iconic building which dated from 1923. The first event in the old stadium was the FA cup final and it’s estimated that around 200,000 people squeezed in to watch the game. The queue for the toilets must have been murder. Today’s stadium seats 90,000 people.

We sit in the stands and look around at the vast, colourful space. My husband and children have all been here before but it’s my first time and I’m struck by how huge and expensive it looks. From the vibrant green turf to the padded red seats to the complex moving roof structure this looks like a high-maintenance venue.

The teen perks up in the press room when we learn that this is the very place where One Direction announced their next world tour. This was such an important moment that teaching in her (all girls) school seems to have stopped mid-lesson while pupils gathered around computers to listen to the much anticipated press conference. (I think it was a bit like that scene in The King’s Speech when war was announced. But more serious.) We sit in the very spot where Harry, Liam, Niall and the other two sat, although the teen points out that there are five band members but only four chairs so they may not be the actual chairs used by the boys: 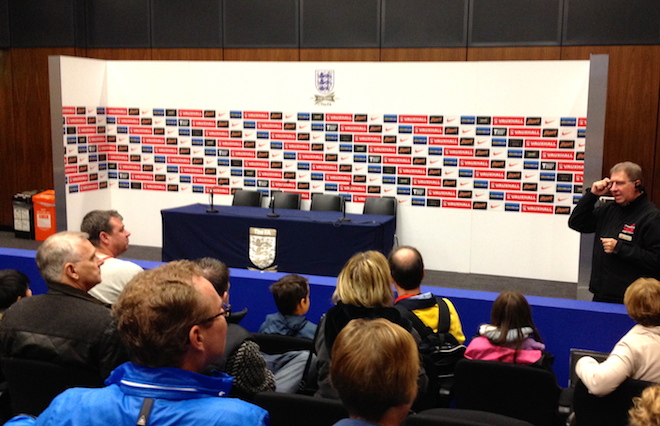 But where are One Direction? Copyright Gretta Schifano

The changing rooms are the next highlight especially when we learn that everyone from Take That to Michael Jackson to Madonna to the Rolling Stones has played here. The changing rooms are ready for the England football team’s next match, with hairdryers at the ready and shirts on hangers. The youngest asks me to take a photo of him in front of Jack Wilshire’s shirt and I think about Arsene Wenger’s remarks about footballers being role models after the player was snapped smoking recently. We line up in a holding area below the stands and watch a short video of England footballers lining up as we are, accompanied by the sound of the crowd. Then we walk through the players’ tunnel to the edge of the pitch and climb the steps to the Royal Box for a photo call with a replica of the FA Cup. Not what I expected to be doing on a Sunday afternoon at all, but quite fun.

The Wembley Tour takes 75 minutes and costs £41 for a family ticket. Photos with the FA cup replica cost extra (from £10). It’s best to book tours in advance as they don’t run every day. We drove to Wembley and paid £10 to park at the stadium. The nearest tube station is Wembley Park on the Jubilee Line.