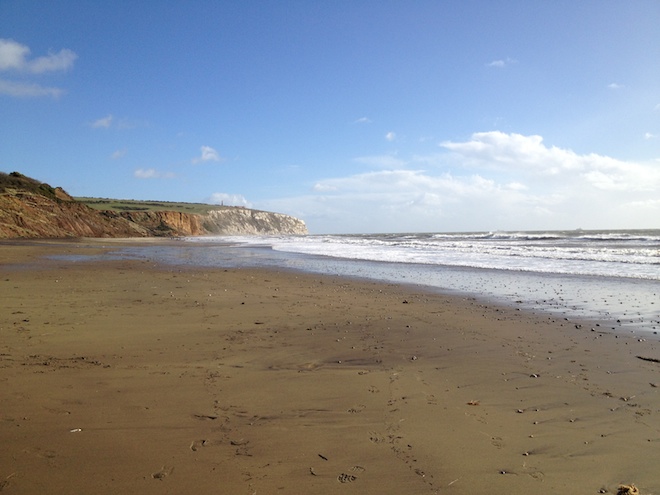 The thing is with fossil hunting that you never know what you’ll find. The end of winter is the best time of year to go – I learnt this on a guided family fossil walk on Yaverland beach in the Isle of Wight. I was were there with my husband and the youngest one October while the eldest was on her Spanish exchange trip. Our guide, Martin, explained that the winter weather causes cliff erosion which can reveal dinosaur fossils. I imagine that when it’s safe to venture out once the current weather in Southern England settles down there will be some interesting new fossil discoveries.

Martin led our small group along the sandy beach explaining what to look for and entertaining us with tales of the dinosaur fossils which have been found here over the years. The thrilling thing is that anyone can find these fossils: it’s just about being in the right place at the right time. A few years ago nine year-old Isle of Wight resident Daisy Morris had a pterosaur named after her – Vectidraco daisymorrisae – because she’d found the fossilised remains of a previously unknown species four years earlier.

125 million years ago there were lots of dinosaurs in this area and their fossils can now be found around the island. Martin told us to look for anything black and show it to him, because it could be the fossilised remains of dinosaurs or of wood from log jams. 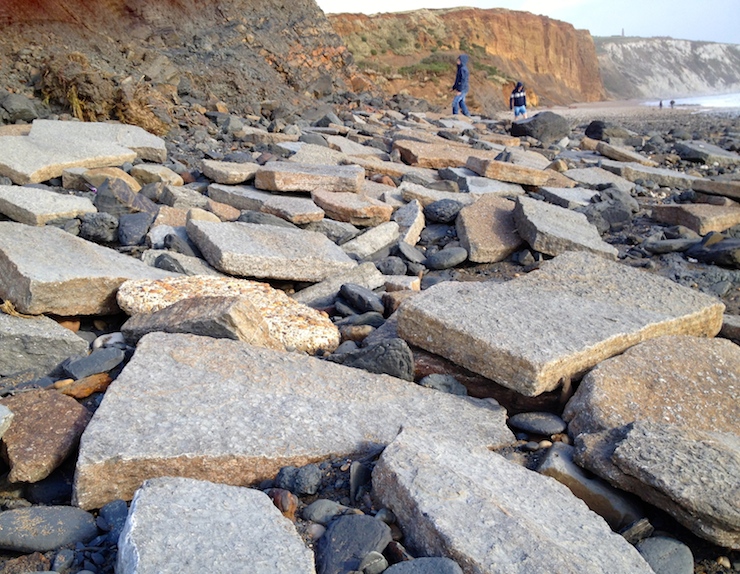 As I listened I became more and more determined to find a dinosaur fossil. We all kept spotting black things on the sand and showing them to Martin. I found a little black stoney thing which he said was a fossilised cast from inside a bivalve. Then I spotted an interesting grey, ridged stone which was pronounced a 100 million year old ‘gutter cast’ – apparently these can form in the dips left in the sand by water. The walk felt like an intensely absorbing treasure hunt.

Our fossil walk began at Dinosaur Isle, a purpose-built museum which houses the island’s fossil and geological collection. Dinosaur Isle is well worth a visit and its expert paleontologists can help you identify any fossils you show them. Although it was sunny when we set off on our walk it slowly became so windy that we had to turn back. We plodded along against the force of the wind, still hoping to find a dinosaur fossil. The youngest was cold and fed up by this point and I was starting to think we’d never find one when Martin took pity on us and gave me a dinosaur fossil he’d just found which is millions of years old. It’s the one with the black centre at the front of the picture: 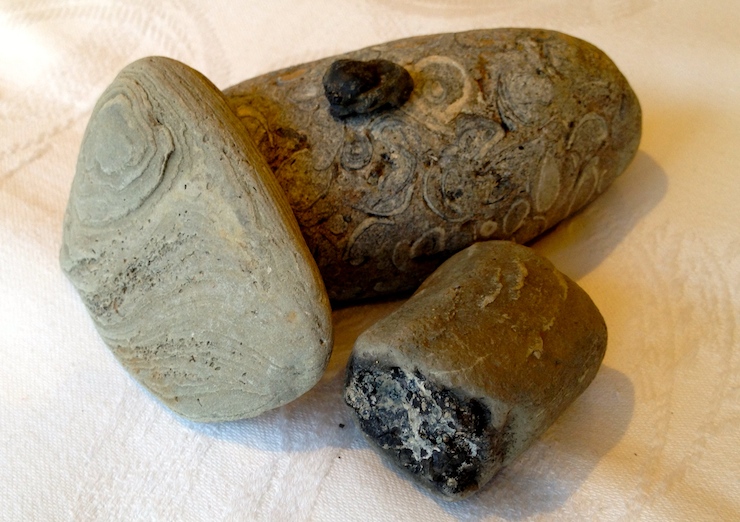 It’s fossilised dinosaur poo and it made my day.

Our Dinosaur Isle guided family fossil walk cost £5 for adults, £3.70 for children and is bookable in advance. To find out more about fossil hunting in the UK check out the UK Fossils Network website which also has a helpful fossil hunting code of conduct.

Disclosure: We were guests of Dinosaur Isle for the purposes of this review.