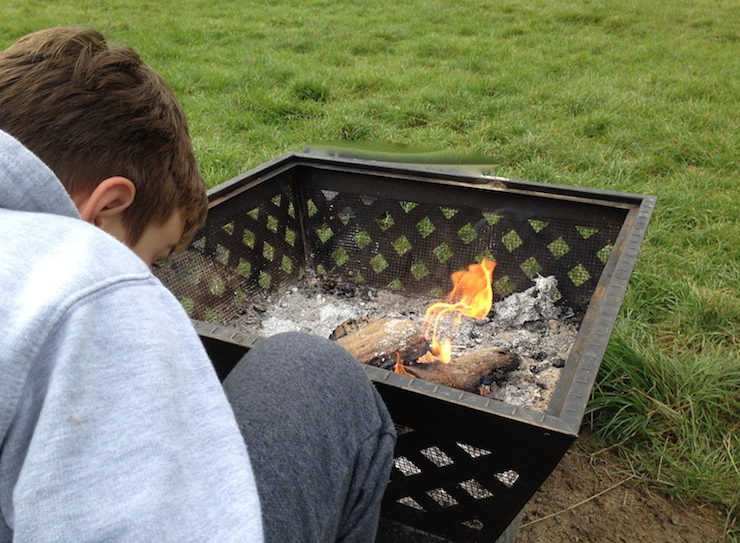 ‘If we were at home I’d be on the Xbox’ says my 11 year-old son. It’s a sunny, breezy, August morning and we’re in a lush, green field in the Sussex countryside. He’s sitting on a deckchair happily toasting breakfast marshmallows on the fire which he and his 13 year-old cousin have created in the fire basket in front of our tent. It was hard for them to get the fire started as it had rained during the night and so the embers from the previous evening were soggy. They’d made a determined effort with scraps of paper, firelighters and matches and managed to coax some flames into existence.

Nearby my sister and I are busy with the camping stove cooking the contents of the generous breakfast hamper which we’ve just collected from the Embers campsite ‘shop’ (housed in a safari tent like the one we’re sleeping in). It’s a bit of a juggling act with two burners but we manage to fry sausages, bacon and mushrooms and poach some eggs. We leave the baked beans and tomatoes for another time as we don’t think the four of us will be able to eat everything at once.

While we’re cooking my nephew says: ‘We should have one of these fire baskets at home. It makes cooking fun’. During our two-night camping trip the boys are constantly drawn to the fire and eager to cook different things on it. Besides the marshmallows they toast bread and roast apples as well as corn on the cob wrapped in foil.

We’re staying at Embers Bentley campsite near Lewes in the south of England. Every pitch on the site has its own fire basket. I’ve been looking forward to coming here since I interviewed the owner Murray McPherson a few months ago (you can read the resulting post here). Murray explained that he opened his first campsite, Embers Beaulieu, after a disappointing camping trip with his children. He wanted to create a natural camping environment like the ones he’d experienced as a child in South Africa. He told me that camp fires were a key component of that experience.

When they’re not engrossed with the fire the boys are off with other kids at the campsite. There are no caravans or motorhomes allowed at the site and cars are parked outside the camping field so it feels very safe and natural to let the children, even those much younger than our two, wander around by themselves. The tents are pitched around the edges of the field leaving a clear, open space in the middle. This makes it easy to see where everyone is and for kids to see what games are going on elsewhere in the field. Our boys rush over to join in at the first sign of any football activity and they befriend a younger boy in possession of a marvellous bow and arrow toy which shoots bright orange plastic torpedoes high up into the air. They find the gaggle of younger girls running around in onesies entertaining to observe but don’t join in with their pillow fights. 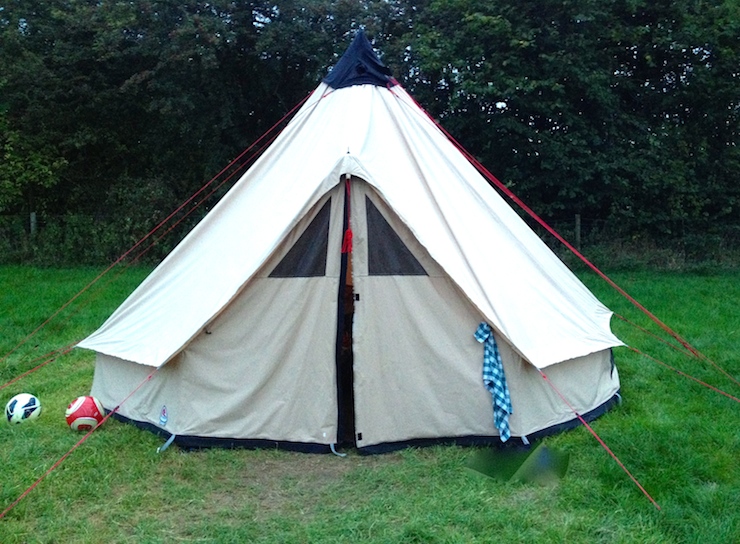 We sleep in a pre-pitched six-person safari tent provided by the campsite. It’s the first time that I’ve stayed in a pre-pitched tent and it’s lovely not having to put the tent up when we arrive. The tent is shaped like a circus tent with a central pole and an integral groundsheet. It’s high enough to stand up in and is roomy enough for the four of us and our gear. We’re sleeping on air beds and we bring our chairs inside the tent at night to keep them dry. I think it would be a bit of a squeeze for six of us to sleep in the tent and for this reason I am relieved that my daughter and my other nephew decided not to come with us.

When we arrive all we need to do is inflate our air beds (which I do by connecting an air pump to the car cigarette lighter), unroll our sleeping bags, unfold the chairs and set up the camping stove. Mountain Warehouse have kindly sent me a very nice foldable picnic table which is perfect for our food and kitchen stuff or as a breakfast table. We don’t need a table for our evening meals because we eat from plates on our laps sitting around the fire.

You can drive to your tent only to unload when you first arrive and to load up when you leave. In between those times there are sturdy trolleys provided for moving stuff like water containers and fire wood around the site. Of course the kids all love playing on the trolleys and our boys take turns to pull each other around in one.

The toilet and washing facilities are clean, basic and housed in mobile buildings near the site entrance. One building looks new and has showers in two rooms. There are two shower cubicles for men and two for women. The water’s hot but there’s not much room in the shower cubicle and the shower head is fixed in position which is a bit annoying if you’re not the right height for it. The other building seems older and contains the toilets and sinks. It’s quite cramped. Outside the washrooms are a couple of sinks for washing up. 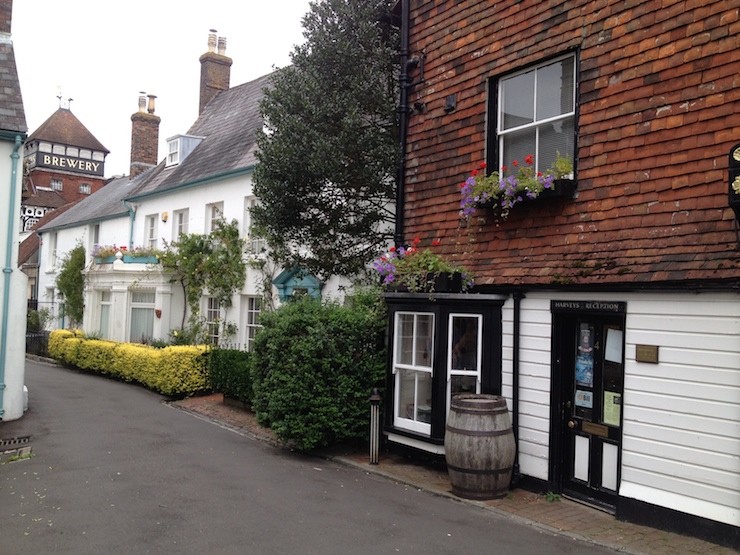 The campsite’s tented shop is open from 8am until 8pm and has basic supplies such as bread, milk and firelighters. You can buy bags of fire wood from the shop for £5 a bag and we found that one bag was more than enough for an evening’s worth of fire. You can leave your phone (at your own risk) at the shop for charging but be aware that the shop isn’t always staffed. The pretty town of Lewes is only a few miles away and we drove there for supplies when we needed them.

When we visited there was one member of staff working at the site. Katie was very friendly and helpful and did everything from running the shop and putting up tents to cleaning the toilets and giving directions.

Embers Bentley is the second Embers site and it opened earlier this year on the Bentley Estate. The estate is also home to Bentley Wildfowl and Motor Museum which is a haven for wild birds and has an adventure playground, a miniature railway and a good cafe as well as an impressive vintage car collection. The boys used their scooters to whizz around the estate when we visited but left them on the station platform when we went on the miniature train ride.

All four of us enjoyed our camping trip at Embers Bentley and the boys are already talking about going back with their Dads and siblings in tow. I’d recommend it to families with kids, as long as you can handle the very basic facilities.

Disclosure: Thank you to Embers Bentley for our two-night stay in a pre-pitched safari tent and for our breakfast hamper.