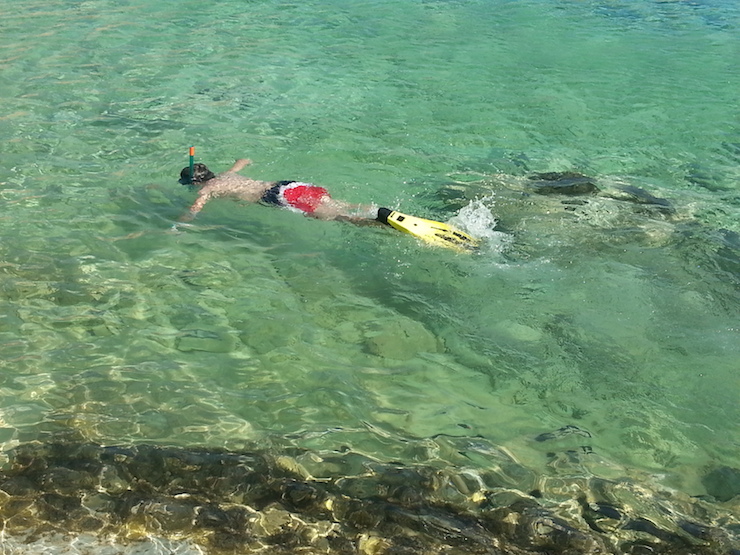 Backpacking in Greece with kids

If you think backpacking in Greece with children sounds like hard work, think again. Journalist Lorenza Bacino had been yearning to re-live her youth and do a spot of island hopping, but was reluctant to try it until the kids were a little older. This year the family felt ready and so with her husband and their 11 and eight-year-old kids in tow they tried out a little Greek adventure. Lorenza describes how her family thoroughly enjoyed a fun-packed summer of swimming, snorkelling and boat rides.

There were squeals of delight as the boat eased its way into the tiny port on our first stop – Kouffounissi island in the Minor Cyclades. My 11-year-old and my eight-year-old were leaning over the railing and couldn’t believe that such emerald water actually existed outside of their local pool. They couldn’t wait to jump in. I wasn’t far behind them as it was August and very hot and I too couldn’t wait to take my first plunge into the sparkling sea.

The beach at the port on Kouffonissi island is a gem. It isn’t very often that you can get off a boat and jump straight into the water. But here it’s perfect.

Kouffounissi is peppered with secluded coves and caves. You can hire a bike to explore them, and there are a number of small boats which operate a hop-on/hop-off system, departing from the port to the various beaches and back again. If you enjoy exploring, it’s worthwhile clambering across the rocks to find the real jewels and evade the crowds – not that this island is particularly busy. It’s mainly Greek tourists and a few Italians.

The children adored jumping into the Devil’s Eye, a beautiful rock pool just off Pori bay. My heart was in my throat, but I had to let them jump.  Or try climbing down the cliffs to Gala – a cave of ‘turqwhite’ water, as my daughter called it. The white powder from the rocks mixes with the turquoise water to create a milky blue swell. Playing in the surge and being tossed about by the waves was hugely exhilarating for parents and children alike.  The small beach there is sandy and pebbly.

We packed sandwiches and lots of water for the day trips and ate proper meals in the local tavernas in the evenings. There are lots to choose from and prices for a family are reasonable – typically between 35 and 40 euros for a family of four for generous portions. Fish is more expensive. The children enjoyed the souvlaki dishes, either chicken or pork, and there were usually meatballs and kebabs with chips and salads too.

Kouffounissi is small, and has only 350 permanent residents. Accommodation consists of simple but clean ‘rooms to let’, most of which overlook the port. Our rooms were a five-minute walk from the boat, across the beach. The balcony overlooked the water and it was completely fine to let the children go down to the beach themselves as we could easily keep an eye on them. There are a number of small shops scattered around the port, so you can stock up on a few essentials for the fridge. We could also make tea or coffee in the mornings. Rooms cost typically around 50-60 euros per night. They’re not luxurious, but have all you need for a beach holiday, including a shower, a fridge and air-conditioning. 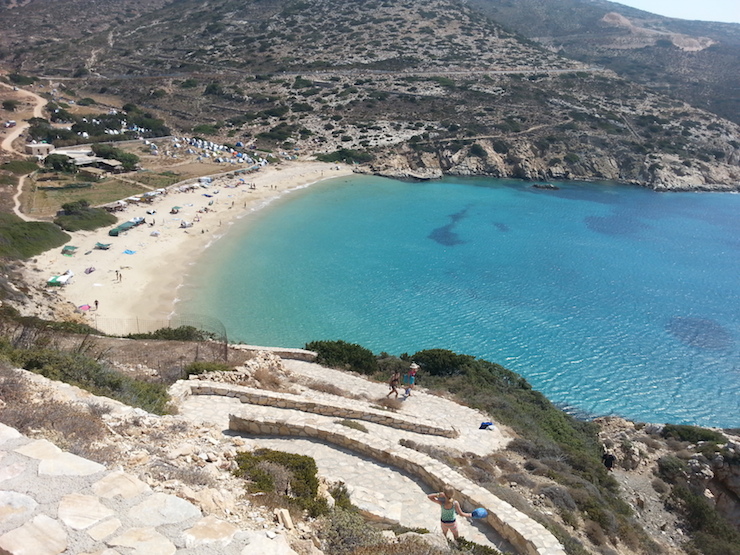 We took the Small Cyclades Line to cross to Donoussa. There’s usually a breeze on these islands and sometimes a strong wind can make for a rough ride. The Skopelitis Express that goes from Kouffounissi to Donoussa is quite small. We sat outside to avoid sea-sickness as it was a windy day, and all got drenched, much to the children’s delight. My daughter re-christened the boat the ‘Small Sick Ladies Line’ as she felt rather queasy – but recovered pretty quickly upon arrival.

The port beach is called Stavros, and has a fantastic bar which plays an excellent music selection all day. You can hang out here and play backgammon and drink iced coffee which is quite the thing in Greece. The food is good too, although they don’t serve in the evenings. There is usually live music to enjoy after 10pm.

Donoussa is rocky and arid.  Even the cows looked faded in the heat. It’s also a magnet for Greek hippies who come and hang out on the beautiful beaches of Kedros and Livadi. And who can blame them? The children found it hilarious to turn up on the one and only boat that serves the island’s beaches and see everything from bottled water, to dogs and babies handed down through a chain of mostly naked hippies onto the beach!

There are a number of walking trails on the island too, and you can buy a  map indicating the difficulty and distance of each walk  from the little tourist shop on the port.

The highlights, besides the fantastic bar on Stavros beach include  trips on the island’s one and only boat with a convivial and friendly crew of two – riding the waves to the cave, snorkelling and jumping off the boat. The skipper will wait 20 minutes or so while you swim and if you’re really lucky he’ll serve you some rough Greek wine in plastic cups just to prepare you for the waves and the journey back to port!

This island has only 100 residents and three restaurants. They are situated on either side of the port. Don’t expect to be served your meals altogether. This never happened in any restaurant and we accepted that’s just the way it is. 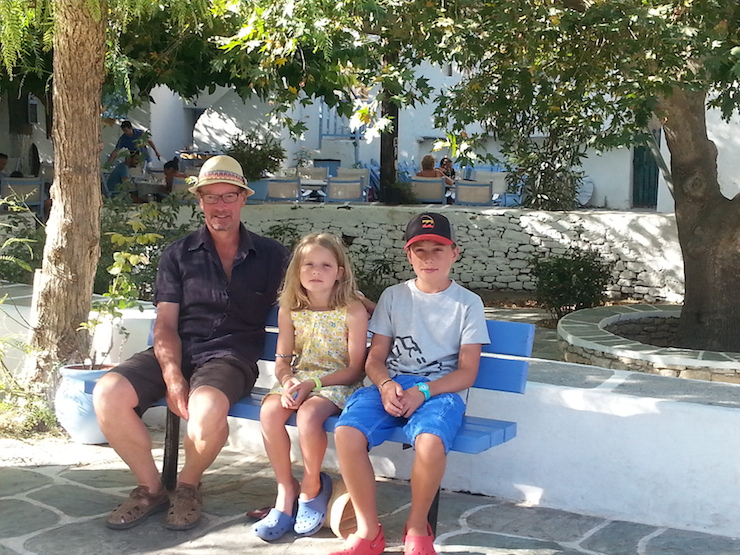 Folegandros was our stop before returning to mainland Greece. It’s closer to Santorini than the others and is the more quaint and touristy than the other two. There are many bars and restaurants to choose from and you can lose yourselves in the cobbled streets of Chora, the capital. The oldest part of Chora is called Kastro, and it’s the fortified and densely populated medieval quarter.

On Folegandros  you need to take a bus to all the beaches, but they are big and comfortable and have regular timetables. The views of the sheer 300m drops to the sea are spectacular.

Take time to climb up to the Church at sunset. We also saw a local Orthodox service at the same time which really set the scene.

You can find refreshments only at the beaches of Karavostasis, Livadi, Angali and Aghios Nikolaos.

Have you ever been island-hopping in Greece? Do you have any tips to add?