Sir Ranulph Fiennes – Ran to his friends – is 71 years old, has had cancer, two heart attacks and a heart bypass operation. Sir Ranulph is currently training for the Marathon des Sables, also known as ‘the toughest footrace on earth’.

I meet the explorer at London’s Kingston University. He’s training in a Heat Chamber which simulates the temperature and humidity that he will experience when he takes part in the race in the Western Sahara in April. After running on the treadmill in a temperature of 40 degrees celsius for an hour he’s barely sweating. Dr Hannah Moir is assessing his performance and says that he’s coping well with the conditions.

The Marathon des Sables is a six-day ultra-marathon which covers 156 miles (251 km) in temperatures of more than 50 degrees centigrade. Competitors have to carry on their backs everything that they need for the entire race including 14,000 calories of food, a sleeping bag, a signalling mirror and 200 euros in cash in case they drop out and need transporting somewhere. The race organisers provide water at rest stops at 10 kilometre intervals and at night there are eight-person tents for the competitors to sleep in. If Sir Ranulph completes the race he will be the oldest Briton to do so.

Sir Ranulph is taking part in the race in order to raise funds for Marie Curie Cancer Care. He’s already raised £6.3 million for the charity and is aiming to raise a further £2.5 million with this challenge. Marie Curie provides free care to people with any terminal illness either at home or in one of its nine hospices. The charity invited me to meet Sir Ranulph as part of a group of bloggers so that we can share his story as he takes part in the challenge from 5th – 11th April 2015 and also so that we can encourage people to sponsor him.

International Performance Coach Rory Coleman has completed the Marathon des Sables 11 times and he must enjoy it as he’s taking part again this year. Rory is coaching Sir Ranulph and he says that the race is tough for anyone but that it will be ‘incredibly hard’ for Sir Ranulph.

Rory tells us bloggers (all women) that we would all be able to do this race as long as we prepared for it. We look at each other doubtfully and I reflect on how shattered I felt after dancing for six hours in the Red Nose Day Danceathon. Rory’s coached 100 of the competitors who are taking part in the race this year and says: ‘The women are more focused than the men. The women are loads better.’ He says that the majority of competitors are men and that a high proportion are accountants. He says: ‘Everyone in the race is equal. All you have to do each day is get from there to there. For those days you’re James Bond or Indiana Jones or Lawrence of Arabia and you’re not an accountant’.

Sir Ranulph is definitely not an accountant. I feel exhausted just reading the timeline of his life and I think that he’s more like James Bond, Indiana Jones and Lawrence of Arabia all rolled into one than an accountant. For instance….he was in the the SAS. He was the first person (with Charles Burton) to reach both poles by surface means. They were also the first people to cross the Antarctic and Arctic Oceans and the first to circumnavigate the world along its polar axis by surface means. Sir Ranulph and his team discovered the lost city of Ubar in the Yemen. With Mike Stroud he was the first person to cross the Antarctic Continent unsupported. After a heart attack Sir Ranulph ran seven marathons in seven days on seven continents. He’s the oldest Briton to reach the summit of Mount Everest (at the age of 65). He’s the first person to cross both polar ice caps and reach the top of Everest. 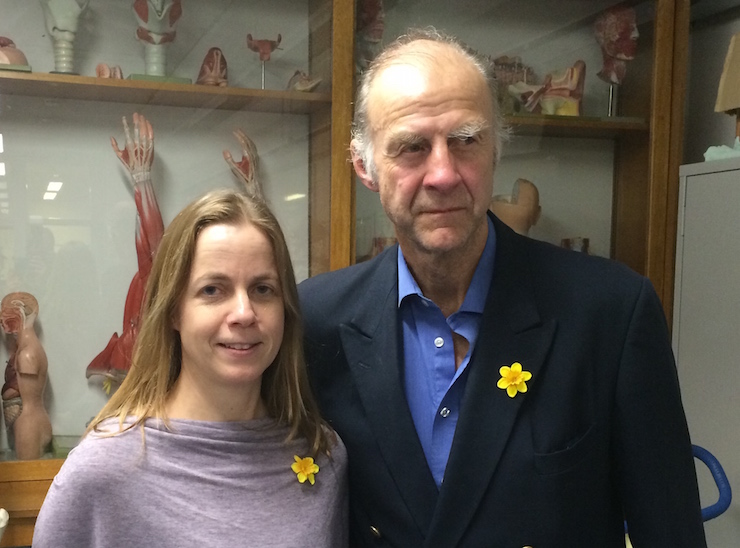 Sir Ranulph is married and has a nine year-old daughter and when I read about his adventures and achievements I find myself thinking about his wife and child and their family life. I ask Sir Ranulph how he relaxes. He thinks for a moment and then says that it was his wedding anniversary last week and he went to the cinema with his wife to see Kingsman: The Secret Service. It’s a film about an elite secret spy organisation.

I ask him what his daughter thinks about what he does. He says: ‘She’s not interested’. (I find this amusing and I wonder if she’ll be embarrassed about him when she’s a teenager too).

I ask where they go for family holidays when he’s not off exploring.

He says: ‘Wherever my wife wants us to go.’ This surprises me.

I say: ‘So where did you go for your last family holiday?’

I brighten at the thought that this driven, heroic man sometimes relaxes on a beach. Then he says: ‘We went to find Granddad’s leper colony. My Granddad founded a leper colony and it still has 90 lepers living there. When we’re not fundraising for Marie Curie we’re fundraising for them.’ I feel guilty for imagining him relaxing on a beach. I don’t know what to say.

Then Charlie of the runner beans asks Sir Ranulph what he most looks forward to eating and drinking after a race. He says: ‘I like a cup of tea. And my daughter’s chocolate, especially those Easter rabbits.’

How to sponsor Sir Ranulph

You can sponsor Sir Ranulph Fiennes as he competes in the six-day 156-mile Marathon des Sables for Marie Curie via his JustGiving page below or you can text RUN to 70007 to donate £5 – you can also include a message of support in your text.