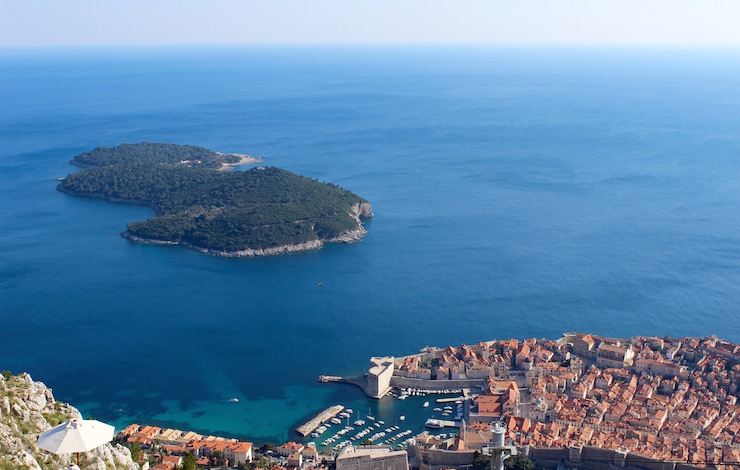 When Ana called me and suggested that we should try a buggy safari I wasn’t really sure what she meant. I was sitting in a restaurant having lunch with my husband and two kids in the Croatian city of Dubrovnik.

We were in Croatia for a week during the Easter holidays and we were staying in a James Villas apartment near Dubrovnik. We were spending the day sightseeing and had already walked around the ancient city walls and taken a boat to the island of Lokrum. After lunch we were planning to take the cable car to the top of Srd hill in order to look down on Dubrovnik from above.

Ana is one of the managers at Dubrovnik Sun Gardens, the luxury resort where we were staying. I’d met her a couple of days earlier and she’d given me some helpful advice about things to do in the area but she hadn’t mentioned a buggy safari.

‘But what is a buggy safari?’ I asked. Ana tried to explain but it was noisy in the restaurant and the phone signal wasn’t great and so I couldn’t really understand her. Ana said that she would email me about it.

When we left the restaurant we used our map of Dubrovnik to find our way to the cable car entrance outside the defensive city walls. We bought our return tickets and waited in line for a few minutes for the cable car to arrive. The cable car takes you up to a height of 405 metres above sea level and the viewing areas on the three terraces at the upper station offer spectacular views of the city of Dubrovnik, the surrounding area, the Adriatic and the local islands. 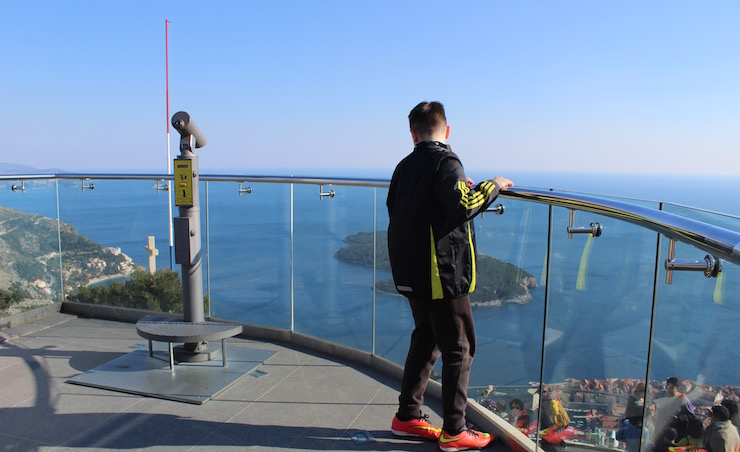 It was a clear, sunny April day and we could see for miles from the upper cable car station. We spent a while taking photos and as we walked down the stairs from the top viewing area my 12 year old son said:

He’d spotted a small sign which was stuck to the wall. The sign had an arrow pointing to the back of the cable car station. We followed the direction of the arrow . We ended up outside looking at this collection of odd looking vehicles: 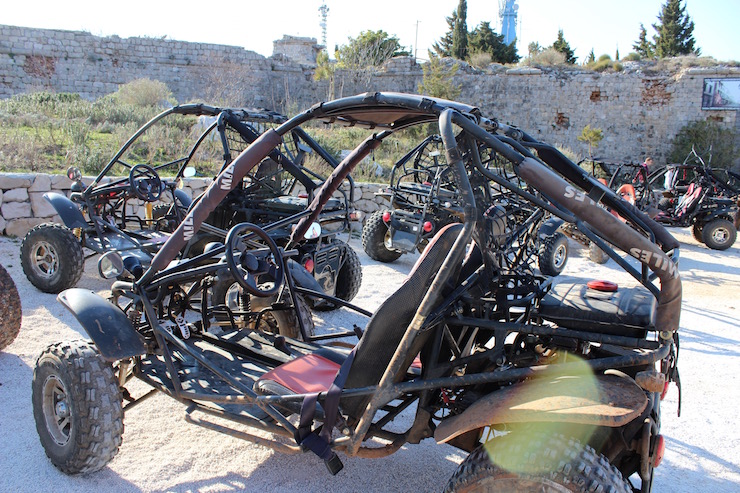 ‘Can we go on one?’ said my son as soon as he caught sight of the buggies.

I went to talk to the Croatian staff at the Buggy Safari Dubrovnik stand nearby to find out what was involved. It turned out that a friendly young woman called Ivana was expecting us – she’d had a call from Ana. Ivana explained that you had to have a driving licence in order to drive the buggies but that kids as young as five years-old can go on them as passengers. The buggies go on one-hour guided off-road safaris every hour across the rugged countryside. The tour stops off at an old fort and at a panoramic viewpoint en-route. She assured me that the vehicles were easy to drive and that they were safe.

My son was listening avidly. My husband and daughter had wandered off while we were talking.

When we found them my husband agreed to come along on the tour with us but my 16 year-old daughter wasn’t keen at all. We installed her at the lovely cafe inside the cable car station. She settled in to enjoy the view and read her book while she waited for us.

Although I’d tried to persuade her to come along, a part of me was actually relieved that our daughter hadn’t come with us because that meant that I didn’t have to drive a buggy. I’d never driven anything like that before and the terrain was very rocky and mountainous. Each buggy has room for a driver and one passenger. My husband drove a buggy with our son as a passenger while I was driven by one of the guides, a lovely guy called Jure who spoke excellent English. There were also a couple of French men with us in a third buggy.

Before we set off we put on safety helmets and strapped on our four-point seatbelts. The drivers were given a quick explanation of the buggy controls – really just the accelerator and brake – and we were off.

Ivana had told me that the buggies have 150 cc engines with a top speed of 70 km/h but that the speed of the tour would only be about 20-40 km/h. It felt to me as if we were going very, very fast as we bounced along the rocky track away from the cable car station and inland. I was glad that I was in the lead buggy because behind us the wheels were blowing up dust from the track as we went along. 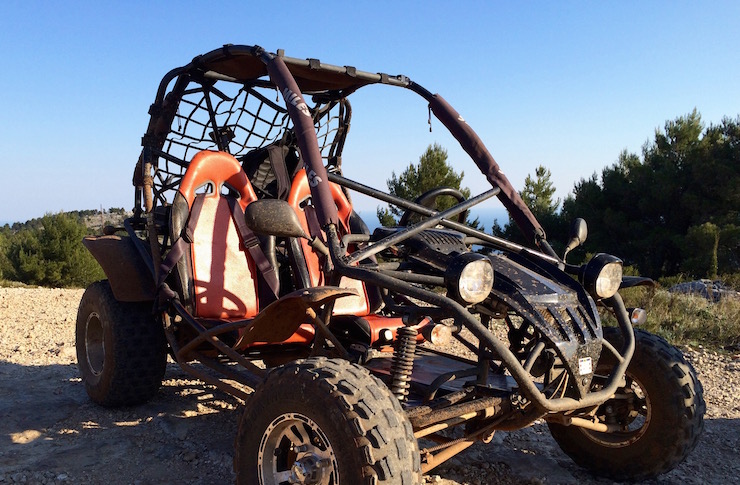 We drove through the mountainous countryside along unmade tracks until we eventually stopped at a fort overlooking the sea. We all got out to have a look at the fort and Jure told us that it had been built in the time of Napoleon and had been used in various wars since, including during the Balkans conflict in the 1990s. There were rusting bomb parts lying around and Jure passed around a chunky piece of one to hold. My son looked very serious as he weighed it in his hands.

Jure pointed out a TV mast nearby which, he said, had been fired at many times by the battle ship which patrolled the waters here during the Balkan conflict. He indicated the mountains just a couple of miles inland.

‘At the top of those mountains’ he said, ‘it’s Bosnia’.

On a clear, sunny day on a happy holiday with my family I felt cold at the thought of the people who were trapped in Dubrovnik and in this narrow strip of Croatia during the Balkans conflict just a couple of decades ago. It must have been terrifying to be here.

We all (apart from the helmet-less Jure) strapped ourselves back in to our seats and whizzed along some more rocky tracks and through woodland until we stopped at a spot offering panoramic views of the sea and of the local islands. One of the other guides met us there and explained how the whole area is dotted with the remains of missiles from the war. He picked up a small fragment of rusty metal from the ground to demonstrate this and said that we could take it home as a souvenir.

We took some photos and then got back in to the buggies for the final leg of the tour.

I enjoyed the Dubrovnik Off-Road Buggy Safari although I was very nervous about driving the buggy to start with and I wish that I’d been wearing a sports bra. I was very interested to hear about the history of the area, especially what happened here during the Balkans conflict. My 12 year-old son loved the off-road experience and says that it was the best thing that we did on our trip to Croatia. My daughter is pleased that she stayed in the cafe looking at the view and reading her book and not getting dusty. My husband says: ‘It was good fun and it made a change from sightseeing’.

Disclaimer: We were guests of Buggy Safari Dubrovnik and of James Villas for the purposes of this review but all opinions are my own.