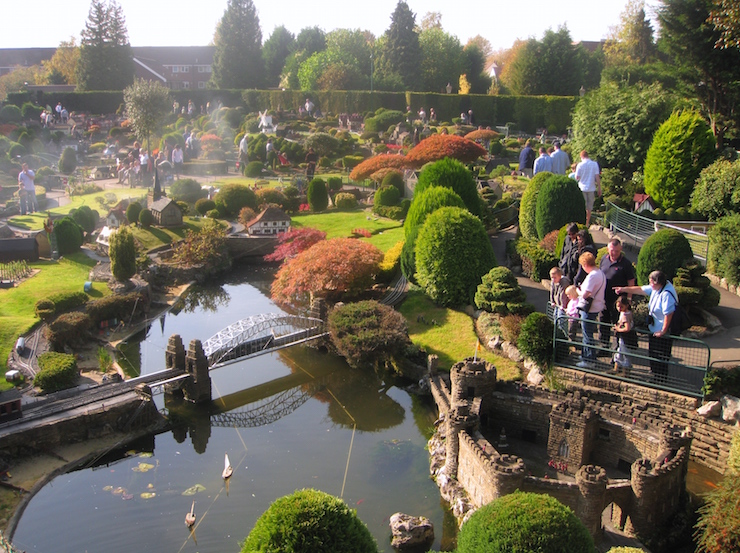 Bekonscot Model Village is in Beaconsfield, a quiet, rural town just 25 minutes by train from London. Bekonscot is a magical English minature village which is set in the 1930’s and is hidden away in a large old country garden in Buckinghamshire. Bekonscot is surrounded by neatly clipped hedges. Life is depicted here as safe, happy and cooperative.

My six-year old son Simon, his granny and I wandered around for about an hour and a half on a warm Saturday in May loving every moment of this visit. You need to spend at least an hour at the village in order to see all of the detail.  ‘Wow’ and ‘Look at this!’ can be heard all over the village, as well as contented silence, as children stare intently at the curious scenes.

The model buildings are made from natural materials and come up to the thigh. They include a church, a castle, a farm and a fishing harbour. Moving trams, cable cars, windmills, boats and a whole railway network link the garden. There are more than 200 buildings, 3,000 inhabitants and 1,000 animals at Bekonscot.

Children can stand on bridges and watch the trains whizz around and stop at stations. There is so much to discover. One feels like a giant in this land, free to spot all the private goings-on of the villagers at work and play. Fishermen tend their boats, a church choir sings, shoppers linger in the street, passengers wait at the stations and a game of croquet goes on. There are humourous names to spot such as the shop Lee Key Plumbers and the florist Dan D. Lyon. In addition, there’s an imaginative real size playground for children to enjoy. Visitors can also go for a ride on a light railway that weaves around the gardens and play with remote control boats and a pirate water feature. There’s plenty to keep one busy. There’s also a cafe selling homemade food or you can take your own picnic.

Bekonscot was built by wealthy accountant Roland Callingham. When his train set outgrew the house, his wife persuaded him to move it into the garden. He then decided to build the largest model outdoor railway in England, and construction started in 1928. 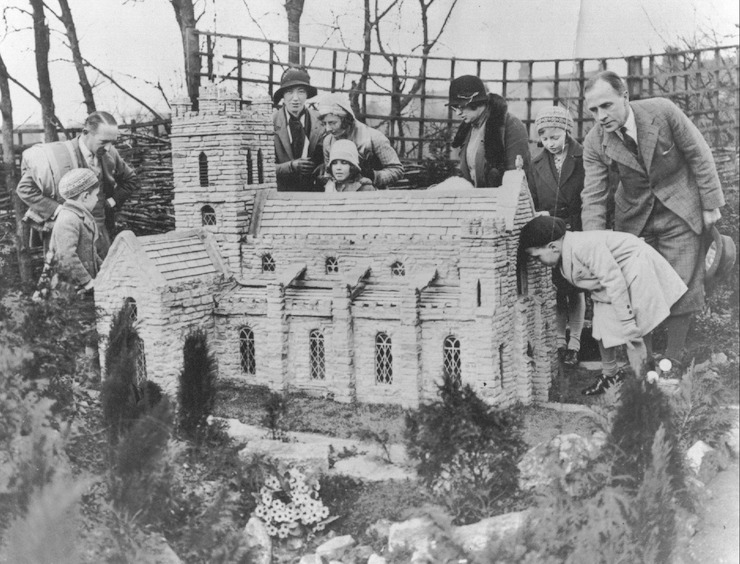 The village opened to the public in 1929. Together with his gardener Tom Berry, his maid and his chauffeur, Roland Callingham built the houses and worked on the village for another half century.

All profits from running Bekonscot go to charity. Over 5.5 million pounds has been raised over the years, and over 14 million visitors have come through the gates, including members of the royal family. A visit to Bekonscot is a lovely experience for the whole family and is a great option for a sunny day out. My son and his friends always ask when they can go back again.

Bekonscot Model Village is a five-minute walk from Beaconsfield train station and a few minutes away from the M25 and the M40.

Entry to the model village costs £9.80 for adults, £5.80 for children (2-15) and is free for under 2s. Tickets for the mini train ride, pirate water feature and remote control boats cost £1 each.

Kate Ainscow is a British journalist who lives in the UK. Kate specialises in writing about family days out.