Home / Type of trip / City / How to visit Parma 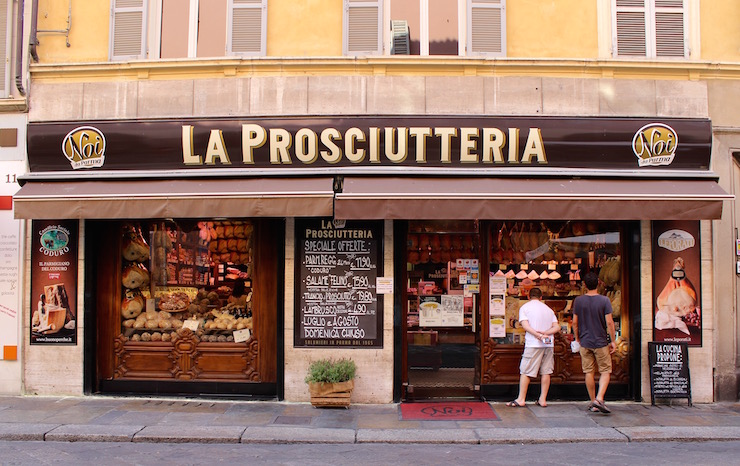 How ever many times that I go to Italy there are always wonderful places to be visited for the first time. One such place is Parma, where we spent the first couple of days of our family summer holiday. Parma is in Emilia-Romagna in the North of Italy and is one of the country’s wealthiest cities. Renowned for its eponymous cheese and ham, Parma offers so much more than its delicious food alone. The composer Verdi was born there and it’s home to one of the oldest universities in the world. Its historic city centre – the cathedral was consecrated in 1106 – is fascinating to explore and is refreshingly uncrowded. We didn’t come across any other non-Italians when we were in Parma.

Getting to Parma was easy. We (my husband and I and our two kids, 12 and 16 years old) flew from London to Milan. We picked up our hire car at the airport and set off for Parma, where the Emilia-Romagna tourist board had arranged accommodation for us for two nights.

A couple of hours later we pulled up at R&B Opera 11 – ‘R&B’ stands for ‘room and breakfast’ – in a narrow cobbled street in the old part of the city. Opera 11 is owned and run by Francesca and Roberto, a friendly local couple and is a relaxing and welcoming place to stay. While Roberto showed my husband where to park nearby, Francesca showed me and the kids around the beautifully-renovated building. The ground floor consists of a comfortable open plan kitchen, dining and living room. There’s a Nespresso machine, a water cooler and a fridge and cupboard stocked with snacks, juice and milk for guests to enjoy. Each of the three upper floors contains an en-suite bedroom: the kids stayed on the top floor, my husband and I were below them and an Italian couple were on the first floor. Each bedroom has its own air conditioning unit (thank goodness – it was roasting) and there’s wifi throughout the building. Francesca told us that she’d bring us fresh bread and pastries for breakfast each morning, which she did. The kids liked staying there and they were happy to be there by themselves when my husband and I went out to explore a couple of times. Rooms at R&B Opera 11 cost from 70 euros per night including breakfast. 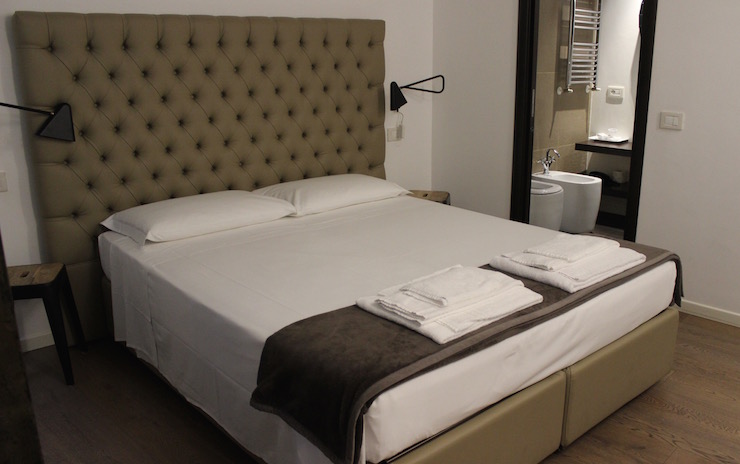 After breakfast the following morning, local tour guide Cristiana Capelli came to show us around the city centre. Cristiana speaks excellent English and it was great having her to guide us. It was so hot that I don’t think that we’d have persuaded the kids to move outside without Cristiana’s presence. Traffic is controlled in the city centre and everything’s quite close together so it’s an easy city to explore on foot.

As we walked along, Cristiana told us about Napoleon’s second wife Marie Louise, the eldest child of the Austrian Emperor. Marie Louise’s father arranged for her to marry Napoleon when she was just 18 years old, before she’d even met the Frenchman. She gave birth to Napoleon’s son in 1811. When the French empire fell and Napoleon was exiled, Marie Louise was appointed Duchess of Parma and came to live in the city. Known locally as Maria Luigia, she’s still referred to as the ‘good Duchess’ and had a huge influence on the city. The Museo Glauco Lombardi has an exhibition all about her.

Cristiana took us to to a small perfume shop, Parma Color Viola on Via Repubblica, which specialises in Parma violet products. This transported me back to my childhood and reminded me of my grandmother. Apparently the Duchess of Parma introduced the scent to the city when she arrived there from France. She persuaded some local monks to produce the perfume and it went on to become one of the most popular fragrances in the world. I couldn’t resist buying some Parma violet perfume in vintage glass bottles at the shop. 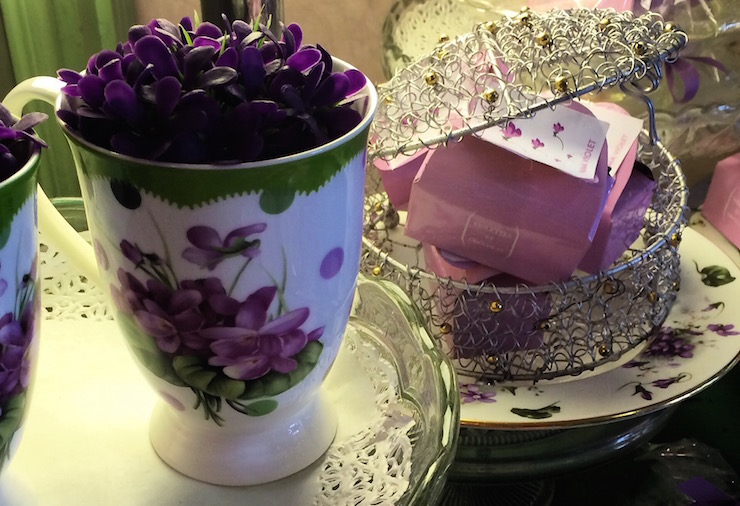 The Palazzo di Pilotta is a huge palace which was built in the 16th century. There are various museums in the palace, as well as the impressive Teatro Farnese which we visited. Teatro Farnese is a 3,000-seat wooden theatre dating from 1628 which was built just for nobles and was rarely used. It was extensively bombed in WWII and then restored. Cristiana told us that it can’t be used today as a theatre as it doesn’t meet fire safety standards, which is a shame. 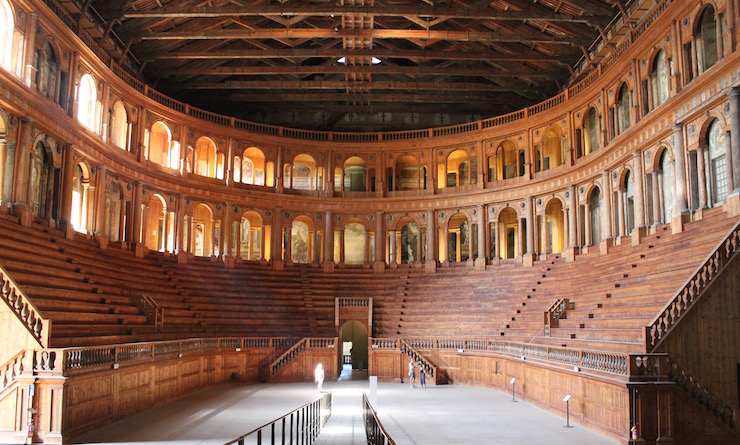 The highlight of the cathedral in Parma is the interior of its dome, which is full of naked angels. They were painted by the artist Correggio in the sixteenth century. The cathedral clergy at the time didn’t like the realism of the naked figures that he’d painted and refused to pay him. Correggio added drapes and clouds but the clergy still weren’t happy. So before he left, Cristiana explained, Correggio painted a naked angel with its legs akimbo which could only be seen from where the clergy sit. You can still see that angel today. Can you see it in my photo? 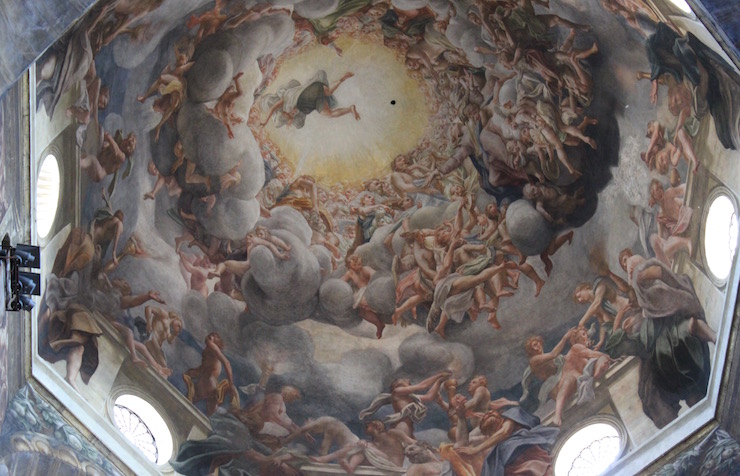 Next to the duomo is an octagonal baptistry which is built of pink marble. It was completed in 1307 and is just marvellous to see. 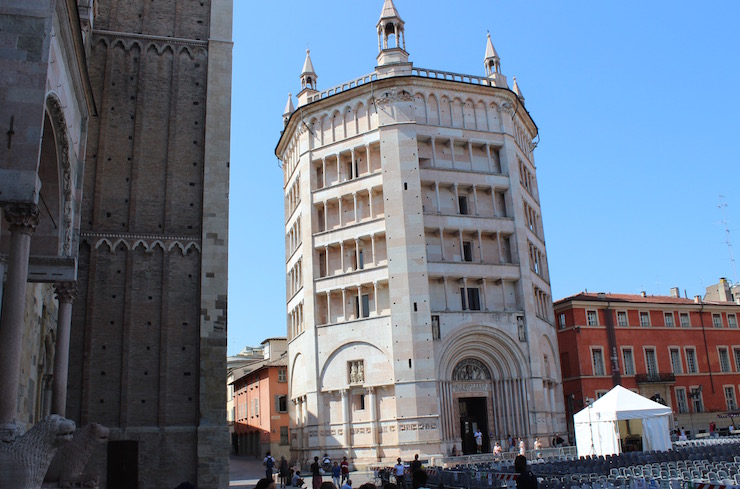 Where to eat in Parma

The only problem we had when eating out in Parma was in choosing where to eat – there are lots of options and we knew that everywhere would be good. On our first evening in Parma we walked to a restaurant which Francesca had recommended: Osteria dello Zingaro. I was surprised when my husband and son went for a very local dish: they ordered horse meat and said it was tasty. My daughter and I don’t eat meat so opted for a dish of various vegetable antipasti instead.

We had an excellent and cheap lunch at a place called Frank Focaccia which specialises in – you guessed it – focaccia. We went to the marvellous Gelateria Emilia a couple of times for ice-cream – the first time we went there my son said: ‘I’m in heaven’. On our second evening my husband and I went for an early evening aperitif and were offered complimentary snacks from the bar. 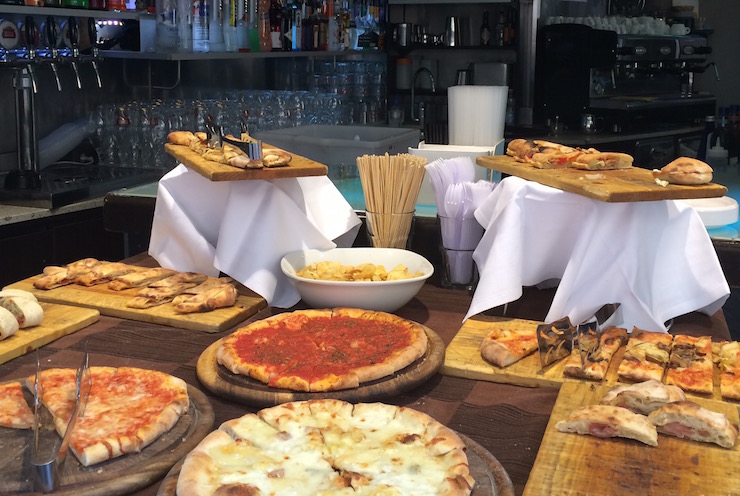 To help us to drink our aperitivo. Copyright Gretta Schifano

Later on we all we went to la Forchetta for dinner. The kids and I had home-made spaghetti with fresh tomatoes, basil and ricotta and it was delicious.

(Click on the links to read my posts about the rest of our trip). After a couple of days in Parma we set off to explore more of Emilia-Romagna. We drove to the city of Bologna, stopping on the way at a parmesan factory, then at the Ferrari Museum and then at an agriturismo for lunch. We spent few days in Bologna and while we were there we went on a day trip to Florence by train. Next stop was the Adriatic coast for a week, staying at the marvellous Hotel Tiffany.  While we were on the coast we enjoyed trying out three different water parks: Atlantica, Aquafan and Mirabilandia.

I enjoyed visiting Parma and it was great that it was so un-touristy. I’d definitely recommend R&B Opera 11 as an excellent place to stay in the city. It was good having a tour guide to show us around.

My husband says: ‘I’ve always wanted to visit Parma because of its food and history. The tour was really interesting and the place where we stayed was very comfortable and central.’

My son says: ‘I liked it there, especially the ice-cream.’

My daughter says: ‘I liked where we stayed but it was too hot to go out.’

Disclosure: Our accommodation and tour guide in Parma were provided by the Emilia-Romagna Tourist Board for the purposes of this review. All opinions, words and images are my own.