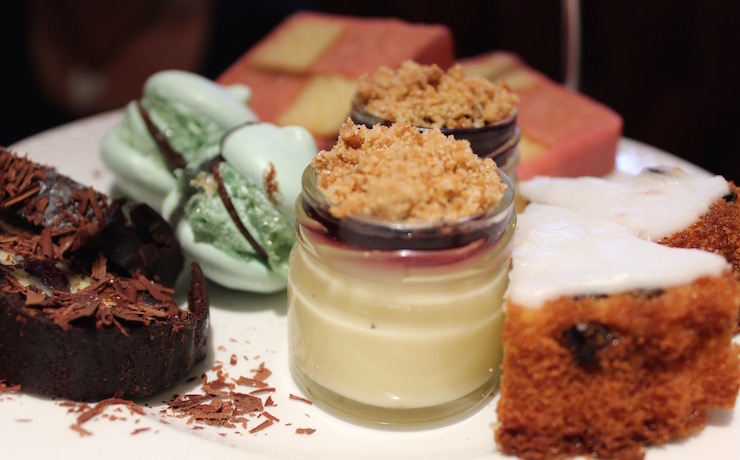 Afternoon tea is a British tradition which dates from the nineteenth century. Apparently the 7th Duchess of Bedford, a friend of Queen Victoria’s, started the custom of afternoon tea in a bid to satisfy her hunger until dinner. Initially afternoon tea involved something small to eat with a drink of tea. These days afternoon tea is offered in restaurants and cafes across the UK and is often a filling meal in its own right.

Afternoon tea is usually a delicious treat which I really enjoy and so when I was invited to review the afternoon tea menu at the Reform Social & Grill in London I was delighted to accept. I find that tea and cake always taste better when shared with friends and so I invited the lovely Jen Howze of Jenography, Afra Wilmore of madmumof7 and Nell Heshram and her three year-old daughter Gwen of the Pigeon Pair & Me to come along with me to help me try everything.

The Reform Social & Grill is on the ground floor of the Mandeville Hotel in Marylebone, not far from Bond Street. I was surprised when I walked in to the venue to find that it looks like an old-fashioned gentleman’s club. I don’t know what I’d been expecting but it wasn’t upholstered leather chairs, dark wooden furniture and a huge station clock. 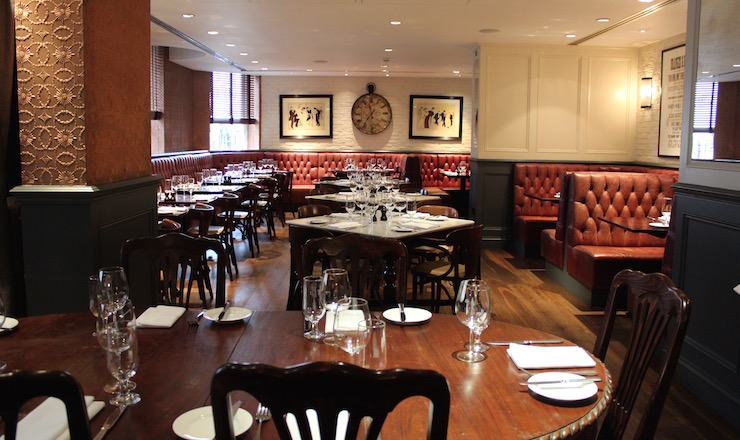 The staff were very friendly and helpful and happily parked Gwen’s scooter by the welcome desk so that they could keep an eye on it. (Although I think that it was pretty safe as none of the other guests were wearing the right gear for scootering – they all looked like they were having business meetings). 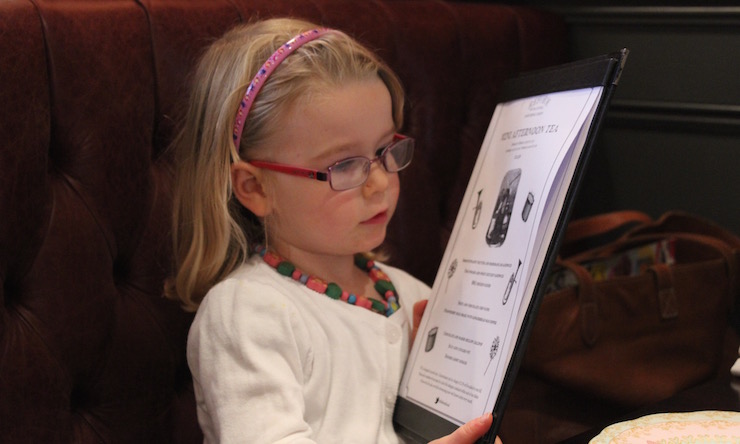 Gwen choosing what to have. Copyright Gretta Schifano

The adult teas all come with a ‘seasonal Bellini’ – we were offered either apple or peach and I chose an apple Bellini which was very green and very tasty. I chose Chamomile Citrus from the eight different flavours of tea to drink (the others were Reform Blend, Green Tea Passion, Organic Earl Grey, Jasmine Mist Organic, Pear Caramel Tea, Organic Mint Melange and Organic African Amber). My tea tasted light and refreshing and was served in a china teapot which was refilled when I asked for more hot water.

Afra’s ‘Savouries’ came first: the Gentleman’s Tea includes a sausage roll, steak sandwich with snails, and fish finger with mushy peas, which were served on a wooden board. After we’d all taken photos, Afra was eventually allowed to eat something and pronounced it all to be ‘gorgeous’. The Great British Vintage Afternoon Tea has sandwiches as its savoury offering. 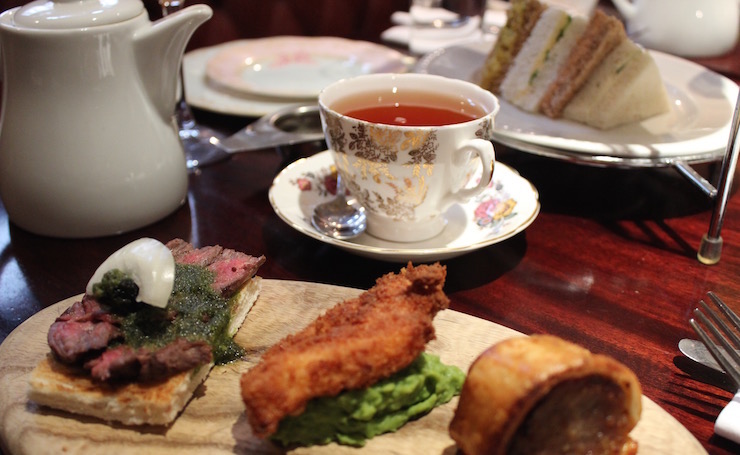 The cakes and sandwiches for the adults were served on china cake stands with three tiers. The bottom tier contained the sandwiches (coronation chicken; hot smoked salmon, cream cheese and chive; goats curd, chive and cucumber; egg mayonnaise with cress), which we all found to be a little bland, but perfectly fine.

The middle tier was my favourite as it contained freshly baked scones, still warm, with proper clotted cream and raspberry jam. The scones were light and delicious, especially when topped with jam then cream. 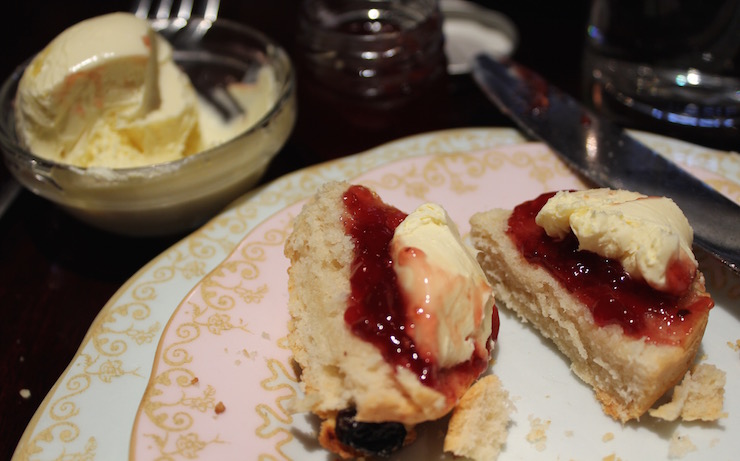 The top tier was the brightest, as it contained a range of colourful ‘fancies’ prepared in the kitchen: Somerset cider apple cake, Battenberg, Black Forest roll, After 8 meringue, Real ale and chocolate cake and Summer fruit custard pot. We all liked the Real ale and chocolate cake and agreed that the very green After 8 meringue just tasted of meringue. I found the Battenberg a little greasy but the lemony Summer fruit custard pot was zingy and refreshing. Nell said that she really liked the cider apple cake.

While the adults were busy photographing food and discussing flavours, Gwen was happily exploring her mini afternoon tea. She said that her favourite thing was the strawberry milkshake, which was served in a tall glass with two straws. Gwen was given some biscuits, a scone, a mini pot of jam and a pot of chocolate mixed with meringue which was served in an attractive tin lunchbox. She also had a board with a peanut butter (I’m not sure if this is wise given the prevalence of nut allergy) and jam sandwich and a halved brioche sandwich filled with fishfinger on one side and BBQ chicken on the other. The mini afternoon tea portions are very generous and this could be a reasonably balanced and filling meal for a child. 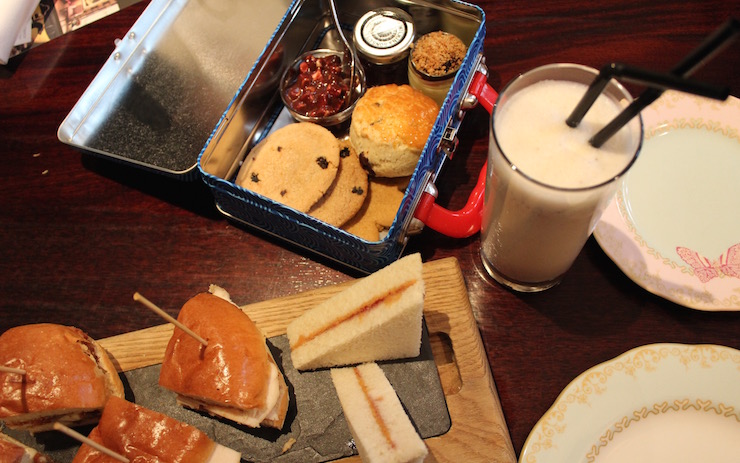 I enjoyed afternoon tea at the Reform Social & Grill. The atmosphere is relaxed, the food is good, the portions are generous and it’s in a central location. The mini afternoon tea is a great option for kids.

To read what Afra thought about our experience you can check out her post here, and you can read Nell”s detailed review here. 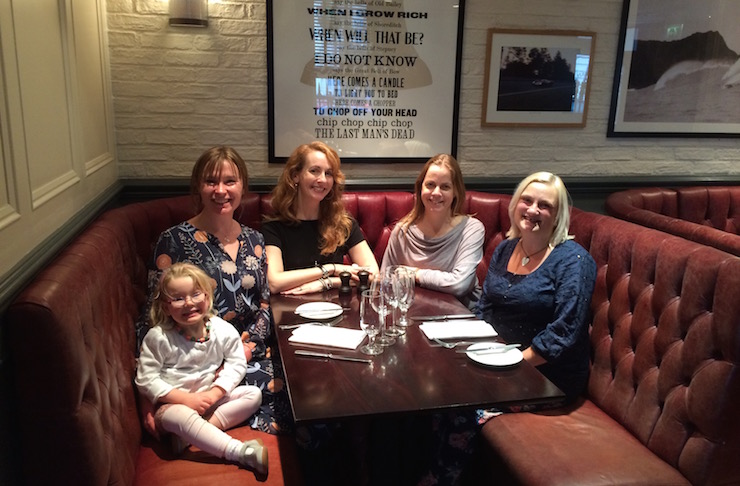 Is there anywhere that you’d recommend for afternoon tea with kids?

Disclosure: I was a guest of the Reform Social & Grill for the purposes of this review.