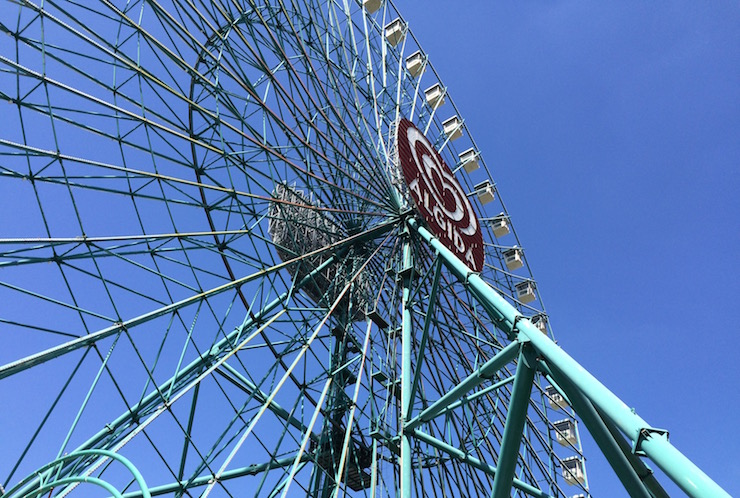 This summer we went to Emilia-Romagna in the North of Italy for our family holiday. Before we went to the region I hadn’t realised that it’s home to a wide range of family attractions. While we were there we went to three different water parks: Aquafan, Atlantica and Mirabilandia Beach.

Mirabilandia Beach is at Mirabilandia theme park, the biggest theme park in Italy, near to Ravenna. It took us about 30 minutes to drive to Mirabilandia from our hotel in Cesenatico. Mirabilandia opened at 10am and the Beach opened at 11am. We were there just before 10am and had planned to go on some of the theme park rides and then go to the water park to cool off later. But our day didn’t turn out as planned.

Mirabilandia has some world class rides, (Divertical, the highest water coaster in the world, iSpeed, which accelerates from 0 to 100 km/hr in 2.2 seconds and many more) and attracts large numbers of visitors. It was a very, very hot day and the queues for the rides were extremely long. So, rather than wait in line for an hour at a time in the heat (although the queuing ares are shaded), we decided to focus on the water park instead and see if the queues for the rides at Mirabilandia were shorter later on.

As soon as Mirabilandia Beach opened at 11am we were in there. We walked around the park to find a place in the shade where we could base ourselves for the day. There are sandy areas where you can sit but we found a pleasant, shady spot under a tree in a grassy area and positioned four sun loungers there. 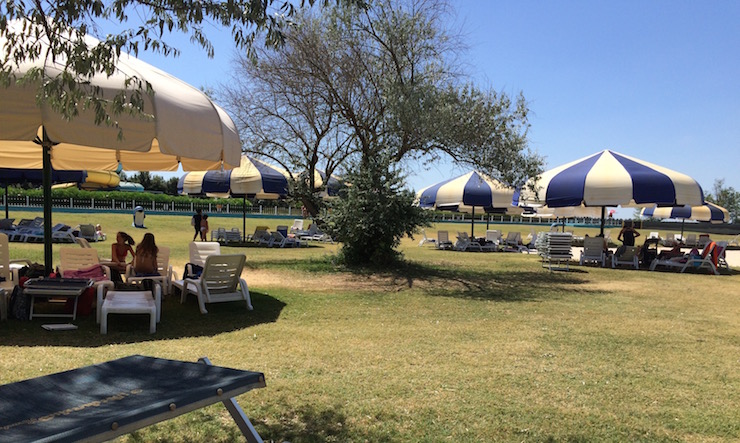 Sitting in the shade at Mirabilandia Beach. Copyright Gretta Schifano

The Beach has two main parts. The first is a large pool with both shallow and deep areas and some mid-level water slides at its centre. As you climb up and queue for these slides you are drenched with a torrent of water which pours down constantly from above. 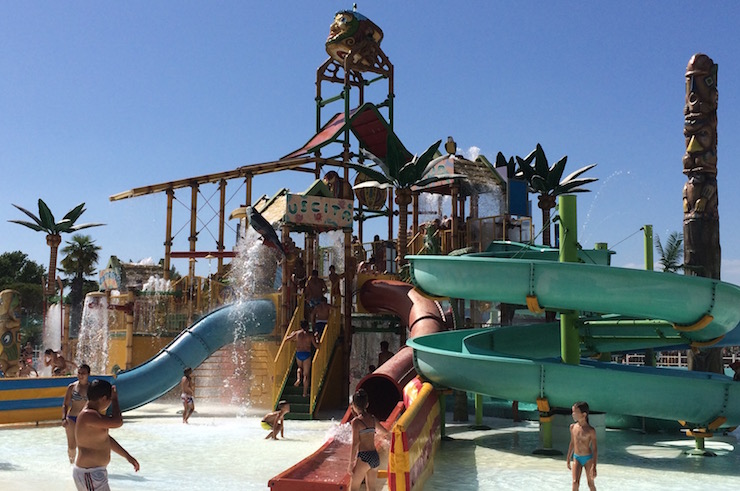 We enjoyed this as we needed to cool down but I did see a couple of small girls on there who were crying because of the weight of the water that was pouring down on to them – I think that these slides are a bit tough for some little ones.

The second main area of the Beach has height restrictions and is a tower which has four different slides coming down from it. The slides deliver you straight into a lazy river. 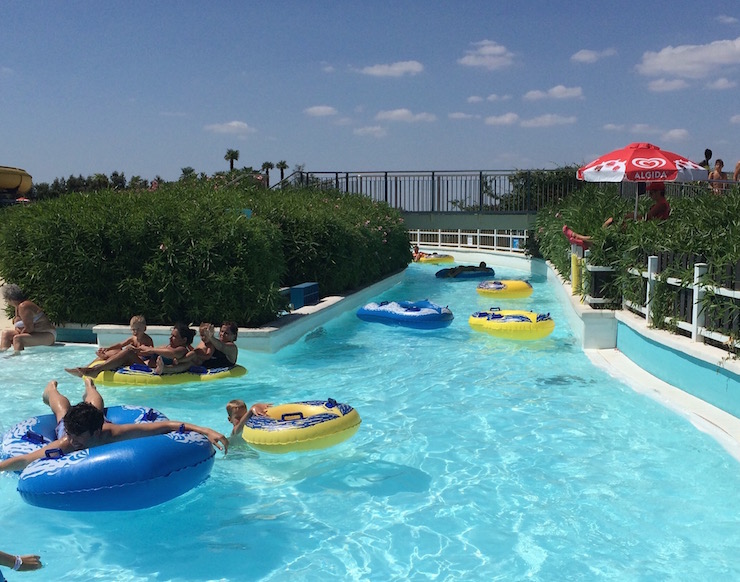 It took us about 10-15 minutes to queue each time we went on these slides. You have to sit in either a double or a single inflatable ring to use the slides – and you’re not allowed to go down a double-ring slide on your own. It was great fun going down the slides, although none of us were brave enough to try the really steep one which is shaped like a giant V.

You can’t wear a hat when you go on these slides and the lazy river at the end has no shade. My head felt like it was burning by the time I got out of the river but my husband and kids were fine.

We had lunch from the cafe at the Beach and I was surprised by the poor quality of the food which I had. My tuna and egg sandwich was tasteless and the bread was like cardboard. My daughter had a pizza which she said was ‘OK’. If I visited the park again I’d take a picnic.

Later in the afternoon we went back in to Mirabilandia to see if we could go on some rides but the queues for the most popular rides were still just as long as they had been earlier. We went on a couple of smaller rides where we only had to wait for about 15 minutes, and they were great.

There are various shows at the park and we went to see the Hot Wheels stunt show. 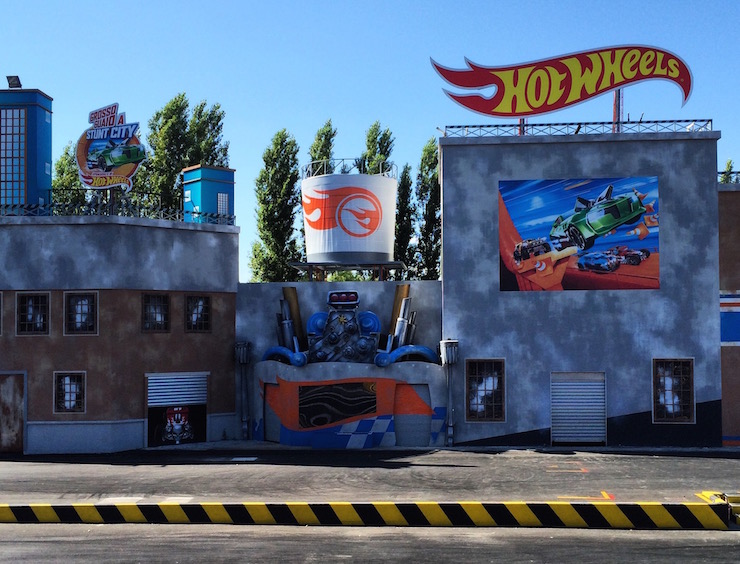 The show was spectacular and and we all enjoyed it. We agreed that it reminded us of the car stunt show that we saw at Walt Disney World’s Hollywood Studios in Florida a couple of years ago.

We spotted this water ride as we were leaving the park that evening: 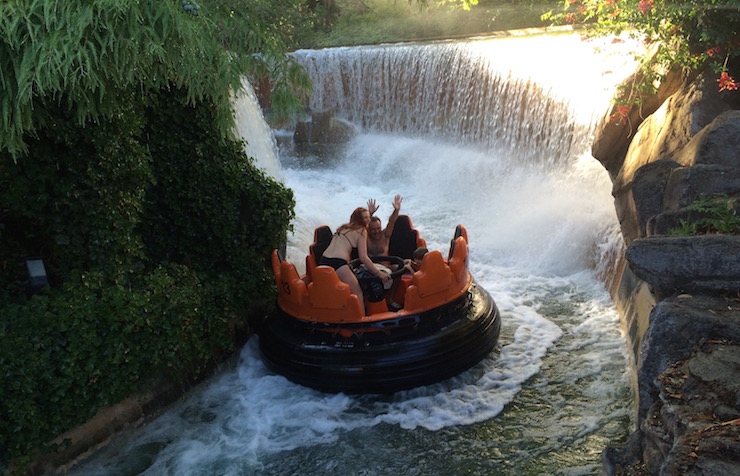 One of the rides at Mirabliandia. Copyright Gretta Schifano

Family tickets (two adults & two children under 150 cms tall) for Mirabilandia and Mirabilandia Beach cost from 89 euros if booked online. This includes free entry the day after your visit, as long as you get your ticket validated before you leave the park. Parking is five euros per car. There’s no charge to use the sun loungers and sunshades.

My daughter says: ‘The queues were too long but I liked the lazy river.’

My husband says: ‘The water park was relaxing but I was disappointed that we didn’t manage to do much at the theme park. I’d have liked to have gone on some of the big rides.’

I say: ‘I liked the Beach, especially the big slides. It was disappointing that we didn’t experience many of the rides at Mirabilandia. If we went there again it would have to be outside of peak season or we’d need to buy a Fastpass to avoid the queues.’

Disclosure: The Emilia-Romagna Tourist Board arranged for free entry for us to Mirabilandia and Mirabilandia Beach for the purposes of this review. All options and images are our own.

You can read more about our trip to Emilia-Romagna in these posts: