Home / Type of trip / City / A train trip to Florence 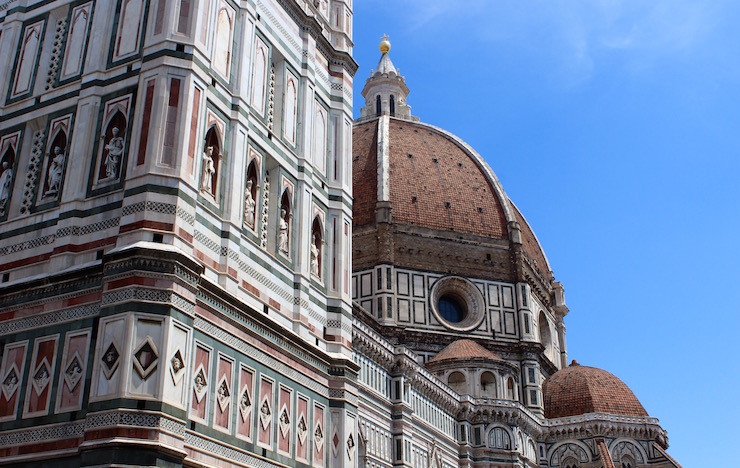 One summer we went to the Emilia-Romagna region of Italy for a family holiday. We spent a few days in the beautiful city of Bologna while we were there. I’ve written several posts about our trip (the links are at the bottom of this page), but this post is about our day trip to Florence from Bologna by train.

Emilia-Romagna is in the northern part of Italy, below Venice and above Tuscany. Bologna is the region’s capital, and has fantastic train connections to other parts of Italy. This makes it a great place to base yourself if you’re exploring Italy, especially as it’s much less touristy and, therefore, much cheaper than some of its famous neighbours (I’m looking at you, Venice and Tuscany).

I have happy memories of travelling by train in Italy. When I lived In Italy, as a student and then as an English teacher, my friends and I used to travel by train to different places in Italy, and beyond, whenever we got the chance. I then spent the summer after graduation interrailing around Italy with my boyfriend (now my husband). So when I learnt that Bologna is one of Italy’s main railway hubs, I decided that we’d have to go on a family train trip while we were staying there, even though we had a hire car.

It was very hard to decide where to go on our train trip, because Bologna is so very well connected by rail to so very many marvellous places. You can get to Rome from Bologna in less than two hours by train. Venice is just over an hour away, Turin two hours. I’ve been to all of these places, but I want to go to all of them again, because they’re fantastic (as is Bologna). It was impossible to choose between so many marvellous possibilities. In the, end we let our 17 year-old daughter decide where we should go on our railway trip, and she opted for the gorgeous Renaissance city of Florence in Tuscany, 35 minutes and around 70 miles away by train. I was delighted by her choice. Both my husband and I studied in Florence, at different times, but we’ve never been there with the kids, and I was really excited about taking them there. The historic centre of Florence is a UNESCO World Heritage site and is where the Renaissance came to be – it’s just an amazing place to experience.

We bought our tickets at Bologna station the evening before our trip and were on the 10.03 train from Bologna to Florence the next morning. The train was comfortable, clean and, crucially given the summer heat, air-conditioned. We had four seats around a table, with reading lights and charging points should we need them. A screen nearby showed us our route, progress and speed: the fastest speed which I saw displayed was 243 km/hr. 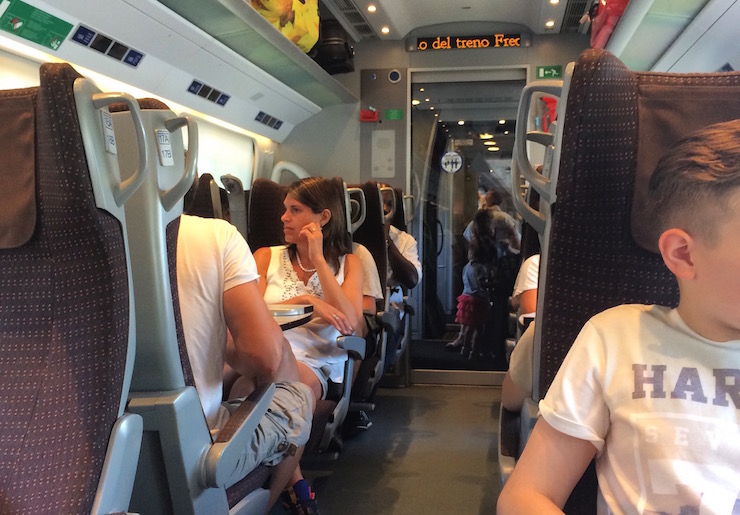 On the train from Bologna to Florence. Copyright Gretta Schifano

We seemed to spend much of the journey in tunnels, and we arrived at Santa Maria Novella station in the centre of Florence after just 37 minutes.

Florence is one of Europe’s greatest art centres and it was looking as breathtakingly beautiful as I remembered – but it was very hot, and very full of tourists. Five days into our trip, this was the first time that we’d ventured out of Emilia-Romagna, and it was the first time that we’d seen anyone other than Italians. We had no desire to drag the kids around any of the museums or galleries, and decided instead to explore the city on foot. Florence is very compact and it’s easy to find your way around.

We started off at San Lorenzo street market so that I could buy some marbled paper notebooks. 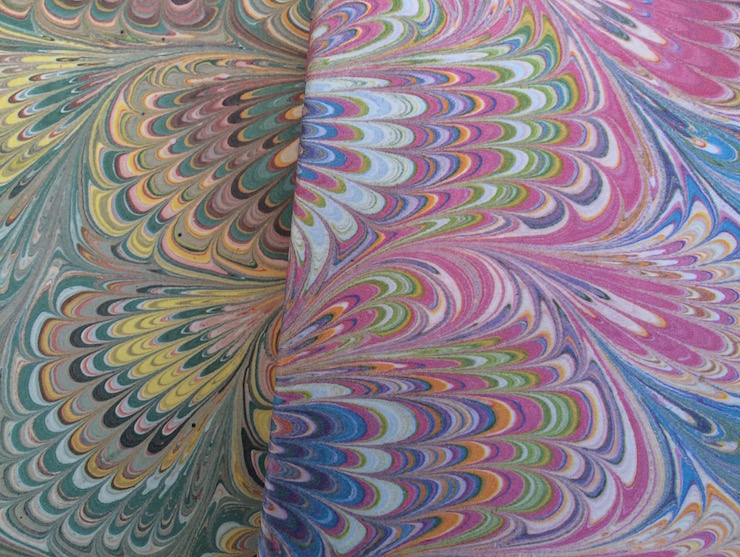 Marbled paper is handmade in the city and I think that it’s gorgeous. We ambled along to the famous Duomo, the Ponte Vecchio and the Piazza della Signoria, with many photo stops on the way. 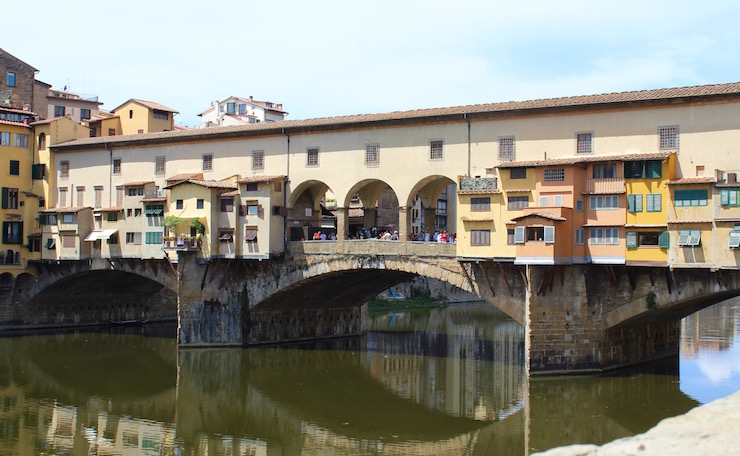 We stopped for lunch at a cafe near the Boboli Gardens (40 euros, around £28, for four sandwiches and some still water) and I realised that the kids had had enough of traipsing around. My husband, however, was still keen to explore and revisit the city where he’d spent a happy year as a student.

So, after lunch we wandered back to Piazza della Signoria and found a shady spot under a beautiful portico where we sat for a while. 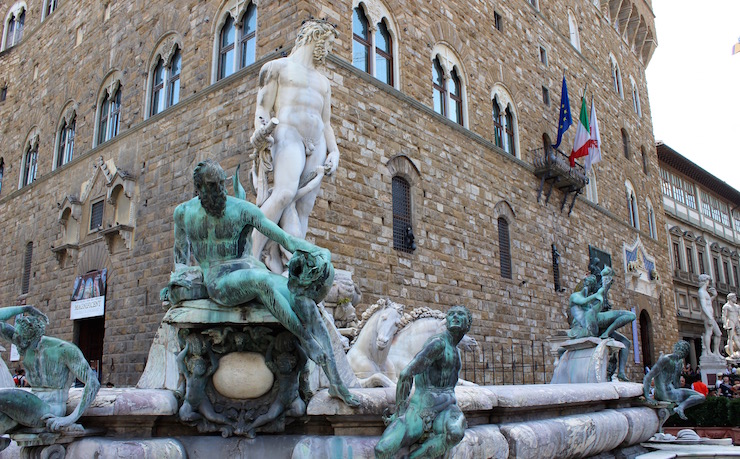 I stayed there with the kids while my husband set off with the camera to walk up to Piazzale Michelangelo, which offers panoramic views of the city. 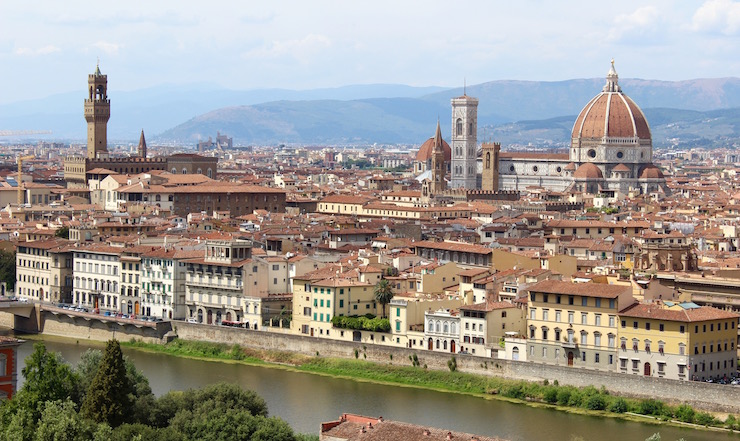 We agreed to meet at the station to catch our 4.30 train back to Bologna. The kids and I went to look in some of the city’s designer shops and then went to have an ice-cream on our way to the station. The train was half an hour late in leaving Florence, but it was interesting waiting at the station and watching the comings and goings. My son was delighted when the local Serie A football team, Fiorentina, suddenly strode through the station en masse. He and my husband followed them outside and watched as they boarded their team bus.

I loved going back to Florence – although I’m glad that we weren’t staying there, because it was so very busy. The train journey was very straightforward and it’s great that you can easily reach so many places by train from Bologna.

My husband says: ‘It was good to see Florence again and to show the kids around. It was really easy getting the train. Parking in Florence would have been difficult.’

My daughter says: ‘The train was a lot better than I’d excepted it to be. It was really handy to get the train. Florence was nice, but it was really packed with tourists. It was fine wandering around like we did.’

My son says: ‘I liked seeing the Fiorentina footballers at the station’.

Our return tickets from Bologna to Florence on a high speed Frecciargento train cost 48 euros (around £33) per person and cost nothing for my son because children under 14 years old travel for free on these trains (n.b. child discounts vary across train companies in Italy).

If you’d like to read more about our summer trip to Emilia-Romagna, check out these posts:

, which I bought from Amazon before our trip, and the Tuscany Marco Polo Guide,

which I was sent to review last year.

You can search for and book Florence accommodation here. 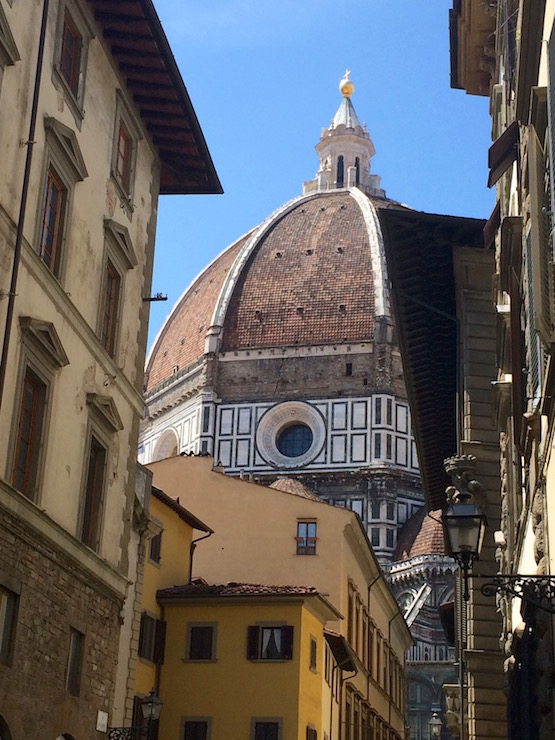