Home / Tips & ideas / Charity / How you can help UNICEF 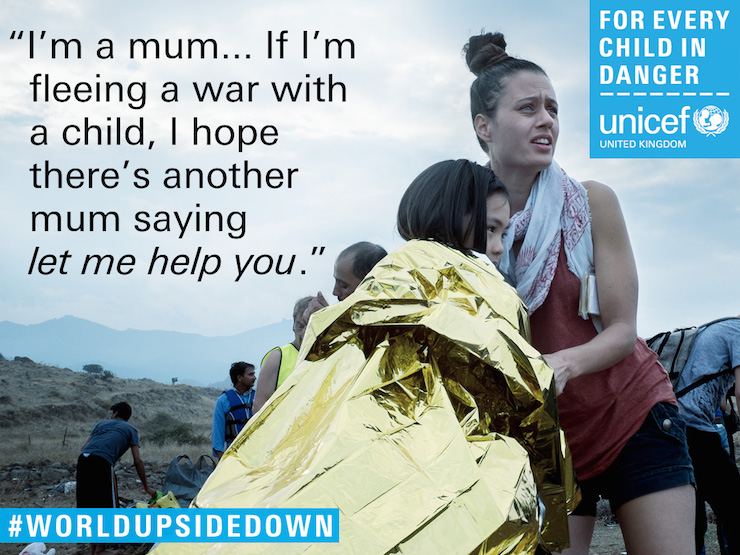 Currently around 30 million children have been forced from their homes because of conflict and violence, according to the United Nations. One in 10 children now live in conflict-affected areas (an estimated 230 million children worldwide), in places like Syria, South Sudan and Yemen. Children are being killed while they’re at school. They’re being forced to become soldiers. They’re being orphaned by natural disasters and war. They’re living as refugees.

Ahead of the very first World Humanitarian Summit, UNICEF has launched the #WorldUpsideDown campaign to highlight the importance of protecting children in emergencies. Children like Mustapha from Syria. Mustapha is 13 years old, the same age as my son:

A parent’s most basic instinct is to keep their children safe: that’s why millions of parents and children, like Mustapha, are fleeing from conflict as refugees. I can’t imagine what it must be like to be in that position, but my heart goes out to Mustapha and the countless others like him. When UNICEF got in touch to ask me to highlight their #WorldUpsideDown campaign, I was happy to help.

UNICEF (the initials stand for United Nations International Children’s Emergency Fund) was founded by the United Nations after WWII in order to provide food, clothing and healthcare to the countless children who were facing disease and famine in 1946. UNICEF has been working to protect children who are in danger ever since, and now works in more than 190 countries.

I’m happy to help UNICEF. I know that I’m lucky to be living in the peace and prosperity of the UK in the 21st century. I know that it could easily be me and my family fleeing for our lives, or my children living as refugees, had I been born in another part of the world. I’m happy to help, because I can’t bear to think of the millions of children who are in danger right now.

In the face of the current staggering levels of world conflict and disasters, UN Secretary-General Ban Ki-moon has announced that the first ever World Humanitarian Summit will be held in Istanbul in May 2016. The summit will bring together governments and humanitarian organisations to try to find humanitarian solutions to the world situation.

How you can help

UNICEF’s #WorldUpsideDown campaign aims to raise awareness of the importance of protecting children in emergencies – and you can help, right now. UNICEF is asking UK citizens to sign a petition calling on Prime Minister David Cameron to make protecting children from violence a priority at the World Humanitarian Summit. You can sign the petition here:

If you’d like to, you can also make a donation to UNICEF to support their work in protecting children:

Thank you for reading.