Home / Brexit / How should I vote in the EU referendum? 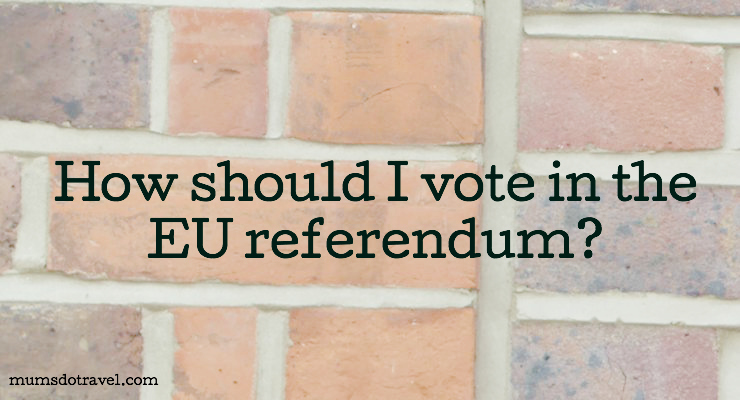 On Thursday, June 23rd 2016, should I vote for the UK to leave the European Union? Or to remain?

My instinctive answer is that I’ll vote for us to remain, of course. Because, putting politics aside, our country is a peaceful and prosperous place where I’m happy for my children to grow up. Why would I do anything to put that peace and prosperity, and my children’s future, at risk?

But the decision on how to vote in this referendum is too important to make on the basis of instinct. My instinct may be wrong. It may be that our future peace and prosperity is more assured outside the EU than within it. Many people, including some of my own relatives, seem to think that we should leave the EU. So, out of respect for the opinion of others, I’ve decided to do some research to see if my instinct is justified. I’m taking no notice of what any of our politicians are saying. I want to know what independent experts think about the key issues of the economy and security.

Apparently we have the seventh largest economy in the world. Which sounds pretty good to me, considering that we don’t even feature in this list of the 50 largest countries in the world by area, and that we have the 23rd largest population in the world, according to this list. Being in the EU seems to be working for our economy. But I’m no financial expert.

Unlike Martin Lewis OBE, campaigning journalist and founder of Money Saving Expert. He’s published this excellent, detailed blog post about the possible economic risks and benefits of a vote either way: How to vote in the EU referendum. I’ve read the article carefully, and one part stands out for me. Martin says: ‘A vote for Brexit is unquestionably economically riskier than a vote to remain.’ He also says:

‘If you’re thinking you don’t want to take the risk the economy could go bad, vote IN.’

I definitely don’t want to take that risk – thank you for the advice Martin.

The European Union was set up after the Second World War with the aim of ending the frequent wars which had taken place on our continent for centuries. In this aim it has succeeded, so although my Dad can remember his home being destroyed by German bombs during WWII, my children and I have been lucky enough to grow up in a time of peace. We should not take this peace for granted. But I’m no security expert.

Unlike the group of senior British former military commanders who wrote to The Telegraph recently. Their letter urges us to vote Remain in order to protect our national security. The letter says: ‘Europe today is facing a series of grave security challenges, from instability in the Middle East and the rise of Daesh, to resurgent Russian nationalism and aggression.’ It continues: ‘Britain will have to confront these challenges whether it is inside or outside the EU. But within the EU, we are stronger. Inside it, we can continue to collaborate closely with our European allies…’

So my instinct on the question of security is right – thank you military guys.

I’ve not mentioned immigration. That’s because immigration isn’t a factor in my decision on which way to vote. I’m ashamed of the anti-immigration rhetoric which is flying around at the moment, and of its racist tone. I’m irritated by the apparent presumption in the media that we all see immigration as a negative thing. I reckon that most of us are immigrants if you go back far enough. And if we weren’t, if everyone stayed in their own countries for ever, the world would be the poorer for it.

But if you are concerned about immigration, you should check out this well-researched post by Nick Carter-Lando: Immigration and the EU Referendum. Nick studied Politics, Philosophy & Economics at Oxford, and his post looks at the effect of EU immigration on the UK and finds that it’s really not the big problem that some politicians are making it out to be.

So, should I vote for the UK to leave the European Union? Or to remain? What’s the best thing to do, for the future of our country and our children?

Having researched the arguments, I’m in no doubt as to the right thing to do. On Thursday 23rd June, 2016, I’m voting for the UK to remain in the EU.