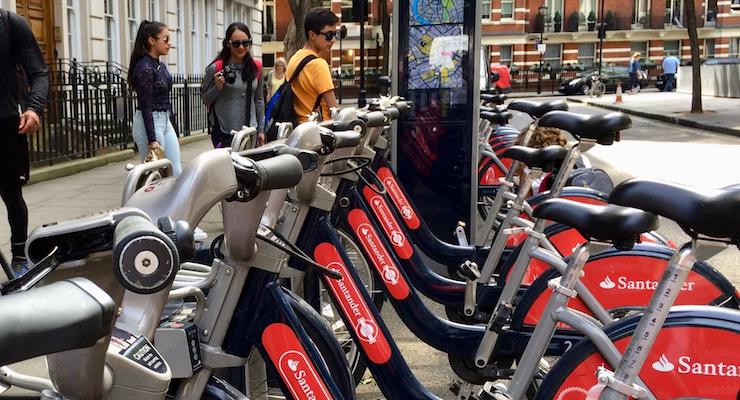 If you’ve visited London over the last few years, you may have noticed clutches of chunky hire bikes sitting at docking stations and being ridden around the city. These public bikes (annoyingly known as ‘Boris bikes’, after the mayor who was in post at the time that they were launched) are currently sponsored by Santander, and are adorned with the bank’s red logo.

I visit London fairly often, and I enjoy cycling, but I’d never hired one of these bikes. I’d thought about it, but was slightly nervous about how safe it would be to cycle in the city, and about finding my way around, as I’d never driven or cycled there. When I mentioned this to my friend Anne, she suggested that we should try the bikes together, and we booked a date. This was very kind of Anne – she’s a 2016 Paralympic gold medal-winning paracanoeist, as well as a former champion endurance cyclist, and she’s in high demand as a motivational speaker (check out her blog here). Whereas I passed my Cycling Proficiency Test when I was 10 years old, have never won a sporting medal or certificate, and am mostly in high demand to find clean socks for my 14 year-old.

Anyway, we decided not to plan our trip before the day, but to work out what to do once we arrived in the city, so that we could see how easy it is to spontaneously use these bikes. We took cycling helmets and water with us. We took a train from our home town to London Bridge and then headed to Absolutely Starving, a great cafe on nearby Tooley Street. Over coffee and very good cake, we each downloaded the free Santander Cycle app to our phones and created a Santander Cycles account. This was quick and easy to do – you just need your personal information and bank details to set up an account. It costs £2 per day to use the bikes for unlimited journeys of 30 minutes. If you have a bike for more than 30 minutes, you are charged another £2 each time.

Next we needed to decide where to go. We wanted to avoid busy roads and ideally use routes with cycle lanes. On the Transport for London website we found a page with details of London cycle leisure routes. We chose ‘Quirky London – Step away from the tourist clichés and discover the quirky side of the capital’ and decided to follow that.

We were now ready to go, and so looked on the app for the nearest docking station. The app told us that it was at Duke Street Hill, just along the road from the cafe. We booked some bikes from there via the app and were each sent a four-digit code to use within 10 minutes to unlock a bike. We walked up and down Duke Street Hill but could see no bikes. Confusingly, we eventually found the docking station on Tooley Street, which is parallel to Duke Street Hill. From then on we made sure that we found the bikes before we hired them.

Using the codes that we’d been sent, we unlocked two bikes, and pulled them out of the docking station. This is quite hard to do as the bikes are heavy – I had to help Anne to get hers out. We then adjusted the seat heights (Anne had to help me to do this as I couldn’t work out how to tighten the lever so that the saddle stayed in place) put on our helmets, and set off along the road. 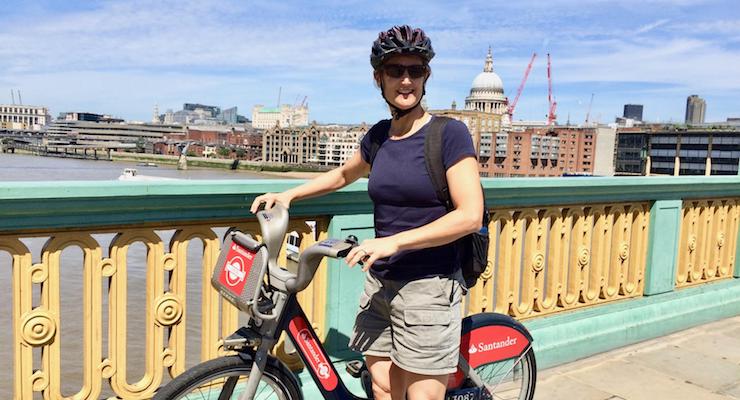 Straight away we found that it was difficult to follow the directions from the TfL site, because they were written in paragraphs. We found ourselves constantly switching between the TfL website, and the Santander Cycles and Google Maps apps in order to follow the Quirky London route. We’d stop and read the directions, memorise three or four steps, then stop after that to work out the next stage. What we really could have done with was an app which spoke to us and told us which way to go, but which didn’t make us go on the busy main roads.

We soon made progress though (albeit quite slowly), and the route took us to some very interesting places, including Crossbones Graveyard (a pauper’s burial ground which dates from medieval times), St. Bartholemew’s (London’s oldest church) and the Hunterian Museum. Every so often we docked our bikes so that we could look around, then took out new ones when we were ready. 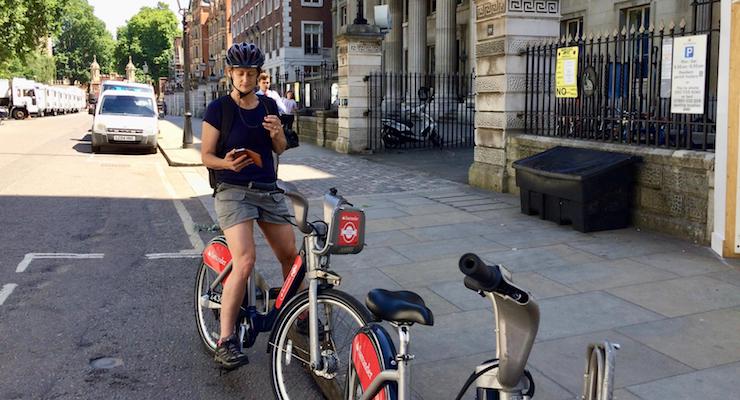 Anne working out where to go next. Copyright Gretta Schifano

I noticed that although there are lots of cycle lanes in London they are mostly meaningless, as they are just part of the road and are often blocked with parked vehicles. The only proper cycle lane which we used was on a bridge across the Thames, where a barrier separates the cycle lane from the other traffic.

We stopped for lunch at Bread Ahead bakery in Seven Dials – fresh ciabatta with mozzarella and tomato hit the spot. From there we cycled to Trafalgar Square and along Pall Mall to Buckingham Palace – we wanted to pedal through St. James’ Park, but cycling’s not allowed there, sadly. Soon after that we were at Victoria Station, docking our bikes for the last time that day before catching a train back home.

I enjoyed cycling around London, and the drivers were much more accommodating than I’d expected, even though we were going quite slowly. It’s cheap and easy to hire the bikes, but it’s tricky finding your way around once you’re cycling. The bikes are slightly heavy to manoeuvre but all of the ones which we used were in good condition. As there don’t really seem to be many proper cycle lanes in London, I think that you need to be an experienced cyclist and road user to cycle safely there. I wouldn’t do this with children. If I do this again I’ll take time to plan my route as much as possible beforehand.

Anne says that she thinks that there should be more instructions about using the bikes, such as how to adjust the saddles. 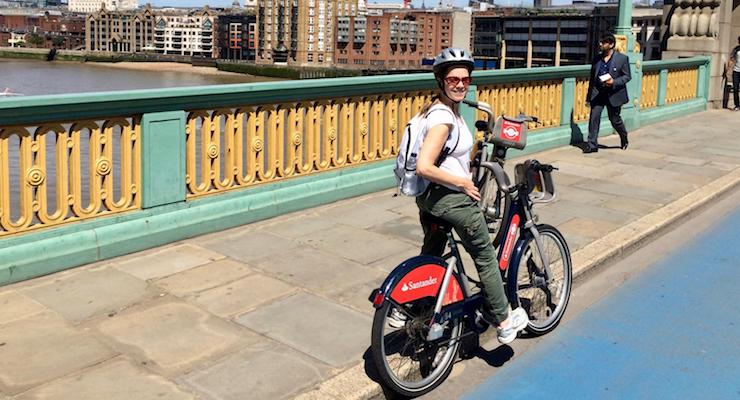 Check out some of my other cycling posts:

Kent cycling holiday: staying in a fisherman’s hut in Whitstable

Travel tips and ideas for a weekend in Copenhagen

I publish a monthly roundup of interesting things to do in London with kids – click here for the current version. 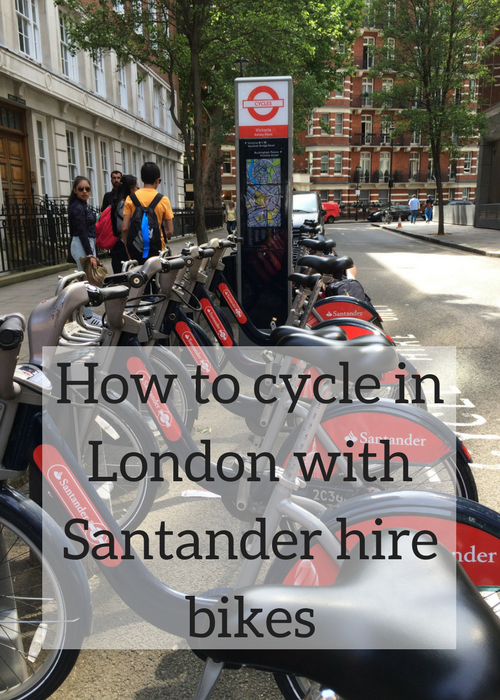