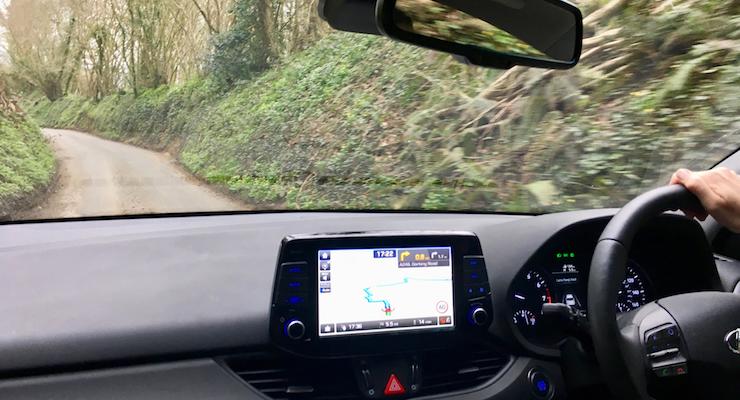 The Pilgrims’ Way is an ancient route in the South of England, connecting the shrine of St. Swithun in Winchester Cathedral with the shrine of the martyr St Thomas Becket in Canterbury Cathedral. It’s impossible to know how many pilgrims followed this route in medieval times, but historians believe that as many as tens of thousands did so each year. In 1538, pilgrimages were abolished as a result of Henry VIII’s Reformation, the shrines of St. Thomas Becket and St. Swithun were completely destroyed and the offerings left by pilgrims were taken by the King.

These days much of the Pilgrims’ Way (it’s hard to know its precise route, but it’s around 133 miles long) has become roads. Some of the ancient route is still accessible for walkers, especially along the North Downs Way, and St. Swithun’s Way.

The Pilgrims’ Way passes within a few miles of our village. When Hyundai lent me a nippy i30 hatchback to try out for a few days I realised that it was a perfect opportunity to explore this ancient trail. 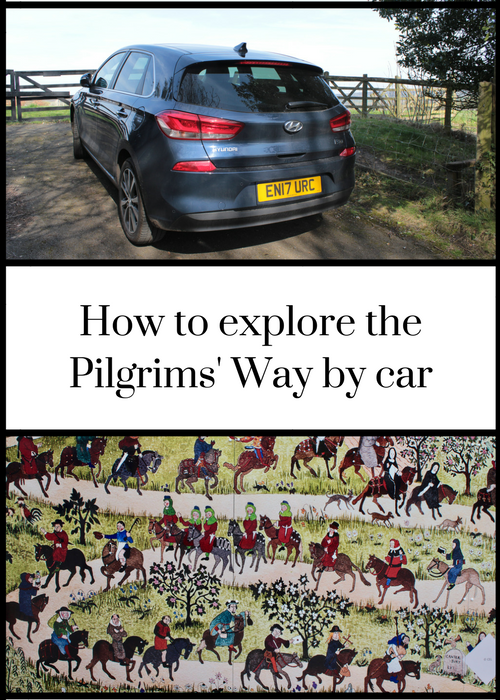 I’d love to walk the whole route if I ever have time, but for this trip I had two days to see as much of it as I could. My 19 year-old was home from Uni and keen to come along for the ride. The route combines city centres and country tracks, so we packed our wellies and waterproofs.

We divided our trip into two parts, covering Hampshire and Surrey on one day and Kent on the other. As we live near the Pilgrims’ Way, we didn’t need to stay anywhere overnight. If you’d like to follow our route, you could do it in a different order, or you could spend longer than we did in some of the places, or you could miss out some of the places where we stopped. There’s a map at the end of this post showing where we went.

Winchester was the Anglo-Saxon capital of England and is a fascinating city to explore. We started our Pilgrims’ Way journey at Winchester Cathedral. We parked the i30 in the Park & Ride car park on the outskirts of the city and took a bus to the city centre.

Winchester Cathedral was consecrated in 1093 and is one of the largest cathedrals in Europe. It’s a magnificent place and its architecture reflects its centuries of evolution, from the medieval floor tiles to the soaring Gothic nave. 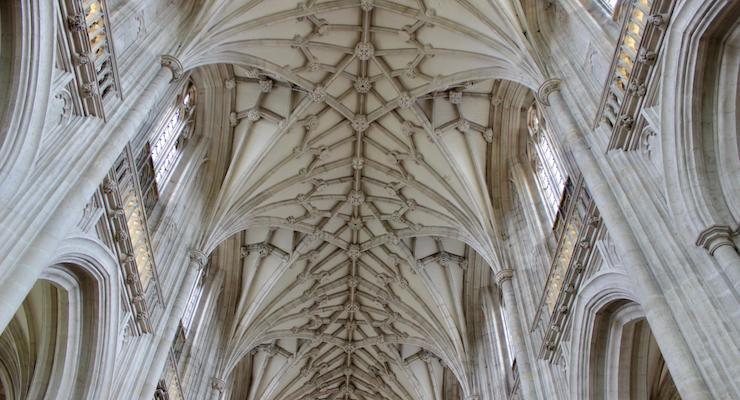 After seeing the ‘Holy Hole’ (yes, that really is its name) which pilgrims used to crawl through in order to be close to the bones of Saint Swithun, I made my own pilgrimage to author Jane Austen’s grave, which is also in the cathedral. Jane Austen died in the city in 1817 at the age of 41, but her clever novels are still hugely popular today.

We walked from the cathedral to St John the Baptist Church, half a mile away. This small, homely place is said to be the oldest parish church in Winchester and the first or the last church visited by medieval pilgrims on the Pilgrims’ Way, depending on which way they were travelling. There’s a scallop shell, a Christian symbol of pilgrimage, carved into the churchyard gatepost. We walked up the road from the church to leafy Beggar’s Lane where, in medieval times, poor people would ask for alms from pilgrims. 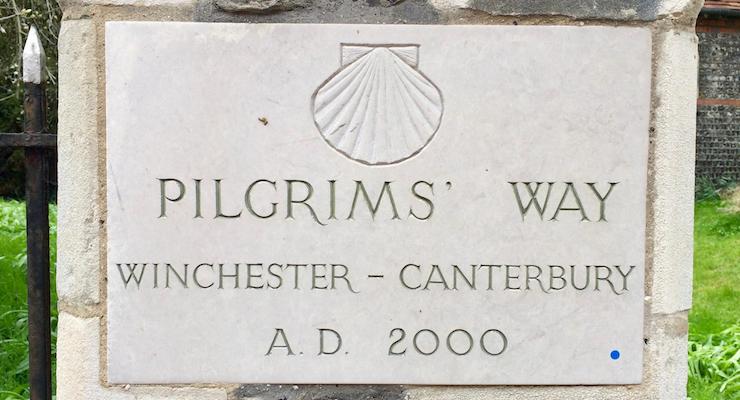 Our next stop was St. Martha’s Church, high up on the North Downs near Guildford, 39 miles away. The church is a few hundred yards from the nearest road, but the Hyundai’s excellent SatNav took us straight to St. Martha’s Hill car park in the woods at the bottom of the hill. We put on our wellies and walked up the hill to the church. Apparently on a clear day you can see eight counties from the churchyard. It was a sunny, hazy day when we visited, but the views were still great. 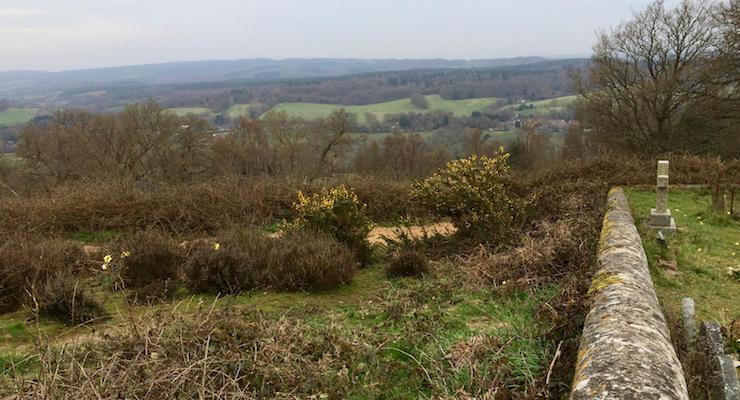 By this point we were hungry, so drove to The Withies Inn, Compton, five miles away, for dinner. Compton is on the Pilgrims’ Way and the pub dates from the sixteenth century, so travellers will have been stopping off here for centuries. It’s very cosy and welcoming inside – we sat by the fire while we decided what to order. When we asked about vegan and vegetarian options, the manager offered a few suggestions which weren’t on the menu. We decided to share a whole globe artichoke to start, then my daughter had vegetable kebabs and I chose mushroom stroganoff. It was all delicious, and I’d definitely recommend this pub for non-meat-eaters. 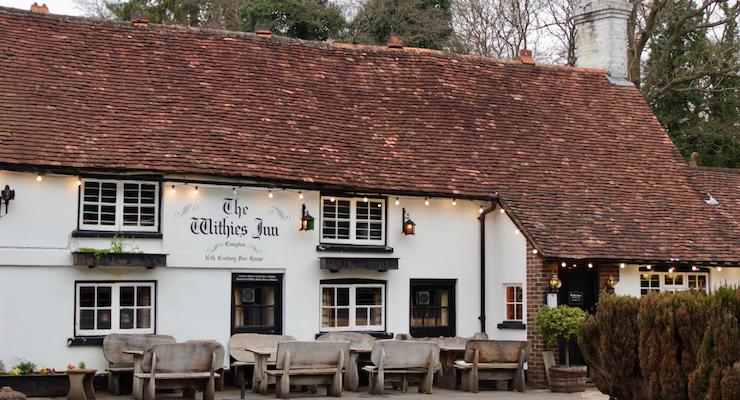 Canterbury has been an important Christian city since the Pope sent Augustine to convert the Anglo Saxons to Christianity in the sixth century. After Thomas Becket, then Archbishop of Canterbury, was murdered in the Cathedral by King Henry II’s knights in 1170, the city became one of the most popular pilgrimage destinations in Europe.

Canterbury Cathedral, the oldest cathedral in the country, is the seat of the Church of England and is a UNESCO World Heritage site. We parked by the city’s Roman walls and walked to the cathedral, three minutes away. 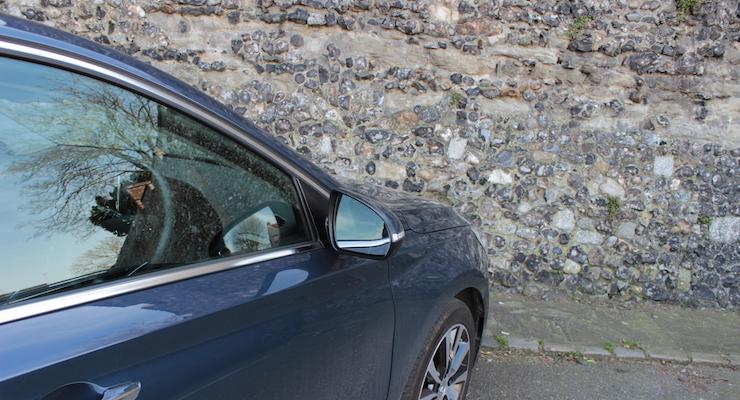 We had an excellent tour with one of the official guides, a very knowledgeable lady called Pam Wait. Pam said that in the thirteenth and fourteenth centuries a pilgrimage was ‘a holiday of a lifetime’, and that pilgrims would queue down the street to come in to the cathedral and pray at St Thomas Becket’s shrine. Pam showed us the route that the pilgrims would have taken once inside the vast building – she said that the cathedral’s resident monks wouldn’t have allowed them to enter the central areas, and that pilgrims would have gone up the stairs on their knees to reach the shrine. We went into the Martyrdom, the part of the cathedral where Thomas Becket was murdered, and which now has a modern shrine to him, with a sculpture of four swords. 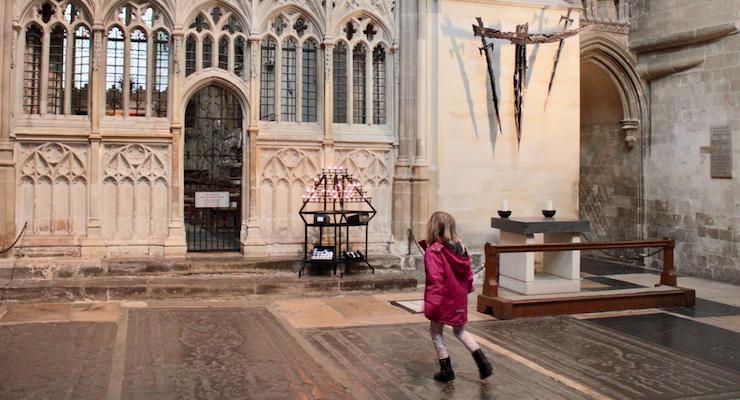 Two minutes’ walk from the cathedral is The Canterbury Tales, housed in a historic church. This quirky attraction brings to life some of the famous stories from the fourteenth century work by Geoffrey Chaucer about a medieval pilgrimage. Costumed guides lead visitors to staged scenes featuring five of the tales – some of which are quite bawdy! The experience really seemed to appeal to the children who were there, although my daughter wasn’t so keen.

From Canterbury we drove to All Saints Church, in Boughton Aluph, 11 miles away. This countryside church is unusual in that it has a chimney – apparently medieval pilgrims would take shelter by the fireplace in the porch. The church is near to King’s Wood, where there were said to be robbers who would steal from pilgrims who were on their way to Canterbury – maybe travellers waited by the fireplace until there were enough of them to brave the woods and protect each other.

We drove on 16 miles to The Dirty Habit pub in Hollingbourne, near Maidstone. The pub is right next to the Pilgrims’ Way so we parked up and went for a walk along it. The route here follows a narrow country road through fields. We saw very few cars and it was a peaceful and enjoyable walk in the spring sunshine. 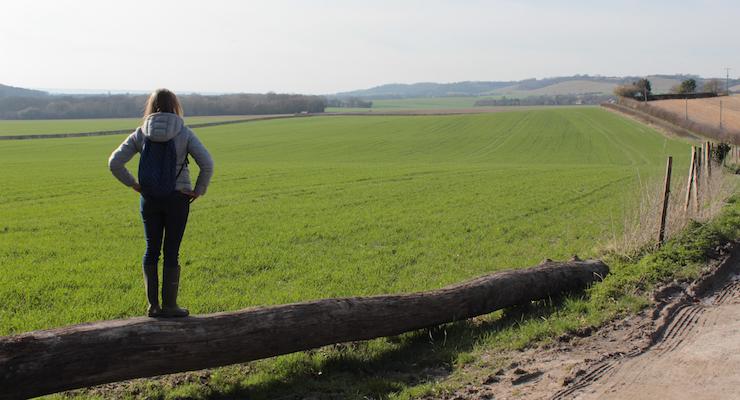 The pub was formerly known as The Pilgrim’s Rest and dates back to the thirteenth century, possibly further. It’s a charming, traditional place which has been carefully restored. After our walk we had a tasty dinner there. They have a separate vegan menu on request, and my daughter enjoyed her vegan gnocchi. 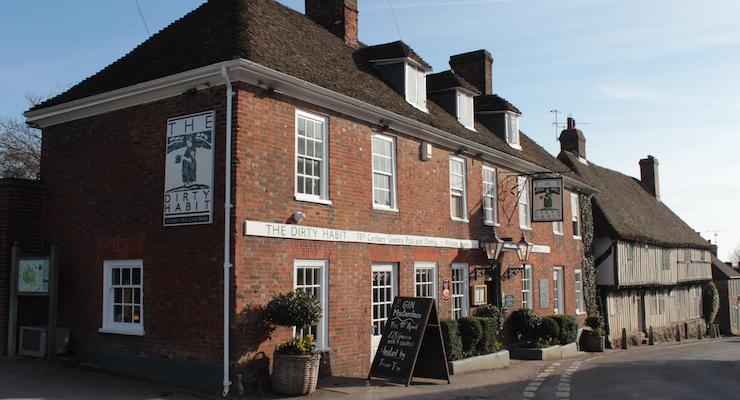 Our car for the journey was a Hyundai i30 Premium SE hatchback. The car has a 6-speed manual transmission, a 1.4 engine, a top speed of 130 mph (although obviously I didn’t go that fast!), and has good acceleration. With rear cameras for parking, a blind spot detection system and a lane keeping assist system, it feels like a very helpful car. The ignition is a button next to the steering wheel, and to start the car the key fob just needs to be somewhere nearby – I kept it in my pocket. 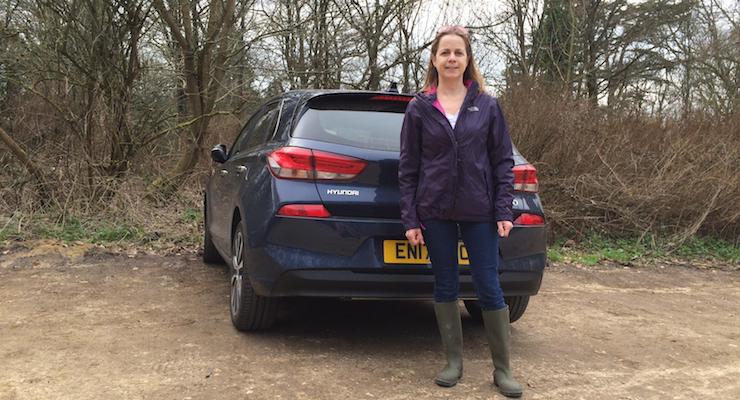 I found the handbrake a little tricky for hill starts at first, but once I got used to it I liked it. To apply the handbrake you hook up a small rectangular flap with your finger, and to release it you push the flap down. The driver’s seat is very adjustable, the car has air con and heated front seats. There’s plenty of room in the boot. The car has a marvellously huge panoramic sunroof which is basically the whole roof of the car. 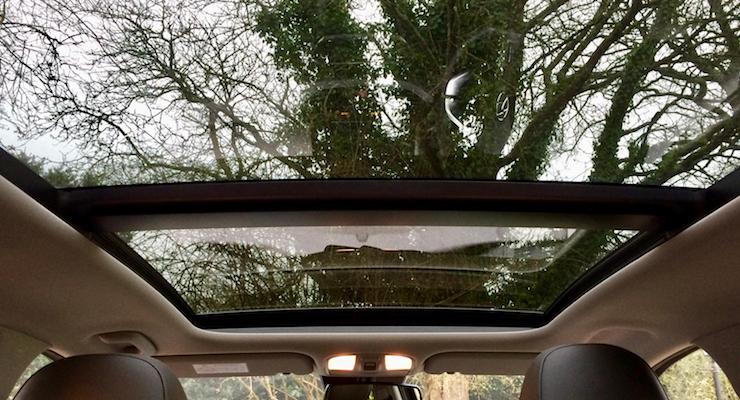 My 15 year-old son was delighted to see that the car has an aux socket, a USB socket and bluetooth, making it very easy for him to play music from his phone through the sound system whenever he needed a lift anywhere. There’s also a magical-looking wireless phone charging pad, but it only works with compatible phones (so not with my iPhone 5S).

Overall I found the Hyundai i30 to be a very comfortable, nippy and enjoyable car to drive – and I really enjoyed exploring the Pilgrims’ Way.

Have you been to the Pilgrims’ Way, or would you like to? If you have any questions about our trip, or about the car, do let me know! Here’s a map showing where we went on our journey.

This post is part of a series about exploring ancient routes by car. Check out the other posts in the series and follow the hashtag #HyundaiAdventures for more great road trip routes.

My Travel Monkey writes about A Four Day Trip Exploring Dorset and the Jurassic Coast.

Globalmouse Travels writes about her adventures in Wiltshire in Exploring the Great Stones Way by car.

Disclosure: Hyundai lent me an i30 hatchback for this trip and compensated me for writing this post. We received free entry to Winchester Cathedral, Canterbury Cathedral, and The Canterbury Tales for the purposes of this article. All words, images and opinions are my own, as ever.