Home / Life in General / The one with the dog attack 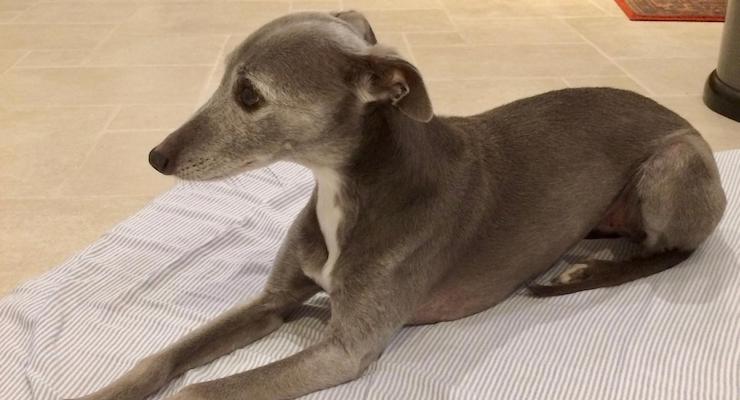 Our dog a few days before she was attacked. Copyright Gretta Schifano

If you own a dog, please read this.

So this weekend is apparently one of the sunniest on record. I’d love to be out enjoying the fine weather, but I can’t. I’m inside with the doors closed, sitting on the floor next to my gentle, beautiful dog. She’s lying on her side, eyes half shut, breathing slowly. She has a plastic cone around her head to keep her from touching the wound on her side. Because of the size of the wound, the vet has inserted a drain (a plastic tube to remove liquid) into it. Occasionally some red watery liquid drips from the tube.

The wound is from a spaniel which attacked her two days ago while we were walking in the woods near our home. My husband and I had taken our dog for a walk to see the bluebells, which are always beautiful here at this time of year. As we saw a woman and a teenager coming towards us with a black and white spaniel, I clipped the lead to our dog’s collar, as I always do when there are other dogs around. As the spaniel rushed towards us the woman called to it – and it completely ignored her. The spaniel went straight for our dog, barking aggressively. The two dogs rushed around my legs, my dog yelping in fear, trying in vain to escape. I was wearing wellie boots and tried to use my foot to protect our dog, while my husband found a stick to try to do the same.

After what felt like an eternity the woman finally managed to extract her dog, and our dog stood motionless and silent at my side. As I listened in shock, the woman explained to me that her dog was nervous because it had been attacked by other dogs, and although it was aggressive it never actually bit or hurt other dogs. I couldn’t believe what she was saying, after what had just happened. I told her that she had to have her dog on a lead, that she couldn’t walk a dog like that off the lead. She didn’t seem to want to hear what I was telling her. She asked if my dog was OK. I replied ‘Not really’, and then she walked away through the woods with her dog and her teenage companion.

At this point I bent down to my dog, and realised that she was wounded and bleeding from her side. We tried to find the woman to tell her, but we hadn’t seen which direction she’d gone in and we couldn’t find her.

We walked home and called our vet. As it was 3pm on a Saturday, the vet was closed, but a message directed us to an out of hours emergency vet in a nearby town. I called them and they said that our dog definitely needed checking out as there was a risk of shock and also the wound would need to be assessed and cleaned.

I realised that I had to find the spaniel’s owner and tell her what her dog had done, so that she would accept that it was too dangerous to let off the lead. While I sat in the back of our car with our dog as my husband drove us to the vet, I posted on Facebook explaining what had happened and asking local friends to share my post to help me to find the other dog owner.

When the vet examined our dog she said that the wound had penetrated so far that our dog would need to stay there so that they could investigate and repair it under general anaesthetic. The surgery was carried out overnight. When we picked our dog up the next morning, the nurse told us that the wound went a long way under the skin and so required a drain. She instructed us to keep a very, very close eye on our dog and her wound, to keep her inside and not to let her step up or down because that would risk opening the wound. We left the vet with a very scared, very dejected dog, a bag full of antibiotics and painkillers and instructions to phone them straight away if her condition deteriorated. The vet bill was £1305 – and there will be more to follow as she recovers. 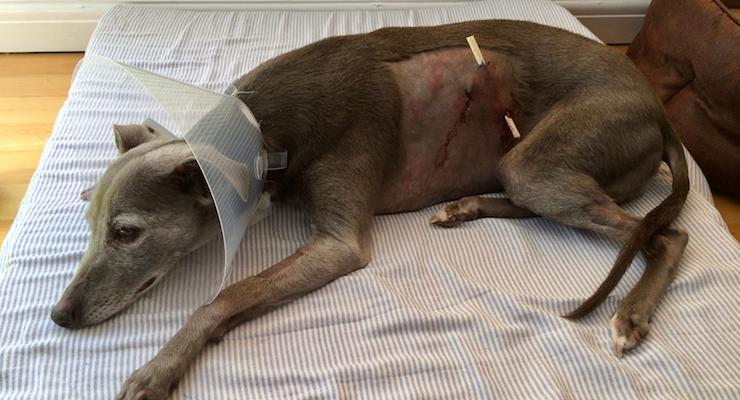 Our dog the day after she was attacked. Copyright Gretta Schifano

Since she came home we’ve been taking it in turns to be with our dog. My husband stayed with her while I went to my parents’ yesterday afternoon. Last night I slept downstairs on a mattress next to our dog, as she was very distressed when we all went upstairs to bed. I’ve cancelled a meeting tomorrow as I will have to take her to the vet for a check-up, and I’ve had to draft in a kind neighbour to drive us there, as I need to hold my dog in the car to protect her wound.

To the spaniel owner’s credit, she contacted me when she saw my Facebook post. She says that she will keep her dog on a lead from now on and that she will reimburse us for the vet bills. So hopefully her dog will not injure any other animals. But if she’d had her dog on a lead to start with, my dog wouldn’t have been injured, she wouldn’t be having to pay out for vet bills and my family would be enjoying a sunny weekend.

So, if you’re a dog owner, please do the right thing and keep it on a lead when you’re around other animals. For everyone’s sake.

Controlling your dog: the law

You can see what the law says about controlling your dog in public, and what the penalties are if your dog is dangerously out of control here.