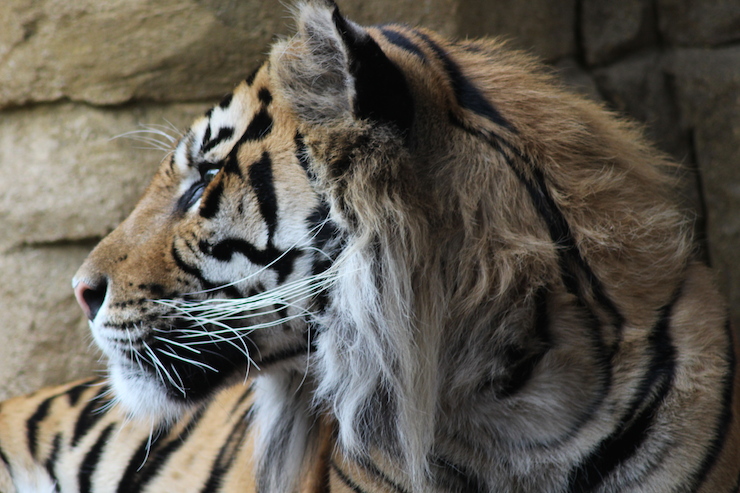 I pity the tiger. We watch him pacing backwards and forwards along the wall with his gaze fixed on whatever’s in the enclosure behind. He looks beautiful, powerful and frustrated.

My son says: ’Mum, look at the baby tigers’. He points to a grey screen showing three tiger cubs and their mother lying on some straw in an enclosed den. In small letters at the top left-hand corner of the screen is the word CUBCAM.

These are Sumatran tigers, a critically endangered species. There are thought to be fewer than 400 of them living in the wild so the birth of these triplets is fantastic. I wish that they could live in the jungles of Sumatra where they belong but in their natural habitat they’re being driven to extinction by poaching and deforestation. So they’re here instead, looked after, penned in and being watched over by CUBCAM.

We’re staying in an apartment in London for the weekend and have come to London Zoo for the morning. The zoo is in Regent’s Park in the North of the city and we travel there by bus from Hyde Park. We start off at Penguin Beach Live, a daily penguin show where the only performers are the keepers and some audience volunteers. We sit on concrete tiered steps and watch the Humboldt, Macaroni and Rockhopper penguins zipping around their lovely blue pool, the largest penguin pool in England. The pool has a transparent side so that we can see the penguins swimming underwater. One of the keepers asks for a couple of volunteers and two girls are chosen to join him in front of the penguin pool. They are to play the part of penguins and put on various penguin body parts while the keeper tells us all about penguins. 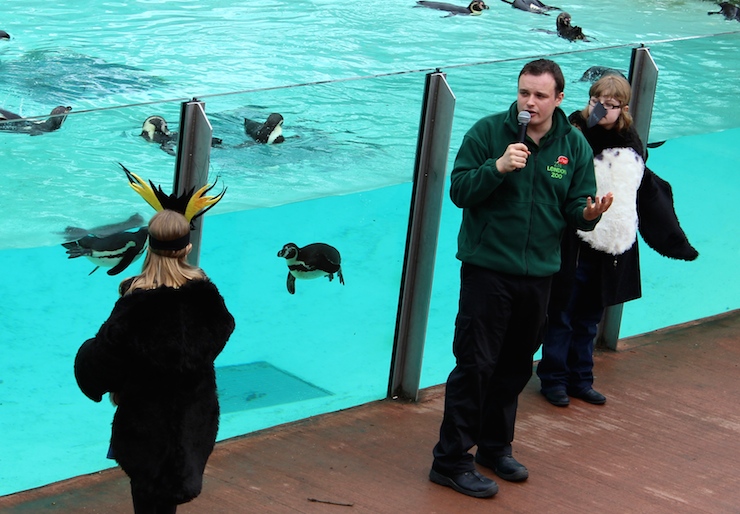 We all enjoy the show and I like the fact that the real penguins are just being themselves and are not made to do anything. After the show we go to the penguin nursery and see some very cute and fluffy chicks including one which is just two days old and is in an incubator.

London Zoo is run by the Zoological Society of London (ZSL) charity and opened in 1828. ZSL works for the worldwide conservation of animals and their habitats and also has a zoo at Whipsnade, just north of London. London Zoo is home to more than 16,000 animals from gorillas, meerkats and giraffes to ants, butterflies and komodo dragons. Some of the buildings at the zoo are Grade I or Grade II listed such as the wonderful Giraffe House which has been occupied by giraffes since 1837 and whose doors are five metres high.

There are various places to eat at the zoo and we choose to have lunch at the Terrace Restaurant. There’s a wide choice of dishes on offer from salads and sandwiches to fish and chips and pizza and it all looks tasty and colourful. I opt for a veggie burger and can’t finish it as it’s dry and tasteless but the rest of the family are happy with their fish and chips and wraps. I think if we went again I’d take a picnic.

I wish that animals could all live in their natural habitats and didn’t need the protection of conservation charities like ZSL, but we all enjoyed our trip to the zoo and loved seeing and learning about the animals. Here’s one of my favourites. 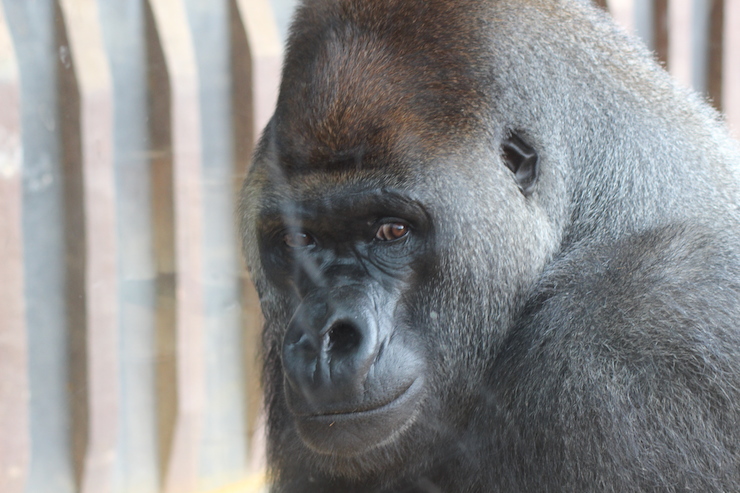 Family travel lowdown: Tickets for London Zoo booked online cost from £24 per adult, £17.50 per child and £74.70 per family of four. Children under the age of three are free. For our trip we used 2FOR1 vouchers which I’d downloaded from the Days Out Guide website so that we didn’t pay for the children. These excellent vouchers offer two-for-one entry to loads of London attractions if you travel there by train. Simply show the printed voucher and your valid train ticket before you pay.