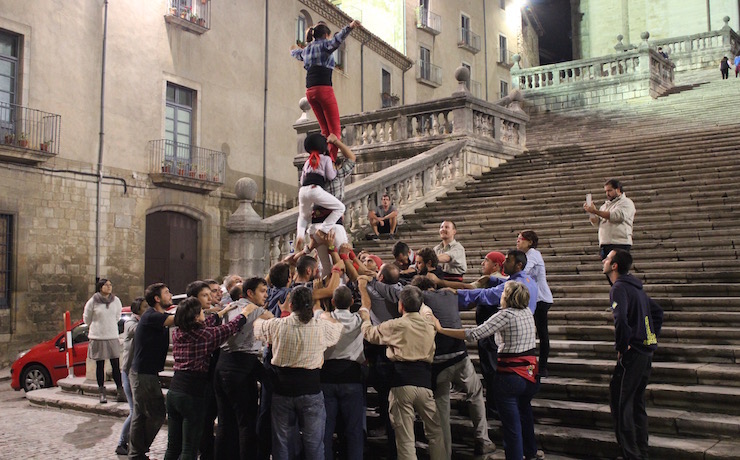 I watch the small girl as she climbs up the man’s back – and  I marvel at her agility. She looks to be about five or six years old. The man stands still, leaning in to the rest of the group as she climbs. The child moves quickly, her knees splayed sideways, frog-like. Everyone in the square is silent. She walks from his shoulders across the shoulders of the thirty or so other burly men who are clustered together in formation. At the centre of the group an adolescent girl stands on the shoulders of a man. On her shoulders stands a slightly smaller girl. I know what’s going to happen next, and I can hardly bear to watch. I hold my breath.

We’re standing in the square below Girona Cathedral on a mild October evening. I’m visiting the Costa Brava in Northern Spain for a few days with my husband and kids (17 and 12 years old) and we’re at a rehearsal of the Marrecs de Salt, a local group of Castellers. Castellers means ’castle makers’ and is a tradition which dates back to the eighteenth century in Catalonia. Teams work together to build the tallest and most complex human towers possible – the highest ever achieved had 10 levels. I first saw a castell when I was working as an English teacher in the region years ago, and it is my most vivid memory of that time. I’m thrilled that my kids now have the chance to see these marvellous human towers too.

Our visit coincides with the festivities for Girona’s patron saint, Saint Narcis, and the Marrecs de Salt are rehearsing for a performance in front of thousands of people which is scheduled for the weekend. Locals Anna Barceló and Gemma Suñer from the Costa Brava  Tourist Board have brought us along to the rehearsal.

The castellers have positioned themselves at the bottom of the steps which lead from the square to the city’s Baroque cathedral. We walked up and down these steps earlier in the day and my son counted them: there are 92 in total. As we watch, the child climbs nimbly from the shoulders of the men at the base of the castell and up the backs of the two older girls who are standing above them. She’s wearing a crash helmet, she has bare feet and she looks tiny. She reaches the top and stands high above the square, one hand on her hip, the other raised straight up in the air. I breathe. 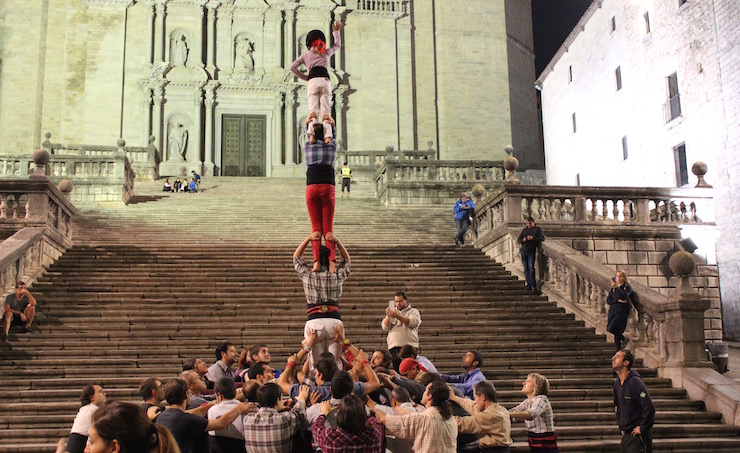 A man calls out some instructions to the castellers in Catalan and they start to move, still in formation, with the column of three girls swaying above them. My daughter whispers; ‘This is insane’. I hold my breath again, and feel slightly sick, as they walk up the steps towards the cathedral. 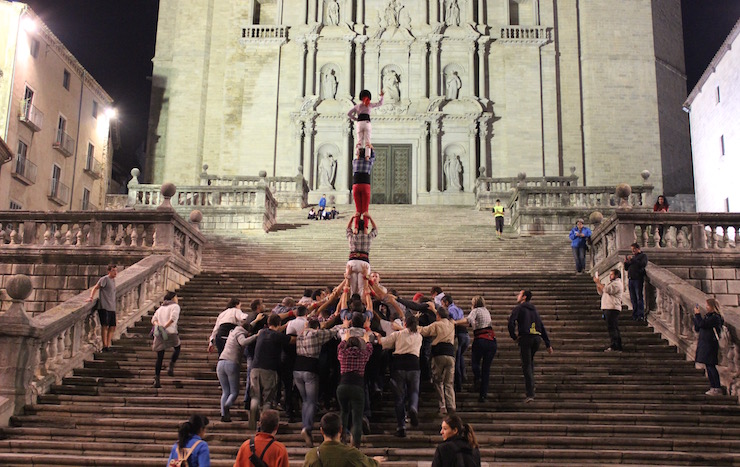 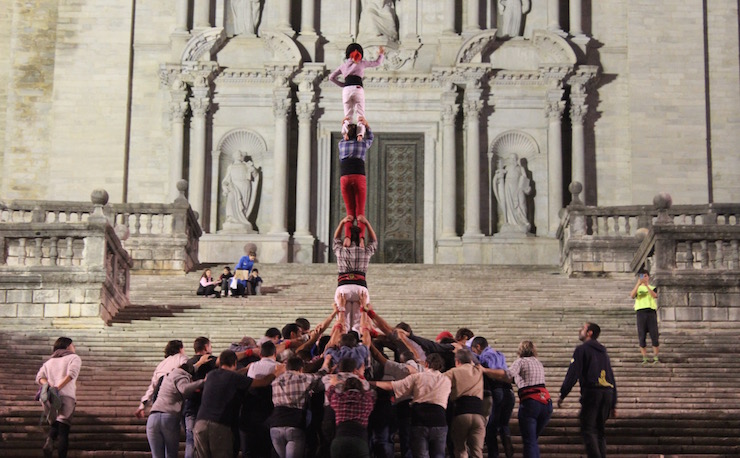 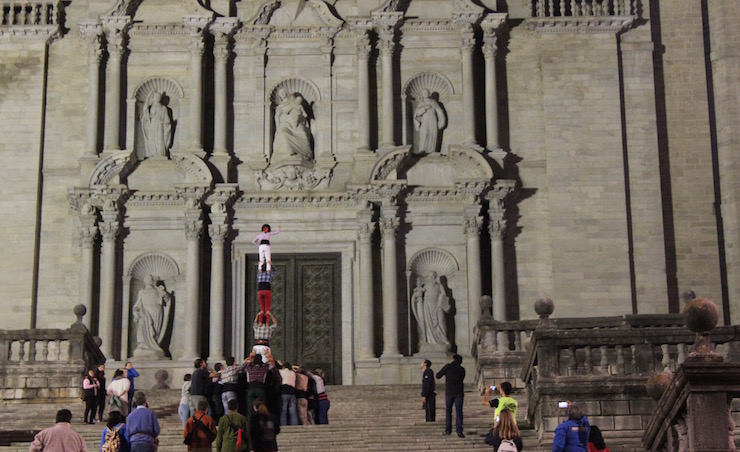 They stop two thirds of the way up the steps, the girls climb down carefully and we spectators – there are only a couple of dozen of us – clap. My husband says: ‘How can parents bear to let their children do that?’ Anna says: ‘The parents will be involved too. People who do this live it.’ The smallest girl looks happy and relaxed: she’s carried down the steps on the shoulders of one of the men.

Anna introduces me to Sebastià Morató, president of the Marrecs de Salt, and he says how pleased he is that more women and girls are getting involved in the group. He says: ‘It’s good that we have more women and girls taking part as we can build bigger castles because they’re lighter’.

The castellers are wearing ordinary clothes but many of them have a wide black sash wrapped tightly around the midriff. This is to support their backs and also to help the climbers to gain a foothold. When they perform for real the castellers all wear white trousers, a black sash and a brightly coloured shirt, and it looks very theatrical. Each group has its own shirt colour and Sebastià says that their colour is blue.

We spend the next hour watching the group as they practice building their towers. We see them walking up the steps in formation several more times, the column of girls swaying above the crowd of men.

The group’s band accompanies them on their folk instruments at various points, and I learn that the music is an integral part of the construction of a castell, signalling various stages to the participants and the spectators. I film them walking to the top of the steps in formation, accompanied by their band:

It’s an amazing spectacle to witness the creation of a traditional castell. If you’re ever in Catalonia it’s worth checking to see if there are any castell performances which coincide with your visit – these often happen in public squares on feast days and there is no charge to watch them. You just need to get there early to find a good spot to watch from.

Disclosure: We visited the Costa Brava as guests of the Costa Brava Tourist Board. Thank you to Anna Barceló and Gemma Suñer for arranging our visit to the rehearsal, and also to the marvellous and brave Marrecs de Salt themselves for allowing us to film and photograph them.