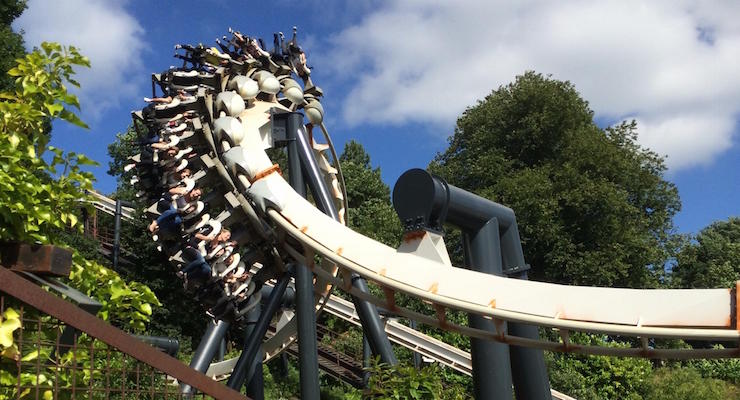 Before having children I’d never, ever been to a theme park. Then, when our kids were very young, my husband started working in Paris for a few days every week. When the kids and I went with him one time, it seemed rude not to visit Disneyland Paris while we were there, especially as the kids’ favourite films at that point were Dumbo and Toy Story. We spent a truly marvellous family day at the park, and my husband and I realised that maybe theme parks weren’t as dire as we’d expected them to be. Since then we’ve had various theme park trips on our travels, including a sunny summer day at Alton Towers in Staffordshire, England.

My husband, son (13 at the time) and I were invited to visit the Alton Towers theme park while we  were staying at the Hilton at the FA St. George’s Park National Football Centre (click the link to read my review). Alton Towers is just a 30-minute drive away from the hotel.

Alton Towers theme park is part of Merlin Entertainments’ Alton Towers Resort. There’s also a water park and accommodation at the 800-acre site, which is the former seat of the Earl of Shrewsbury. There’s an enormous ruined gothic mansion at the centre of the park which, sadly, is closed to visitors. 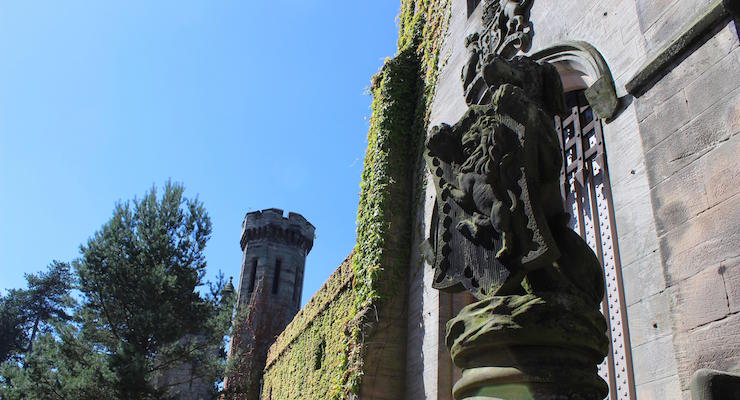 Alton Towers has some world-class rollercoasters, including the Smiler ride which has now reopened after an accident in 2015. We didn’t go on Smiler, as we didn’t want to queue for 50 minutes. We’d been given Fastrack Bronze tickets, which include one ride on each of Rita, Thirte3n, Nemesis and Oblivion rollercoasters, so we headed to try out those, stopping off at other rides along the way. 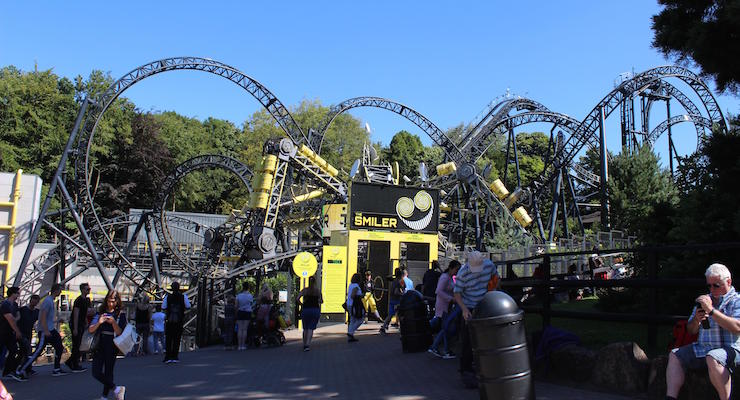 The first of our Fastrack rides was Oblivion, a vertical drop rollercoaster – basically it dives terrifyingly fast from a great height to down under the ground – which only my husband was brave enough to go on. Next was Rita, a rollercoaster which zips you from 0-60mph in 2.5 seconds, and which all three of us went on together. As I sat next to my son, waiting for the ride to start, he said: ‘Mum, don’t scream.’ He needn’t have worried – I was too terrified to scream. I kept my eyes closed for the whole ride, trying to pretend that I was somewhere else. Thirte3n was much more fun, as it was a bit less speedy – I think that I even enjoyed it. The ride has a haunted theme, which I barely noticed, but at one point I was surprised when the whole train and track dropped a few metres, freefall, in darkness, and then whizzed off backwards. I waited on the ground while the other two went on twisty-turny Nemesis, my fear on Rita fresh in my mind. They both said that the ride was ‘very good’.

Galactica is a flying virtual reality roller coaster, and it opened in 2016. My husband went on it while my son and I waited for him and watched the riders whizz past. After the ride my husband said: ‘It was very good. It was different because you have goggles on and it feels like you’re going through space and different galaxies.’

Apart from the rollercoasters we tried various other, less scary things. My son and I enjoyed the high swings of the Twirling Toadstool. The Sky Ride cable car across the park gave us great views of the gardens and grounds below. In Duel, a haunted house ride, we used laser guns to shoot at targets as we rattled along. This was lots of fun and we were quite competitive about our scores. My husband finished with the most points, but only because our son kept holding my gun down to stop me from beating him. The Blade rocking ship was entertaining, and I think that we would have enjoyed the Runaway Train ride, but the queue was too long for us. Marauders Mayhem is a ride where you sit in ‘barrel’ carriages which you can rotate as fast or as slowly as you choose. Obviously our son made our barrel go round horrifically fast – I was very dizzy after that. 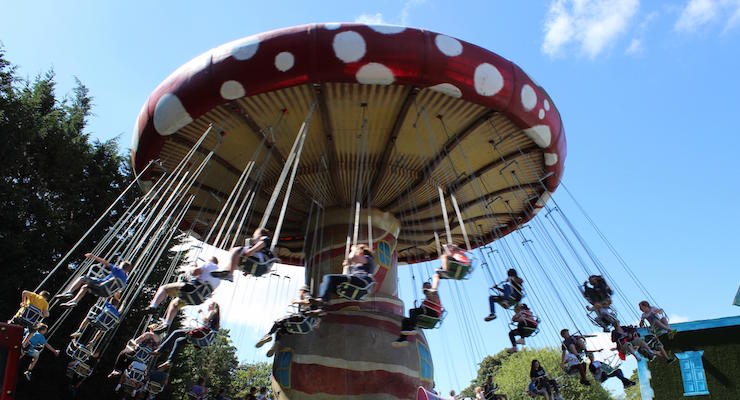 Congo River Rapids is the only water ride that we went on, and it was great fun. Before we went on the ride, I was feeling cold, and I didn’t want to get wet, so I bought a waterproof poncho at the shop next to the ride. Annoyingly, it cost £6, but once we were in the queue for the ride we snaked past a vending machine offering ponchos for £2! While we were on the ride we noticed that there were some people shooting jets of water at us from squirters at the side. Inevitably we had to have a go at that ourselves after the ride – it cost £1 for 10 shots of water.

Ice Age The 4D Experience is a short film which runs several times a day. At the entrance we were all given 3D glasses to wear. The film is amusing and easy to watch, and there are various special effects, such as snow, during the screening.

If you have younger children, there’s a whole area of the park called CBeebies Land. We didn’t go there, but it features CBeebies favourites such as Postman Pat, In the Night Garden and Charlie & Lola.

It was a hot August day, and we hadn’t taken any drinks with us to the park, so we bought refillable cups for £6 each. You can fill up the cups at the food and drink outlets around the park, as many times as you want to in a day.

We stopped for lunch at The Burger Kitchen. I had a fish burger, while the boys had beef burgers and chips, which were a bit soggy. The food was OK, but it could be so much better.

At the end of the day we had dinner at Rollercoaster Restaurant, which opened in 2016. This is an amazing place – you order via a tablet at your table, and your food and drinks are delivered to you from the kitchen by rollercoaster! This is all very novel and exciting, and the menu looked fine, but our experience wasn’t great, unfortunately. It took ages (about an hour) for our food to arrive, one dish was incomplete and its replacement didn’t arrive at all, another dish went to the next table by mistake. My main course was salmon with potatoes & green beans, and the salmon tasted so horrible that I couldn’t eat it. When it eventually arrived, our son had curry, and he said that it was good. Other diners around us seemed to be getting their food without delay, and eating it, so maybe we were just unlucky. 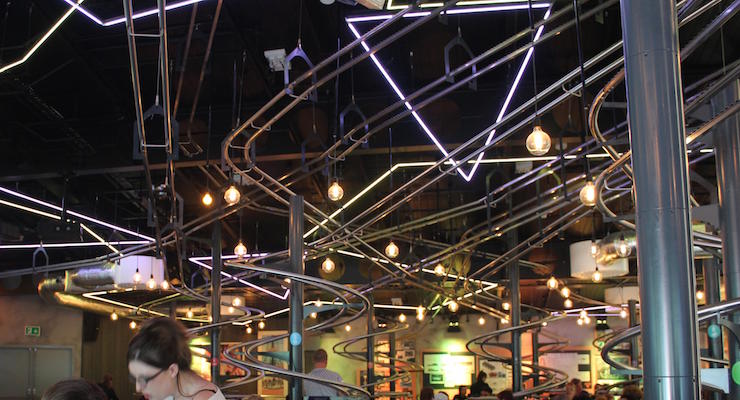 We parked on site (parking costs £6 per day). It’s quite a distance from the car park to the park entrance – so be prepared for a walk.

If you book entrance tickets online at least five days in advance, adults cost from £30.96, under-12s from £25.00. Fastrack Bronze tickets cost from £20 per person and cover a single turn on four rides only. There are various other varieties of Fastrack tickets available. The Burger Kitchen meals, including burger, chips and a drink, cost £7.25. Refillable drinks cups cost £6 each. Parking costs £6 per day. Main courses at Rollercoaster Restaurant cost from £11.95 – £29.95.

Tips for your visit

My son says: ‘Nemesis was the best ride, and I liked shooting water at the people on the water ride. My curry was good, but it took too long to come and I was really hungry’.

My husband says: ‘Nemesis, Galactica and Oblivion are the most exciting rides. The food could have been better.’

I say: If you like rollercoasters, you should definitely go to Alton Towers – but there’s lots to do there for all ages and levels of bravery too. I enjoyed Congo River Rapids the most. Alton Towers is a fun place for a day out, but it’s not a cheap option. The food which we had was disappointing. I’d like to be able to visit the ruined mansion and learn about its history.

Disclosure: Our entrance tickets, Fastrack Bronze tickets (for four rides) and dinner were provided by Alton Towers for the purposes of this review. Our trip was arranged by enjoy Staffordshire, who offer some great value short break package deals for families. 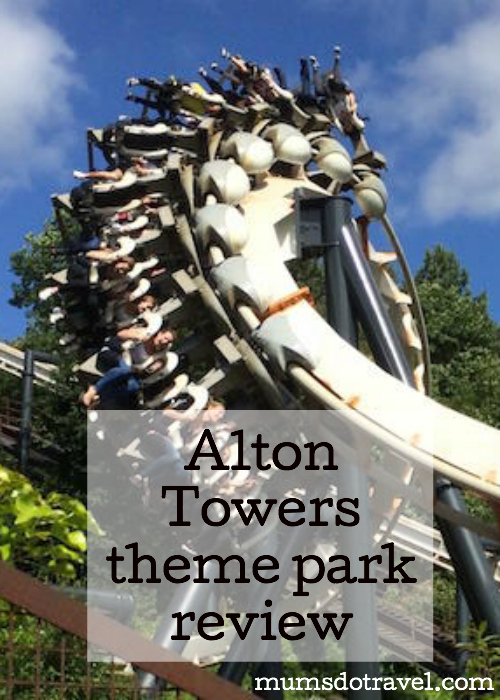