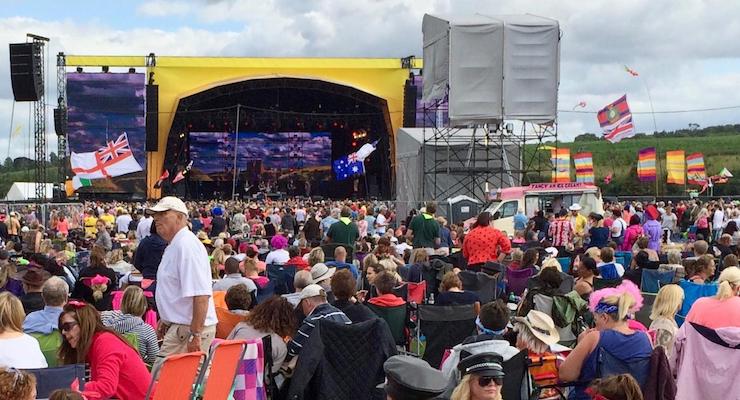 When my sister invited me to go to the Rewind Festival with her and a group of friends this year I said yes straightaway. She went to Rewind a couple of years ago and from what she’d told me about it I thought that I’d enjoy it – plus it was a chance for some sisterly bonding away from our husbands and teenagers.

Rewind is an annual weekend festival of 1980s music and it takes place at three locations at different times during the summer: Oxfordshire, Cheshire and Perth. Various artists perform at each of the locations. We went to the Oxfordshire version, in Henley-on Thames, driving there on the Friday afternoon and staying until the Monday morning.

There was an array of 1980s artists on the main stage on Saturday and Sunday, and it was brilliant seeing them perform some of the hits from my teenage years. Highlights for me were Tom Robinson, Nick Heyward, the Sugar Hill Gang, Doctor & The Medics and the Village People, but there were loads of others there too. 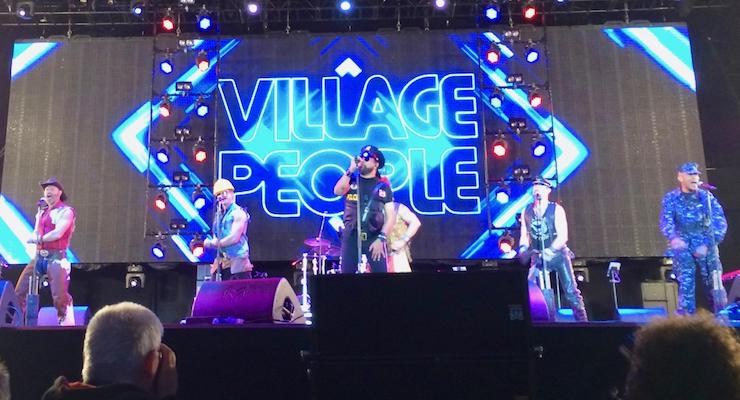 At one surreal point on the Sunday many of the performers joined together on stage to sing a tribute to George Michael. And so it was that a gaggle of artists, including former Sex Pistol Glen Matlock and Jilted John, performed George Michael’s brilliant Freedom! 90 to an appreciative audience.

I was at the front of the crowd for many of the performances and I could see that quite a few of the artists who hadn’t been on stage for a while were apprehensive. But the audience was really friendly and supportive and it was great seeing the performers relax and enjoy themselves as they sang.

Many people at the festival were wearing 1980s-style fancy dress costumes and wigs or just 1980s clothes and hairstyles, which was quite entertaining. I just wore normal, practical clothes, mainly jeans or shorts, T-shirts, a hoodie, wellies or flip-flops and a raincoat. There were plenty of stalls at the festival selling 1980s gear, in case the urge came upon you to dress up – or in case you needed some new fluorescent leg warmers. 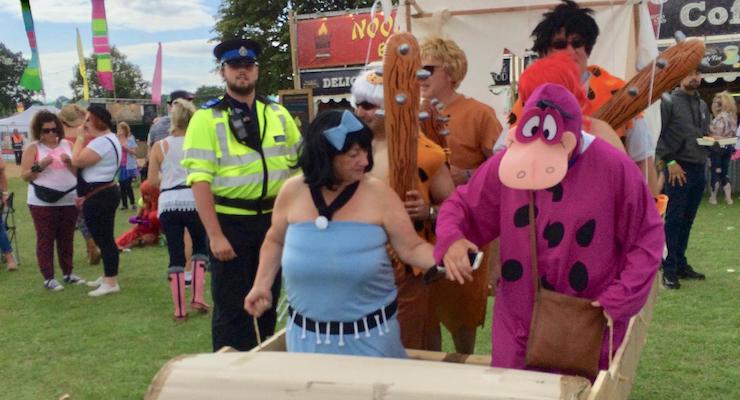 On Friday, Saturday and Sunday evenings there was a silent disco in a huge marquee which was fantastic fun – if you enjoy dancing and singing along, as I do.

The atmosphere was friendly and fun, for the most part, although at one point my sister and I thought that we were going to be caught in the middle of a fight. We were at the front of the crowd, near to the stage and three guys near to us started arguing and threatening each other, but they stopped short of actually fighting, thankfully. The people at the festival were mostly in their 30s to 50s, I reckon, although there were quite a few younger ‘80s fans there too. I saw very few children there. We talked to a couple of the young people who were working at the festival and they said that they prefer Rewind to other festivals because there’s hardly any trouble.

In addition to our festival tickets we opted to pay for glamping in order to save time and hassle. There were six of us in our group and we booked a six-person tent with three sleeping compartments and a central area. The sleeping areas were snug and the central area had plenty of space for our gear and was big enough to stand up in. The only equipment provided was a sleeping mat for each of us – but you can hire extra equipment if you want to. The glamping area had toilets, hot showers, outside sinks and a tent with hairdryers, hair straighteners and mirrors. I used the showers and they were fine, if basic. We each took a camping chair to use at the tent and when watching the performances. 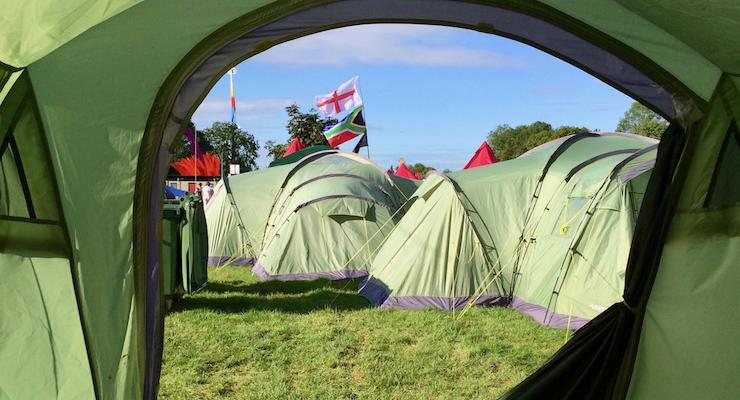 View from our tent at Rewind 2017. Copyright Gretta Schifano

There were all kinds of food stalls at the festival and the ones that I tried were very good. I took a bunch of snacks and drinks with me too. You can’t take food or drink into the arena area (I guess that the organisers want you to spend money at the stalls there), but you can take it into the camping area. We pre-ordered chilled cans of drinks to collect at the festival, which was handy. We couldn’t take those into the arena though. You can’t take any glasses or glass bottles to the festival.

We paid to use posh loos for the weekend – and I am so, so glad that we did. The posh loos had a toilet, a sink, a mirror and hot running water in each cubicle and were cleaned after each use. The other toilets around the festival smelt revolting from metres away and they must have been foul to use. The posh loos also had an area with some hair-washing sinks and mirrors. The only drawback was that they were closed from 1am until 7am.

Besides a camping chair, clothes, drinks and snacks I took a sleeping bag, a pillow, blankets, a torch, a portable charger, an umbrella and a waterproof groundsheet to sit on. It’s best to take cash as you have to pay to use the ATMs at the festival.

It took us about 20 minutes to walk from the car park to the camping area. We managed to carry all of our stuff in one go, but it was hard, slow work. We saw lots of people transporting their stuff with trolleys, which seems like an excellent idea.

The attractive historical town of Henley-on-Thames is just along the river from the festival site. I walked there and back on the Saturday morning, and it was very pleasant. It took about half an hour each way. There was also a water taxi ferrying people between the town and the festival. 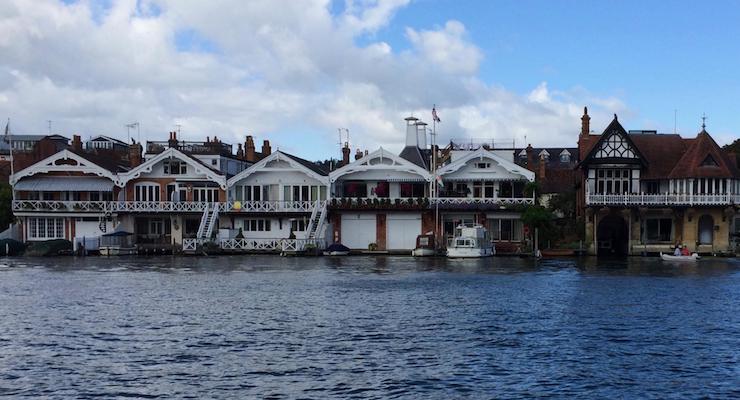 Walking along the river from Rewind to Henley-on-Thames. Copyright Gretta Schifano

I really enjoyed Rewind, and would go again. It was a lot of fun, although I was very tired and in need of a hot shower when I got home! I wouldn’t take young children to this festival as it’s not geared up for kids and there are many other festivals which do seem to be.

Have you been to the Rewind Fesival? Does it appeal to you? Do let me know if you have any questions about my trip. 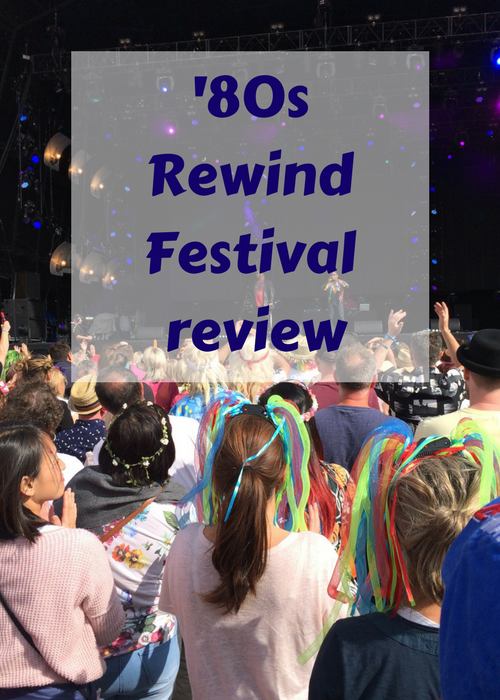