New York City is one of the most expensive cities in the world for travellers – and it’s also one of the most popular to visit, especially for teens. If you’re exploring the Big Apple with teenagers, and you’d like to keep your costs down, I have some tips for you. There are plenty of things to see and do in the city for free, and there are ways to see some of NYC’s top attractions for no charge. If you’re staying somewhere central, you can also reach many of these places on foot. Here are some of the best places to visit in New York City for free. 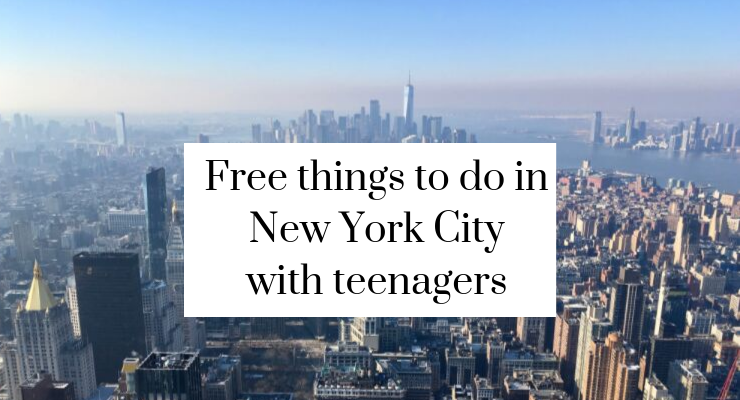 As you’d expect, Central Park is free to visit, as most parks are, wherever you travel in the world. But Central Park isn’t like any other park. Designed as a public space in the 1860’s, this prime slice of Manhattan covers 843 acres and encompasses lakes, meadows, woodland and even has its very own zoo (which you have to pay to access). The park is a great place for a wander and for people-watching, and it offers hundreds of attractions and events, from free outdoor concerts to phenomenal street performers.

Manhattan’s High Line is a public park on a 1.45 mile-long elevated stretch of former railway track. The park is a combination of wildflower gardens, seating areas, public art and design spaces. Running from Hudson Yards to the North end of Chelsea, the High Line offers excellent views of the city skyline.

There are free outdoor movie screenings at places across the city during the summer months. Popular spots include Brooklyn Bridge Park, Coney Island and Pier 63. Check each venue’s website for detailed listings – and remember to take a picnic blanket to sit on!

There’s no charge to access New York’s beaches – although if you’re staying in the city centre, you’ll need to pay to reach them by subway (unless you have a rental car). Rockaway, Brighton and Coney Island beaches are popular, while Main Beach is said to be one of America’s best. NYC Parks maintains 14 miles of beaches and has lifeguards on duty daily during the summer months.

Grand Central Station (which is actually called Grand Central Terminal) is a magnificent historic building and is definitely worth visiting – even if you’re not catching a train. Dating from 1913, the station’s marble floors and vaulted ceilings (including a vast mural of the Mediterranean night sky) hold an intriguing secret: the Whispering Gallery. When two people stand diagonally opposite each other in the arches by the Oyster Bar & Restaurant and whisper, they can hear each other’s voices clearly.

The Staten Island Ferry sails across New York Harbor, offers great views of the Statue of Liberty, and is absolutely free. The ferry’s been in service since 1905, and carries millions of people across the harbour each year. You can catch the ferry from Battery Park in Manhattan.

Since 1987, Winnie-the-Pooh and four of his best friends—Eeyore, Piglet, Kanga, and Tigger—have been living at The New York Public Library in the Stephen A. Schwarzman Building. These stuffed animal toys were the inspiration for author A.A. Milne’s famous stories, and today anyone can visit them at the library (although I really think they should be back home on Ashdown Forest – see my post How to visit the real places in the Winnie-the-Pooh books). Should you need any other reason to visit the library, it also has a copy of the original Declaration of Independence, and the building itself is magnificent.

The National September 11 Memorial & Museum is at the World Trade Center. It honours both the people who died in the 2001 and 1998 terrorist attacks, and those who tried to save others, while also remembering the survivors. The museum sits between where the twin towers once stood. The footprints of the towers are now two enormous memorial pools, where water pours down from the edges of the pools into a central void. It’s free to visit the memorial pools, and there’s free admission to the museum on Tuesdays from 5pm until 9pm: tickets are distributed on a first-come, first-served basis from around 4 p.m..

If you’ve seen the film Night at the Museum, you’re already familiar with the American Museum of Natural History. The movie includes external shots of the building, its interior scenes were based on the museum’s galleries, and it features characters inspired by real exhibits at the museum. Founded in 1869, the museum has more than 30 million artefacts, including lots of dinosaur skeletons. Entry to the American Museum of Natural History is free in its last hour of opening (from 4:45 to 5:45pm), and its admission price is ‘suggested’ at other times.

Home to more than 150,00 works, the Museum of Modern Art (MoMA) has one of the world’s leading modern art collections, including pieces by Picasso, Warhol, Van Gogh and Matisse. Entry to MoMA is free on Fridays from 4 to 8pm and entry to the sculpture garden is free each morning from 9:30 to 10 am. 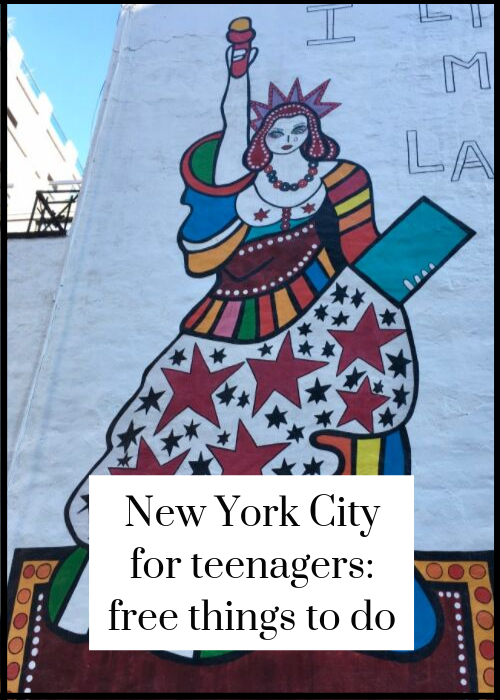 Read about my teen-free trip to New York with friends:

If you’re looking for a guide book, I recommend Lonely Planet’s Best of New York City 2019

, which I used on this trip.

What have I missed? Do you have any recommendations for fab free stuff to see and do in New York City?