Until this year, I’d never been to Tunisia. Now that I’ve been to this vibrant, fascinating country twice within the space of a few months*, I’d definitely like to explore it further. Tunisia is the northernmost point of Africa, and is known for its fantastic Mediterranean beaches. But if you look beyond the beaches you’ll find a rich and diverse culture and history. 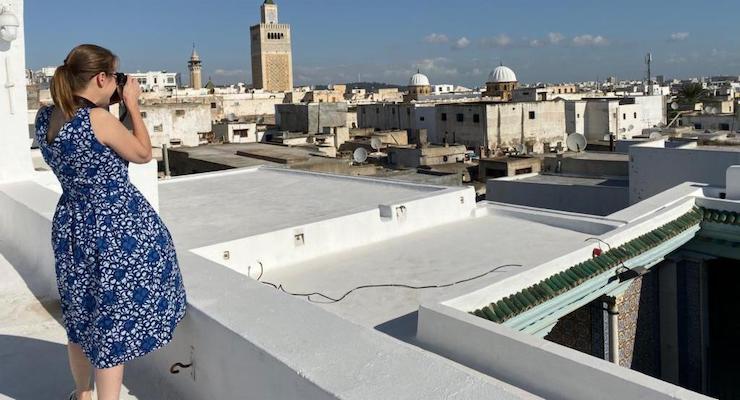 Based on my experiences, this is my itinerary for a five-night trip to the north of Tunisia, with a focus on Tunis, UNESCO World Heritage sites, and the Mediterranean coast. I’d love to do this trip with my husband or with friends. 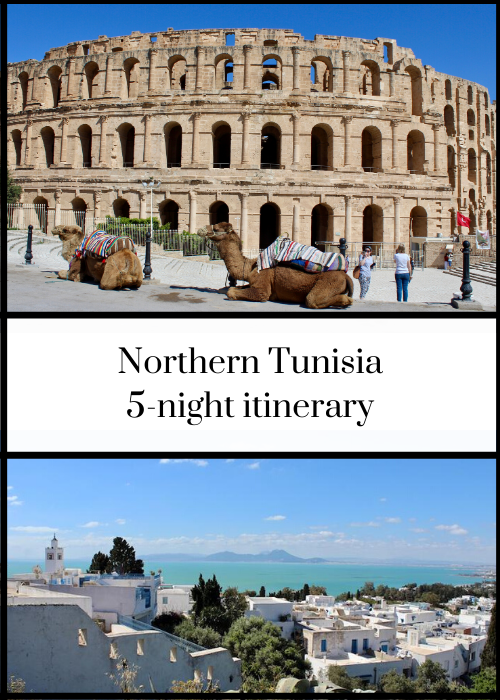 Fly from London to Tunis, the capital. Tunisair fly direct to Tunis from London Heathrow or Gatwick, on different days. Tickets include a generous checked-in luggage allowance, which is handy for all of the beautiful things that you’re going to want to buy in the souks.

When you arrive in Tunis, buy some Tunisian Dinar from one of the banks in the airport arrivals hall. TND is a closed currency, so you can’t buy any until you’re in the country.

Take a hotel car to Dar El Jeld Hotel & Spa in the medieval medina. The medina is the old part of Tunis, and is on the UNESCO Word Heritage list. Check out this post by Ting Dalton for the lowdown on Dar El Jeld: A boutique hotel in Tunis: Dar El Jeld Hotel and Spa review. If you prefer, you could stay at the grand and historic Palais Bayram (also in the medina), which Cathy Winston has reviewed here: Palais Bayram review: a boutique hotel in Tunis, Tunisia. 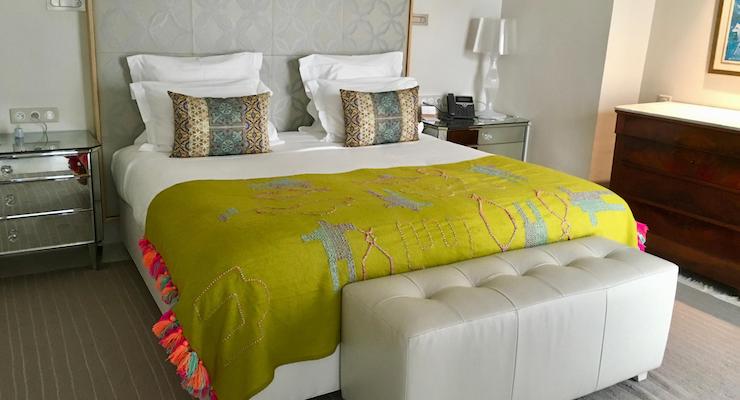 Have dinner at Dar El Jeld’s rooftop terrace restaurant, and enjoy views across the medina. Stay at Dar El Jeld for three nights.

Spend the morning at the world-famous Bardo Museum, on the outskirts of Tunis. The Bardo is home to a vast and marvellous collection of Roman mosaics. The Roman name for Tunisia was Africa, and the country was of great importance to the Roman Empire. The mosaics in the Bardo come from the ruins of villas, temples, baths and other buildings which have been discovered across the country. Besides the mosaics, the museum also encompasses a nineteenth century palace complex which belonged to the beys (monarchs) of Tunis. I found it very helpful to have a local guide at the Bardo, but there’s an audio guide available if you prefer. 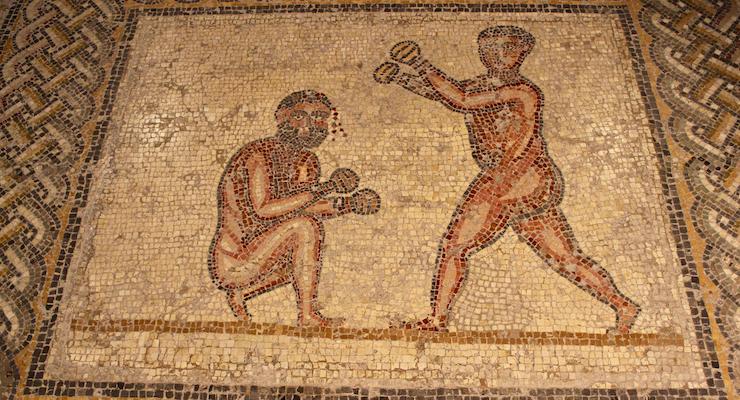 Return to the medina and have lunch at Fondouk El Attarine, a former caravanserai in the heart of the souks. Historically a caravanserai was a place where travelling merchants could rest with their caravans of animals and goods. Today Fondouk El Attarine serves traditional Tunisian food in a relaxing courtyard setting and it’s very popular, so it’s best to book.

After lunch, explore the medieval medina. The streets in the medina are narrow and winding, full of covered souks, artisans’ workshops and residential buildings with colourful painted doors. 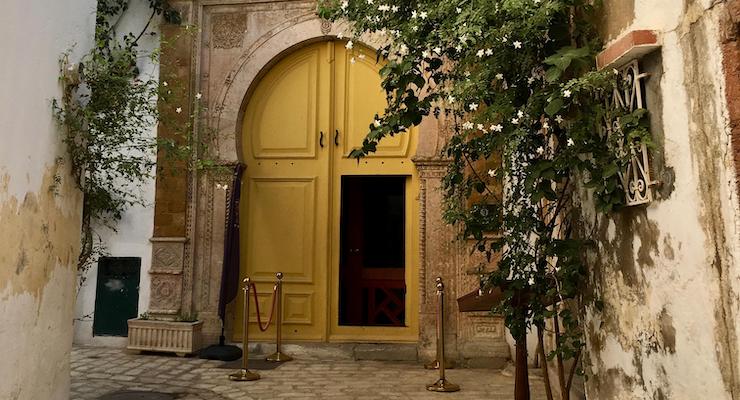 There are many beautiful handmade things to buy in the souks, at very good prices. If you want to buy anything, check out my post How to shop in the souks of Tunis medina as well as the post Shopping in Tunisia – 10 of the best souvenirs to buy in Tunisia, by Nichola West, for tips and advice. For views across the medina and beyond, go to the rooftop terrace at Groupement Artisanale at 58 Soul El Leffa – it’s free to access. 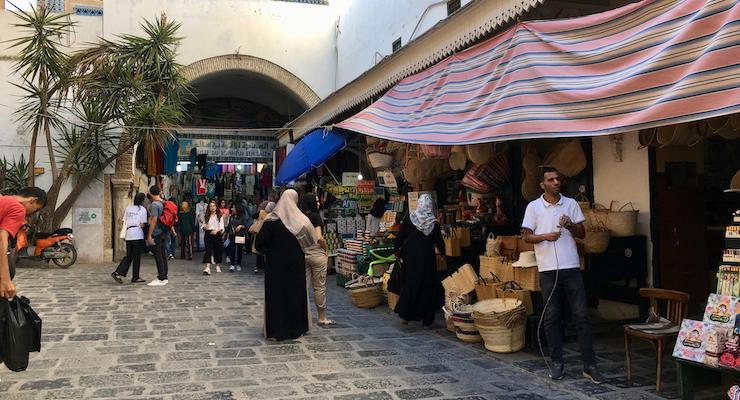 If you have time, go to the hammam at the Dar El Jeld spa for a relaxing and luxurious experience before dinner.

Have dinner at the Dar El Jeld restaurant, which is next to the hotel.

Explore the Roman site at Carthage, 10 miles from the centre of Tunis. Once one of the most powerful cities of the ancient world, Carthage is on the UNESCO World Heritage list, although only some scattered ruins remain. Highlights are the ruins of the Roman amphitheatre and the Antonine Baths. Go to the Carthage Museum to learn about the history of the place. 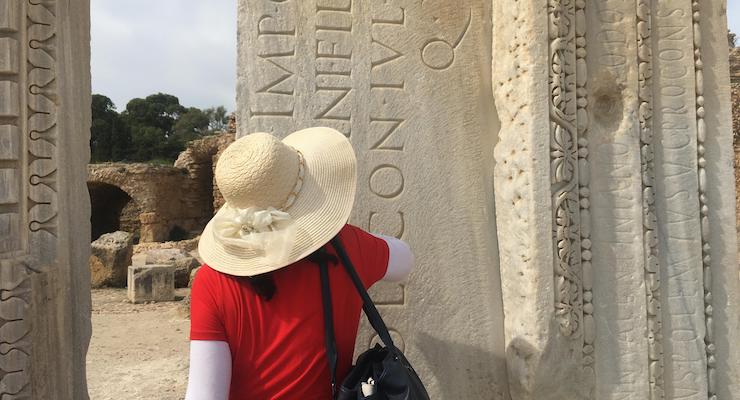 Have lunch at Villa Didon restaurant, close to the museum, and enjoy the views across the Bay of Tunis. (I haven’t eaten here myself, but my fellow bloggers Kirstie Pelling and Nichola West have, and they rate it very highly).

Go for a stroll along the cobbled streets of beautiful Sidi Bou Said, around a mile from Carthage. Perched on the cliffs above the Gulf of Tunis, the buildings in this pretty village all have whitewashed walls and blue doors and shutters, and it’s hard to go very far without stopping to take a photo.

Palais Ennejma Ezzahra, built for Baron Rodolphe d’Erlanger in the early twentieth century, is worth a visit. Take in the spectacular views from the terraces of the famous Café des Delices (although I’m not sure about eating or drinking there, as it has mixed reviews and we didn’t have time to try it when we were there).

On the way back to Tunis (around 13 miles away), stop for dinner at La Goulette, a coastal suburb of the city which is renowned for its fish restaurants. The main drag, Avenue Roosevelt, is lined with restaurants, and locals recommend Restaurant La Mer, Restaurant Poisson D’argent and Le Cafe Vert in particular. The parallel street is next to the beach, and is a popular place for a sunset drink – although alcohol is only served indoors, so the outside terraces are just for enjoying soft drinks, tea and coffee.

Check out of Dar El Jeld hotel. Travel by car to Dar Zaghouan, 35 miles away. Dar Zaghouan reminds me of an Italian agriturismo, with a farm, a restaurant, and rooms for guests. It also has workshops where visitors can see local artisans creating traditional products, and there’s an outdoor swimming pool for guests to use. 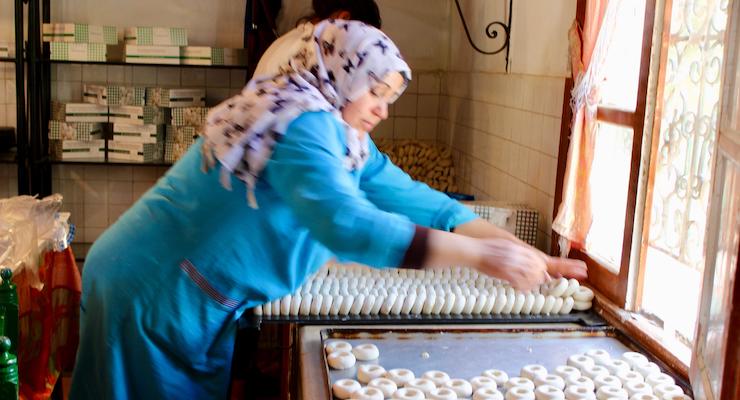 Have lunch at the traditional restaurant at Dar Zaghouan. If you’re there on a Sunday, as we were, there may be local musicians playing traditional Tunisian music around the tables while you’re eating. 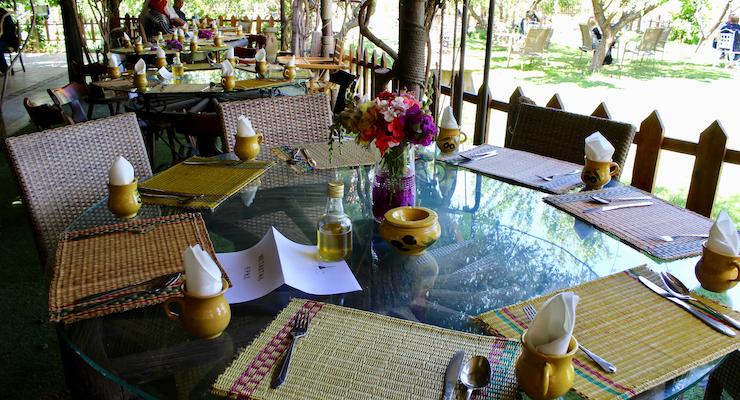 Travel to the five-star Royal Thalassa Hotel & Spa (around 74 miles from Dar Zaghouan) on the coast in Monastir to check in for two nights. Spend time at the hotel’s sandy beach, at the outdoor pool or at the luxurious thalassotherapy spa. 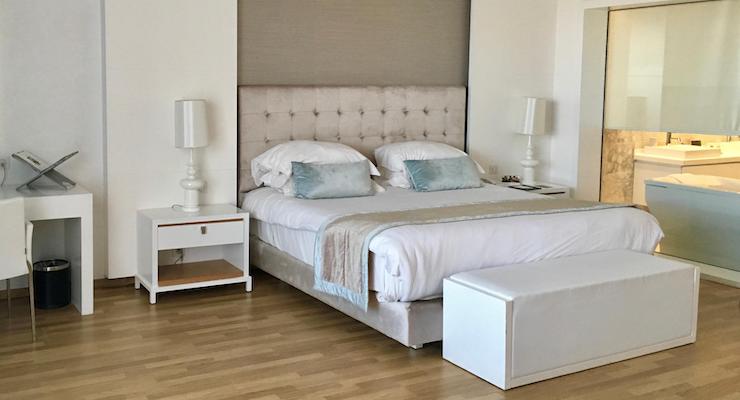 Have dinner at the Royal Thalassa Hotel’s buffet restaurant.

Travel to El Jem (around 43 miles from Monastir) to visit its astonishingly intact and well-preserved third-century amphitheatre, another UNESCO World Heritage site. El-Jem was once one of the richest towns in Roman Africa, and as you explore this vast structure it’s amazing to think of the dramas which must have taken place here in ancient times. We didn’t have a guide here, but if I returned I would try to book one, as there were no helpful signs explaining things, nor was there anybody around to ask for information. 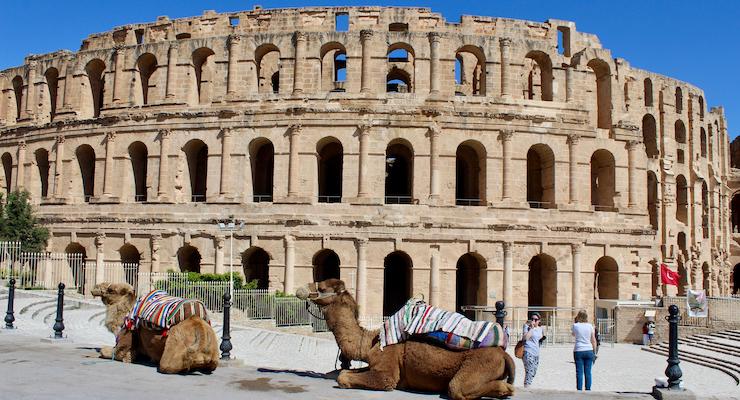 Have lunch at Restaurant Le Bonheur, which is close to the amphitheatre (I’ve not tried it myself but it’s been recommended to me by locals and has good reviews online).

Travel back to Monastir and visit the town’s famous 8th-century ribat, an enormous defensive coastal fortress. This impressive structure was the first ribat to be built in Africa. 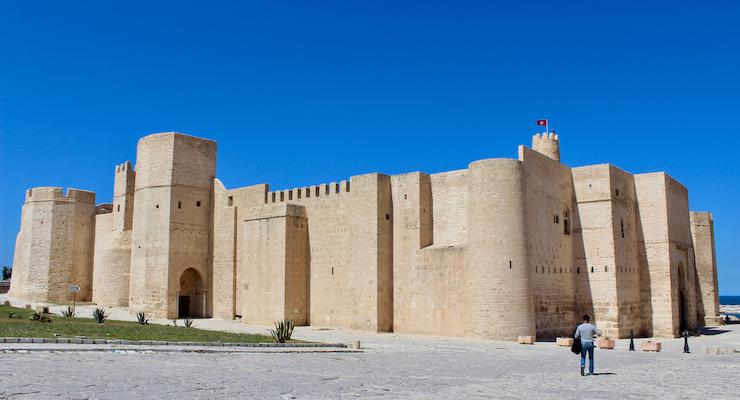 Go souvenir shopping in the souks of Monastir’s historic medina, less than half a mile away.

If you’d like a change from the hotel buffet, have dinner at Dar Chraka, a traditional local restaurant in the medina (I’ve not eaten here, but it’s been recommended to me by locals).

Drive to Tunis airport (around 100 miles from Monastir) for your flight back to London.

Getting to Tunisia and travelling around

Fly with Tunisair from London (Gatwick or Heathrow on different days) direct to Tunis.

Easyjet are flying from London Gatwick direct to Enfidha-Hammamet in Tunisia twice a week from May 2nd, 2020. For a trip like this, you could book to fly back from here, rather than travelling North to Tunis for your flight home.

Within Tunisia, you can travel around using taxis, which are very cheap, or your hotel can arrange a car for you, or you can hire a car. Bear in mind that if you’re staying in the medina in Tunis, a taxi may not be able to take you to the door of your hotel, as access in the medina is limited.

Would this kind of trip appeal to you? Is there anything that you’d like to know about my trips to Tunisia? If you’ve been to Tunisia yourself, what was your highlight, and would you like to go back there? Let me know in the comments below.

You can read more about my experiences in Tunisia in these posts:

Highlights of a 3-day trip to Tunisia

How to shop in the souks of Tunis medina, Tunisia

These excellent posts by my fellow bloggers from The Family Travel Collective are very helpful:

48 hours in Tunis – a city break in Tunisia by Cathy Winston.

Ultimate Guide to the Food of Tunisia by Ting Dalton.

A Weekend In Tunisia – Meeting The People And Places Who Make It Shine by Nichola West.

5 of the best things to drink in Tunisia by Kirstie Pelling.

Here’s a short video with highlights of our experiences in and around Tunis:

*Disclosure: I went to Tunisia as part of a paid ad campaign with the Tunisian National Tourist Office. All opinions, words and images (unless otherwise credited) are my own and are completely independent, as ever. This post contains some affiliate links – this has no effect on any purchase you make, but means that I may receive a small commission.