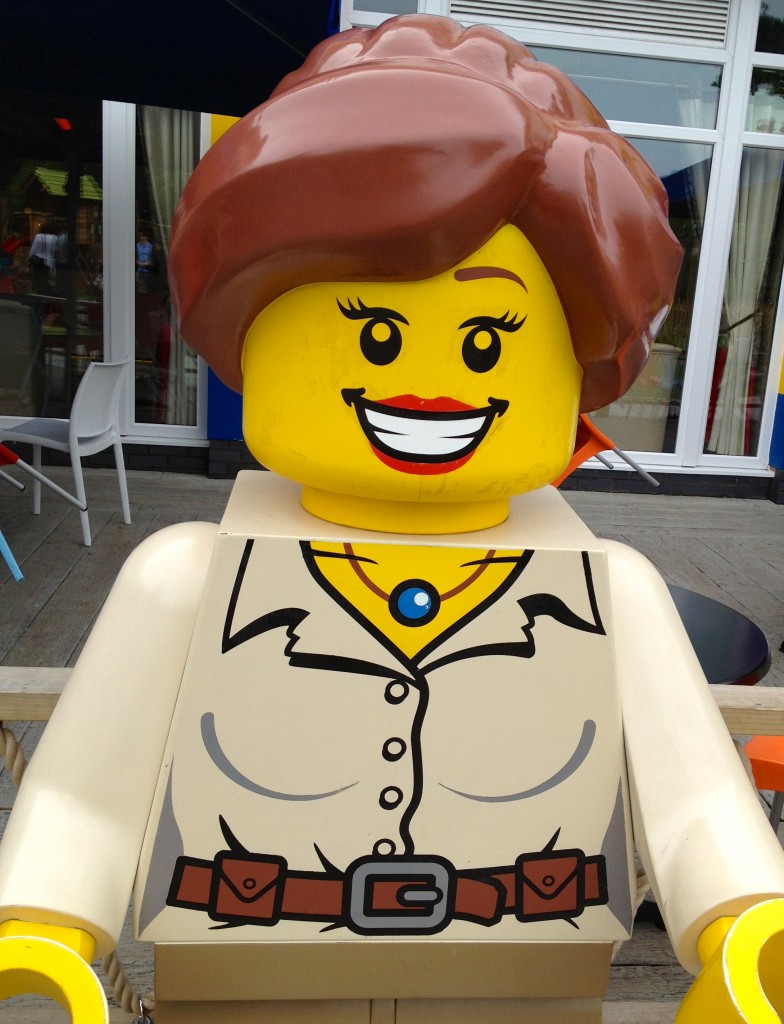 In the car on the way to LEGOLAND Windsor yesterday the youngest told us about a debate they’d had at school about the facial expressions of LEGO characters. His teacher  must have been inspired by a news story last week of a scientific study showing that LEGO faces are getting angrier. So the youngest and I decided to undertake a totally unscientific study of our own once we got to the park. The eldest raised her eyebrows in an expression which I doubt has ever been seen on a LEGO character, declining to take part. My husband kept out of the discussion. Spoilsports.

We were greeted at the cheerful, bricky LEGOLAND resort hotel by a friendly member of the MADS blog award team, who had invited us to a family day at the park with the other 2013 finalists. I was given our pass for the day, featuring some very smiley characters: 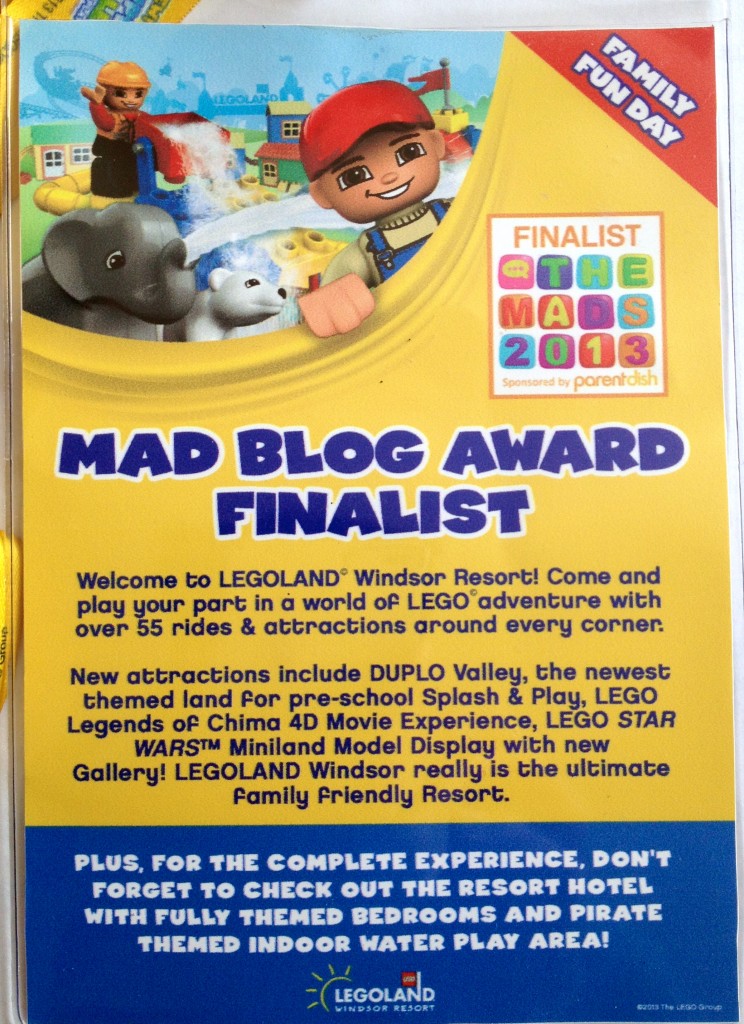 We made our way to the Imagination Theatre with the other blogger families to see Legends of Chima, a 4D film. We’d seen 3D films before, and  were trying to work out what on earth the fourth dimension could be. It turns out that the fourth dimension is amazing: rain, snow, wind, smoke and fire inside the cinema, while you’re watching the film. I had no idea this was possible, so was very impressed with it all, as was the youngest. It was very safe: the rain was a light drizzle, the snow was floaty foam and the fire was contained and away from the audience.

After a quick group photo following the film we were free to enjoy the park, armed with magical gold paper wrist bands which meant we didn’t have to queue for any rides, which was much appreciated. Having missed out on the Laser Raiders ride on our last trip because the queue was so long, we headed straight over to that ride for a shooting competition. (I’m not saying I’m pleased that I came out with the highest score, but it does prove that my previous victory at EuroDisney’s Buzz Lightyear laser ride wasn’t just a flash in the pan. Just saying).

Revelling in the queue-skipping powers of our gold wristbands we buzzed through our favourite water rides from our previous visit: Viking River Splash and Pirate Falls. We’d remembered to bring our Thorpe Park waterproof ponchos, so didn’t get too wet. Next was The Dragon, quite a tame rollercoaster compared to those at Thorpe Park, but the youngest wanted to go on it twice. It was about the right level of whizziness for me: it didn’t turn me upside down and I didn’t worry about loss of brain cells.

Boating School was fun, and my husband enjoyed seeing the stingrays and sharks on the Atlantis Submarine Voyage. The youngest loved the Jolly Rocker, a huge pirate boat which swings up and down in the air and made me feel like my stomach was somewhere behind me. The new LEGO STAR WARS miniland model display is fun, and the eldest observed that a lot of Dads seemed to be spending a long time in there taking in the scenes from the famous films, rendered in LEGO bricks, accompanied by John Williams’ Star Wars music.

So, are LEGO faces getting angrier? When we first arrived at the LEGOLAND hotel we passed a girl of around 4 years old who was crying loudly and crossly because she didn’t want to go home. During our research at LEGOLAND Windsor I think that hers was the only unhappy face we saw.

Family travel lowdown: We were guests at LEGOLAND Windsor as Mums Do Travel is a finalist in the 2013 MAD Blog awards. Tickets cost from £123.60 for a family of 4.