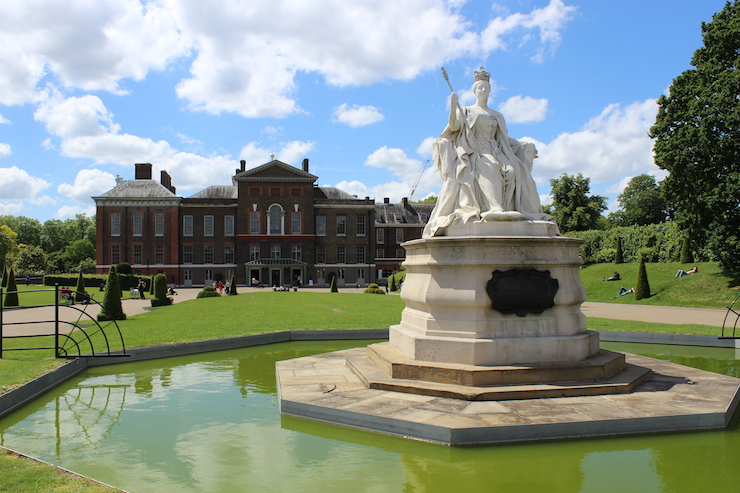 ‘In Georgian times anyone could come here and join the royal court as long as they were wearing the right clothes’ says Alison, our City Wonders tour guide. But the outfits on display barely qualify as clothes. I think they’re best described as expensive constructions: 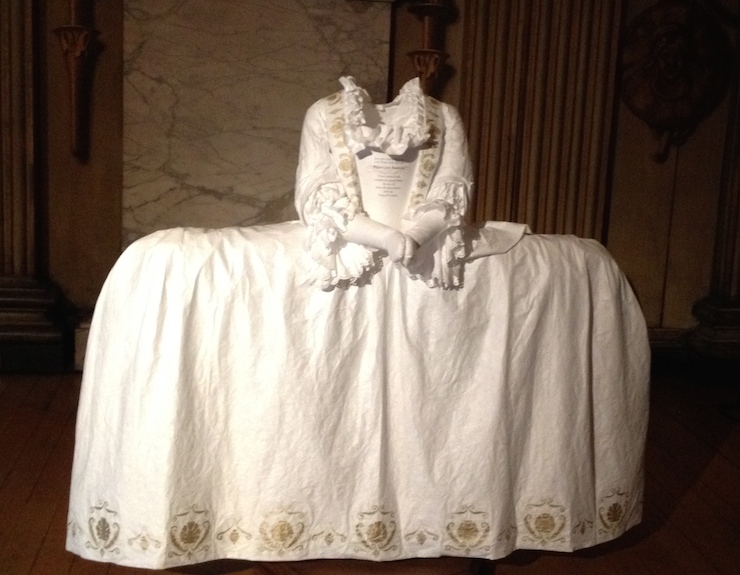 We’re at London’s Kensington Palace, purchased by King William and Queen Mary for £20,000 in 1689. Alison explains that at that time Kensington was a country village and the royal couple moved there because William was asthmatic and they needed to escape the polluted air of central London. Kensington today is one of London’s wealthiest and busiest areas and is home to some of the capital’s top museums – it’s hard to imagine it as a village.

We meet Alison by the statue of Queen Victoria at the front of the palace in beautiful Kensington Gardens. We’re in a small group with just our family of four and a couple from the USA and we’re each given headphones and an audio device so that we can hear Alison. We can actually hear what she’s saying very easily so I soon turn my device off.

Before we go inside we walk around to the golden gates at the side of the building. These gates were the backdrop to the vast carpet of flowers people left here when Diana, Princess of Wales died in 1997 – Alison pulls an A4 size photo out of her bag to show us what that vast floral tribute looked like.

I like going around the palace with Alison because she tells us things which you wouldn’t find in a guidebook and draws parallels between the past with the present which I wouldn’t necessarily have noticed. For example she talks about the symbolism of fans at the Georgian court and then how our present queen uses her handbag to signal to her servants when she’s ready to go or move on.

The palace has some grand and beautiful rooms and furnishings yet it feels current and alive: perhaps that’s because generations of royals have grown up here. This was Queen Victoria’s birthplace and childhood home and you can see the dolls house she played with as a child. The palace is still the home of royals today. Baby Prince George moved in last year with his parents William and Kate and his uncle Prince Harry also has an apartment at the palace. Alison says there’s a nightclub Prince Harry likes nearby which anyone can go to as long as the doormen like the look of them – it sounds a bit like the royal court in Georgian times.

My teenage daughter and I enjoy looking at the clothes on display. I love the rooms with a selection of gorgeous outfits worn by either by the Queen, Princess Margaret or Diana across the decades but my favourite is Queen Victoria’s wedding dress: 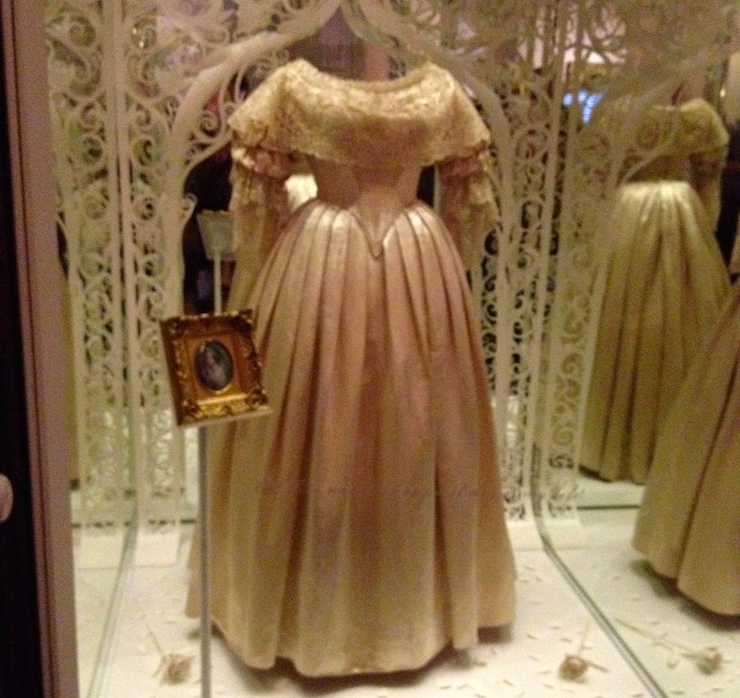 Once we’ve looked around the palace we walk through Kensington Gardens and over the road to the Baglioni Hotel for the final part of the tour: afternoon tea. The Baglioni is part of an Italian luxury hotel group and the interior is all velvet upholstered seats, ornate chandeliers and white table linen. Afternoon tea is some delicate sandwiches, tasty cakes and scones with jam, cream and, shockingly, Nutella. (I know many people like Nutella but it really shouldn’t be allowed anywhere near afternoon tea).

My husband and I enjoyed the afternoon but the youngest (11) was not so keen. Our daughter (15) liked the palace and our guide but says she’d prefer to go and look around by ourselves. I don’t think I’d go on a tour like this again with the children but I would consider it without them.

Thank you to City Wonders for arranging our tour. We experienced the Skip the Line Kensington Palace Tour & Afternoon Tea which costs from £65 per adult and £60 per child inclusive.

If you’ve ever been on a guided tour with your children how did it work out for you? Do you have any tips or advice for visiting historical places with kids?