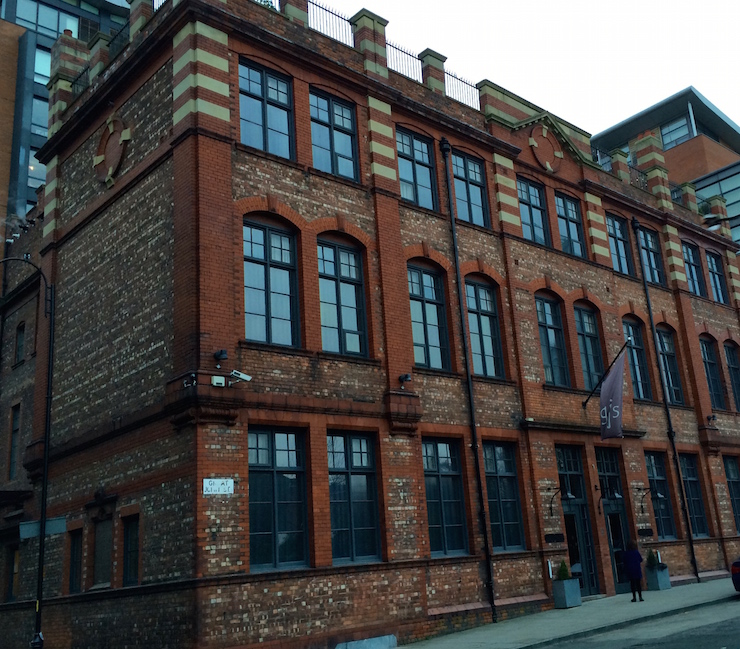 I stayed at the luxurious Great John Street Hotel in Manchester for one night last week. The hotel is part of the Eclectic Hotels group which has two other hotels in the area. I was with my sixteen year-old daughter and nephew and we were reviewing the hotel while on a tour of some of the university cities in the North of England.

We arrived one evening tired after a long drive there from Surrey via Leeds. The hotel is in the city centre but the street was quiet and empty when we arrived. I parked the car in front of the hotel in order to unload our bags and intended to then drive to the NCP car park around the corner. The helpful receptionist told me that I could leave the car outside the hotel until the next morning because it’s free to park there between 8.30pm and 8.30am.

It was dark when we arrived but I could see that the hotel is an imposing three-story brick building which looks Victorian (although the building was actually constructed in 1912). We checked in quickly and headed up to our room, number 22, one of the hotel’s Classical Grand Twin rooms. 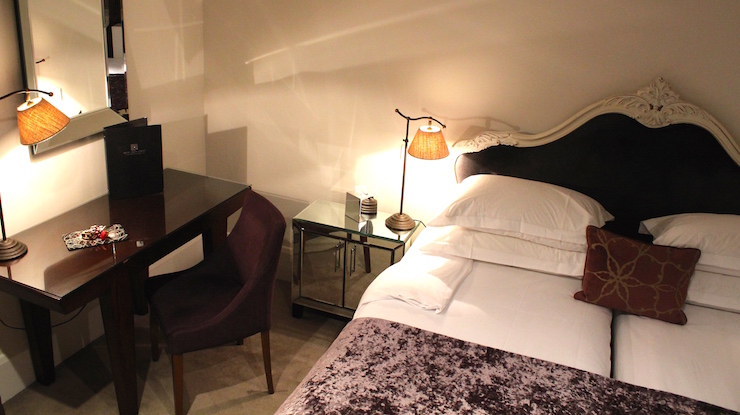 The room was perfect for us because my daughter and I slept in the twin beds and the hotel had added an extra bed for my nephew. When I asked for the extra bed the hotel said that it was really meant for under-12s – but I knew that my nephew would be fine in it, and he was.

The room was on two levels with the beds, a desk, a TV and wardrobe downstairs while upstairs were a corner sofa, another TV and a roomy bathroom. My nephew decided that he’d rather sleep upstairs and so moved his mattress and bedding up there. He was delighted to find that the TV had Sky, especially as there was a football match that evening which he wanted to see. Both teens were thrilled that the hotel had free Wifi throughout and proceeded to catch up on their social lives while I made myself a cup of coffee with the kettle upstairs. I was pleased to find a small carton of fresh milk in the fridge to use in tea and coffee. We’d already devoured the welcome cookies and cake that the hotel had left for us in the room.

I felt at home in the room straight away. The layout and furnishings were comfortable and luxurious, from the crushed velvet throw at the end of my bed to the Roberts MP3 docking station next to the TV to the roll top bath. The bathroom also had a tiled walk-in shower and there were white fluffy towels and Temple Spa toiletries for us to use. 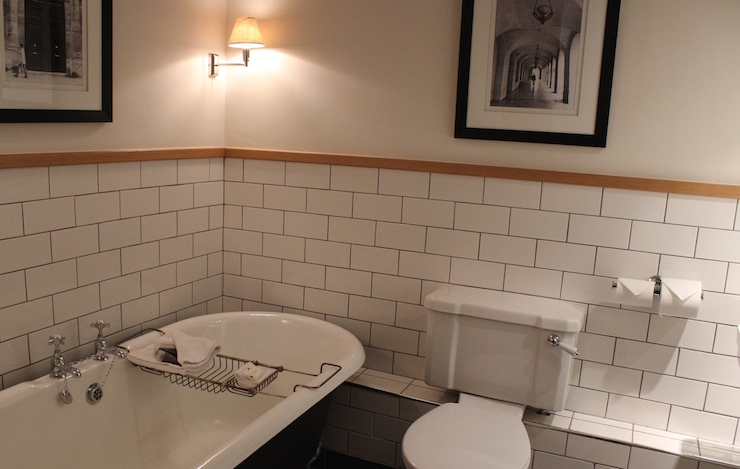 We were very hungry by this point and so I called reception for a recommendation of where to eat. I asked for a place that the kids would like and with a vegetarian option. She suggested a restaurant called Giraffe in the nearby Spinningfields area, a modern retail and business district. Giraffe was a safe and easy three minutes’ walk away and was just what we needed. We all opted for burgers and chips. My vegetarian burger was made with falafels and was very tasty. Back at the hotel we were all asleep very quickly.

I was woken by an alarm call at 7am the next day. I left the kids sleeping while I went to move the car to the car park. As I walked back to the hotel I was amazed to see that it’s right opposite Granada TV’s famous Coronation Street set where the soap was filmed for many years and where you can pay to go on a studio tour. I hadn’t noticed this in the dark the previous evening. I went to wake the kids up, grabbed my camera and headed up to the hotel roof terrace. 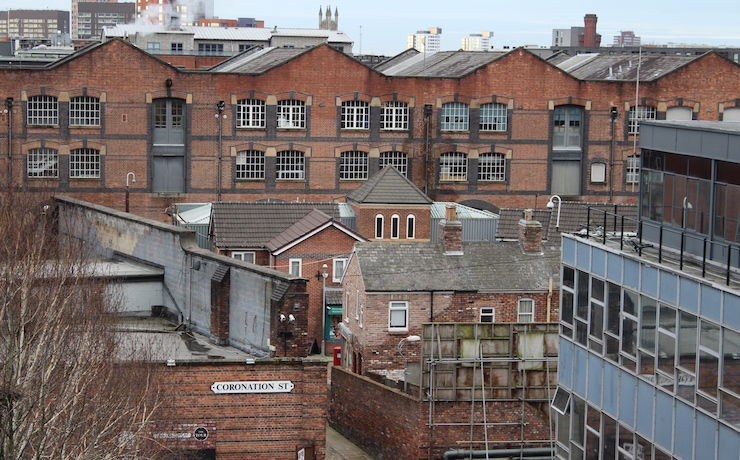 The top floor of the hotel used to be the school playground and today is called simply ‘Playground’. The building’s history as a school is reflected throughout the hotel from the chunky iron radiators to the boys and girls staircases to this rooftop ‘playground’. There’s an outside terrace which offers great views of Coronation Street and is a lovely place to hang out. It has a hot tub, a bar, tables and comfortable seats outside. Inside on the same level are various seating areas and cosy corners. I took some photos and then headed down to our room to gather the kids up for breakfast. 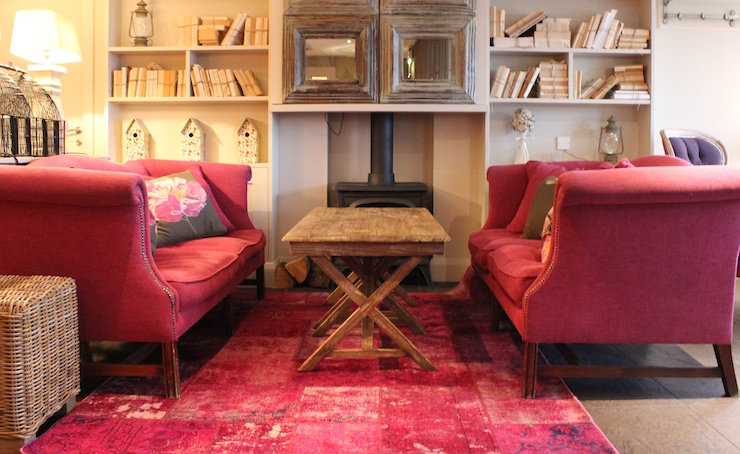 Breakfast was a luxurious but relaxed affair on the balcony of the hotel bar. We sat at a low table on upholstered chairs. There was a breakfast buffet which we were invited to help ourselves from and we were also given menus from which to choose hot food which was cooked to order. I had a cheese and mushroom omelette which was delicious but so filling that I couldn’t eat all of it. My nephew ordered ‘American style sweet pancakes’ and was initially disappointed when his plate arrived with a solitary pancake on it – he’d expected a pile. But it was a big pancake and he said that it was enough for him. My daughter had boiled eggs and toast. Everything that I ate was very good and the kids said that they enjoyed their food. 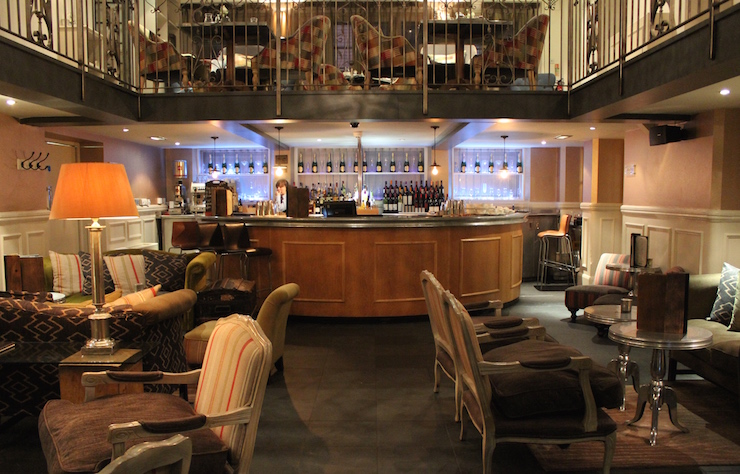 After breakfast it was time to check-out. We left our bags to be looked after at the hotel reception and set off to explore the city on foot before going to Manchester University for a campus tour. When we went to collect our bags that afternoon I asked the receptionist about the history of the building. She told me that it had been used as the Coronation Street Green Room for many years until it became a hotel.

All three of us loved the Great John Street Hotel and I think that it’s an excellent place for families with children to stay. It’s also the perfect place to stay if you’re going on the Coronation Street Tour or visiting the nearby Museum of Science and Industry.

Classical Grand Rooms (like the one where we stayed) at the Great John Street Hotel cost from £198 per night. There’s a charge of £25 per night for additional beds. There’s no charge for cots or highchairs. There are no directly interconnecting rooms at the hotel but there are some rooms where a corridor can be closed off to make two rooms into a private area. Breakfast costs from £16 to £18 per person.

Disclosure: We were guests of the Great John Street Hotel for the purposes of this review.