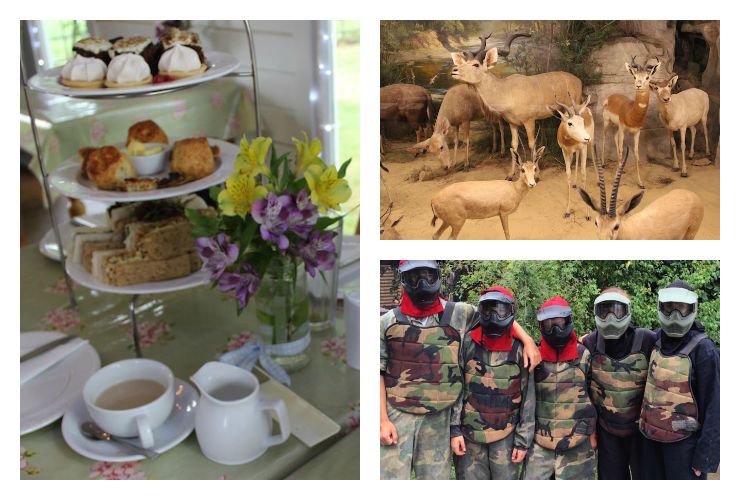 ‘Mum, I can’t believe you said that. Who says that? It’s so embarrassing’ says my son, in an outraged tone. ‘I’m proud of you and ashamed at the same time’ says my younger nephew, solemnly. My sister laughs and says: ‘Well I didn’t know what ‘re-spawn’ meant either!’

We’re talking about paintballing. I’m with my 12 year-old son, my sister and her two sons, who are 14 and 17 years old. We’re driving back home after spending the day at Quex Park near Margate in Kent in the South of England. Quex Park is an historic country estate which dates from the 15th century.

In the 1890s the traveller and naturalist Percy Powell-Cotton, the estate’s owner at the time, founded a museum at Quex Park to exhibit the stuffed African and Indian mammals which he’d collected on his travels. Today you can still see these animals displayed in their original dioramas at the Powell-Cotton museum, as well as many other objects and images from Percy’s expeditions. The boys were intrigued by the displays (especially the animals and the weapons) and agreed that it reminded them of the film Night at the Museum: 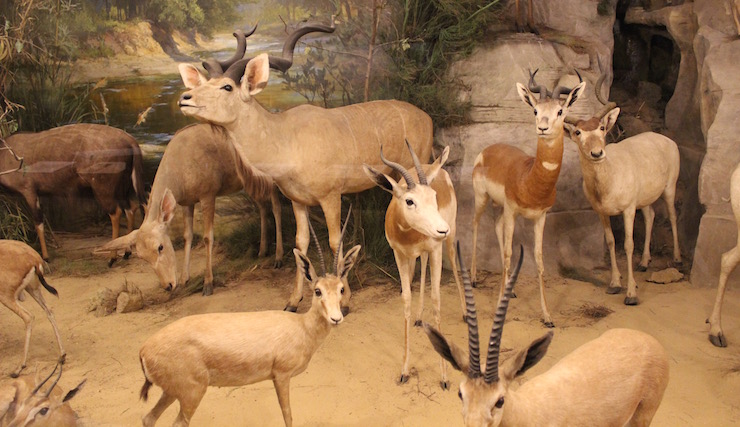 Named the ‘UK’s Most Inspiring Museum’ in the 2014 Museums & Heritage awards, the Powell-Cotton museum is an unusual place to visit. Percy went on more than 28 collecting trips, meticulously recording the details of the creatures and objects which he brought back, and of the tribal people whom he met. We enjoyed exploring the museum, especially the handling collection in Gallery 6 which contains more than 700 objects. 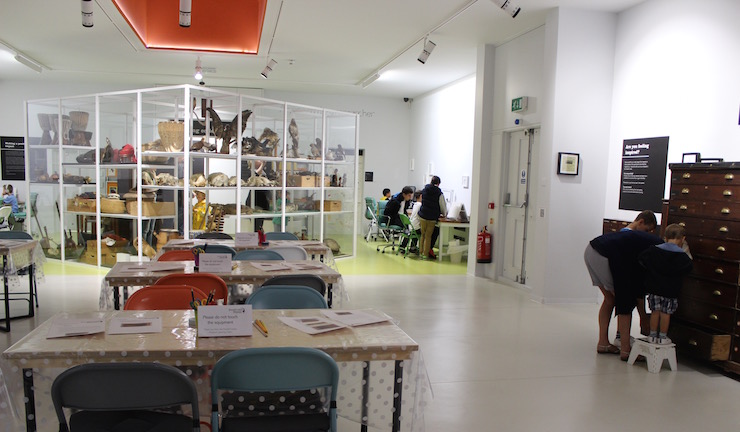 The objects are displayed in an open, transparent cube and they’re all waiting to be handled. The boys particularly liked the musical instruments in this gallery as well as the drawing area.

The museum is attached to Quex House, a 19th century mansion which is open to the public at certain times. The house wasn’t open when we were in the museum so we’ll have to go back to see it another time. 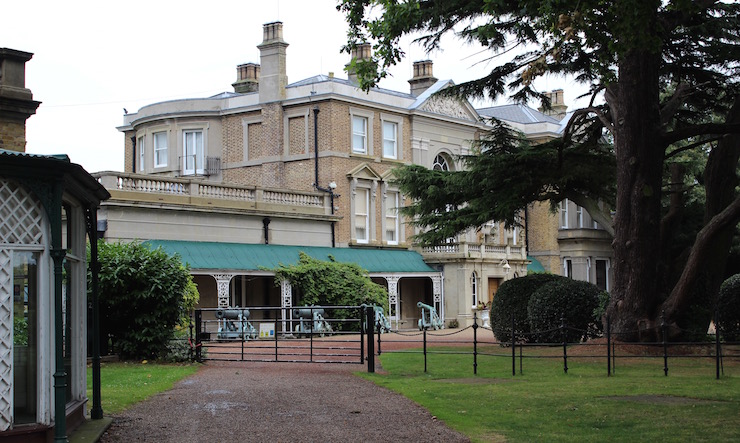 There are seven acres of historic gardens and woodland around the house and we borrowed some umbrellas from the museum so that we could explore a little of them in the rain. The gardens were originally laid out in the fifteenth century and are beautiful. There are lots of places to play or have a picnic: there’s a wide expanse of lawn behind the house, a walled garden bursting with flowers, a domed den hidden by shrubs and some gorgeous old greenhouses. 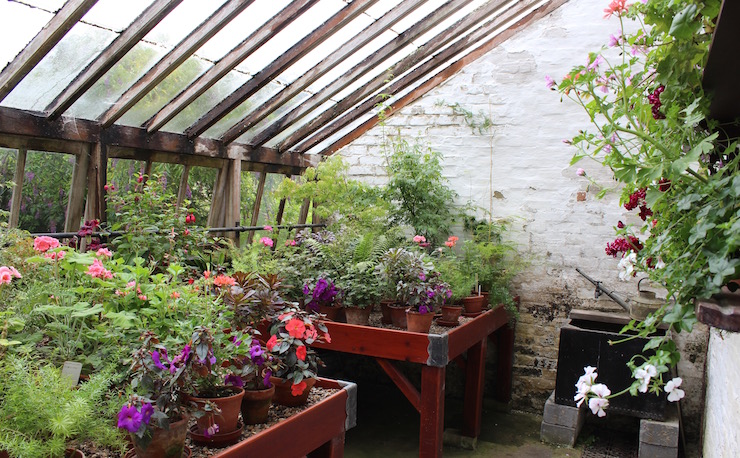 Beyond the house, museum and gardens there are many other things to do at Quex Park. Within the estate there’s also a craft village, two cafes, an outside play area, an indoor soft play area, a garden centre, a farm shop, a maize maze and a paintball centre offering various activities.

We had lunch at the fresh and homely Mama Feelgoods Cafe which is in front of the museum. The cafe serves home-made breakfasts, lunches and teas. We were given an amazing Afternoon High Tea (£15.95 per person including unlimited tea to drink) of tasty sandwiches, perfect scones still warm from the oven, jam, clotted cream and a selection of cakes which were just too delicious. 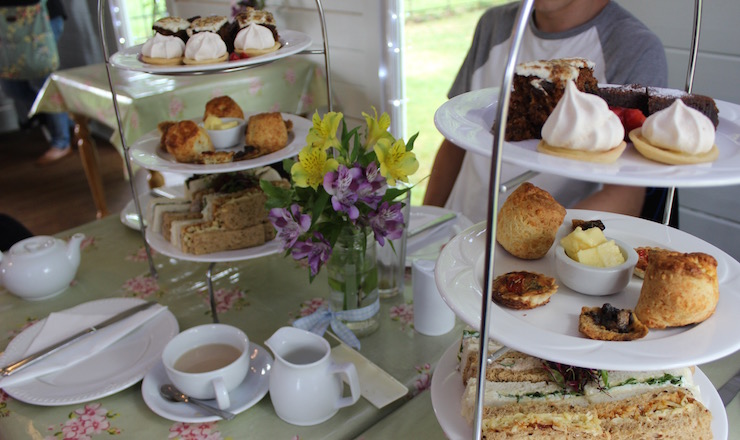 I’m not surprised that the cafe was full and I’d definitely recommend it. If you’d like to have Afternoon High Tea you need to book it at least 48 hours in advance.

After lunch it was time for the highlight of the day for our three boys: paintballing. The paintballing centre is run by an independent company called Leisure Quest, who also offer activities such as archery, laser tag and tomahawks (if you don’t know what tomahawks are, read on). I’d never been paintballing before and nor had my sister. Putting on the protective gear which we had to wear in order to take part in paintballing felt strange: I’ve not worn a boiler suit, body armour, balaclava and a mask before – at least, not all at the same time. 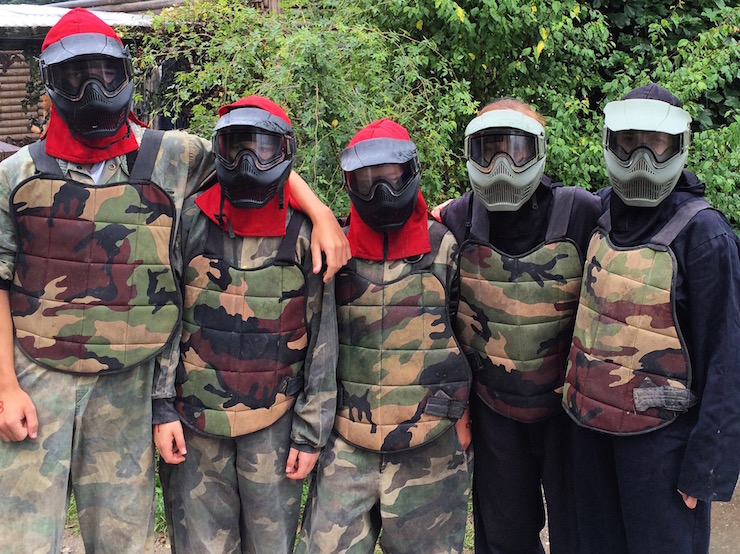 Ready for paintballing at Quex Park with my sister and our sons. Copyright Gretta Schifano

Once we were all kitted out we were given a safety briefing and shown how to use the paintball guns. My sister and I were both nervous. ’Why are we doing this?’ she whispered to me as we followed our sons in to the paintball arena for the first game, loaded guns in our hands.

There were 12 of us paintballers in total, divided in to two teams of six, a mixture of parents and boys. My sister and I were playing against our sons. We played six games, two in each of the three arenas, restocking our guns with paintballs after each game. At the start of each game a marshall explained what we had to do and asked if we had any questions. I always did, including the one about ‘respawning’. (It means that when you’ve been shot you can run back to the start and join in again. In case you didn’t know). Once we’d played the first game and I’d been on the receiving end of a few paintballs (mainly from my son and nephews) and felt how much they hurt (enough to leave a bruise) I relaxed and found that I really enjoyed myself. 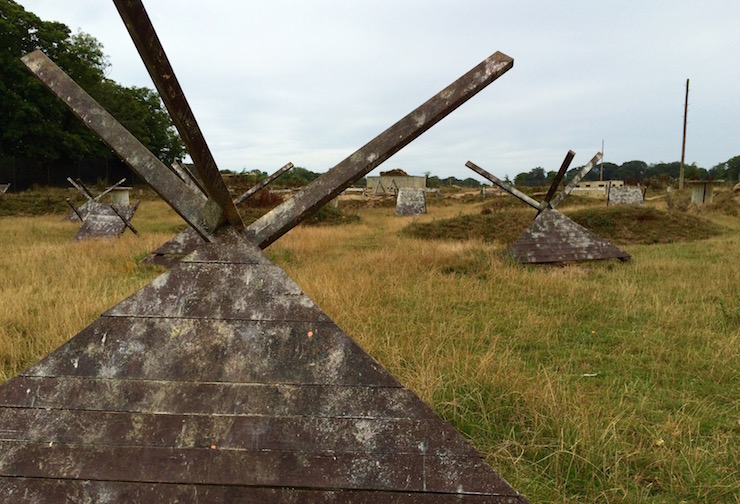 One of the Quex Park paintball arenas. Copyright Gretta Schifano

Tomahawks are axes with short handles which you throw at a target. The boys were keen to try out tomahawks so, once we’d finished paintballing and taken off our paint spattered protective gear, we headed to a different field to meet Aaron Young, the tomahawks instructor. Aaron gave us a safety briefing and then demonstrated how to throw the axes. The target was a pile of tree trunk sections which I managed to hit only with the wooden handles of the tomahawks. Throwing them so that they stuck in the wood was trickier than it looked, although my elder nephew was able to do it very well, straight away. 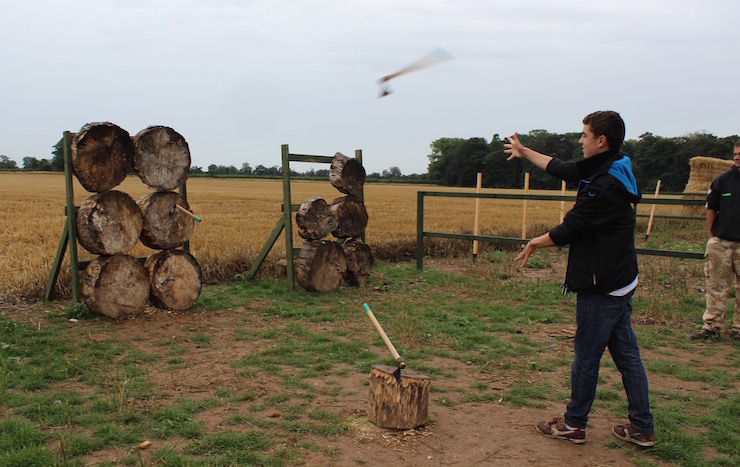 When we first arrived at the park we stopped for a coffee at Quex Barn Farm Shop. The farm shop and cafe are in a restored barn and I’d planned to return there to buy some local produce before we left for home – but by the time we got back there it was after 5pm and the shop was shut. 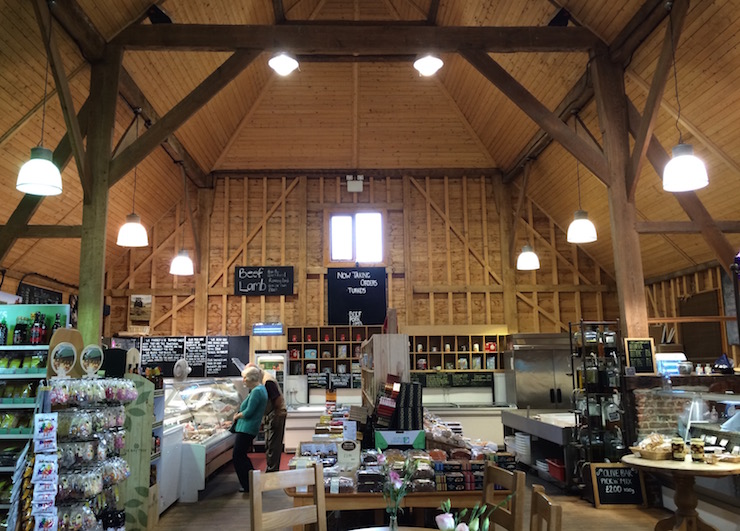 We all really enjoyed our day at Quex Park. I think that it caters very well for different tastes and age groups. It’s the sort of place that you could return to again and again and I’d definitely recommend it as a great place for a family day out.

There’s no charge to enter Quex Park itself but you have to pay for what you choose to do there. Entrance to the Powell-Cotton Museum, house (when open) and gardens costs £8 for adults, £6 for under-16s and is free for under-5s. Paintballing costs from £5 per person for a two-hour session including 50 balls. Tomahawks costs from £15 per person for a one-hour session. For more information about the full range of activities on offer (including pricing) go to the Quex Park website.

Disclosure: We were guests of Quex Park for the purposes of this review. All opinions, words and images are my own.

Have you been to Quex Park? If so, what did you think of it? If not, does it appeal to you?