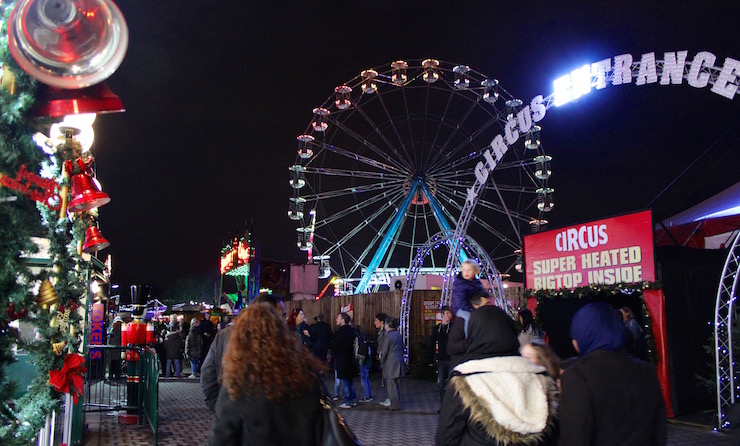 A couple of days before Christmas we had a fun day out at Winterville in East London. I was with my sister, our kids and my brother’s youngest son – there were seven of us in all, two adults and five teenagers (ranging from 13 to 17 years old). We went to Winter Wonderland in Hyde Park a couple of years ago and we were interested to see how Winterville compared.

Winterville is a pop up festive town which is in its second year at Victoria Park, one of London’s oldest public parks. We visited on Winterville’s last day of opening for 2015, but the attraction will be back again next year and so I’m writing a review of it in case you’d like to go there in future.

Winterville invited me along with my family after I wrote about the attraction as part of my Christmas London roundup. There’s a wealth of things on offer at Winterville, including ice skating, a circus, a pantomime and a woodland cinema, which are all best booked in advance, as well as a Ferris wheel, fairground rides, crazy golf, food stalls and a children’s area for younger visitors. We booked to go ice skating and to the circus. 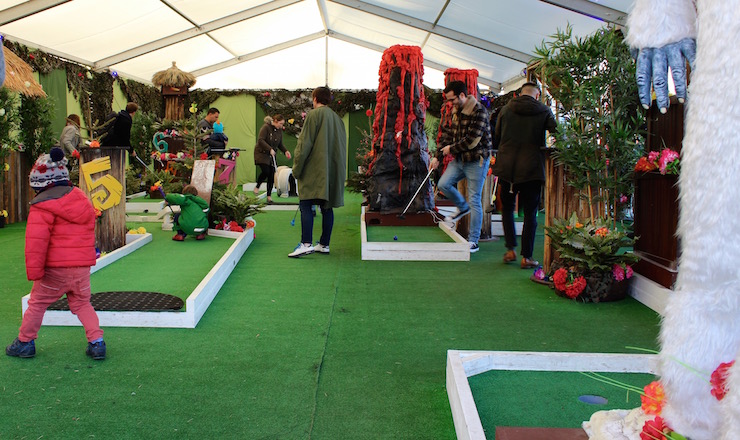 It was a mild, sunny day when we went to Winterville, and we walked to the site from Mile End underground station. The walk took us about 15 minutes and we could see the big wheel before we even reached the park. It’s free to enter Winterville but there were a couple of security guards at the entrance.

We headed straight to the Box Office to collect our tickets, picked up some Winterville maps and then went in search of lunch. We initially made our way to the Food Hall, only to find that it was closed. There were some other food stalls around the attraction though, so we strolled around all of them before deciding what to eat. Besides the food stalls there were also stalls selling stuff like drinks mats and personalised stockings.

For lunch, most of us opted for Taiwanese bao (£4 each) and chips (£3 each) from the Baos Steaming trailer. The buns were made with soy milk and were all gluten free, which was perfect for my daughter. She and I each had a delicious vegetarian bao and the others had pulled pork, which they said was very tasty. My eldest nephew chose a hotdog instead, and we all sat and ate together at one of the wooden bench tables by the bao stand.

After lunch we went to look at the rides as we had some free time before ice skating. You had to use tokens, which you could buy for £1 each, in order to go on the rides. My son and his 14 year-old cousin decided to go on a ride with a scary-looking model of a polar bear in the middle where they were whizzed around and around very fast, and screamed a lot. It cost 4 tokens (i.e. £4) to go on the ride, which seems a bit pricey to me. But the boys really enjoyed it. 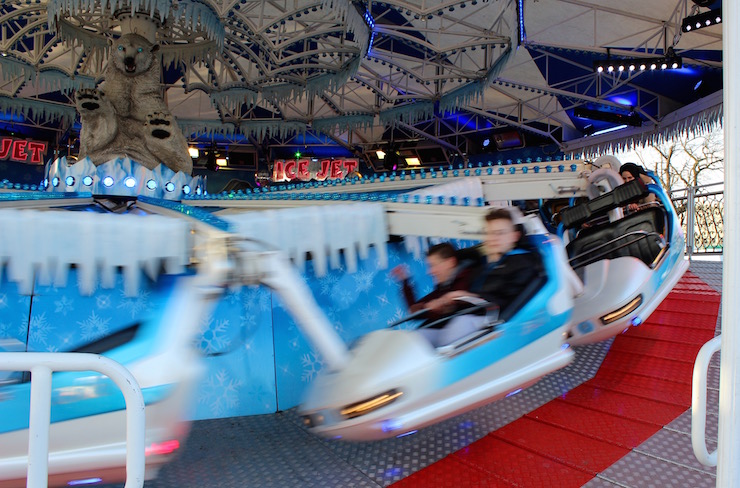 Then it was time for ice skating on the 600 square-metre outdoor rink. We queued for our skates and then inched our way tentatively on to the ice. My kids didn’t fancy skating and so they looked after our bags and watched while the rest of us all had a go. My sister and her boys were soon gliding confidently around the rink, while my other nephew and I were holding on to the side and occasionally falling over. The ice was quite rough, possibly because of the mild temparatures, and I found it quite hard to skate. It was still fun though, and my sister and her boys kindly took turns to help us two weaker skaters. 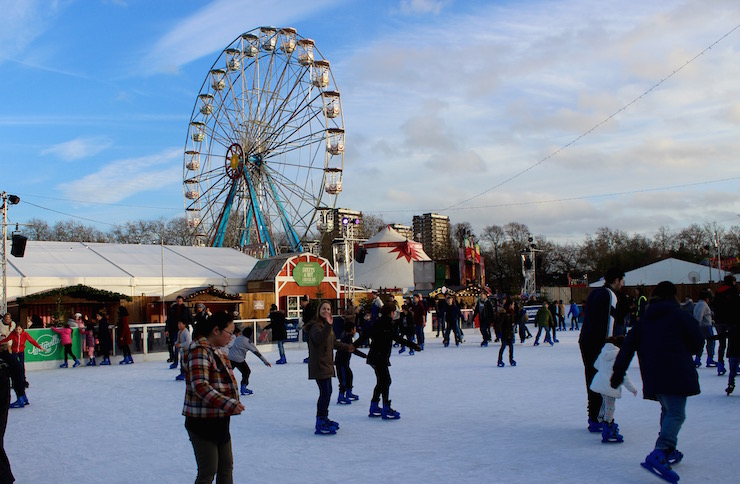 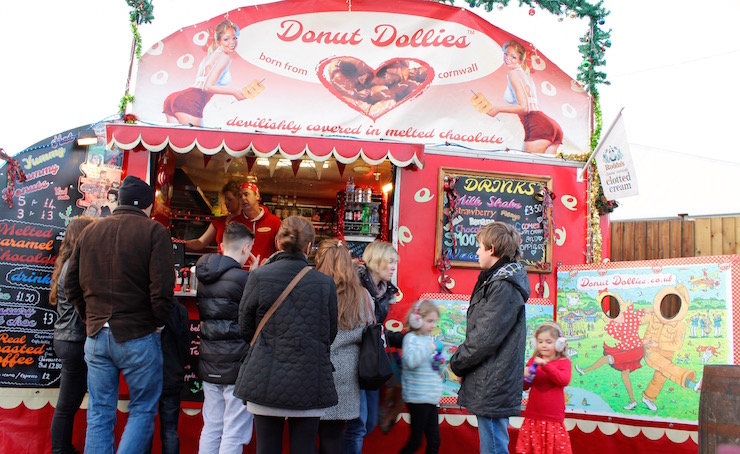 There was time for another ride before the circus performance, and so the three younger boys decided to go on the waltzer. This ride cost three tokens each, and the boys loved it. As we waited for the ride to finish, I noticed that there was a fire pit nearby with benches around it – a good idea for chilly evenings.

We’d all been outside for a few hours by this point and everyone was starting to feel cold. We were definitely ready to take our seats in the heated circus tent.

Inside the big top it was warm and cosy with heaters blasting out hot air. The entrance was decorated with fairy lights and there were cushioned benches to sit on as you went in. 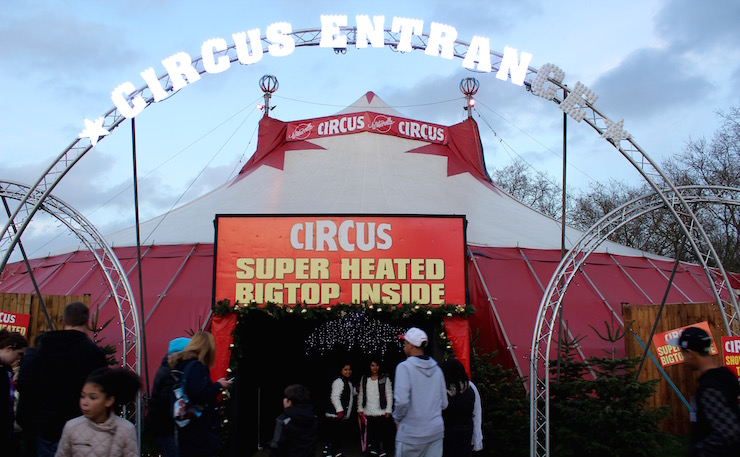 Inside the main part of the big top there were no allocated seats and we could sit anywhere. There were banked rows of plastic chairs packed tightly together – we decided that it was the Ryanair of circus seating.

The circus acts were a couple of clowns in between brilliant, joyous performances by acrobats, some of whom were from the Moscow State Circus. The four guys in the African Whirlwind troupe were amazing and the glamorous ariel artistes did some incredible things which I could hardly bear to watch, in case they fell. One was suspended by long swathes of fabric, high up above the ring. Another writhed around  in a transparent ball which she opened and closed while high in the air. There was no safety net. We all loved watching the acrobats but weren’t so keen on the clowns’ act. 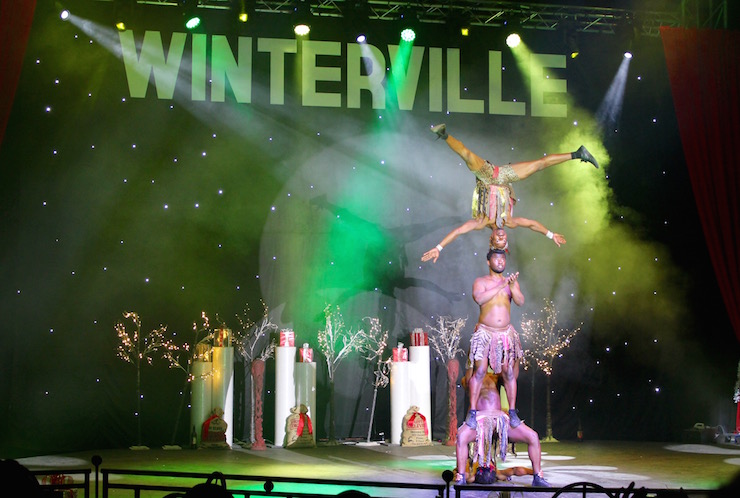 By the time the circus finished, it was dark. Winterville was twinkling with pretty lights and looked very inviting, but it was time for us to go home.

I enjoyed our trip to Winterville, although I was disappointed that the Food Hall was closed. My favourite part of the day was watching the brilliant acrobats at the circus. Although Winterville is free to enter, you could end up spending quite a bit of money there, so it would be best to plan your budget in advance. You could always take your own food and drink in order to save money. To me, Winterville felt smaller and friendlier than Winter Wonderland.

My daughter says: ‘Winterville was fine. It was less crowded than Winter Wonderland.’

My son says: ‘I liked the rides and the acrobats best’.

My sister says: ‘I think that Winterville is a really good alternative to Winter Wonderland and it’s not as expensive. I liked the ice skating best.’

Her elder son says: ‘The best thing was skating but it was a bit crowded when we were putting our skates on.’

Her younger son says: ‘The best thing was the rides, and there were lots of different ones, really scary rides and some for younger children.’

It’s easy to get to Victoria Park: just take the tube to Mile End and then it’s a 15-minute walk or a short bus ride away (bus numbers 277 or 425 take you from the station to the middle of the park).

Each month I publish a London round-up of top things to do in the city for families. You can subscribe to my blog (by entering your email address in the box on the right – where it says ‘YOU’D LIKE MY POSTS BY EMAIL?’) and new posts will be emailed to you automatically. If you’d like a London guide book, I recommend both the Lonely Planet London Travel Guide and the London Marco Polo Travel Guide. If you need accommodation, check out my post about family-friendly places to stay in the capital.

Disclosure: Winterville gave us tickets for the circus and for ice skating for the purposes of this review. This post contains some affiliate links, which means that if you clicked through and made a purchase I may receive a small commission. All opinions, images and words are my own, as ever.