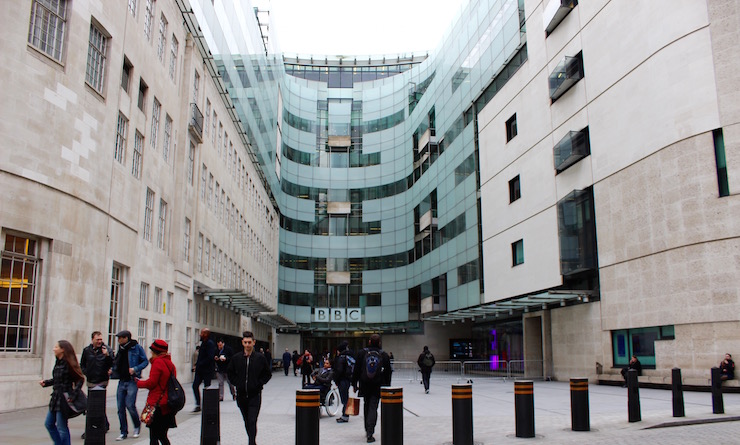 Update: The BBC Tour of Broadcasting House stopped running in 2016, after a security review. Tours of other BBC buildings around the UK continue to run.

I went on a fascinating tour of BBC Broadcasting House, along with my friend Suzanne. Broadcasting House is the BBC’s central London headquarters and is said to be the most advanced digital broadcast and production centre in the world. The original building was constructed in 1932. 70 years later it was in need of updating, and so the site was redeveloped over a period of more than ten years at a cost of £1,014m (funded by the licence fee, which is payable by TV owners in the UK). The current Broadcasting House site opened for business in 2012 and consists of a complex of buildings. It has a worldwide audience of more than 150 million every week.

While we waited to sign in for the tour, we were watched over by a Dr Who dalek. 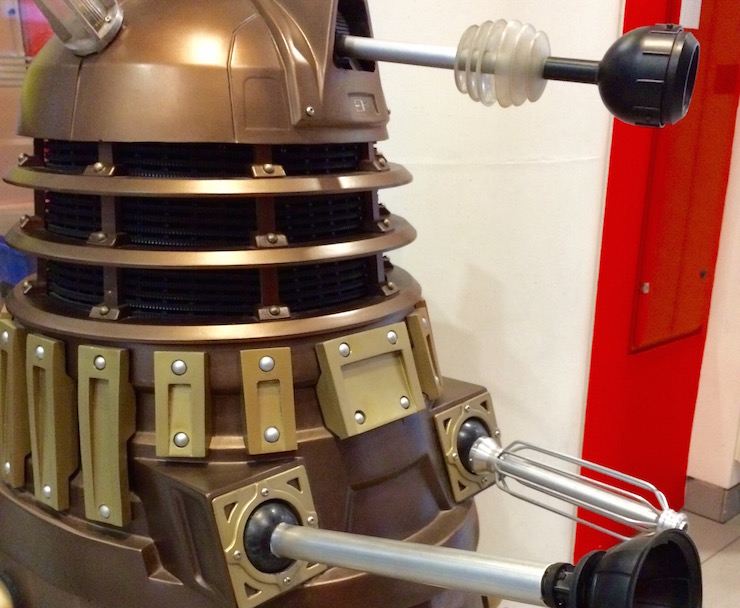 Our tour was led by a couple of friendly and informative guides who took turns to talk to the group at different stages. When we signed in, we were asked if we’d like to be in the audience of The One Show that evening. Neither of us watches the show, so we declined. Before we set off our guides warned us to ‘stay calm’ if we came across anyone famous, and I wondered who we might see on this ‘behind the scenes’ tour. There were around 20 people in our group, including a bunch of teenage media students with their teacher. The size of the group made it easy to move around and to ask questions.

We started in the Media Café, which overlooks the vast newsroom, parts of which you can see in the background of BBC TV news broadcasts. Our guide explained how news items are verified before being broadcast, and how the editors have to ensure that everything is fair and balanced. I knew that the newsreaders all prepared their own scripts, but I hadn’t realised that the weather forecasters, who are all meteorologists, have no scripts whatsoever: they have to speak from memory, while fitting in with whatever time is left after the news has finished. This sounds to me like the toughest job in the newsroom!

Once we’d seen the newsroom we went into a dummy studio which was set up to allow members of the group to read the news and to forecast the weather. 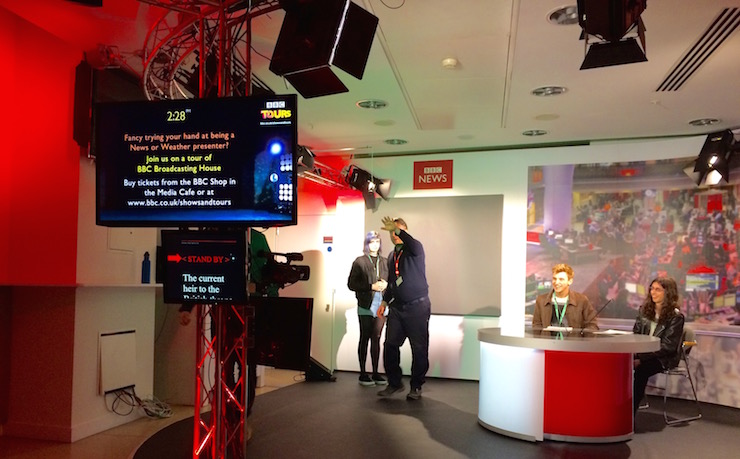 Suzanne was relieved when three of the students stepped up to have a go: she was worried that she might have been picked on for this. But the guides waited for people to volunteer rather than persuading anyone to do anything which they were uncomfortable with.

Our next stop was The One Show studio in a building right next door. In case you don’t know, The One Show is a topical magazine programme which is on BBC One at 7pm each evening from Monday to Friday. Most of our group were pretty keen to sit on the green sofas where the hosts and their famous guests sit for the show. I was surprised by how small the studio is, and I asked one of the guides how many people were in the audience and where they sat. Apparently there are only around 20 people in the audience, and they stand a couple of metres from the sofas. 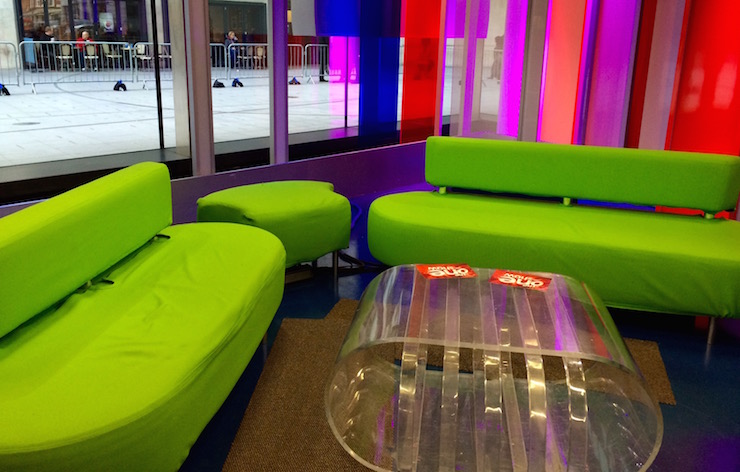 From here we went to the original Broadcasting House, a beautiful art deco building. Inside, we were shown the microphone which was used by King George V for the very first royal Christmas broadcast, in 1932, and a 1930s BBC microphone, a replica of which was used in The King’s Speech film. Our guide explained how General de Gaulle broadcast to France from this building during WWII. 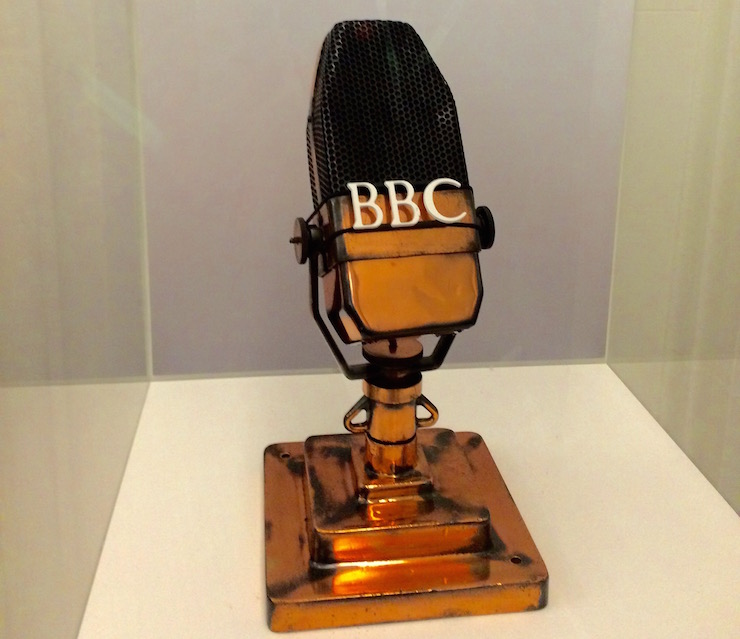 At the centre of Broadcasting House is the BBC Radio Theatre, which was used as an air-raid shelter during WWII and which our guides called ‘London’s best-kept secret’. Radio shows and musical performances are broadcast from here to live audiences who apply online for free tickets. There are a maximum of 400 seats for each show, and artists such as David Bowie, Ed Sheeran, Elton John and Coldplay have all performed here. Apparently, the artists who perform here, whoever they may be, are all paid the same fee by the BBC, and that fee is £71 (I love that fact). While we were in the theatre we heard a recording of a news bulletin which was being broadcast at the moment when the building was bombed in 1940. In the recording you hear the sound of a huge explosion which causes newsreader Bruce Belfrage to pause, briefly, before continuing to reading the news. 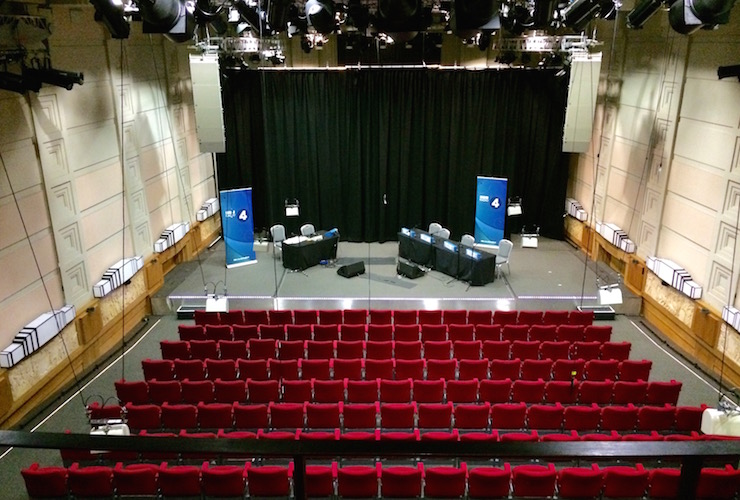 For the final part of the tour we were invited to record our own radio drama in one of the studios in the old building. Five of the students volunteered to read parts from a script, to much hilarity from their classmates, whilst our guides created sound effects using all manner of devices. We listened back to the recording, and then it was time to head back to the Media Café and hand in our passes. As we were leaving the studio we spotted the Strictly Come Dancing winners trophy on the windowsill. My friend had her photo taken holding it, to send to her Dad, a dedicated Strictly fan. 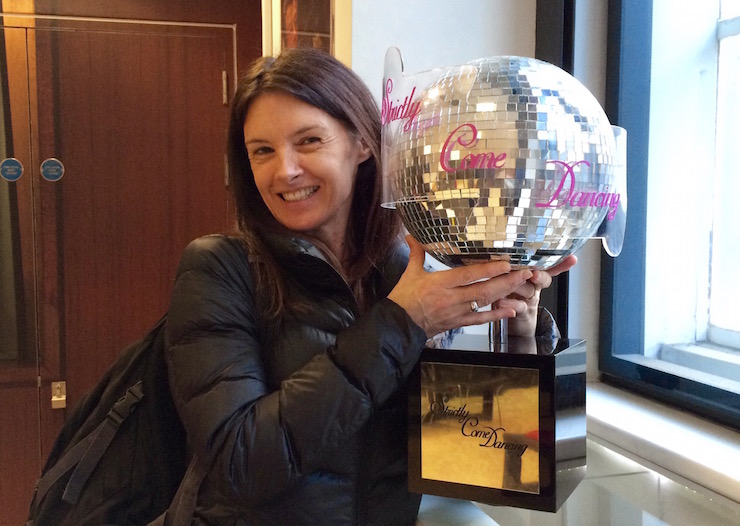 There are BBC Tours on offer in other parts of the UK, including the Children’s Interactive Tour of BBC Newcastle for children aged 6-12 years old, and the CBBC Interactive Tour in Salford.

I found the BBC Broadcasting House Tour to be fascinating, especially the historical aspects. I think that my kids would probably be bored by the tour, but those who like performing or who are interested in a career in TV or radio would like it.

Suzanne says: ‘I loved seeing the old radio theatre and will definitely be applying for free tickets. We spent a bit too long in the One Show studio, it was the least interesting bit.’

Tickets for the BBC Broadcasting House Tour cost £15 for adults and £10 for children (9-15 years old). Under-9s aren’t allowed on the tour. It’s essential to prebook as numbers are limited.

For more ideas of things to do in London, check out my monthly London roundups here. If you’re looking for a London guide book, I recommend both the Lonely Planet London Travel Guide and the London Marco Polo Travel Guide. If you need accommodation, check out my post about family-friendly places to stay in the capital.

Disclosure: Our tickets for the BBC Tour were free of charge, for the purposes of this review. This post contains some affiliate links, which means that if you clicked through and made a purchase I may receive a small commission. All opinions, images and words are my own, as ever.