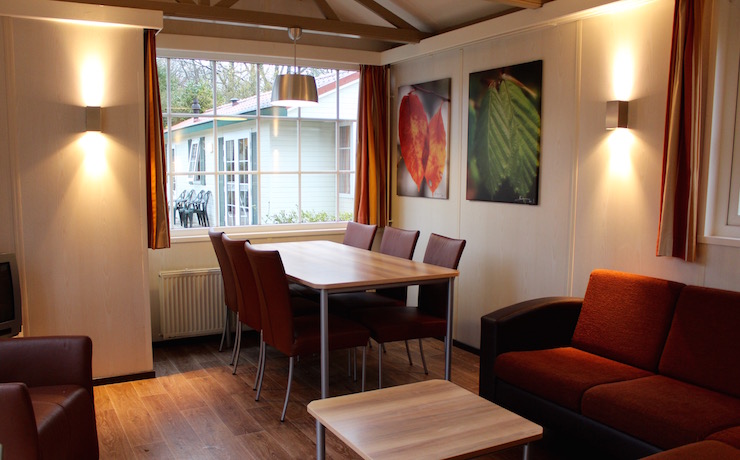 This is my second post about my trip to Holland during the Easter holidays with my son, sister and nephew. I’ve already written about our relaxing ferry crossing from Harwich to the Hook of Holland with Stena Line. This post is about our accommodation at Duinrell holiday park in South Holland, which was arranged by Holiday Park Specials.

Duinrell is an astonishing place. It’s a family-owned and run holiday park in a beautiful woodland setting in one of the wealthiest areas of Holland, to the north of The Hague. It started as a play park in the grounds of a country estate, and today offers enough attractions to keep kids of any age occupied. It has an indoor water park, an amusement park, a soft play area, high ropes, zip wires, bikes and go karts for hire and probably more things which we didn’t have time to discover during our six-day stay. There’s so much to do at Duinrell that my son, 13, and nephew, 14, soon got over the lack of wifi on offer.

We stayed in a duingalow at Duinrell. The word duingalow is presumably a combination of bungalow and Duinrell. Whatever, basically our duingalow (number 412, in case you’re interested) was a kind of prefabricated bungalow, a step up from a mobile home in that it had central heating. We were glad of the central heating because when we went, in April, it was pretty chilly in the mornings and evenings.

The accommodation was basic, but it was comfortable, homely and reasonably well-equipped. Here’s a very short video which I made of our duingalow just after we arrived:

As you can see, there were three bedrooms, a bathroom and an open plan kitchen, sitting and dining room. When we arrived, the interior was clean but it smelt a bit musty, I guess because it hadn’t been used over the winter season. The bedrooms were all quite cramped, and we found the bunk bed room to be such a squeeze that we decided to use it for storing our luggage rather than to sleep in. 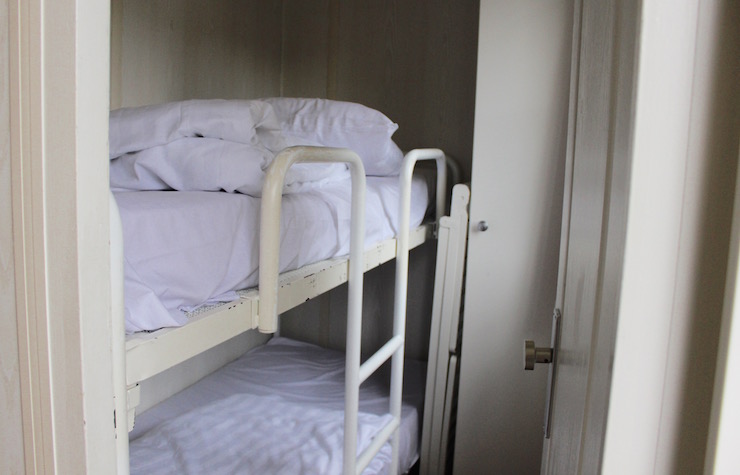 My sister and I shared a twin room which was only slightly more roomy – we had to stand on the beds to get dressed, because that was the only way to reach the storage space. It wouldn’t be possible to fit a travel cot into any of the bedrooms, unless you removed one of the beds.

The bathroom was also quite cramped and basic, but it had what we needed, and we were glad of its heated towel rail. The boys opted to shower at the park’s swimming pool rather than in the duingalow. 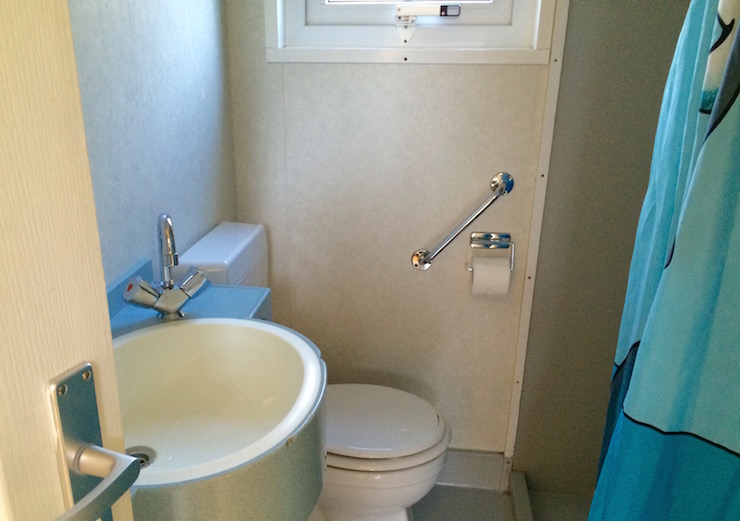 The galley kitchen had everything that we needed if we wanted to cook: hob, combination microwave/oven/grill, fridge with tiny freezer compartment, dishwasher, kettle, toaster and plentiful supplies of crockery (although no mugs, just small cups) and utensils. The wall cupboards were too high for us to reach (I’m 5’2”, my sister’s smaller, and the Dutch are apparently the tallest people in the world) but we managed. When we arrive there was a pack of useful stuff left out for us, such as dishwasher tablets, cleaning cloths and bin liners, as well as a pile of fresh towels. 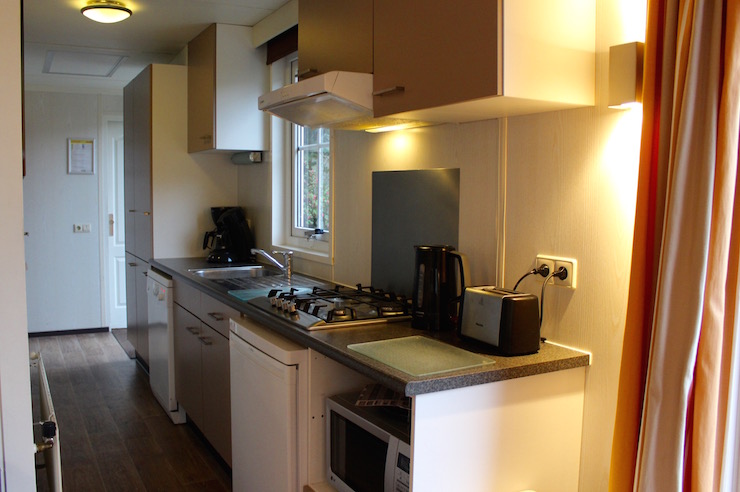 The living area was bright, comfortable and a pleasant place to relax and play card games – the boys were hooked on Monopoly Deal by the end of the trip.

Outside the accommodation was a patio and a grassy area enclosed by a low hedge, with a plastic table and chairs. There was a designated parking place just around the corner from the duingalow. 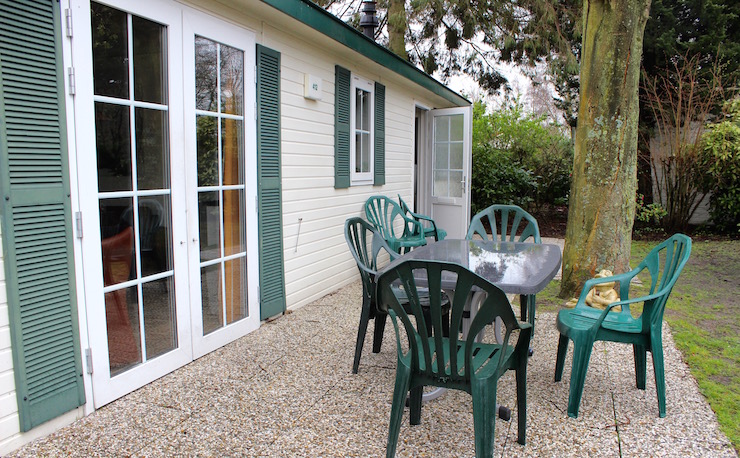 Our accommodation was near to Duinrell’s central Plaza, with its mini market, restaurant, take away outlet and pub, and also close to the amusement park and swimming pools. The park was busy, but it was also pretty peaceful as it’s quite spread out. You have to show ID when you come into the park, and it felt like a very safe environment for families with children.

Duinrell is in Wassenaar, whose pretty town centre, with its shops, cafes and restaurants, is just across the road from the park. 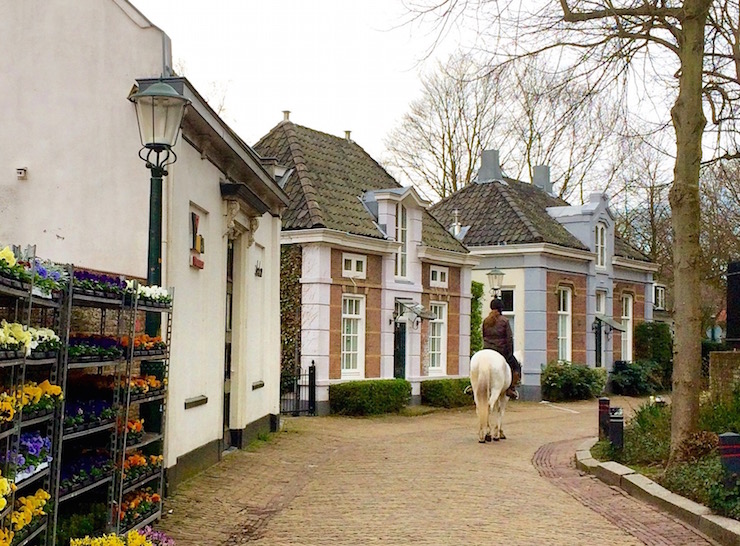 It’s just four kilometres from Duinrell to the wide, sandy beach of Wassenaarse Slag, via a safe, easy cycle route.

The cost of staying at Duinrell depends on the dates of your stay. Holiday Park Specials have a lowest price guarantee – they say that if you find your booking cheaper elsewhere, they’ll refund you the difference. At the moment they’re offering six-person duingalows for the last week in July from £923, including access to the amusement park and the pool areas.

Wifi is available at Duinrell for 7.95 euros per day, per device. 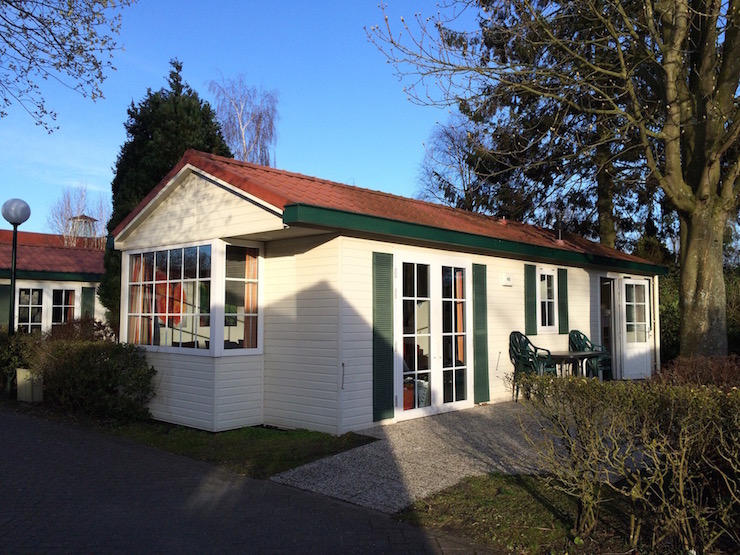 My sister says: ‘The Duingalow is clean, comfortable and basic. It’s got everything that you need. It would be better if the bathroom and bedrooms were slightly bigger’.

My nephew, 14, says: ‘I think it’s good. It’s got heating which you can adjust. The bedrooms are too small. The wifi should be included as teenagers are dependent on it.’

I say: The accommodation is basic, but it’s comfortable and it has what you need for a stay at Duinrell (apart from wifi). The bedrooms are very small, but the living area is good. It would be great if there was free wifi available somewhere in the park, perhaps in the Plaza. I think that the wifi charges are far too high but that the accommodation offers good value, especially because there’s no charge for guests to go to the  amusement park or the water park.

I’ll be writing more about our trip to Holland, including about the activities on offer at Duinrell and about the surrounding area. Is there anything else which you’d like to know about our trip?

Added 9 May 2016: Check out my post about the activities and attractions at Duinrell.

Disclosure: Our trip to Duinrell was arranged by Holiday Park Specials. All opinions, words and images are our own.