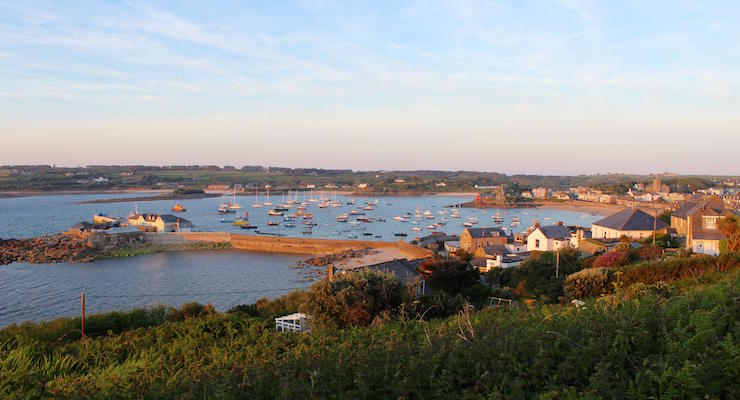 This is my second post about my trip to the beautiful Isles of Scilly with my husband and our son (13). We stayed at the marvellous Star Castle Hotel on St. Mary’s, the main island (you can read my review of the hotel here, and my post about things to do in the Isles of Scilly here).

The Isles of Scilly lie just 28 miles off the coast of Cornwall, in the South West of England, but they really feel like they’re much further away than that, both in time and geographically. Most of the land and nearly a third of the residential buildings on the islands are owned by the Duchy of Cornwall, and the archipelago is a designated Area of Outstanding Natural Beauty (AONB). The climate is milder than it is on the mainland, and there’s very rarely a frost. We had blue skies and sunshine throughout our trip, and spent our time taking boats to different islands, cycling, walking, eating and taking hundreds of photos because everywhere we went was so unspoilt and gorgeous. Our trip was arranged by the Islands’ Tourism & Business partnership.

Our boat trips were all with St. Mary’s Boatmen’s Association, a group of independent boat owners who work together to offer a comprehensive service around the islands. You buy your boat tickets from the stone kiosk on the quay and daily timings and routes are chalked up on boards nearby. 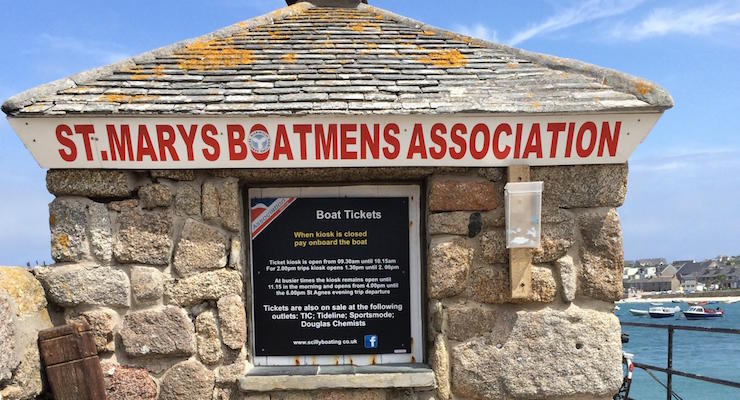 Our first day trip was to the island of Tresco, home to the subtropical Tresco Abbey Garden, and the second largest of the islands. We strolled down to the quay, five minutes from our hotel, and took a boat from there to Tresco, around 15 minutes away. Tresco is leased from the Duchy of Cornwall by the Dorrien-Smith family, and is marketed as a luxury island resort. I was surprised that there was nothing at the place where the boat dropped us off – apart from the quay. There were no buildings of any sort, just a white sandy beach and greenery. We were met by Tom Matthews, the island’s Marketing Assistant Manager, in his golf buggy. Tom took us to Tresco Bike Hire in the middle of the island, where the three of us picked up bikes and set off to explore. Cycling here was a joy, because there are very few cars or hills, the scenery is stunning and the island is so small that it’s impossible to get lost. 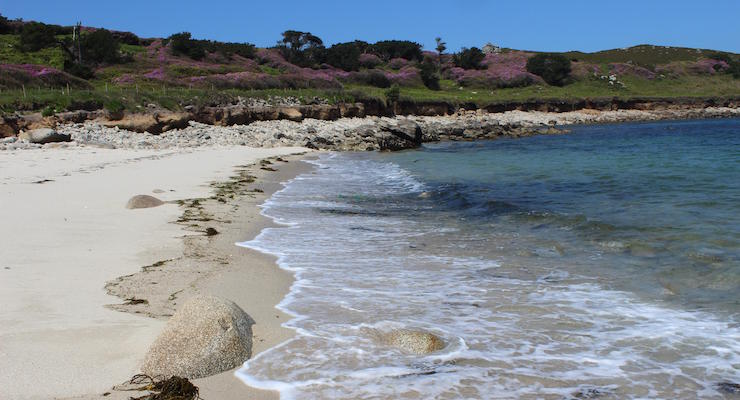 I felt as if I were in an Enid Blyton Famous Five story as we cycled along the pretty lanes. Our son got fed up after a while though, so when we stopped for a drink at the friendly Flying Boat Cafe he decided to stay there and enjoy the wifi while my husband and I went to Tresco Abbey Garden.

Tresco Abbey Garden dates from the early nineteenth century, and sits on the site of a ruined Benedictine monastery. 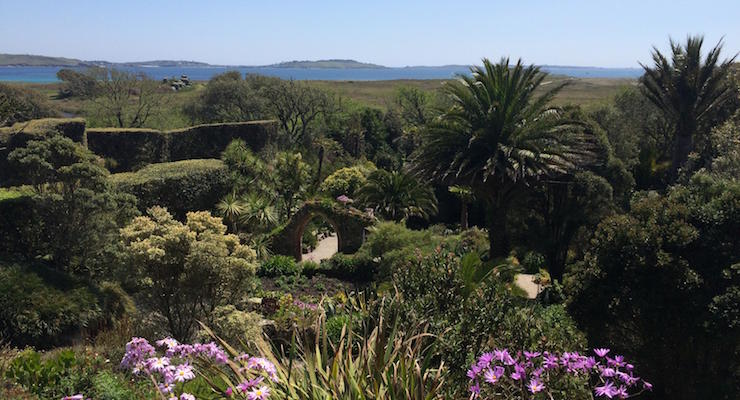 The world-renowned garden is home to around 20,000 plants from 80 countries, as well as a colony of red squirrels. Curator Mike Pelhams showed us around the garden and explained that the squirrels had come originally from the British Wildlife Centre in Surrey (which we visited many times when the kids were younger). There’s a good cafe at the garden entrance, as well as an interesting small exhibition about the garden and about the many shipwrecks around the islands. 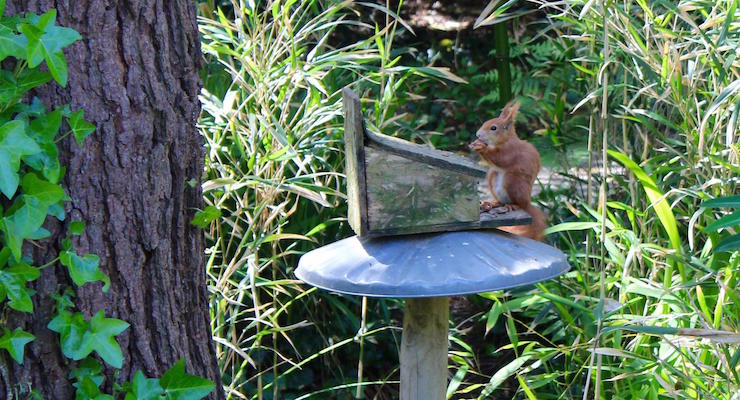 The next day we took a boat to the island of St. Agnes, via some of the outer uninhabited islands to spot some seals and puffins. Our son wasn’t at all interested in this excursion, so he opted to stay at the hotel. I was thrilled when we spotted some grey seals bobbing about in the water, but they were too far away for my camera to get a shot of them. We also saw some puffins on the water and in the air, as well as many other different birds. 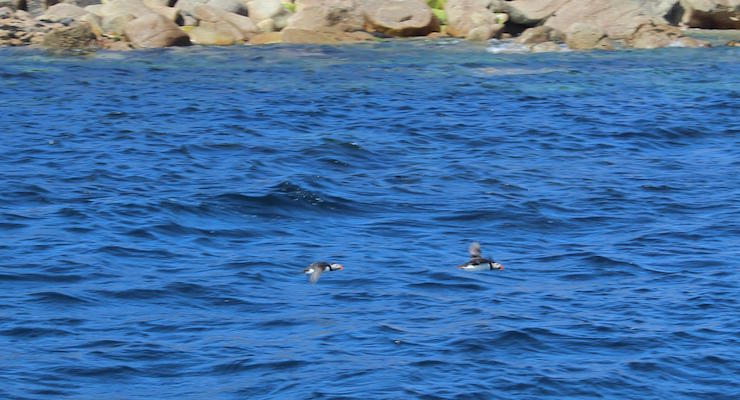 The boat dropped us off at tiny St. Agnes, which is connected to the neighbouring island of Gugh by a sand bar at low tide. We set off to explore the island on foot, and were delighted again by the glorious landscape of these islands: white sandy beaches, a wealth of wild flowers, and clear blue waters. 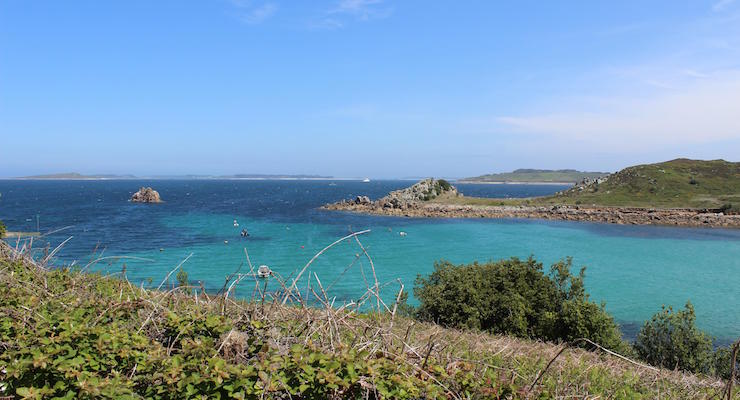 We came across the Coastguards Cafe in the most beautiful spot. After enjoying a pot of tea there we carried on walking around the coast of the island until we arrived back at the quay. We had lunch at the Turk’s Head, the welcoming pub nearby while we waited for a boat back to St. Mary’s.

That evening we had dinner at the Mermaid Inn, a friendly pub and restaurant overlooking the quay. We ate in the restaurant upstairs and had a great view of the boats below. There was a gig race that evening – the Isles of Scilly host the annual World Pilot Gig Championships, and the sport is very popular with Scillonians. The restaurant was fully booked and the bar was packed out – this is definitely somewhere that you need to book if you want to be assured of a table. I had butternut squash soup followed by fisherman’s pie, and it was all delicious. The children’s menu features dishes such as chicken goujons and ciabatta cheese and tomato pizza. 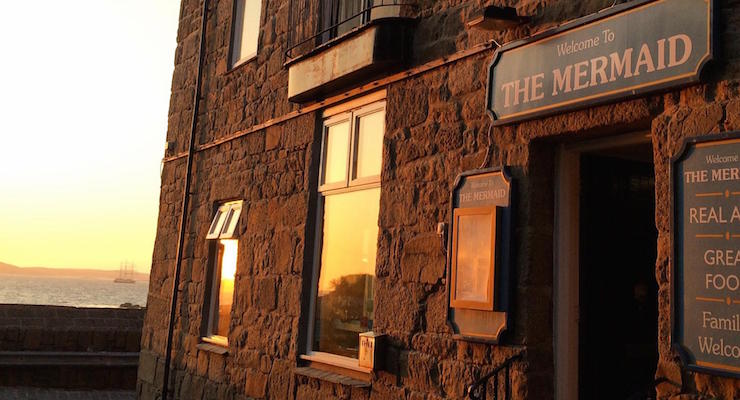 Smallest football league in the world

The next morning we went to check out the Isles of Scilly Museum on St. Mary’s. The compact museum houses Roman artefacts, a pilot gig display and material from shipwrecks, amongst other interesting things, but we were mainly concerned with a mini display about football. The islands are home to the smallest football league in the world, with just two teams: the Garrison Gunners and the Woolpack Wanderers. The teams play each other each week of the football season. The line up of the teams changes every year, as the captains go to the pub to choose their players before the start of the season. We met one of the players, local school teacher Jeremy Martin, who told us that the current age range of the players is 16 – 55. When Jeremy was a teenager, he and his football friends were featured in a promotional video series for Adidas with David Beckham and some other top players which was filmed on St. Mary’s:

From the museum we walked to St. Mary’s Bike Hire around 10 minutes’ walk away. The helpful owner, Mark Prebble, sorted us out with bikes, helmets and maps and pointed out some great options for refuelling stops. Mark has bikes available for kids and adults, as well as child carriers and tag-a-longs. St. Mary’s has some steep hills, and I did have to get off and push my bike a couple of times, but I really enjoyed cycling here. There were very few cars and the views, again, were wonderful. 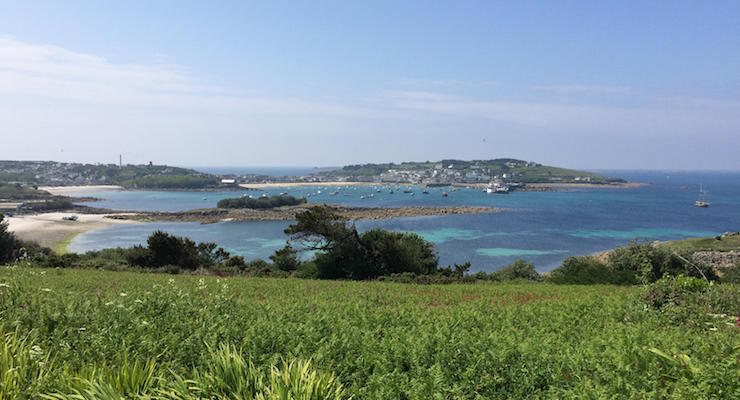 Although the island has an area of less than 2.5 square miles, it offers varied and interesting terrain. We stopped for a drink at Carn Vean café, home to some very happy hens who were enjoying the sunshine in an enclosure at the edge of the cafe garden. All too soon it was time to take the bikes back and return to the hotel – we had a tiny plane to catch to the mainland that afternoon.

My husband says: ‘It felt like being abroad rather than in the UK – the weather helped with that. It’s a great place for walking and cycling. It’s a good place to get away from it all and it’s very relaxing. It’s an easy place to cycle around even if you’re not confident on the roads because it’s so quiet. The boat trips were good.’

Our son says: ‘The people there all seem happy even though they live on a remote island. There was no cinema or any things you’d have in a city, except for the Co-op. Cycling was fine. The cafe in Tresco was nice, the people there were nice to me.’

I say: ‘I loved our trip to the Isles of Scilly. It’s a beautiful, unspoilt place which is very easy to explore on foot or by bike. It would be a great place to bring younger children, but it’s not so great for teenagers, unless they’re into nature and walking.’ 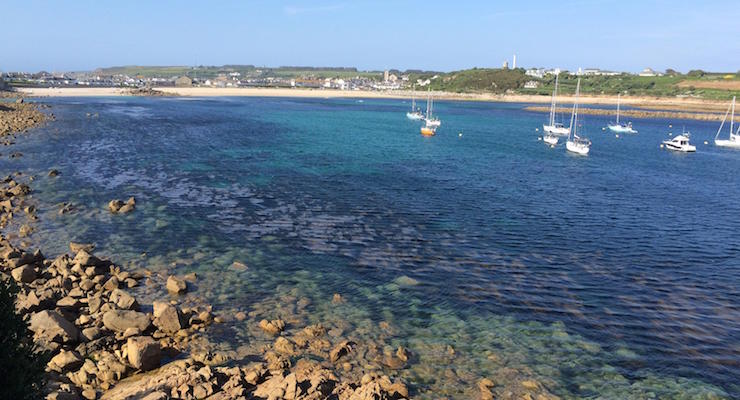 Boat trips – Returns with St Mary’s Boatmen’s Association from £9 for adults, from £4.50 for children.

You can search for Isles of Scilly accommodation here. You can find out more about the Scilly Isles by going to the official Visit Isles of Scilly website. For details of how to get there, by ferry or by plane, go to the Isles of Scilly Travel website.

Have you been to the Isles of Scilly, or would you like to go there?