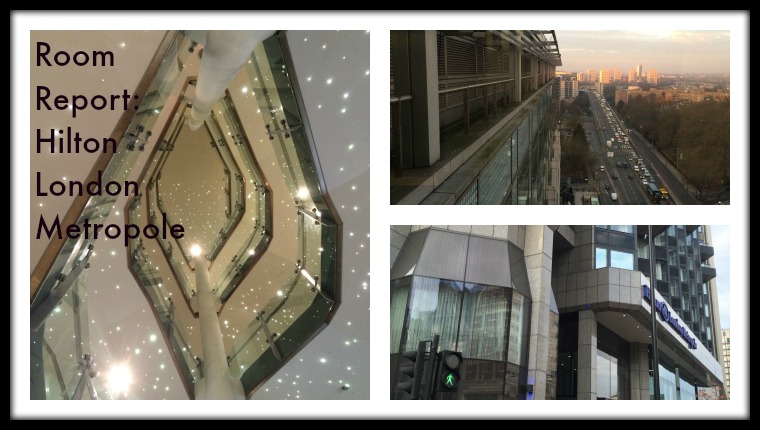 We headed up to London by train one Friday morning and took the tube to Edgware Road station. My eleven year-old son had an INSET* day and we’d been invited to review one of the family rooms at the Hilton London Metropole. We found the hotel as soon as we came out of the station – it’s a huge, grey building with more than 1,000 bedrooms and so you can’t really miss it. We walked through the revolving doors into a large, airy lobby which smelt deliciously of chocolate. It was busy in the lobby but we checked in quite quickly. Our room wasn’t going to be ready until 3pm so we left our bags at the baggage store.

The helpful hotel concierge told us which bus would take us from there to Piccadilly Circus and we headed back out into the city to explore the delights of Ripley’s Believe It or Not. We had a great time there – I’ve written about it here – and then had lunch at my son’s favourite restaurant, Nando’s. After an exhausting foray through the shopping crowds to find a pair of shoes acceptable to both an 11 year-old boy and his mother we took the tube back from Oxford Circus to our hotel. 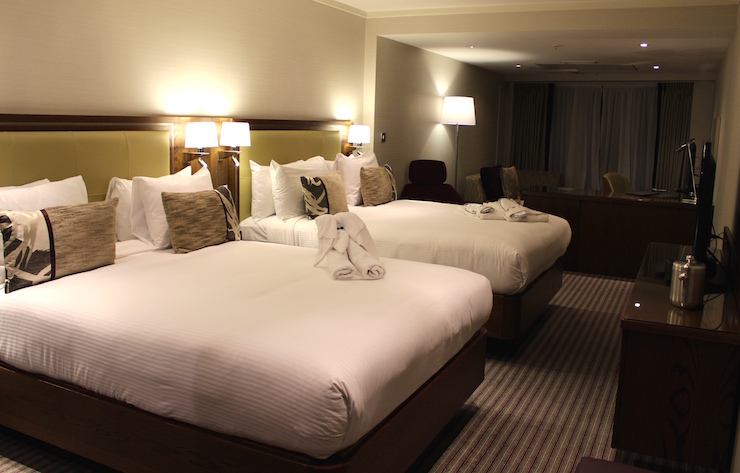 We collected our four key cards (one for each member of the family) from reception, picked up our bags and took a lift up to our Queen Superior room on the fourteenth floor. My first impression of the room was that it was huge – these rooms sleep two adults and up to three children and are said to be some of the biggest family rooms in London. There were two double queen-size beds, a sofa, a large desk, lamps all over the place, two TVs, an armchair and footstool, wardrobes, tea and coffee making things and a decent sized en-suite bathroom. The windows were huge with far-reaching views across the city.

I just had time to take some photos of the room before my husband and teenage daughter arrived. Once the four of us were together there was a very boring but totally predictable family discussion about where everyone should sleep. The kids were determined not to share a bed with each other. My husband was adamant that he wasn’t sharing with either of them. I said that I’d share with any of them. Someone had the bright idea of using the sofa bed and a man from room service came and made it up for us. It looked very comfortable but it only made things worse because nobody wanted to sleep on it.

We decided to postpone the discussion until bedtime and headed out for dinner. (We ate at an Italian place near to the hotel which was OK but not great so I’m not going to name or recommend it here. We all agreed that Pizza Express would have been preferable). After dinner we hopped on a bus to go to see the beautiful Christmas lights and shop windows along Oxford Street. 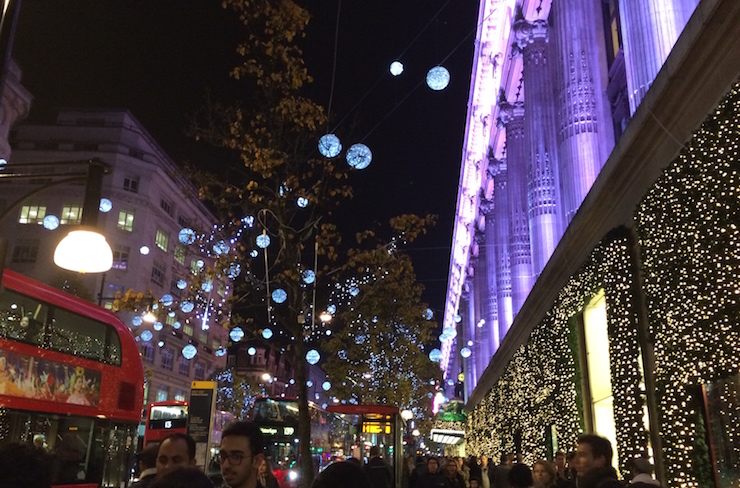 By the time we got back to the hotel it was bedtime. Our discussions over sleeping arrangements resumed until my husband took possession of the sofa bed and our son announced that he’d share with me.

Next morning I was woken by my son carefully and silently pulling my covers backwards and forwards to wake me. The clock next to me said that it was 7am. The room was dark and there was no sign that the others weren’t asleep. I pretended that I, too, was still sleeping. After about half an hour my son had progressed to gently kicking me. I pretended that I’d just woken up.

‘What’s the matter?’ I whispered.

‘When are we waking up?’ he replied. 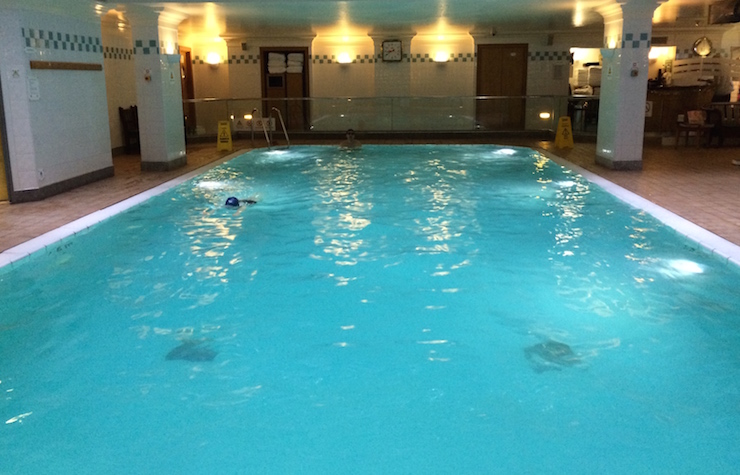 I decided to go for a swim in the hotel pool before breakfast. My husband joined me and we left our daughter sleeping. Apparently the pool is busy at times but we had the place to ourselves while our son watched from the side (he had a sore throat and didn’t fancy swimming). The pool’s a decent size -12.5 metres long – and we swam lengths for half an hour. The changing rooms had seen better days – the tiles could definitely do with regrouting – but they were clean and there were thick white cotton towels provided.

Breakfast was meant to be at Fiamma restaurant on the ground floor of the hotel. When we got there we joined a long queue of people in the corridor outside the restaurant waiting for a table. My son was worried that the food would run out and was relieved when a group of us was directed to go to the Palace Suite in the basement for breakfast instead. The windowless Palace Suite looks like a ballroom and it felt odd having breakfast in there but the food was fine. We helped ourselves to breakfast from the eggs, bacon, sausages (including veggie sausages), fruit, pastries, bread, cereal, porridge and fruit juices laid out on the buffet tables before heading back to our room and packing up to go home. 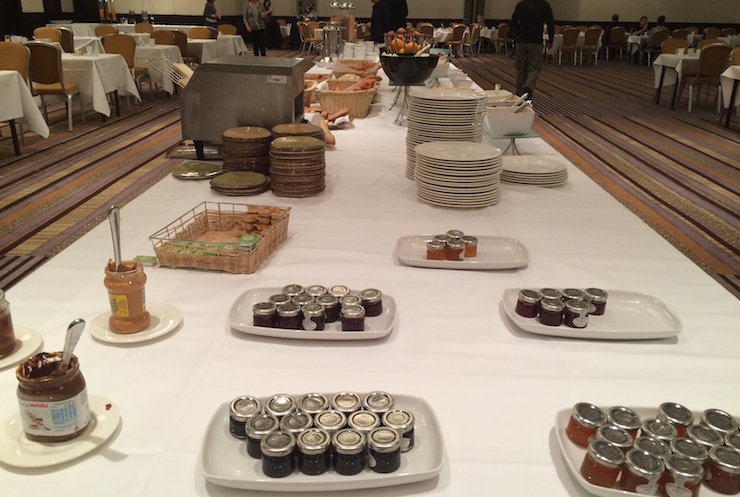 The Hilton London Metropole is a good hotel for an overnight or weekend family stay in London. The room which we stayed in was very spacious and comfortable for the four of us. I like the pool and the location. For breakfast I think that it’s better to wait in the queue for Fiamma restaurant than go down into the basement.

We stayed in a Queen Superior room which can sleep up to two adults and three children and costs from £263 per night including breakfast.

*An INSET day is a teacher-training day during the school term when the kids have a day off.

Disclosure: We stayed as guests of the Hilton London Metropole for the purposes of this review.

Would you like to write a Room Report for Mums do travel? Have you stayed somewhere recently which you’d recommend for families? If you’re interested then please contact me via the links on the sidebar or the ‘Contact’ page.