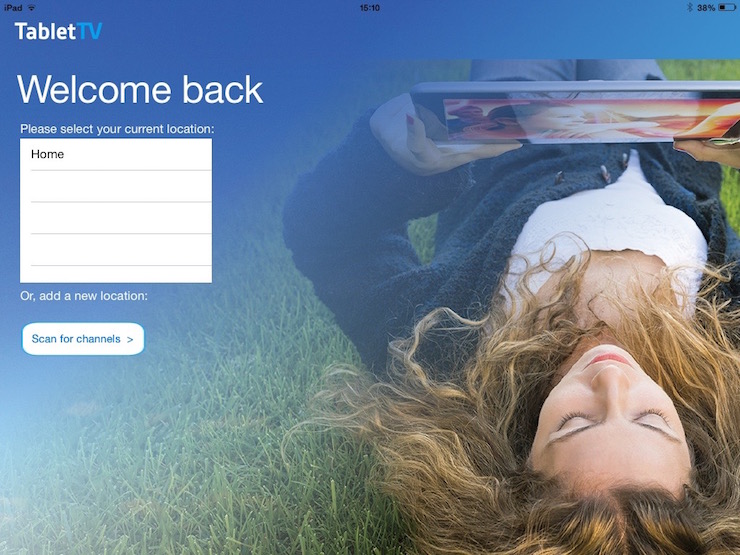 I’m often asked to review things for Mums do travel. More often than not I say no because the thing which I’m being asked to review is inappropriate for a family travel website (an adults-only sightseeing tour anyone?)

If my children are interested in something and it fits with the theme of family travel then I will review it with the kids’ input (such as with this Sleepy review). When I was asked if I’d like to review a new product called TabletTV I thought about it carefully because I wasn’t sure if it was something which I’d use.

TabletTV is a gadget which enables you to watch and record Freeview TV live on your tablet. It is a portable tuner which uses its own built-in Wi-Fi to connect to your iOS tablet via an app. It doesn’t need internet access to work, it just needs a Freeview TV signal to transmit programmes wirelessly to your tablet.

I asked the children what they thought. They were keen to use TabletTV to record their favourite TV shows to watch when we’re travelling. I hardly ever watch live TV but as the kids were enthusiastic about it I agreed to do the review.

Setting up the tuner

When the TabletTV portable tuner arrived the first thing that we had to do was to charge it up by connecting it to a computer. Meanwhile I downloaded the TabletTV app onto my iPad. My daughter had been keen to try out the product but was less enthusiastic once she realise that it wasn’t compatible with her laptop. Once the portable tuner was charged up I switched it on, extended the antenna and opened the app on my tablet to set everything up. I had to confirm that we have a TV licence and then the app searched for and found more than 100 free TV and radio stations which was very impressive. So far it was easy to set up the product.

I clicked on BBC One at the top of the list. I was sitting in our kitchen at this point and the TV signal was very weak which meant that the picture was jumpy and the sound was breaking up. I moved upstairs to a bedroom at the back of the house and propped the tuner up on a pile of books on the window sill. Now the signal was fine and we could watch live TV on the iPad using the tuner and the app. 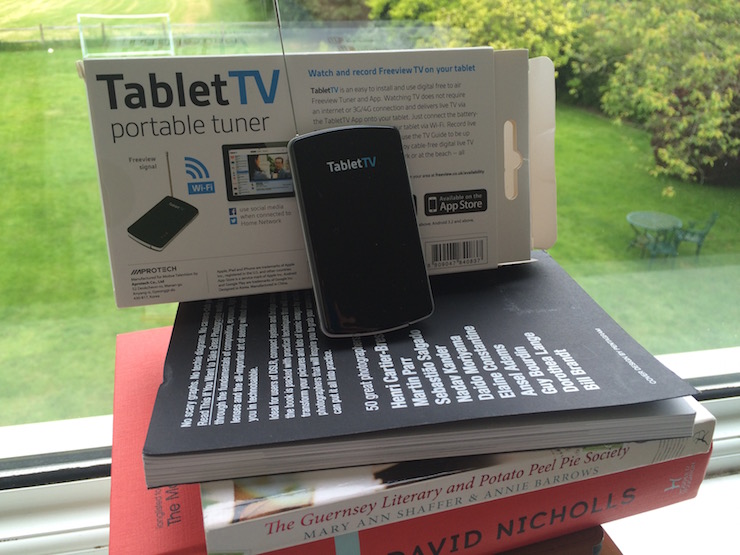 Getting a Freeview signal with the TabletTV tuner. Copyright Gretta Schifano

The next step – and the main reason for us agreeing to check out this product – was to record some TV programmes. The app has three menus at the top of the screen: Live TV, TV Guide and Recorded. This is the TV Guide screen. 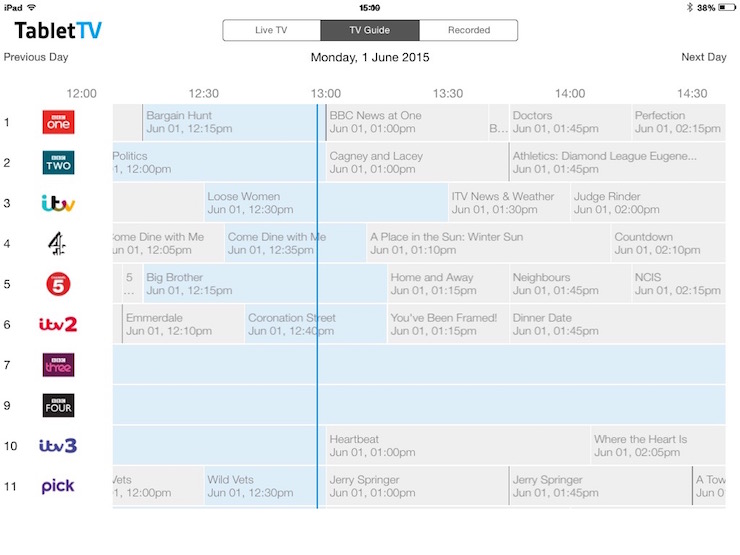 I clicked on TV Guide to see what was showing and selected something on CBBC as a test. I recorded a few minutes of the programme (by pressing Rec) and then selected it under the Recorded tab and played it back to make sure that it had worked. It had. I found that it’s simple to record programmes, but you can only record things that are actually live.

I decided to record a film which the kids might like to watch when we’re on a long journey. My daughter and I looked at the TV listings for the day and found that Cats & Dogs was showing on ITV2 that afternoon. I set myself an alarm as a reminder and then five minutes before the film was due to start I went upstairs, switched on my iPad and the TabletTV tuner, selected ITV2, waited for the film to start and pressed record. I checked that it was recording every so often and it seemed to be working.

The film lasted for an hour and 45 minutes. When I went to turn off the tablet and tuner a few minutes after the film had ended the tuner had run out of power and switched itself off.

I wanted to see how much of the film had recorded before the tuner gave out so I tried to select the film to view. I assumed that I would be able to view the recording on the tablet without the tuner but I was unable to open the app to view it until the tuner was charged up and connected again. Once the tuner was charged up and I’d found the recording I realised that there is no way of fast forwarding recorded programmes. The only way to see how much of the film was recorded is by watching it. This also means that you can’t skip adverts, which is very annoying. 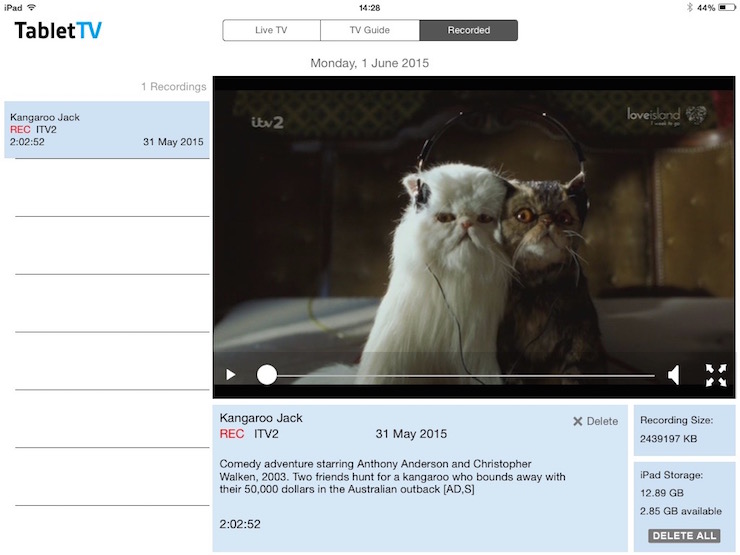 I eventually played the film to the end and found that the whole thing had actually been recorded even though the tuner’s battery had died by the time I went to switch it off.

This product would be useful if you have an iOS tablet and a TV licence and you want to watch Freeview TV on the move – as long as you can find a strong Freeview signal. I found it very limited and frustrating to use for recording programmes and watching them later. The product would be greatly improved if you could schedule recordings and if you could fast forward and rewind recordings. I’m not sure how much my children will actually use this product.

Do you think that this is something which you would find useful? Have you tried out this gadget?

Disclosure: I was sent a TabletTV portable tuner for the purposes of this review. All opinions and content are my own, as ever.