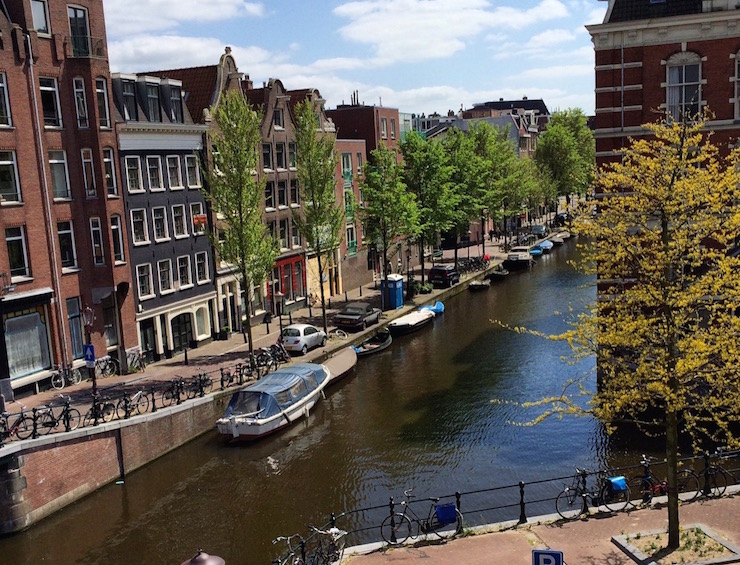 I love travelling with my kids but sometimes, as long as I can find someone to look after them while I’m away, I also enjoy travelling without them. Once a year I have a weekend away with three lovely friends without any of our partners or children. One such trip was to Amsterdam for four days in May – and it was great.

There’s a wealth of flights connecting Amsterdam with the UK. Three of us flew with Easyjet from London Gatwick to Amsterdam Schiphol. 40 minutes after we had landed, our other friend, who lives in Italy, arrived on a flight from Turin. We all met up in the arrivals hall and then walked through the terminal to the train station to catch a train into the city centre. We queued for our tickets (€4.10 single) and took the 20-minute train journey to Centraal Station. From there we took a taxi to our apartment – we could have taken a tram but decided on a cab because of our luggage.

Three of us had been to Amsterdam before and we all agree that we’d like to stay in the Jordaan district. The Jordaan is a formerly working class area which has a peaceful, village atmosphere. It’s within walking distance of the cultural sites which we wanted to see and is away from the Red Light District. The four of us love hanging out together and we prefer staying in an apartment to a hotel. We booked an AirBnB apartment in the Jordaan online a couple of months before our trip and it worked well for us. It was in a traditional town house next to a canal and it was all very cosy. Unfortunately there were issues with the plumbing, and so I can’t recommend this particular apartment – although I’ve had very good experiences with AirBnB before.

There are many wonderful museums and cultural sites in Amsterdam but our trip was as much about relaxing together as it was about sightseeing and so we were very selective about what we did. We walked a lot. We ate a lot. And we went to the Van Gogh Museum, Rembrandt House Museum, the Museum Van Loon and on a boat tour around the canals. I’d already been to Anne Frank’s House on a previous trip – I’d definitely recommend going there once but I didn’t want to go there again. Here’s a short video of some of the places which we went to on our trip:

The Van Gogh Museum is the most visited museum in Amsterdam. The celebrated artist died in 1890 after selling just two paintings in his lifetime. Today his work is known across the world and sells for astronomical sums. The museum houses one of the best Van Gogh collections including hundreds of letters and is a great place to learn about the artist’s life and what inspired him. It’s definitely best to book ahead if you’re going to this museum as the queues to get in are very long.

Rembrandthuis is where the artist lived from 1639 – 1658. It’s now a museum and is fascinating to visit. I loved the compact ‘box-bed’ where the maid slept in the kitchen – apparently beds were short at that time because people believed that it was best to sleep sitting up! You can also see Rembrandt’s studio at the top of the house and the drawing room which doubled as his bedroom. There was no queue at all when we visited this museum. 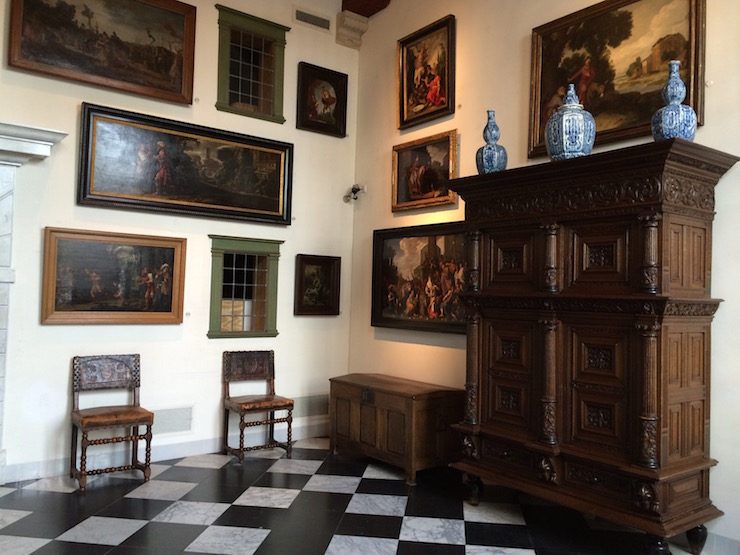 The Van Loon Museum is an aristocratic townhouse on the Keizersgracht canal. Willem Hendrik van Loon, a descendent of one of the founders of the Dutch East India Company was given the house as a wedding present in 1884 and it’s still owned by his descendants today. The Louis XV interior is beautiful and there’s also a formal garden behind the main building with a coach house at the far end. 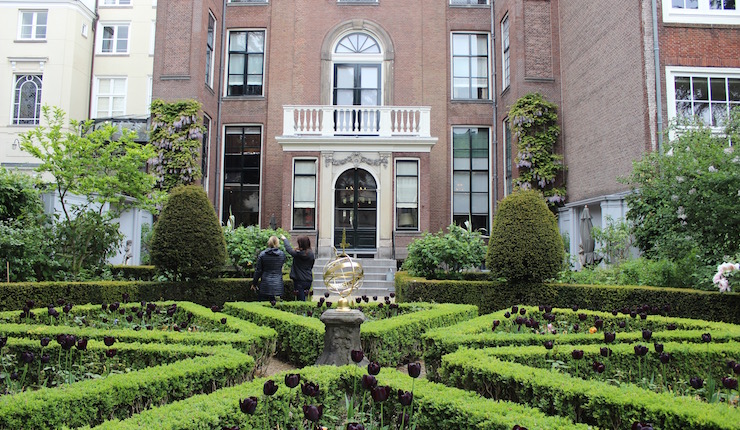 We went on a wonderful Friendship boat tour of the canals. The boat was relatively small – there were probably about 30 passengers on board – and, apart from a small canopy at the front, it was open to the sky. It was a sunny Spring day when we went on the tour and all four of us really enjoyed it. The woman piloting the boat was very quiet initially but when we asked her to she gave us an interesting commentary on what we were seeing. The tour started from the canal next to Anne Frank House. It took about an hour and I’d definitely recommend it. 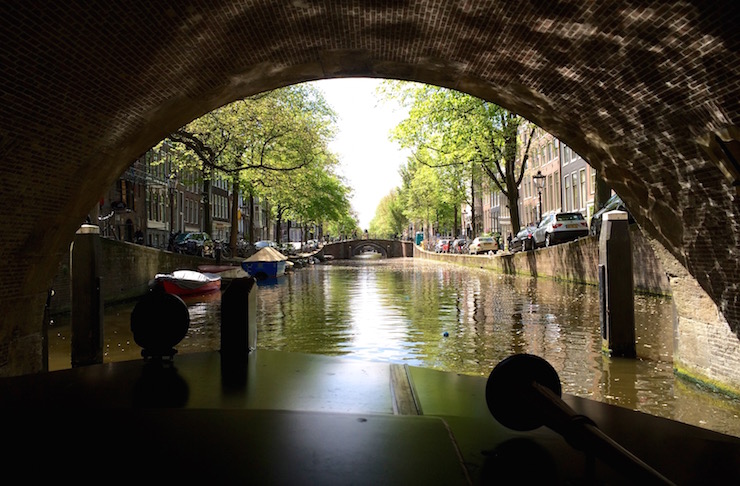 The ‘9 Straatjes’ is a three block square of nine streets in the Jordaan. There are very few cars here and it’s a great area to explore on foot. The houses in the @Nine Streets used to be lived in by servants of the grander canal-front properties but are now home to an eclectic mix of independent shops and cafés. We seemed to gravitate towards this area quite often and you could easily spend a few hours here exploring the shops.

This is a monument to people who are or who have been persecuted for their sexuality. The monument takes the form of a slab of pink granite jutting out in to the canal by the Westerkerk, just along from Anne Frank’s House. I was moved to read that the shape of the monument is based on the pink triangle symbol that gay men and women were made to wear during the German occupation of Amsterdam during WWII. 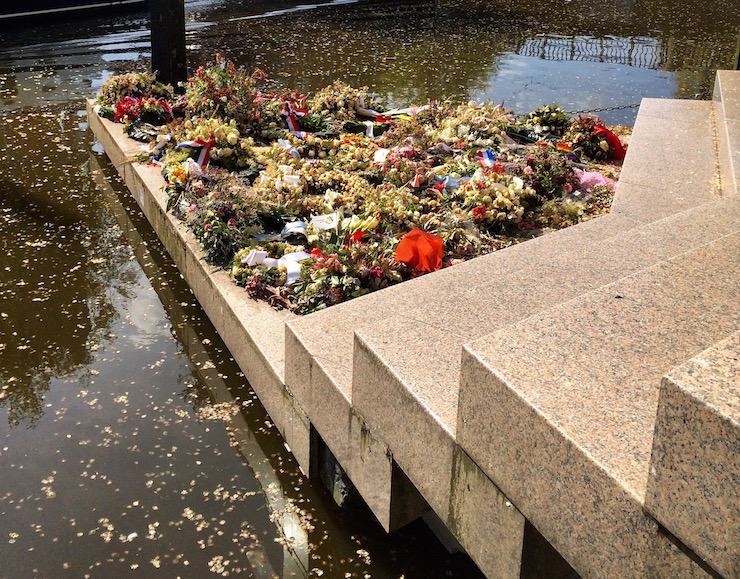 One thing that really struck me about Amsterdam was that everywhere that we ate was excellent. We found some places by reading guidebooks, some by looking at online reviews and some by just coming across them as we were walking. Places such as the funky Wolvenstraat 23 where we had a quick lunch on our last day – we just came across it in the Nine Streets area when we were feeling hungry and it was fantastic. Or De Prins on the Prinsengracht. We found it in our Lonely Planet Amsterdam guidebook and ate a delicious dinner there on our first night. Or Long Pura where we ate marvellous Indonesian food one evening. Either we were lucky or Amsterdam is a great place for eating well.

Amsterdam famously has more bikes than residents and there are people cycling all over the place in the city. It’s easy to hire bikes if you’d like to but we didn’t get around to doing that. Maybe next time!