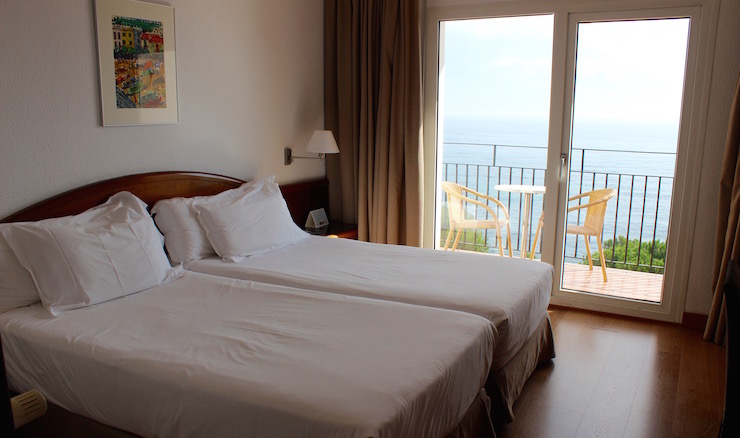 I spent a few days on the Costa Brava in Spain in October with my husband and kids (17 and 12 years old at the time). I’ve already written about our zip wire adventure, the cooking workshop, and the astonishing human towers which we saw in Girona. This post is about the hotel which we stayed at: Park Hotel San Jorge in the coastal resort of Platja D’Aro.

Park Hotel San Jorge is a large, upmarket four-star hotel overlooking the ruggedly beautiful Mediterranean coastline, around 100 kms south of the French border. The hotel is just outside Platja D’Aro, from where there are regular buses to both Girona and Barcelona.

We arrived at the hotel late one night after an evening flight from Gatwick to Barcelona. It took us an hour and a half to drive the 130 kms from the airport to the hotel in our hire car. While I went to check in, my husband went in search of a place to park in the very full car park. There was some confusion between my tired Spanish and the receptionist’s lack of English, but we worked it out. 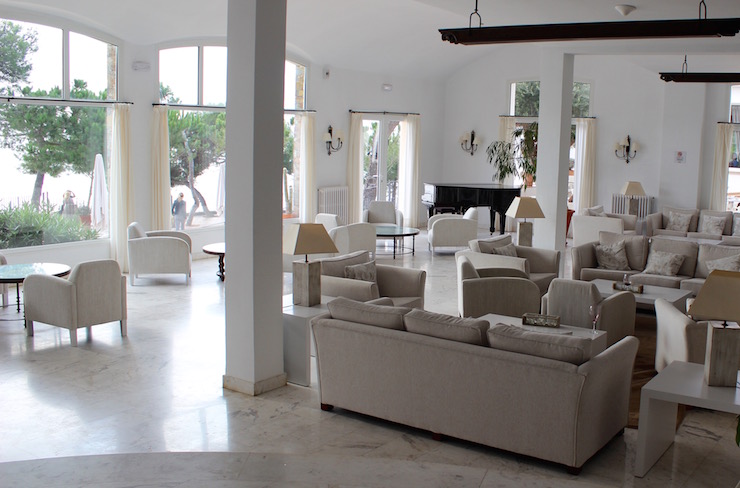 Feeling tired and hungry, we headed up to our interconnecting rooms (numbers 276 and 277) on the second floor. The rooms were modern, clean, comfortable and well-furnished and we were delighted to find some trays of food and drink waiting for us: kindly Anna at the Costa Brava Tourist Board, who had arranged our trip, had asked the hotel to feed us as we were arriving so late. The delicious fruit, bread, cheese and ham was just what we needed.

As it was dark and around midnight I didn’t take photos of the room when we arrived, but I took this video to show you what it was like:

As you can see, our room was spacious and had everything that you’d expect from a four-star hotel, including robes, a safe, a hairdryer, a kettle and free wifi. The interconnecting rooms worked well for us, but there are also family rooms available at the hotel.

When I woke up the next morning I saw that there’s a wonderful view along the coast from our room – number 276 is on the corner of the building and has windows on two sides, as well as a balcony with a table and two chairs. 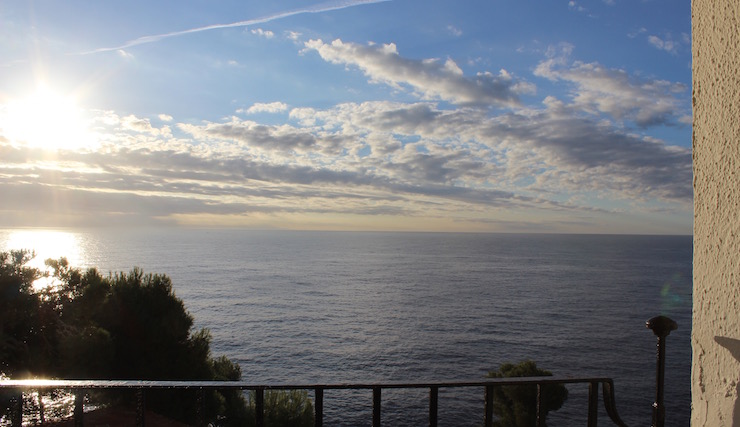 The hotel has a large swimming pool and a children’s pool on a wide terrace overlooking the sea. It wasn’t quite hot enough for us to swim when we were there in late October, but we did see some guests using it who were hardier than us. 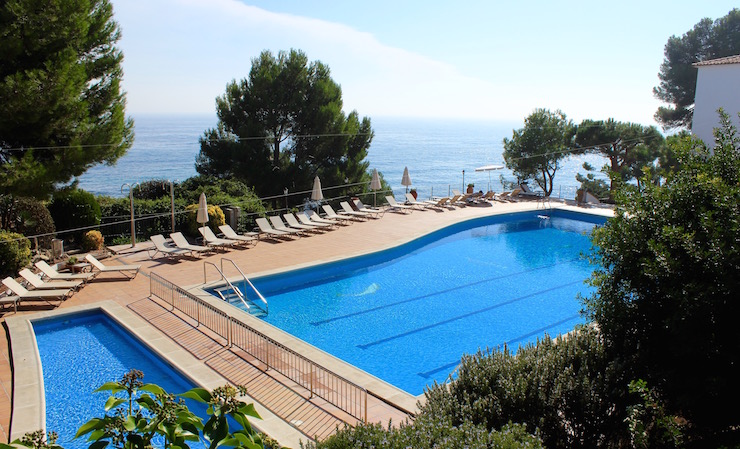 There’s a small spa at the hotel, which my daughter and I tried out one morning. You have to book a time to visit the spa as only eight people at a time can use it. There are massage showers, a steam room, a sauna and a large hydrotherapy pool to enjoy, and I found it all very relaxing. At the end of your hour-long session you have a delightfully refreshing lemon shower. It costs 10 euros for an hour at the spa, which I think is good value. There are also massages and other spa treatments on offer.

There’s a gym at the hotel which my husband used and said was ‘fine’. There’s no charge to use the gym, and children can use it as long as they’re with a parent or carer. There’s a free kids’ club in July and August for three year-olds and above, with Catalan, Spanish, French and English spoken. There are bikes available to hire (by the hour or by the day) at the hotel.

94 steps (I counted them) lead down from the hotel to a beautiful, secluded, sandy beach. A coastal path, the Camí de Ronda, follows the coast from the beach in both directions, and my husband and I got up early one sunny morning to explore it for a short way before breakfast. The Camí de Ronda stretches for 43 kms along the coast and I’d love to come back and walk the whole length of it as the coastline here is just stunning. 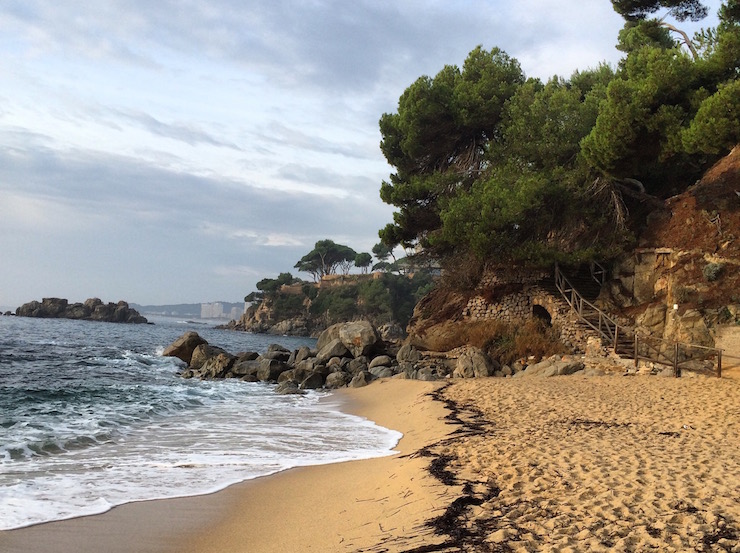 We all enjoyed the buffet breakfast at the hotel every morning. There was the usual range of fruit, pastries, bread, cereals, eggs, ham and cheese on offer as well as the Catalan option of bread and tomatoes. You could eat breakfast in the hotel restaurant or outside on the attractive terrace. We did try the terrace one morning, but moved back inside because there were people smoking outside.

It was clear at breakfast just how busy the hotel was, even though it was the end of October – at times almost every table in the large restaurant was full. I noticed that most of the other guests seemed to be French – I guess because of the hotels’s proximity to the French border. 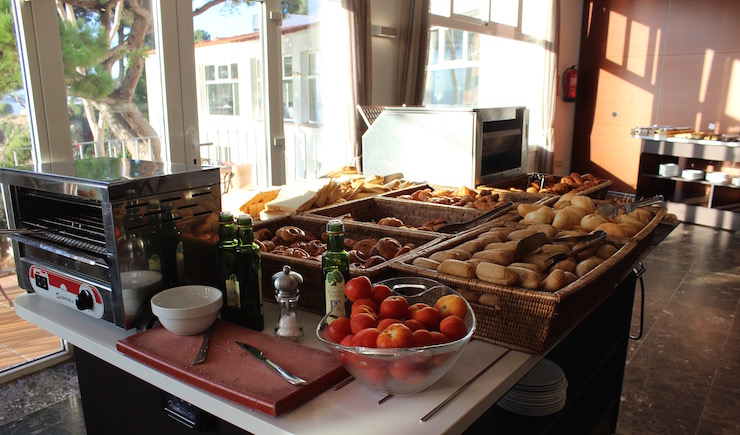 We had dinner at the very posh hotel restaurant one evening. I’m vegetarian and there weren’t many options for me, but my asparagus starter and vegetable tortilla main course were very tasty. The restaurant was good, but I preferred the meals that we ate in local restaurants as the atmosphere was more relaxing.

The family-friendly seaside town of Platja D’Aro is 10 minutes walk away from the hotel. Platja D’Aro offers beach activities and water sports during the summer, as well as shops and restaurants. The town also has a water park which looks great, but was closed when we were there. We didn’t have time to explore Platja D’Aro on our short trip, but fellow blogger Nadine (aka Juggle Mum) stayed in the town for a week and has written this post about her family’s experiences there.

I’d definitely recommend the Park Hotel San Jorge as a great place to stay for families on the Costa Brava coast. The pools and beach are fab and it’s in an excellent location to explore the region and for day trips to Barcelona and Girona. The hotel was full when we stayed there but didn’t feel crowded. The only drawbacks are that the steps to the beach would be a problem with young children or anyone with mobility issues, and that the hotel feels quite impersonal, perhaps because of its size.

My husband says: ‘It’s really good. It’s in a great location and our rooms were a nice size’.

My daughter says: ‘It’s nice. I liked that there were duvets rather than sheets. The spa was nice. I’d have liked it if you could go there whenever you wanted to, but it was good. It was worth 10 euros. Breakfast was good’. 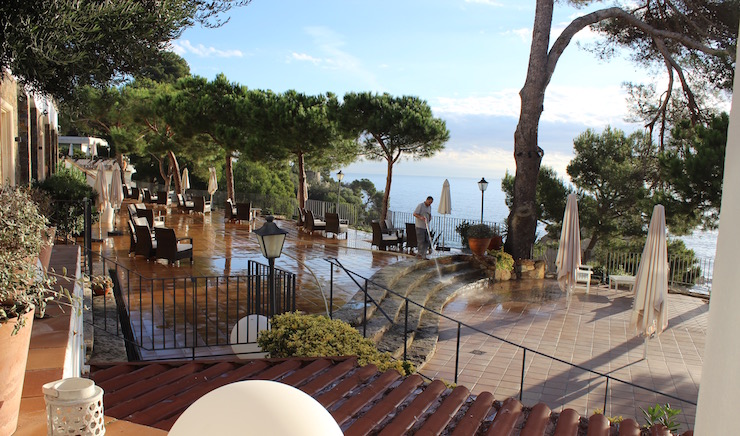 More about the Costa Brava

You can read my other Costa Brava posts (from this trip and a previous trip with my daughter) and Spain posts here. If you’d like to know more about the Costa Brava then go to the official Costa Brava Tourism website, or check out these great guide books:  Costa Brava Marco Polo Travel Guide

Disclosure: This post contains some affiliate links, which means that if you clicked through and booked I may receive a small commission. We were guests of the Costa Brava tourist board on this working press trip. All opinions, images and words are my own, as ever.