Home / Type of trip / City / Visiting the Houses of Parliament 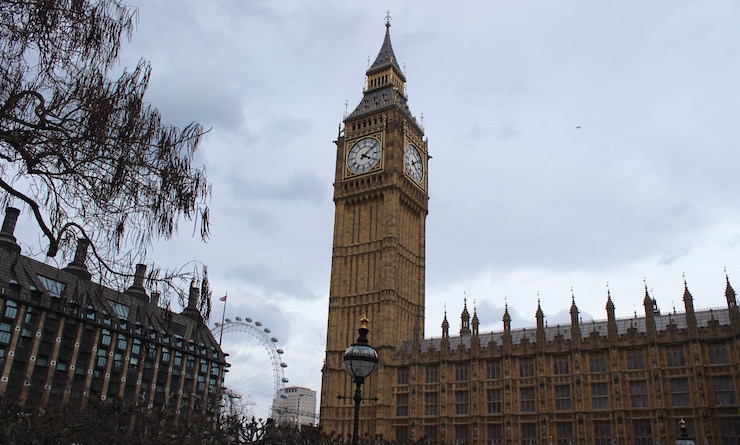 The Palace of Westminster in London has been a royal palace for around 1,000 years, home to Parliament for nearly 500 years, and is a fascinating place to visit.

There are various ways of visiting the Houses of Parliament. If you’re a UK resident you can contact your local MP or a member of the House of Lords and ask them to give you a tour, free of charge. I assume that there’s a long waiting list for that though, so, at certain times, you can also pay to go on a Blue Badge Guide-led tour or on a self-guided audio tour of the iconic building. My husband and I went on a self-guided audio tour one Saturday afternoon, and it was brilliant.

Visitors to the Houses of Parliament have to go through an airport-style security check before going into the building. Once through this check we strolled through the courtyard below Big Ben. I was reminded on the tour that Big Ben is actually the name of the clock tower bell – the official name for the clock tower itself is the Elizabeth Tower. We went into medieval Westminster Hall to collect our audio guides and start the tour.

The audio guides are easy to use, and there are adult and family versions available, both of which follow the same route. The family version of the audio tour is aimed at children aged seven to 12 years old. It’s in the style of a live news broadcast, with time travelling reporters reporting on stories associated with the Houses of Parliament, such as Magna Carta in 1215 and the Gunpowder Plot in 1605. Both the family and the adult audio tours take about an hour – but you can spend longer if you like, starting and stopping the audio guide as you go along. 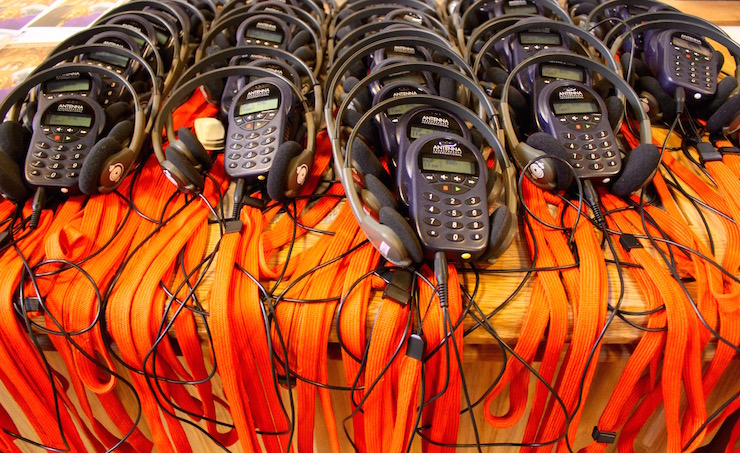 The audio tours start from Westminster Hall, then go through St Stephen’s Hall (site of the sixteenth century House of Commons debating chamber) to Central Lobby and on through both the House of Lords and the House of Commons, taking in various other rooms en route. The tours include the route taken by the Queen at the State Opening of Parliament. For most of the tour you’re not allowed to take any photos, which is a real shame as there are so many beautiful and interesting things to see.

Westminster Hall was completed in 1099 and was designed to impress. It was a place for feasts, entertainment and great state occasions. Westminster Hall and the Jewel Tower are the only parts of the palace which survived a huge fire in 1834, and the hall is still an impressive building today. 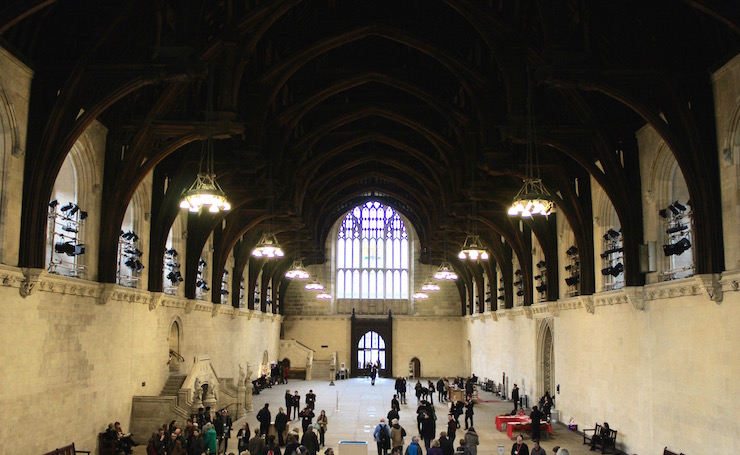 It’s one of the largest undivided medieval spaces in the world and is still used for important ceremonial events. There are plaques on the floor to mark historic moments: I felt very humble to stand on the spot where Nelson Mandela stood to address both Houses of Parliament in 1996. 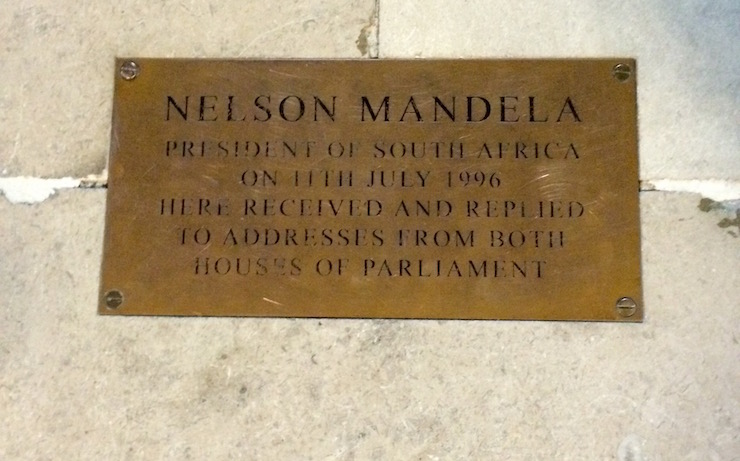 After the 1834 fire, architect Charles Barry won the competition to redesign the Houses of Parliament. Augustus Pugin designed the interiors, and Parliament was rebuilt in its current splendid neo-gothic style, inspired by medieval art. The Palace of Westminster today is the largest neo-gothic building in the world and is full of symbolic detail, both inside and out. 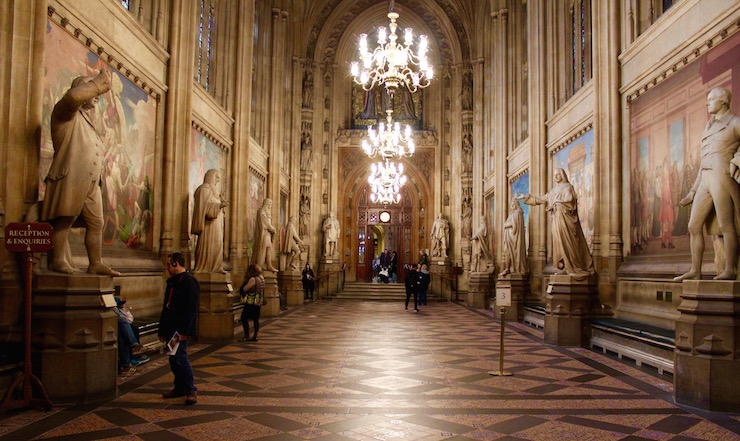 Central Lobby, which often features in political news stories on TV, does actually sit between the two Houses of Parliament. The roof which covers it is said to be the widest stone-vaulted roof in existence. Its interior is packed full of symbolic carvings and mosaics, and it’s a beautiful place. The House of Lords and the House of Parliament are accessed from opposite sides of the lobby.

Both the Commons and the Lords Chambers are much smaller than I’d imagined them to be. In fact, there isn’t actually room for all of the members to sit down at once. It was amazing to be standing in these places, where UK laws are debated and approved, and where  the government’s work is scrutinised. 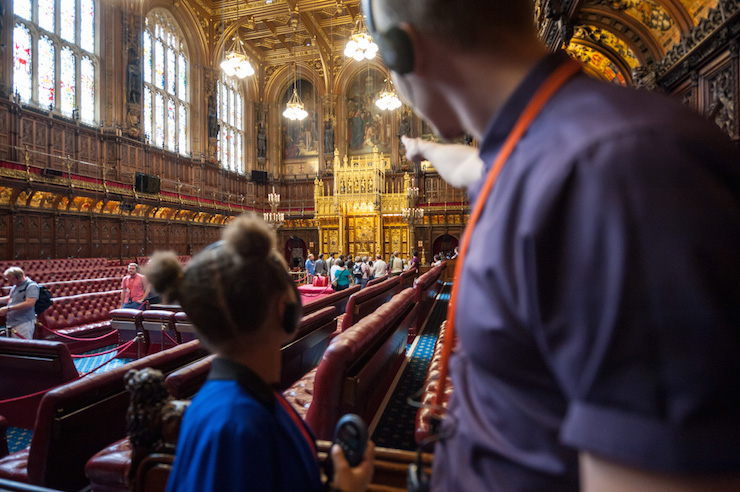 The Commons Chamber was bombed during WWII and a stone archway at its entrance remains in its damaged state, at the suggestion of Churchill, as a reminder of the war for future generations. There’s a statue of Churchill nearby, opposite a statue of Margaret Thatcher. I wondered who chooses which figures end up with a statue of them in these buildings, and whether or not any politicians who are alive today will be remembered in this way. 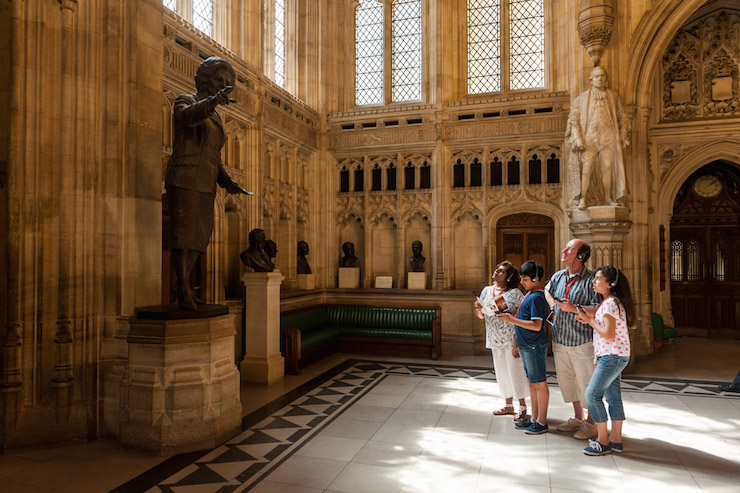 The Royal Gallery is a magnificent room between the Lord’s Chamber and the Robing Room. I can’t remember what the audio guide told me at this point, but the most interesting part of this room for me was the alcove containing an ornate Book of Remembrance for the many peers and their sons who died during WWII. On the floor in front of the book is a rough piece of wood, which came from a jetty used in the D-Day landings. Next to it is a box which is divided into five sections, each of which is full of sand. The sections are labelled Utah, Omaha, Gold, Juno and Sword: the names of the D-Day landing beaches.

The tour ends back at Westminster Hall, where you return your audio guide. There’s a small gift shop and a decent cafe next to the hall.

I found the tour fascinating and would definitely recommend it. There’s a real sense of living history as you walk around the Palace buildings. I think that younger children would be bored on the tour, but that older children and teenagers would find it interesting. My 17 year-old daughter was keen to come along with us, but was otherwise engaged.

My husband says: ‘The tour was very good. I think that it’s one to do without kids, unless they are older, or particularly interested in history.’

For more ideas of things to do in London, check out my London posts here. If you’d like a London guide book I recommend the Lonely Planet London Travel Guide

Disclosure: We were invited to visit the Houses of Parliament free of charge for the purposes of this review. This post contains some affiliate links, which means that if you clicked through and booked I may receive a small commission. All opinions and words are my own, as ever.