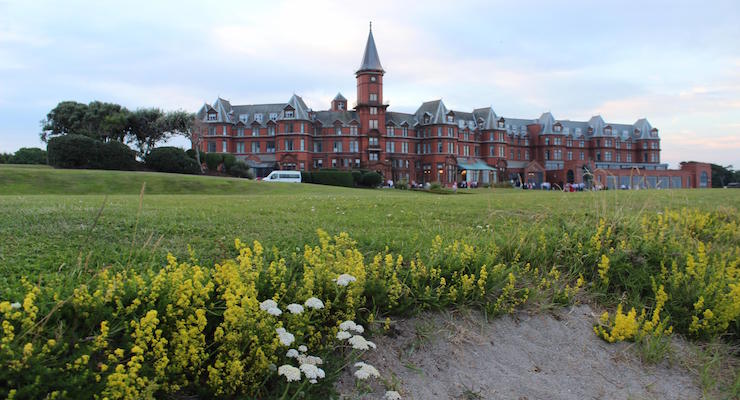 This post is about my summer trip to Northern Ireland with my 17 year-old daughter. We flew from London to Belfast and spent a night at the Culloden Estate and Spa (you can read my review here) before driving to the coastal town of Newcastle by the Mourne Mountains in County Down. After an hour on the road on the hottest day of the year, we negotiated Newcastle’s one-way system to find the Slieve Donard Resort, tucked away at the edge of town.

The Slieve Donard was originally constructed as a Victorian luxury hotel for people to travel to by rail. It’s an imposing gothic building overlooking a wide beach, with views to the Mourne mountains. Our sea view room (number 236, a twin) was ready when we arrived, hot and bothered from our journey. The room had air-conditioning, apparently, but it was still sweltering, and there was no chance of a sea breeze, as the windows couldn’t be opened. It was very comfortable and relaxing apart from the heat though – you can see what it’s like in this short video which I made:

The room was welcoming and well-equipped, and I could never tire of its view of the sea and the mountains. With its high ceiling, big windows and panelled walls, I liked the way that the room reflected the hotel’s Victorian origins, but with modern furnishings and gadgets. 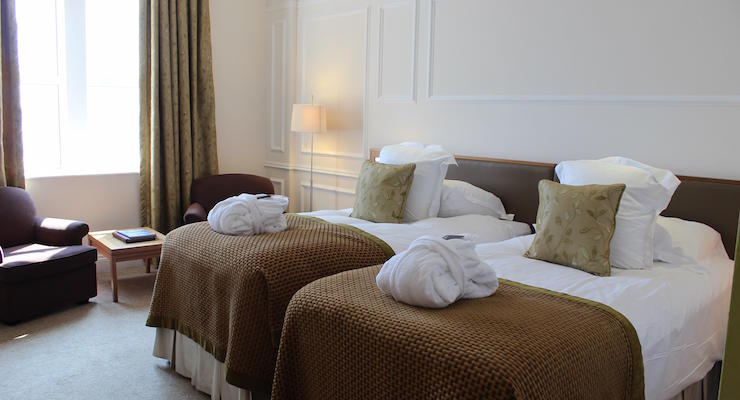 There was a Hastings Hotels signature rubber duck waiting for us in the bathroom, along with supplies of luxurious Espa toiletries.

We needed to cool down, and we were starving, so we decided to leave the air con on in the room and walk into town to find some food. A few minutes later we were in the friendly Savoy Cafe, on Main Road, enjoying roasted vegetable paninis and cold drinks.

Our next stop was the beach for a paddle in the sea. It was low tide and the sea was a long, long way out. We walked across the flat, pebbly beach and left our shoes on the sand at the water’s edge. The sea felt warm on my feet.

Back at the hotel, our room was marginally cooler than when we’d arrived. After a quick cup of tea, we went to spend some time at the spa.

The hotel spa is great. It’s on two floors, and looks out to the sea and the mountains. The ground floor is open to all guests, and the first floor is exclusively for people who are having spa treatments. We went to the ground floor and tried out the sauna, steam room, vitality pool and 20-metre fitness pool before relaxing on some loungers and reading for a while. There’s lots of space at the spa, and we both liked it there, especially the steam room. There’s also a gym and a juice bar on the ground floor. 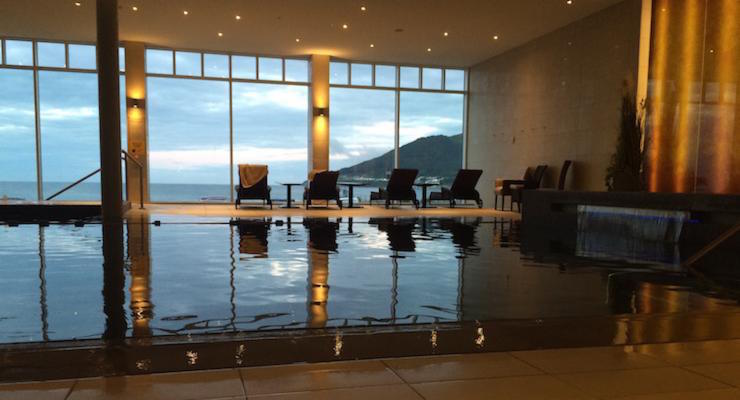 The beds at the Slieve Donard and Culloden hotels are called Cloud beds and deserve a mention. My kids always seem to discuss the comfort (or not) of the beds, pillows and bedding whenever we stay anywhere. With marvellously comfortable mattresses topped with Egyptian cotton bed linen, generous sized duvets and large square pillows, these beds are just the kind that they love. My daughter says that she wants to buy one.

So, I fell asleep in my bed very easily. Only to be woken up at 2am by the noisy occupants next door. It turns out that our bedroom walls weren’t very thick – and I’d left my ear plugs at home.

We had breakfast in the hotel’s Oak Restaurant, a grand, opulent room with views out to sea. It was a buffet breakfast with all of the usual breakfast options, as well as a supply of Bushmills whisky in case you wanted to add some to your porridge (I didn’t). The service was efficient and friendly.

Newcastle is right next to the Mourne Mountains, and you can walk from the hotel into the mountains if you want to. We drove along the scenic Mourne Coastal Route and inland to the beautiful Silent Valley Mountain Park. It’s said that the Silent Valley was the inspiration for C. S. Lewis’s Narnia, and I was keen to see it for myself. The mountains were used as a filming location for the Game of Thrones TV series. It took us about an hour to reach the Silent Valley, with me driving quite slowly and stopping a couple of times to take photos of the rugged scenery. 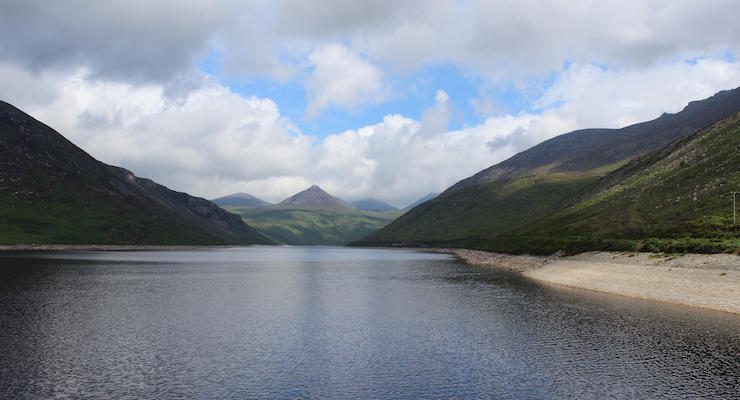 We were very excited when we found The Cake Station, just up the road from the hotel. This independent cafe is a marvel for cake lovers, and we were hard pushed to choose which home-made cakes to try, after a starter of sandwiches. The owner told us that they make all of the cakes themselves, and that the pavlova on the counter was created just 10 minutes earlier. So we had to have a slice of that, and opted for a slice of coffee cake too. We halved each of these, so that we had two half slices of deliciousness each. 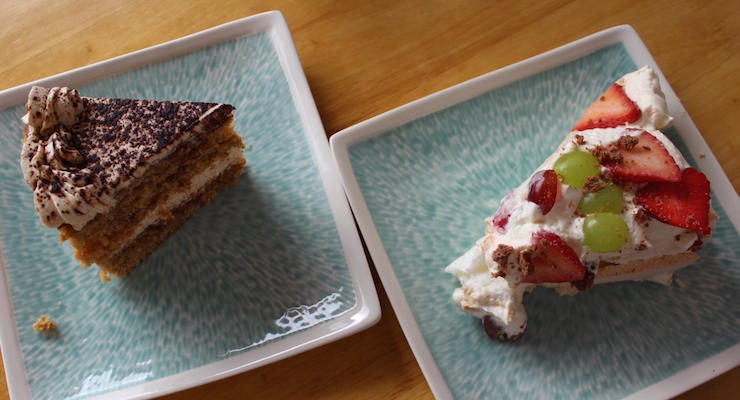 Villa Vinci Italian Restaurant is on Main Street, a five-minute walk from the hotel. It was good that we’d booked a table, because the place was full and staff were turning people away. The staff were very friendly, and the food was very good. My daughter had pizza giardinera and I had pasta arrabbiata. They initially brought me pasta amatriciana with bacon in by mistake, but changed it straight away when I pointed out that I don’t eat meat, and definitely hadn’t ordered it. An apologetic waiter brought us tiramisu and coffee at the end of our meal to say sorry.

Percy French Inn is in the hotel grounds, by the front gate. Our dinner there was fine. I had a superfood salad with salmon, which was better without the salmon. My daughter had a vegetable curry which she says was ‘very nice but quite spicy’. 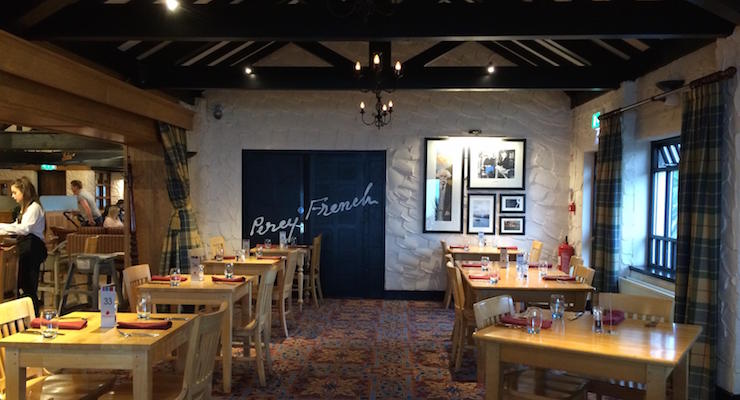 I enjoyed staying at the Slieve Donard, and would definitely recommend it. Our room would have been perfect if it was possible to open the windows. The spa is very good and the location is great.

My daughter says: ‘It’s a very nice hotel. I like that it had lots of healthy stuff for breakfast. The room was a good size. The bathroom was very big in comparison to the size of the room. The shower was very good and the toiletries were really nice. I liked the pool overlooking the beach. The steam room was good but the jacuzzi was too hot. I think it’s a good location if you just want to chill.’ 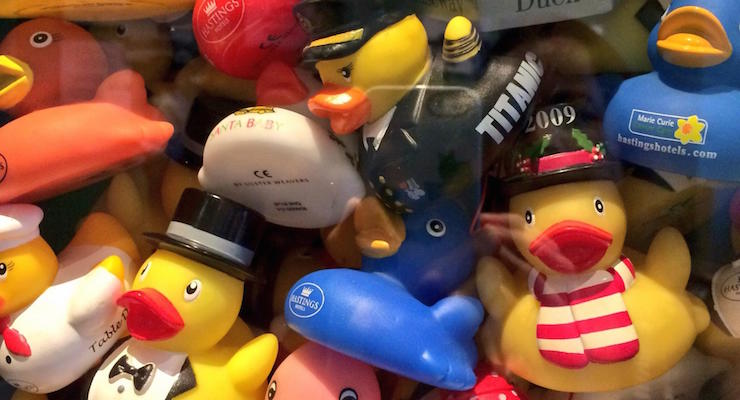 Rooms at the luxury Slieve Donard Resort & Spa, 30 miles South of Belfast, cost from £95.00 per night, including breakfast.

You can read more about our trip to Northern Ireland in these posts:

Disclosure: We were invited to stay at the Slieve Donard for one night for the purposes of this review. This post contains affiliate links, which means that if you clicked through and booked I may receive a small commission. All opinions, images and words are my own, as ever. 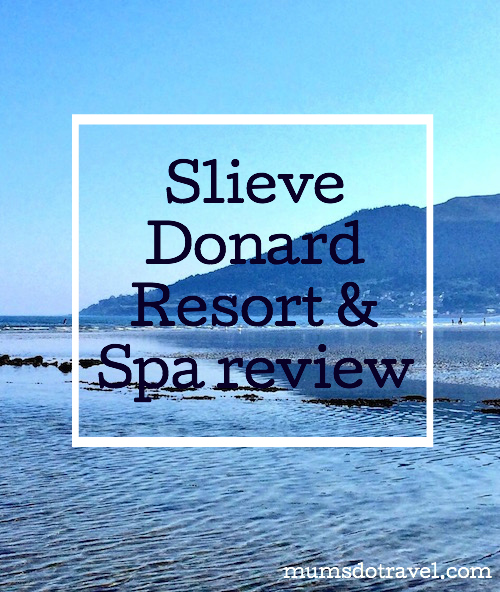