It feels like the UK is more divided than ever by Brexit. I voted to remain in Europe in the 2016 referendum because I believed that it was the right and the best thing to do for our country and for our children’s future (as I explained at the time in my blog post How should I vote in the EU referendum?). I still believe, fervently, that we should stay in the European Union. But I respect the fact that many people, including some who are dear to me, are equally fervently of the opposite view. I don’t want to fall out with them over it, and I definitely don’t want to argue about it with them at Christmas or at other times of celebration. 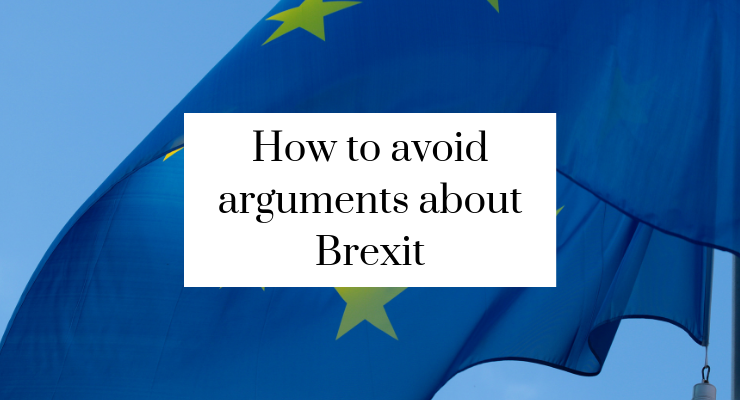 A few days before the referendum I went with my daughter, who was 17 and very unhappy that she was too young to take part in the vote, to see my parents, who are in their seventies. We talked about how we were planning to vote, and why, and my daughter and I did our best to persuade my Daily Telegraph-reading dad to vote Remain. My dad is a kind, intelligent, hard-working man, and he’s as passionate about leaving Europe as I am about remaining. He believes that leaving Europe is the best thing for the country, and he voted in line with that belief – as he had every right to do.

I was devastated by the referendum result. I felt like I didn’t belong in my own country, despite being born here, and I feared for the future. A few days after the referendum result was announced, I again had to drive my daughter to my parents’ house. I was so upset about the result that I said that I’d wait for her outside, as I couldn’t bear to discuss Brexit with my dad. She was also sad about the referendum but, wisely and calmly, she told me that I had to go into the house and that my dad was still my dad, whichever way he voted. And she was spot on. On entering the house, I told my dad that I was too upset to talk about Brexit. When he ignored me and started trying to explain why he’d voted Leave, I left the room. Since then, my dad and I do not discuss Brexit, apart from obliquely when he asks me how our application for Italian citizenship is going (my husband’s Italian – you can read about the progress of our family quest to remain European here).

In December 2017 my healthy, active, beloved dad had a cardiac arrest. He was walking along the road when his heart stopped. Miraculously a lady who was driving past saw him lying on the ground, stopped her car and saved his life with CPR. When he woke up from an induced coma in hospital a few days later he didn’t recognise any of us and couldn’t remember what had happened. Sitting at his bedside I gleefully told him that Brexit had been reversed, and took it as a positive sign that he didn’t believe me. My dad’s memory and strength slowly improved and he came home just in time for Christmas, as pro-Brexit as ever.

I still can’t accept Brexit, because of the dishonesty of the Leave campaign (who can forget the infamous £350 million NHS bus claim, which the head of the UK Statistics Authority has since said was ‘a clear misuse of official statistics’?). I still say that leaving the EU is a huge mistake which will make our country poorer in every way. If there’s another referendum, I will be voting to remain in Europe. But I respect my dad’s (and other people’s) right to hold the opposing view, and I don’t want to talk, or argue about Brexit with him at Christmas or at any other family celebrations. At times like those, I just want to enjoy being with my family and friends, to think about what really matters in life, and to be thankful that my dad survived.

If you want to avoid Brexit arguments with people that you love, here are my tips.

How to avoid Brexit arguments

Do you disagree over Brexit with any of your family and friends? If so, how do you deal with it, and has it affected how you spend time with them?