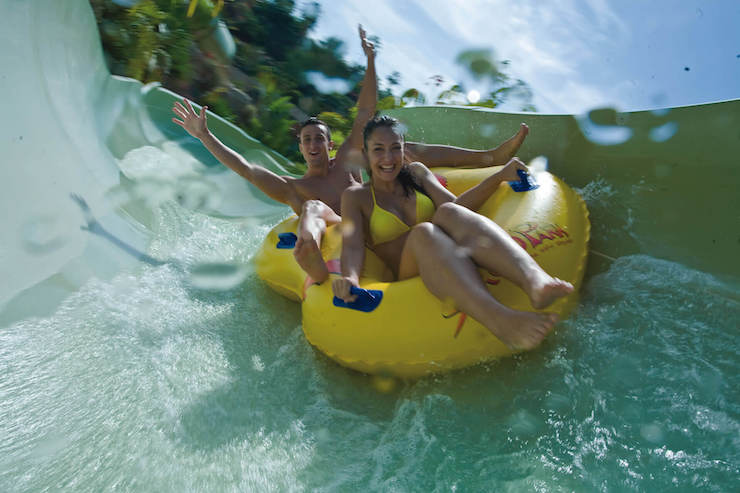 As I’m whooshed from side to side and down the slide, I hold on tightly to the handles beside me and try not to scream. I’m with my friend Kirstie (who blogs at Family Adventure Project) and two strangers, and the inflatable which is carrying us is moving so fast that I feel disorientated.

We splash into the pool at the end of the ride, to be met by a lifeguard, who holds our inflatable so that we can climb down from it. I feel exhilarated and can’t wait to try another water ride – Kirstie’s grinning too.

We’re at Siam Park in Tenerife, the top water park in the world, according to Trip Advisor. The park is spread over 7.5 acres of landscaped gardens and is designed to look like a Thai jungle village. The structure of the slides is hidden behind planting and water features, and the shops, bars and restaurants are housed in Thai-style wooden buildings. 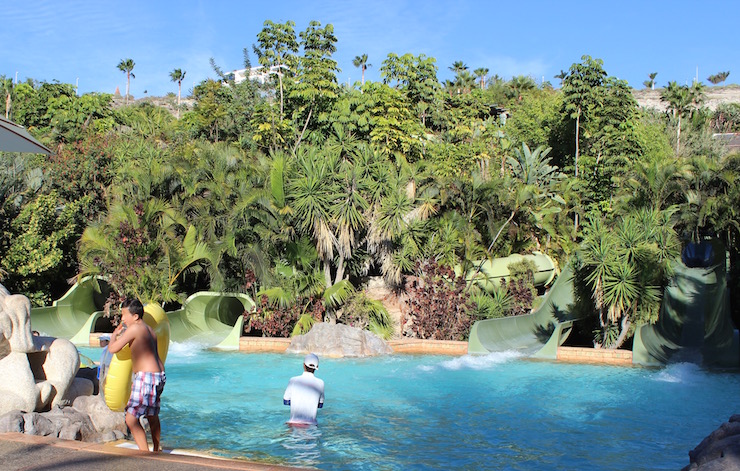 It’s a Saturday afternoon in January and the weather is a comfortable 20°C. Tenerife, and the rest of the Canary Islands, are less than 70 miles from Africa (although they are politically part of Spain) and enjoy a warm climate all year round, making them a popular winter sun destination, especially with Brits. We’re here on a group trip with the British Guild of Travel Writers, and this is a brief visit to the park before flying back to London.

Mai Thai River is the park’s lazy river – and very relaxing it is too. It’s the first thing which Kirstie and I head for once we’ve changed into our swimming costumes and been given lockers and towels by the friendly park staff. It takes us about 40 minutes to float around the river on inflatables. Later I learn that the river is 900 metres long, and is said to be the longest lazy river in the world. For most of the river journey we float gently through lush gardens, but there’s also a fun rapids section, and a transparent tunnel which takes you through an aquarium containing sharks. 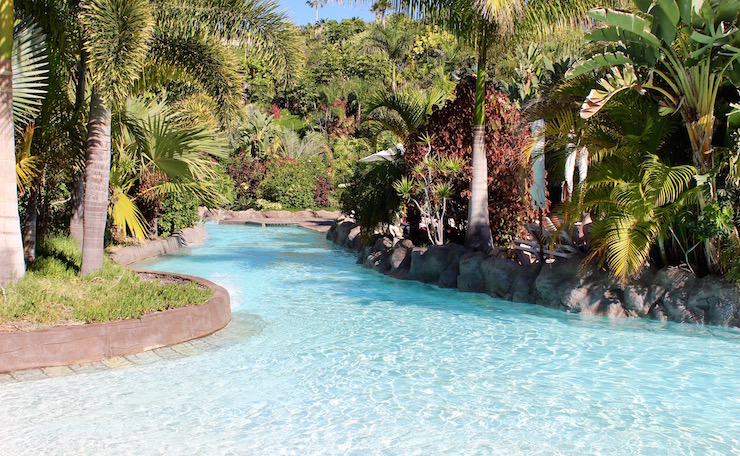 There are water rides to suit all ages and levels of bravery in the park. The Lost City is a huge water play area which is specifically designed for very young children, and I can easily imagine toddlers happily spending all day there. I like the fact that there’s a wide water slide there which babies and toddlers can slide down with someone next to them, to help them to get used to the water slide experience. 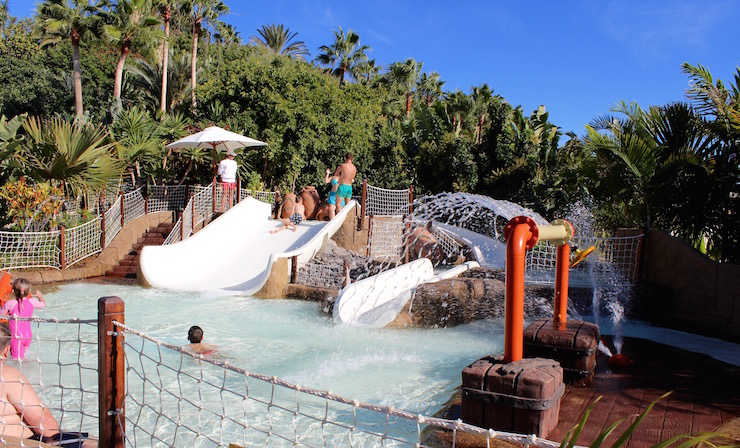 There’s also a bunch of sun loungers and umbrellas facing the play area, as there are at places around the park. 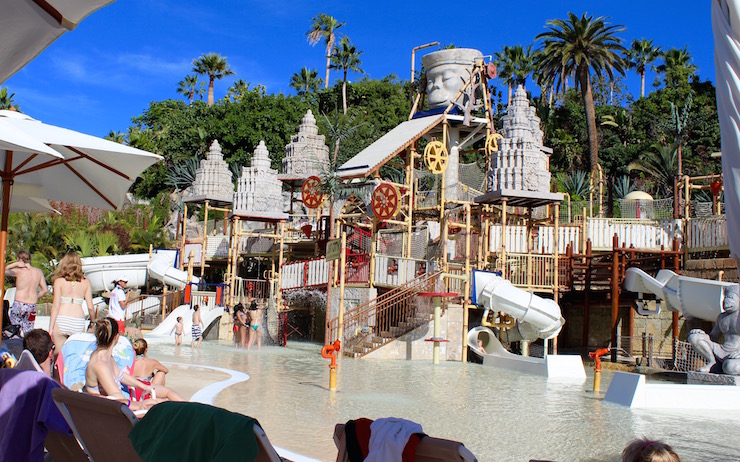 There’s plenty to keep older children, teenagers and adults entertained too. I’m pleased that most of the rides involve sliding down on a single, a double or a four-person inflatable, as I’ve found that I’ve grazed my back a few times going on slides without inflatables at other water parks. We go on as many rides as we can, and all of them are brilliant fun.

The biggest ride in the park is the Tower of Power, and we don’t go anywhere near it. 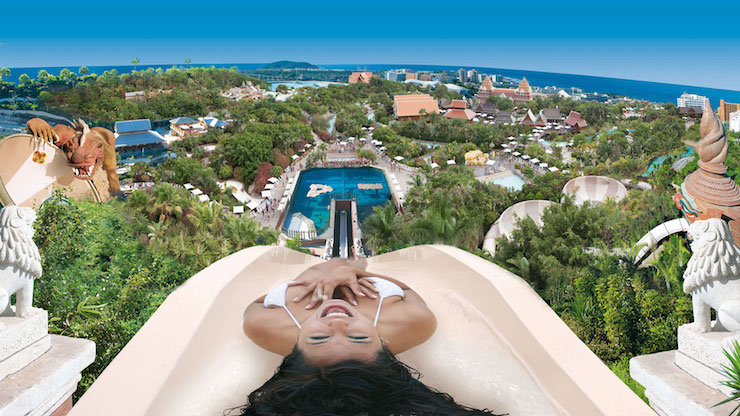 At 28 metres high, it’s a giant water slide which you hurtle down at speeds of up to 80 km/hr, if you so desire. At the end of the drop you shoot through the shark aquarium – but you’d be going too fast to see anything, I reckon.

Siam Beach is closed for renovation when we visit, but park director Christoph Kiessling takes us to see it. It’s an impressive artificial beach which spreads over 9,500 square metres. 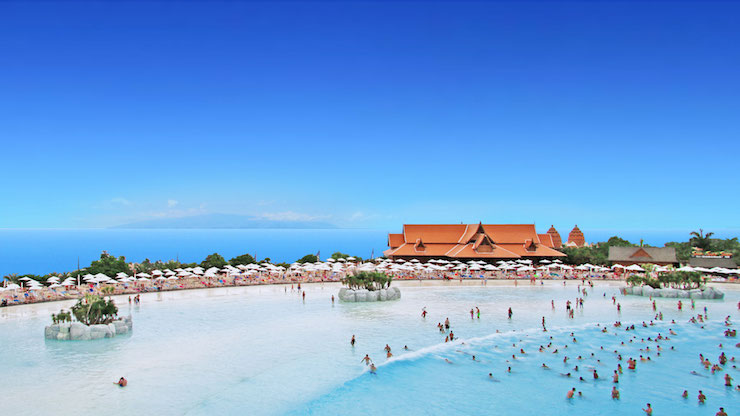 The beach is made of white sand, imported from the Algarve, around a vast heated freshwater pool. At one side of the pool is a wave pool which can create waves of more than three metres high – Christoph tells us that these are the largest artificial waves in the world, and that they’re big enough for surfing, although when the park is open to the public, the waves are set at a much lower height. 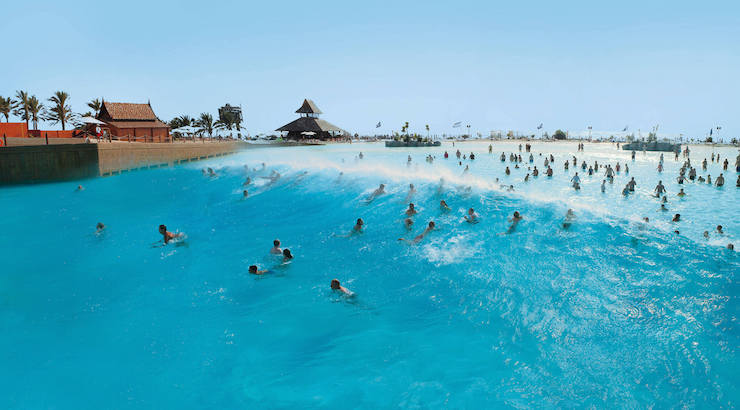 Above the beach area there are some luxurious private cabins for hire. The cabins look very comfortable and secluded, and one even has a jacuzzi, but I can’t imagine my family making much use of them, as I know that we’d spend all of our time on rides or at the beach if we were all here together.

The park has three restaurants and two snack bars. We had lunch at the Thai House, which offers Thai food as well as the usual chips, soft drinks, fruit, pastries and other snacks. I had vegetable spring rolls and rice, and it was good.

I’d like to see Siam Beach when it reopens, as it looks like it will be amazing. I really enjoyed my brief visit to Siam Park and I think that my teenage kids would enjoy it there a lot. You could easily spend a whole day at the park and still want to go back again, as there’s so much to do there. It’s great that there are options for all ages at the park. It’s a beautiful, relaxing environment to spend time in, and I’d definitely recommend it as a fun place for a family day out. 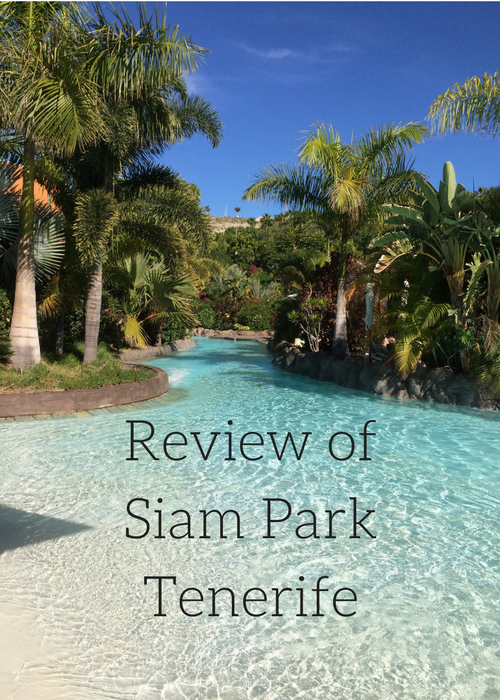 Entrance to Siam Park costs from 34 euros for adults and from 23 euros for children of three to 11 years old. There’s no charge to use the sun loungers or sunshades at the park. There are more expensive tickets on offer to include extras such as Fastpass access, unlimited drinks and snacks and free towels and lockers.

Check out my reviews of other water parks:

To find out more about Tenerife, I recommend the Tenerife Marco Polo Travel Guide

Disclosure: This post contains some affiliate links, which means that if you clicked through and made a purchase I may receive a small commission. All opinions, images and words are my own, as ever. We were guests of Siam Park, along with fellow members of the British Guild of Travel Writers on this trip.