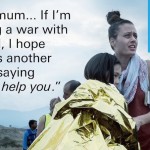 Currently around 30 million children have been forced from their homes because of conflict and violence, according to the United Nations. One in 10 children now live in conflict-affected areas (an estimated 230 million children worldwide), in places like Syria, South Sudan and Yemen. Children are being killed while they’re at school. They’re being forced […]