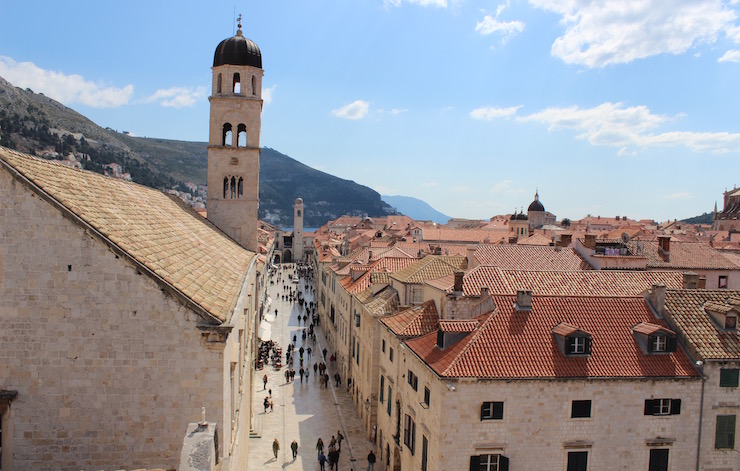 We had an interesting and relaxing family trip to Dubrovnik in Croatia during the Easter holidays. I was with my husband and our children, 16 and 12 years old. We stayed for a week at the luxurious Dubrovnik Sun Gardens Resort (courtesy of James Villas) just along the coast from the ancient city of Dubrovnik. I’ve already written about our very swish apartment, the resort itself, the cool Dubrovnik Off-Road Buggy Safari which we went on and the inappropriate Game of Thrones premiere which we went to. This post is about the other things that we did and the places that we went to in the area.

The old city of Dubrovnik is just gorgeous and we enjoyed exploring it. It’s an ancient walled city on the coast and the main street is paved with pale marble. I saw it for the first time for a few hours last summer when my daughter and I were on a Mediterranean cruise. We both loved Dubrovnik and agreed that we should come back for a family trip.

I’ve spent a lot of time in Italy and Dubrovnik reminds me a little of Venice – without the canals, obviously. It’s a fascinating place just to wander around on foot. The only drawback is that it can become very overcrowded with cruise ship passengers (like us). It’s a good idea to check the cruise ship arrivals schedule on the Dubrovnik Port Authority website so that you can visit the city when there are no cruise ships there if possible. We found that the best place to park in the city is the Public Garaje. Parking there costs 20 krone per hour and it’s a 10-minute walk downhill from there to the main part of town.

The old town of Dubrovnik is entirely surrounded by defensive stone walls. Construction of these walls began in the eighth century and continued over the years, including reconstruction after the Balkans conflict. Walking around these walls is a great way to see the city and its red-tiled roof-tops from above and to look out across the Adriatic and to the nearby islands. It took us quite a while to get around the 2 km walkway as there were so many photos to take along the way. There’s barely any shade once you’re up on the walls so, if it’s hot, make sure that you’re wearing sunscreen and a hat and take some water with you. 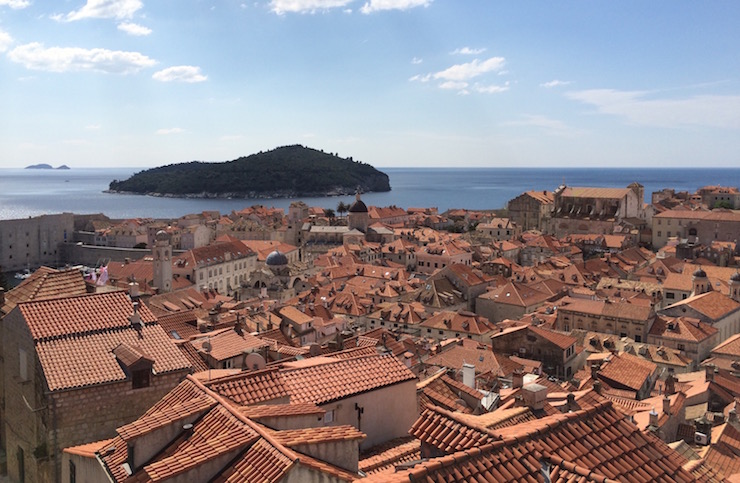 The best ice-cream place that we found in the city was at Poklisar restaurant right by the old harbour. The ice-cream costs 10 kuna per scoop and is delicious. The staff that we met there were friendly and we went there a few times when we needed a break from exploring. Once we even left the kids there with cold drinks at a sheltered table when they’d had enough of sightseeing – we promised the staff that we’d come back to collect them eventually.

Dubrovnik Aquarium is housed on the ground floor of a medieval fortress by the old city harbour. The aquarium is home to aquatic species which are found in the Adriatic. They’re mostly all grey except for the lone sea turtle whose tank looks quite small. We all felt sorry for the creatures in here and I wouldn’t go back there again.

Lokrum island is just 700 metres away from the city of Dubrovnik. There are boats to the island from the harbour every hour (or more frequently in the summer) and we enjoyed the short crossing. Lokrum is a nature reserve and is home to a gang of confident peacocks. We climbed up to the ruined nineteenth century fort to enjoy the views across to the city.

Cost: Around 40 kuna for a return ferry ticket from the city to Lokrum. 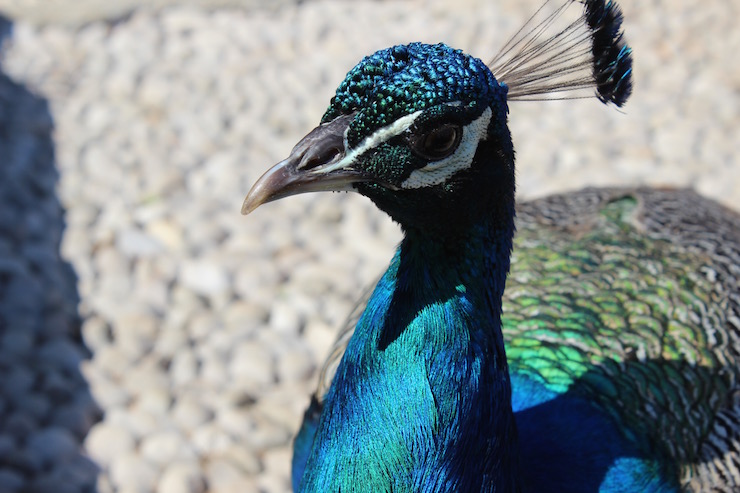 Srd Hill overlooks Dubrovnik and you can take a cable car up to the top of the hill from just outside the city walls. The upper cable car station was rebuilt after the damage it suffered during the Balkan conflict and today it has three smart viewing decks which offer spectacular views of the city, the Adriatic and the nearby islands. There are also a couple of restaurants up there – we left my daughter relaxing in one of them while the rest of us went on an off-road safari in the hills.

Cost: a round trip on the cable car is 108 kuna for adults, 50 kuna for children. 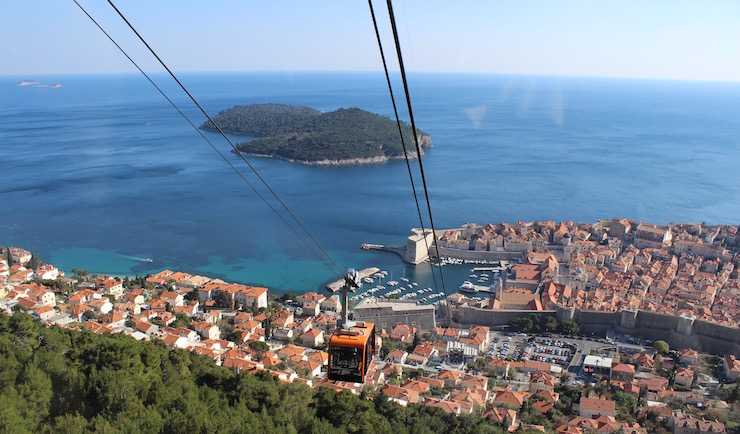 Dubrovnik Buggy Safari is a fun off-road driving experience – you can read my full review here.

About 20 km along the coast from Dubrovnik is the pretty village of Cavtat. A few people had recommended it as a good place to eat and so we headed there one evening. We wandered along the peaceful seafront, dawdled at the playground and then ate an excellent meal on the terrace of Toranj restaurant overlooking the bay. 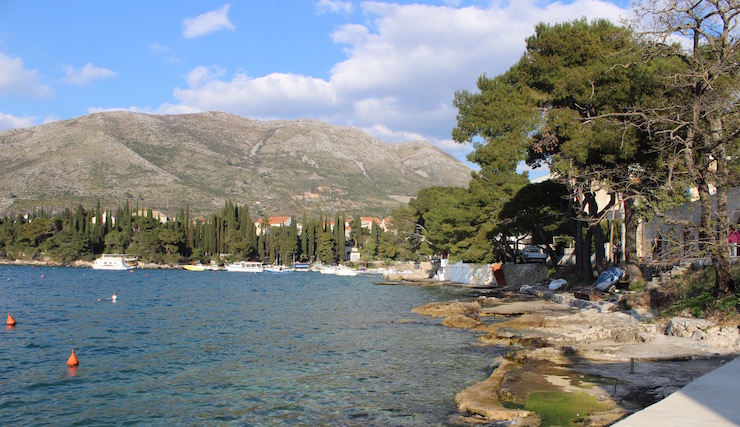 If you’re a Game of Thrones fan (we’re not) then you need to go to Trsteno Arboretum. These historic gardens are along the coast around 18 km North-West of Dubrovnik. The 70-acre arboretum has been used as a filming location for the hit TV series (as has the city of Dubrovnik itself). Amongst the plants and trees is a Renaissance summer house. It’s all quite overgrown and wild but it’s a pretty place to visit.

Ston is an small, medieval town which claims to have the longest defensive stone walls in Europe – they’re 5.5 km long and have 40 towers and five forts. Ston is around 50 km North West  of Dubrovnik and it took us about 30 minutes to drive there. The town was an important salt producer for centuries and you can tour the salt works if you want to see how it is produced. The kids weren’t keen on visiting Ston so they stayed at the hotel while my husband and I went there. As we enjoyed a coffee in the sun on the main square, climbed the city walls and explored the cobbled streets I thought about what our holidays will be like in a few years’ time when the kids are off doing their own thing. 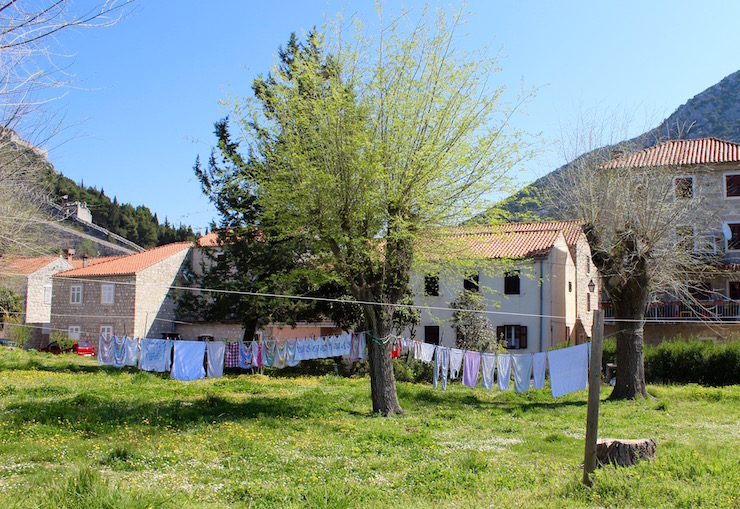 When I mentioned to the lovely Kirstie Pelling of Family Adventure Project that we were going to Dubrovnik she suggested that we should go to Kotor in neighbouring Montenegro for a day trip. Kirstie and her family spent eight weeks exploring the Balkans one summer so she knows the region well.

We drove in our hire car from our resort along the coast down to Kotor, around 100 km away. The drive should have taken us a couple of hours but it took a little longer as it was very slow crossing the border. Once over the border we drove to Herceg Novi and around the Bay of Kotor, which is shaped like a butterfly, until we reached Kotor itself. It was a beautiful drive: the views of the bay and the mountains as we drove along were spectacular and we stopped a couple of times to take photos. 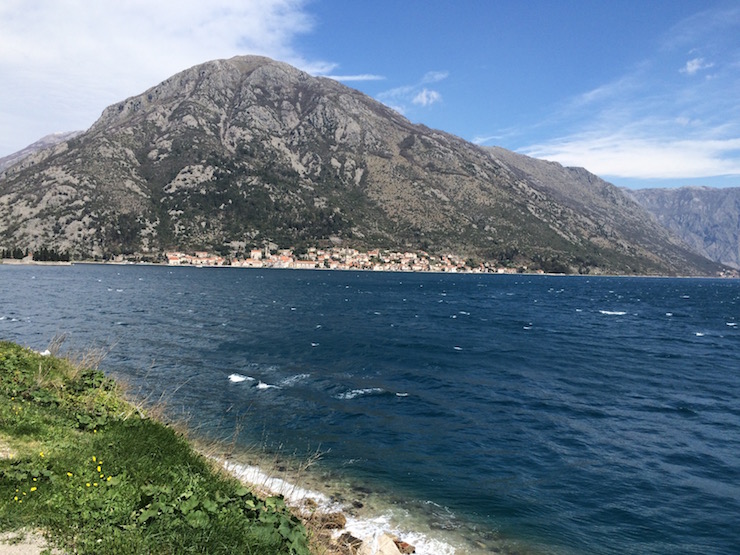 Kotor itself is an ancient walled town and is a UNESCO World Heritage Site. We parked the car opposite the city gate and then went in to find some lunch. We wandered through the pretty, narrow streets until we came across a restaurant called Bocalibre in a quiet square. Bocalibre has a wood-fired pizza oven and we ate some delicious pizza at a table outside. 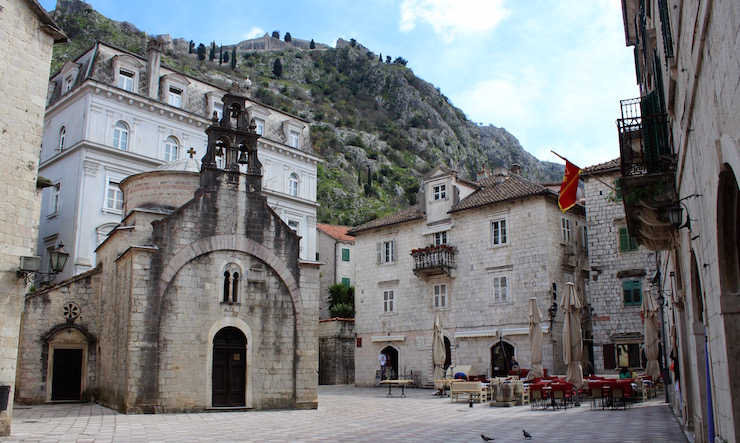 On our drive back around the bay we stopped off briefly to take photos at a pretty town called Perast – another of Kirstie’s recommendations.

All four of us really enjoyed our week in Dubrovnik. It’s a beautiful place where there are many interesting things to see and do. We’d definitely recommend it as a family holiday destination.

If you’ve been to Dubrovnik, what did you think of it? If you haven’t been there, is it the kind of place that you’d like to visit?

Disclosure: James Villas provided our accommodation at Dubrovnik Sun Gardens Resort. The Dubrovnik Tourist Office arranged for our entry to Trsteno Arboretum, the City Walls, and the boat crossing to Lokrum. All opinions are my own.