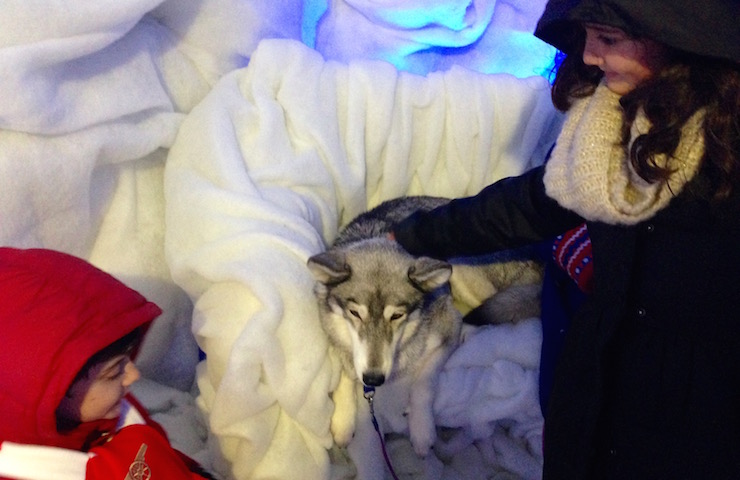 This is a guest post by broadcast journalist and blogger Sharmeen Ziauddin. Sharmeen blogs at BritPakGirl and lives in Surrey with her husband and their three young children. You can find her tweeting @sharm33n

“On a Saturday in late November I took my family to Drusillas Park, where Winter Wonderland is open for the festive season. My children (aged nine, seven and three years old), like most children, really love animals and couldn’t wait to go. Despite the terrible weather we set off from our home in Surrey to Drusillas.

Drusillas Park is a ninety year old zoo in East Sussex with a lot more to offer than animals. There is a huge adventure playground including rope swings and super slides, Thomas the Tank Engine train ride and Hello Kitty Secret Garden.

Drusillas has a whole host of animals from lemurs to snakes to penguins. By far the best attraction are the monkeys because of the great variety of species which I’ve not seen at other zoos. The  pink bottomed Sulawesi Crested Macaque family was especially memorable as we were lucky enough to see the mother feeding her baby. Awwwwww! Other monkeys include the playful dusky langurs and the extremely cute gibbons. The monkeys are fascinating to watch and it’s amazing to observe them so closely. 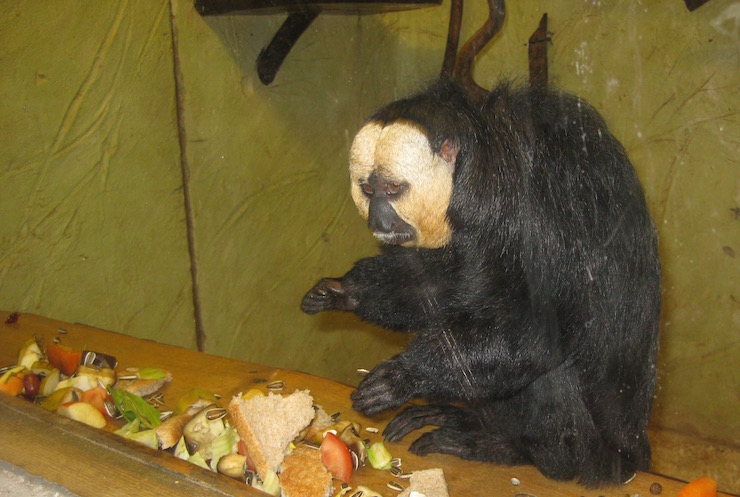 Scattered around the zoo are lots of interesting factual information displays and buttons to press. Sometimes the educational part at zoos can be quite boring but Drusillas managed to make things bright and colourful – like the decibel telephone box, where you go inside and scream and it records how loud you are compared to other animals. This was really good fun and surprisingly my son was louder than my daughters which none of us expected! 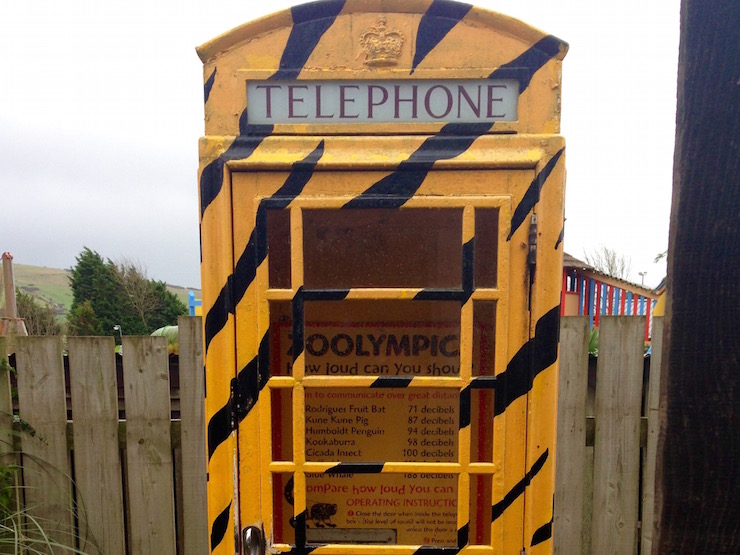 There are many types of animals to observe, some of the most interesting being the red panda, flamingos and the love birds. There is also a bat room, lorikeet area and a farm too. I really liked the owls as they were so huge and spooky compared to ones I’ve seen before.

My son grabbed an Animal Spotter Book (a booklet with certain animals you need to spot and then stamp when spotted) and was going round stamping it when he saw the animals that were mentioned in the booklet – stamps are in every section so you don’t have to carry a pen around.

‘Hug a Husky’ is a special feature for the winter season which is where you can go and stroke a gorgeous husky. My seven year old daughter who’s scared of dogs even had a stroke as the huskies were incredibly docile and friendly.

The Hello Kitty Secret Garden has rides which are for younger children, one having a minimum height of 90cm, but my three year old was able to go on everything. There is a car ride, a small teacup ride and a ride which I can only describe as an up an down thing, which they went on twice. As there are no queues they could have gone on a lot more, but as my husband and I didn’t want to get soaked we dragged them off sooner than they wanted! 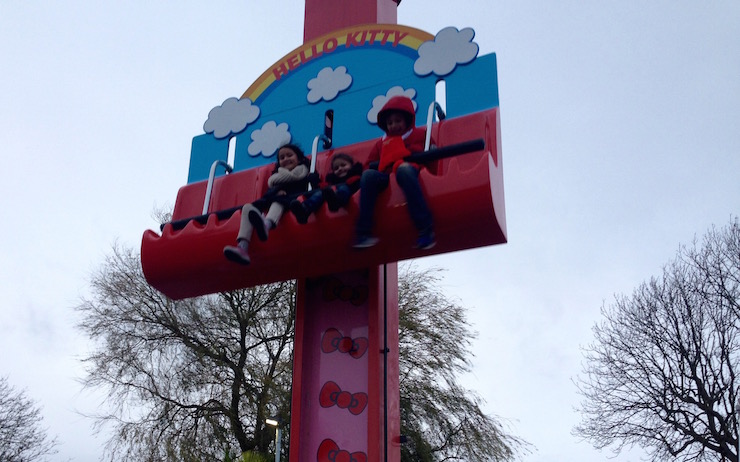 The Winter Wonderland is fairly small but looks great after dark. You can meet Father Christmas and get a present from him for an additional £10 per child. The parade takes place at 4.30 and involves some illuminations and lots of Christmas songs. 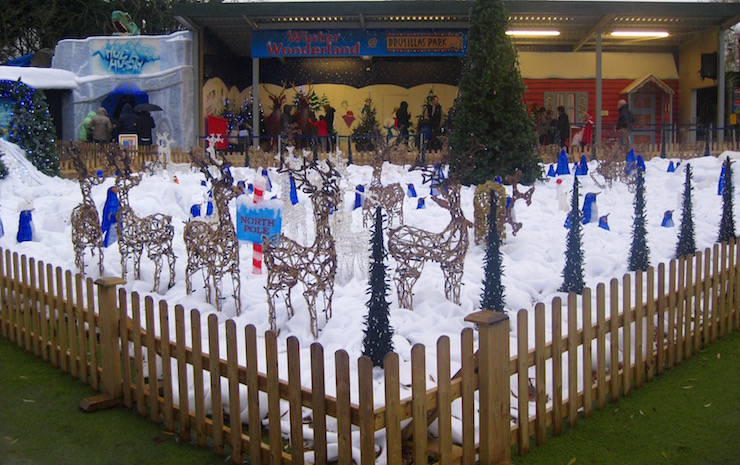 There are four cafe/restaurants serving hot and cold food, including a Starbucks outlet which is great for ensuring adult’s sanity. We shared a jacket potato, some veggie burgers and chips which were all tasty. The good thing is the food and gift shop prices aren’t extortionate (as they are at Merlin attractions), so the kids were allowed to choose a cuddly toy to take home at the end of the day.

The children had a really good day out and enjoyed learning about different types of animals. My son’s favourite part was trying to spot all the animals from the booklet and stamping it when he found them. My seven year old daughter enjoyed the playground with its ropes and slides, despite the rain! And my three year old enjoyed everything but above all was most excited about riding in Thomas The Tank Engine. The whole park can be done in about four hours which leaves you with a free evening where you’re not completely exhausted. Whilst it may not be like a theme park, it’s certainly more than just a zoo and is well suited for children under 10. 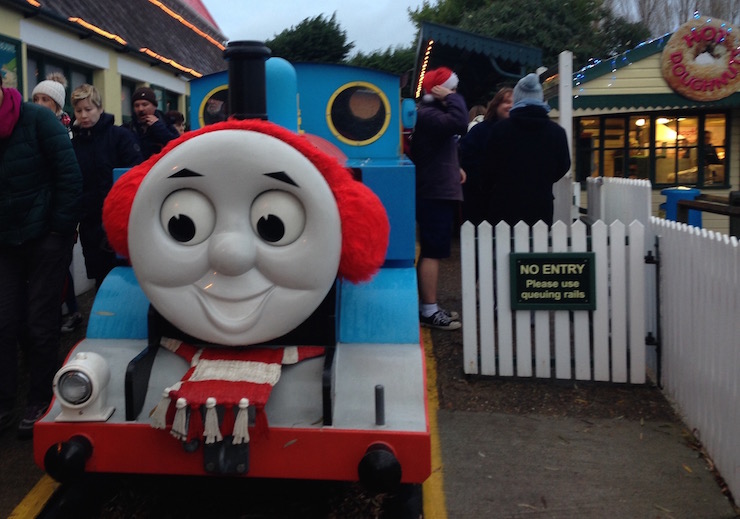 Prices at Drusillas Park vary according to peak and off peak times, but if you’re visiting in school holidays or on weekends, which are peak times, it costs £18 per adult/child and under twos go free.

The park is open from 10-5pm throughout the year, every day (except Christmas Eve, Christmas Day and Boxing Day), and the car park (which is free) locks at 5.15pm.

You can book tickets here.

Drusillas is in Alfriston, East Sussex, BN26 5QS. It’s just off the A27, about 7 miles from Eastbourne and 12 miles from Brighton. The park is located very near the coast so it makes a good place to visit if you’re heading to any of the nearby beaches for the weekend, such as Brighton or Newhaven.”

Disclosure: Sharmeen and her family were guests at Drusillas for the purposes of this review.

For more ideas for family days out, check out my monthly roundups of great things to do in London with kids.