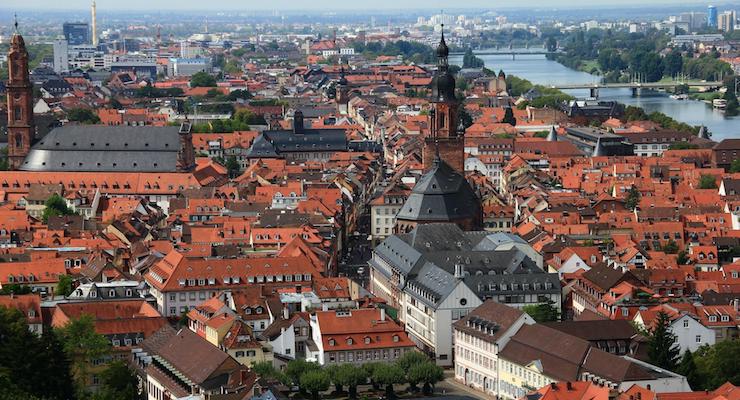 This is a guest post by Jane Welton, about a summer family trip to Heidelberg, Germany. Jane is a freelance writer and translator who lives in Surrey with her husband and 12 year-old daughter. Jane has spent a lot of time in other European countries and is bringing her daughter up speaking French and German as well as English. She’s also worked as a teacher of deaf children so she’s interested in sign language as well. Jane blogs at Multilingual Mum.

“Heidelberg is a lovely medieval town on the River Neckar. Snuggled in a steep valley in the middle of the Odenwald forest, it’s one of Germany’s warmest regions. It’s a good choice for a last-minute break – BA run several flights a day from Heathrow to Frankfurt, so short-notice availability is good. After a short flight of about one hour 15 minutes it’s only 50 minutes from Frankfurt Airport to Heidelberg by train, changing in Mannheim. Last-minute self-catering accommodation is difficult to find, so we stayed in the pleasant Hotel Heidelberg in the suburb of Kirchheim. We had a warm welcome and a comfortable room there.

The Old Town was founded in 1196. The university is the oldest in Germany and its 28,000 students give the Altstadt its lively character. The Hauptstrasse, or main street, is a mile long and Europe’s longest pedestrian shopping street. There are some unusual shops here: My Muesli, is a shop which sells your own selected mix of gift-wrapped muesli!

We came across several marketplaces with cafes and cobblestones, and adjoining narrow streets to investigate. The whole area is traffic-free, which is so relaxing. It’s great for families with small children as there is plenty of space and you don’t need to worry about them straying onto the road.

The Marktplatz is in the centre of the Altstadt, a peaceful place with fountains, grand period houses and people sitting outside the cafes chatting and enjoying their drinks and food. Around this market place are the Heiliggeistkirche, or Church of the Holy Spirit (early 14th century), the Rathaus or Town Hall, and various other late Gothic buildings.

Near to the Marktplatz, and interesting for secondary-aged kids and adults who like political history, is the Friedrich Ebert Museum, at Pfaffengasse 18. Ebert (1871–1925) was brought up in this house. He was leader of the Social Democratic Party (SPD) and the first democratically elected President of Germany. Entry is free. 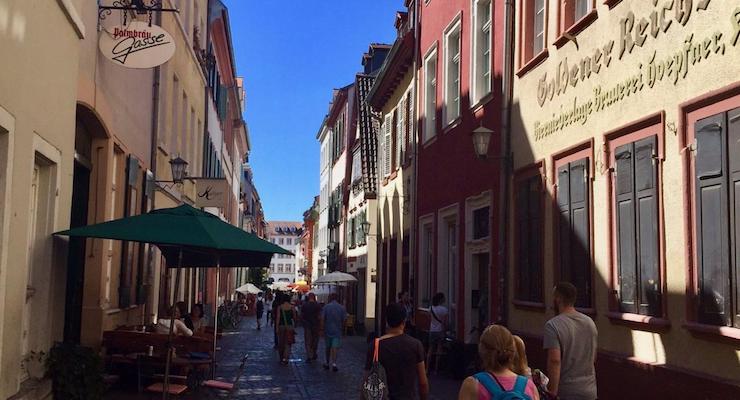 The Alte Bruecke and River Neckar

The Old Bridge was built in 1788. On the city side of the bridge is the medieval Brueckentor or Bridge Gate, part of the former city wall. Various boat trips leave from this area.

After dark we bought ice-cream from the Italian ice-cream shop on Steingasse and walked through the gate and onto the bridge.  There is no shortage of Italian ice-cream parlours in Heidelberg, and all of them are open in the evenings. There’s a great view from the bridge over the Neckar and you can’t help wondering what’s around the next bend. 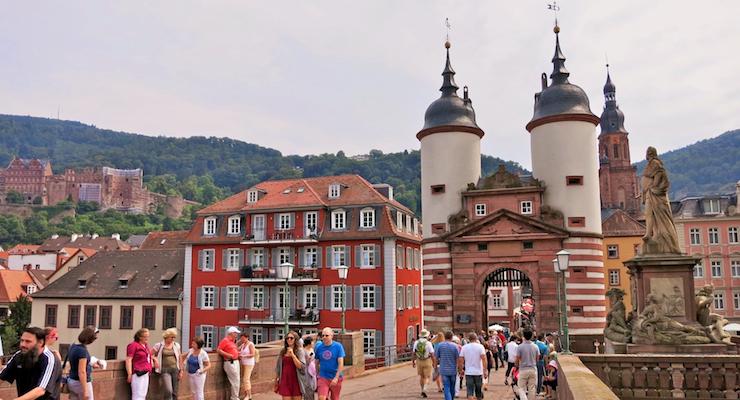 The zoo is on the other (Neuenheim) side of the river and you can get there easily, by bus 31 or 32 from the Bismarkplatz.  The entrance fee of 10,20 euros for adults and 5,10 euros for kids is good value as there is a wide range of animals including elephants, big cats, bears, gorillas and orang-utans. My favourite was the adorable five month old orang-utan Berani, who was doing some nifty climbing.  There’s a pet village and a large playground.

The imposing “Schloss”(castle) is set against the forest on the Koenigstuhl hill. We bought Bergbahn (funicular railway) tickets to take us up from the Kornmarkt to the top of the Koenigstuhl for lovely views of the Neckar valley and signposted walks in the woods. The price of seven euros for adults and four euros for children included entrance to the castle on the way up or down.

The Schloss started off as a smaller defensive castle (“Burg” in German) for the local rulers around 1225. At the end of the 14th Century the local sovereign Ruprecht 1, founder of the University of Heidelberg, had it expanded into a “Schloss”, a castle residence. You can see a mixture of renaissance styles in the grand facades around the central courtyard. In the 17th and 18th centuries the castle was repeatedly attacked by the French, caught fire after two lightning strikes and was left in ruins. The locals helped themselves to stones from the ruins to build their own houses in the town! In the 19th Century Heidelberg Castle attracted many romantic poets and artists (including William Turner) who loved the combination of ruins and nature, and the brooding atmosphere. The huge terraces offer beautiful views over the city and Neckar River.  Entry to the castle courtyard is free after 6pm.

As for the castle itself, I loved the Fasskeller, or Barrel Cellar. Part of the cellar is a café, and a drink and a slice of Himbeerkuchen mit Schlagsahne – fresh raspberry cake with whipped cream – gave us enough energy for another couple of hours’ exploring. The gigantic wine barrel in this room was constructed in 1750 and held 200,000 litres of wine, which used to be pumped via a pipe into the adjacent banqueting hall. It’s the largest wine barrel in the world, made from 130 oak trees and seven metres wide. We climbed up the wooden staircase to the side of the barrel and walked about on the top of it, where the privileged guests at the castle banquets used to dance. 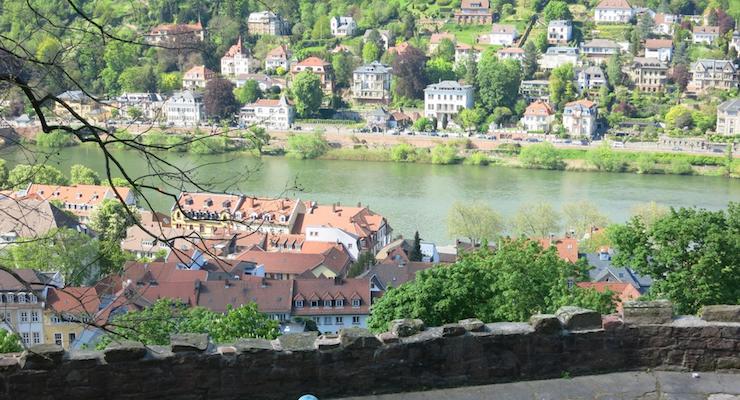 The Philosophers’ Way and the Bismarck Tower

This lovely walk runs along the side of the Heiligenberg (saints’ mountain), parallel to the Altstadt on the other side of the Neckar. The views from the path are beautiful.  It’s a relic from the Romantic Era when poets and thinkers would stroll along the path and enjoy the views. So here’s your chance to be a philosopher!

The whole walk is accessible by pram/buggy, but there is a steep incline at the beginning and the end. To start the walk, cross over the Theodor-Heuss-Bruecke; from the Brueckenstrasse take the second turning on the right signposted “Philosophenweg”. The most picturesque part of the path is about half way along, when you come to the “Philosophengaertchen” (philosophers’ little garden), with its sub-tropical plants and trees such as palm, lemon, almond and fig. Further along there are some small vineyards to the right, between the path and the river.

If you leave the path at this point and follow the overgrown path leading up the hill from the garden, you’ll come across a massive stone observation tower. It’s the “Bismarcksaeule”, or Bismarck pillar, a memorial to Germany’s first chancellor, Otto von Bismarck.

Bismarck died in 1898 and the monument was built in 1900. Climbing the unlit stone steps inside was an eerie experience and a contrast to the sunny walk, but echo-y and fun. Small children would need close supervision inside this tower.  At the top we had a great view for miles.  Above our heads was a metal holder for a fire cauldron, as the tower was intended to be a beacon.

Back on the Philosophenweg, continue until you’re opposite the Alte Bruecke in the distance. You could stop off at the seesaw and/or the refreshment kiosk. The “Schlangenweg” or snake path signposted to your right takes you back down to the river – back to 2017!”

If you’d like to know more about exploring Germany, I recommend the Lonely Planet Germany Travel Guide. For help with German, check out my free language printable, 10 useful things to say in German.

If you’ve been to Heidelberg, do you have any tips to add? If you haven’t been, is it somewhere which appeals to you for a trip? 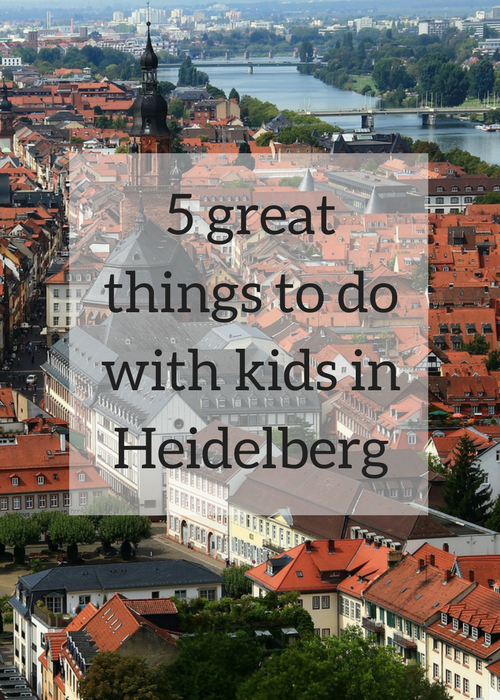 Disclosure: This post contains affiliate links, which means that if you clicked through and booked I may receive a small commission. All opinions, images and words are Jane’s or mine, as ever.