Budapest sits on more than 120 thermal springs, so the city is home to many different bath houses. Thanks to this, the Hungarian capital has been called the spa centre of Europe – the springs and their ‘healing properties’ have been used for centuries.

The first summer I went to Budapest, we’d planned to visit one of the many thermal baths that the city has to offer, but I threw a spanner in the works by falling off a horse and breaking my arm just days before we flew out. Sadly, arm casts and water don’t mix well, so we couldn’t go.

Last year I was visiting the amazing city again and just knew I had to visit one of the baths. I had such a good day there that when I went to Budapest again, this  summer, I decided to try out a different baths, to see how they compared.

The baths are all similar, with various indoor rooms filled with thermal pools of differing temperatures – from icy pools to very warm ones, along with saunas and steam rooms. Some have outdoor pools and seating areas, and many also offer massages and other treatments. They all also have lockers or cabins included in the ticket price, so you have a place to safely leave all your things.

If you plan on visiting one of Budapest’s baths, keep in mind that all baths require swimming costumes, and you’ll need a swimming cap if you want to swim lengths in the pools. Definitely also be sure to bring flip flops for walking around the baths and outside areas. Most baths have food stalls, cafes or restaurants, so you’re more than able to spend the whole day there.

Before you visit a bath house, make sure you check what day you want to go – although many are open to both men and women, some have specific male- or female-only days. 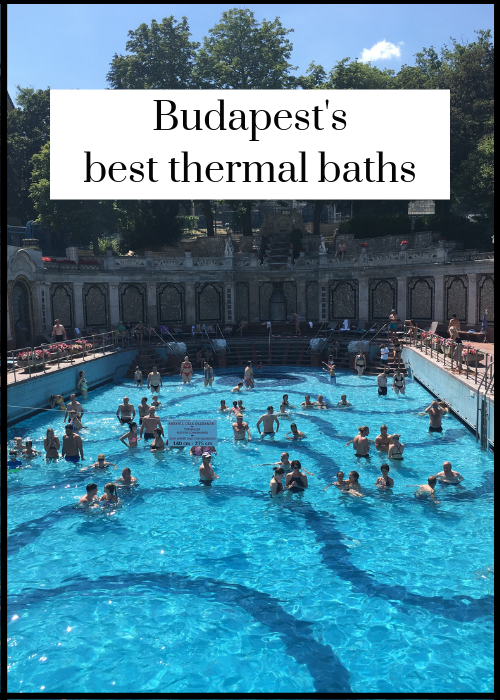 Széchenyi Baths are the largest spa complex in Europe, housed in City Park, which is a lovely place to visit in its own right. The Baths are massive, with 15 thermal baths as well as saunas, steam rooms and three large outside swimming pools, one of which even has a whirlpool in the middle. The building (a neo-Baroque palace) is gorgeous and there’s a large outdoor area filled with sun loungers.

Gellért Baths are sometimes called Budapest’s most beautiful baths: in an Art Nouveau style, with mosaics, stained glass windows and columns. We stayed in next-door Gellért Hotel, which meant we got discounted entry to the baths. Like Széchenyi, there is a large outside area with pools (and a wave machine) at the Gellért Baths, which is lovely in the summertime. Inside Gellért Baths is a series of pools of varying temperatures, as well as saunas and steam rooms.

Rudas Baths date back to the 16th century (but were renovated in 2017), when Budapest was under Turkish control, and as such they are in the style of Turkish baths. A central octagonal pool lies under a domed roof that is decorated with circles of stained glass, letting in colourful beams of light. As well as various other pools, saunas and steam rooms, there is also a rooftop panorama pool that overlooks the Danube. Rudas Baths have single-sex days during the week, but anyone can go at the weekend.

Veli Bej are another Turkish baths, boasting five thermal pools. The baths were renovated in 2011, but the original clay pipes are still used for pumping in the water. These baths are less well-known so are often less busy and crowded (as well as being cheaper) than some of the more popular baths. Facilities include pools of different temperatures, a steam room, a sauna with fresh ice, and an infrared sauna.

You can read more about our Budapest trip in these posts:

The guidebook which we used for this trip was the Top 10 Budapest DK Eyewitness Travel Guide. We stayed at the Danubius Hotel Gellért, and travelled with Wizz Air from London. Easyjet, British Airways and several other airlines also fly to Budapest direct from London. We used Skyscanner

to find our flights.

Have you been to any of Budapest’s thermal bath houses? Do you have any recommendations to add to the list?

Disclosure: I have nothing to disclose for this trip – this was a holiday, and we were not hosted anywhere. All words, opinions and images are my own and are independent. The post contains some affiliate links, which means that if you clicked through and bought something I would receive a small commission, at no cost to you.