Birmingham is Britain’s second largest city, and is currently going through a multi-million pound programme of renovation. The success of the BBC’s BAFTA-winning Peaky Blinders series (which is watched avidly in our house) is boosting visitor numbers to both Birmingham and to the West Midlands area. If you’re looking for a stylish, modern hotel in the city centre, I definitely recommend the Radisson Blu Birmingham*. I stayed there for one night with some of my fellow travel bloggers in order to review it. This is how it went. 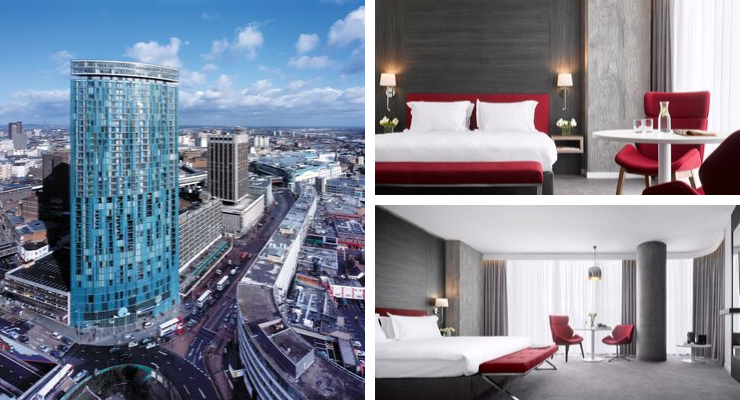 Arriving by train at New Street Station from London, I was amazed to find myself in the soaring atrium of Grand Central, a beautiful space which is a destination in itself. A five-minute stroll from the station through the Bullring, the city’s largest shopping centre, and along Smallbrook Queensway led me to the city’s Radisson Blu hotel.

The 39-story hotel has 211 rooms and suites. I stayed in room number 1403, a spacious suite with a city view. The decor was sleek and contemporary, with a palette of grey, black, red and white. Besides the master bedroom with en-suite bathroom, there was a separate living area (which can also be used as a bedroom), and a separate cloakroom. I loved the floor to ceiling windows along the whole of one wall, and I enjoyed seeing the sunset and sunrise from the room. At home we’re surrounded by woods and fields, and I found it fascinating to watch the bustle of the city streets far below my window. 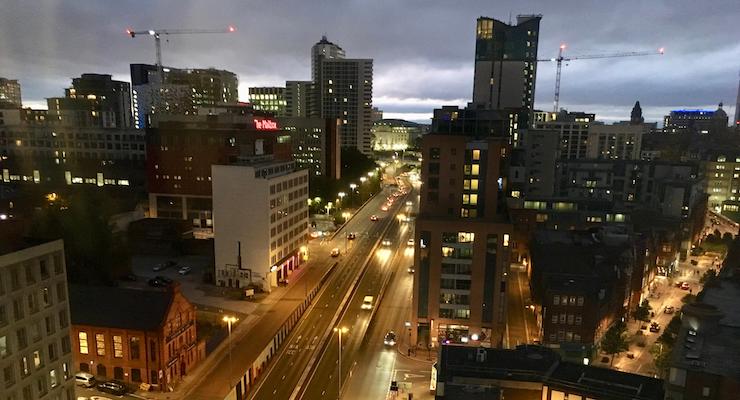 The room was very comfortable and well-equipped, and had everything that you’d expect in a four-star hotel. I was pleased to see that there were USB charging points next to the bed, so that I could easily charge my phone overnight and still use it as an alarm to wake me up in the morning. The in-room safe was big enough for my laptop to fit inside, which isn’t always the case. There were robes and slippers for guests to use. There was plenty of room in the bathroom, and it had a useful (for shortsighted people like me) magnifying mirror with a light, as well as the usual toiletries. 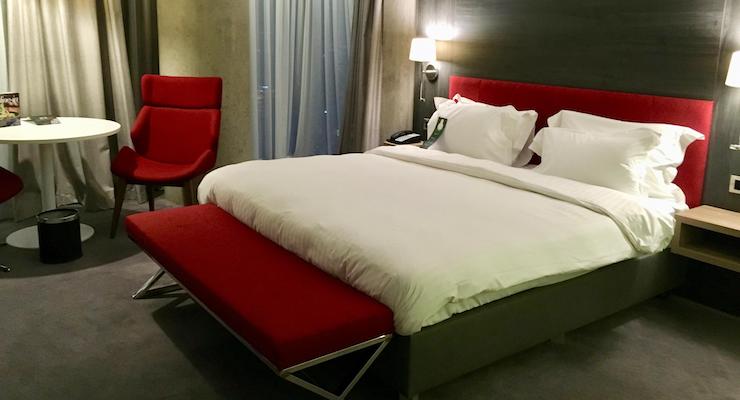 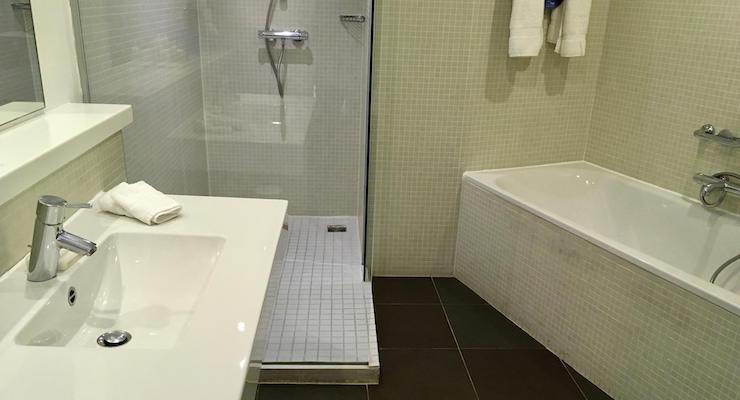 In the lounge, the Nespresso machine had decaff coffee (as well as coffee with caffeine), and there was a range of magazines to read and an interesting guidebook to Birmingham and the Black Country.

There are also standard, superior and premium rooms available at the hotel, as well as connected rooms for families. There was fast, free wifi in the room, as there was throughout the hotel.

We had dinner at the hotel’s Collage restaurant. At the entrance to the restaurant, next to the bar area, there were long sofas along one wall with bright, quirky cushions which popped with colour. We ate from the ‘inclusive menu’ which cost £19 for two courses, £24 for three. I had roasted pepper soup followed by beer-battered cod and chips, then chocolate fondant brownie with caramel pecan ice cream for dessert. My food was all very tasty – especially the brownie! There were only a few other diners in the restaurant with us, so it was a calm atmosphere and we had very good service. 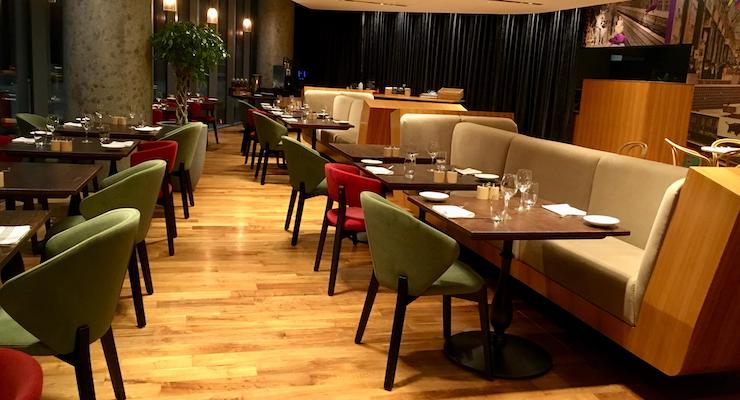 The following morning we were back at Collage bright and early. Radisson Hotel Group has partnered with nutritionist Sophie Bertrand to inspire guests to create a breakfast that suits them, whatever they have planned, and each day there are up to 100 different breakfast items available in the restaurant. Guests are welcome to ask for what they fancy if they don’t see it on the menu, and the chef will prepare it if they have the ingredients

There was table service as well as a self-service buffet area at one end of the restaurant, offering seemingly everything that you could want for breakfast. 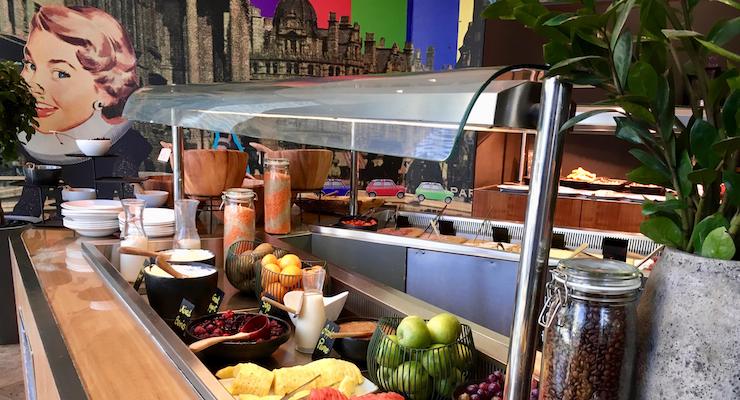 I don’t eat meat, and when I asked the waitress if I could have eggs benedict without the ham, she asked if there was anything else that I’d like instead. So my toasted muffin, poached egg and hollandaise sauce duly arrived with salmon, and it was delicious. 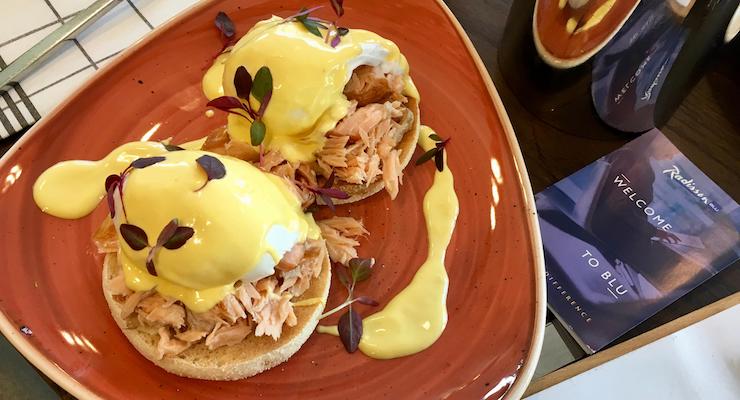 The waitress also brought me a pot of decaff coffee, and I had a bowl of fresh melon and grapes from the buffet. So I was well set up for the day.

The service from the helpful reception staff was excellent. When there was a slight mix up with our rooms we were offered a bottle of Prosecco to enjoy in the bar area while we waited for it to be sorted out. At the reception desk in the hotel lobby there’s a small area with still water, infused water, cookies and apples for guests to help themselves to. I really like and appreciate this kind of touch in hotels – it makes a place feel more welcoming. 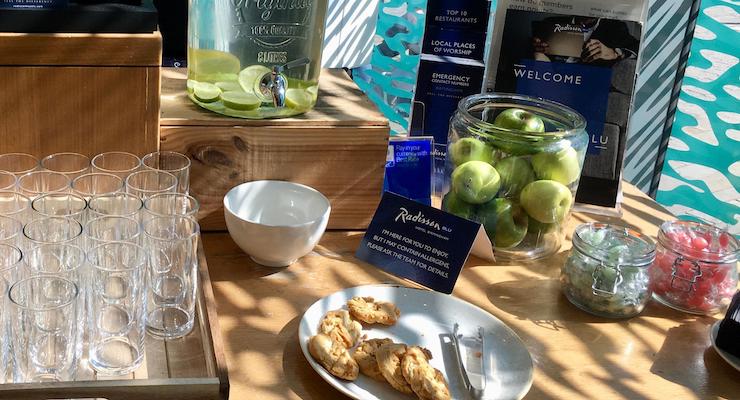 I didn’t get time to try it, but the hotel has a well-equipped gym on the 18th floor, with panoramic views across the city skyline. I popped in to have a quick look at it before breakfast, and there was nobody in there. 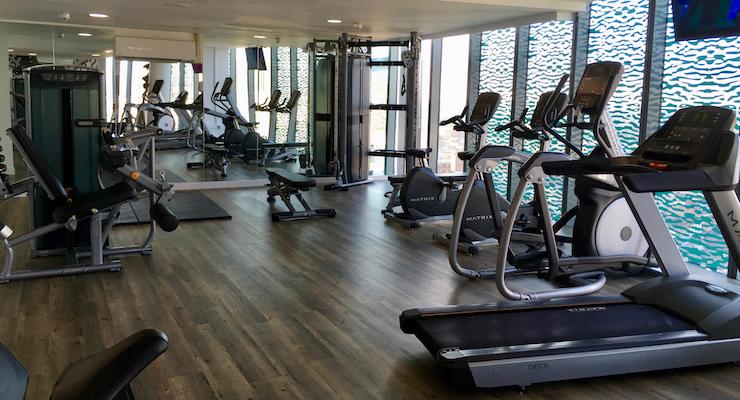 I enjoyed staying at the Radisson Blu Birmingham hotel and would definitely recommend it. It’s in a very convenient central location, it has everything that you need for a comfortable stay, and its breakfasts are excellent.

These posts are by some fellow travel bloggers who were at the hotel with me:

An overnight stay at Radisson Blu Birmingham by Ting Dalton of My Travel Monkey. 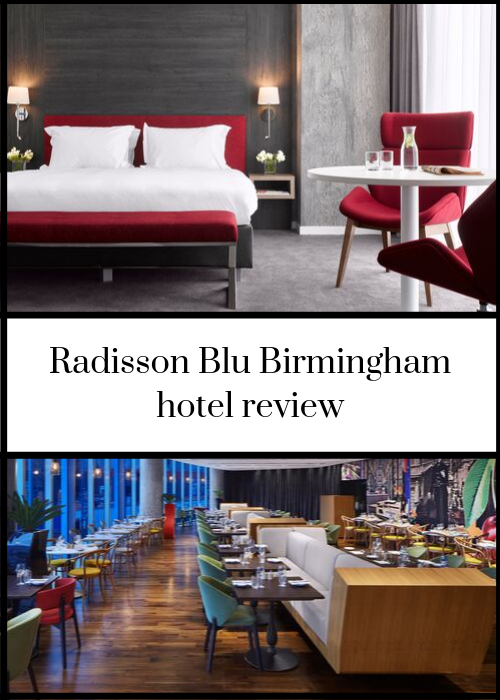 *Disclosure: I was hosted at the Radisson Blu Birmingham for one night on a B&B basis for the purposes of this review. All images (unless otherwise credited), opinions and words are my own and are completely independent, as ever.